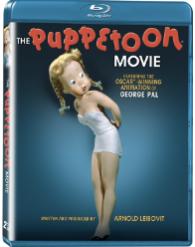 There's a good chance that had it not been for Academy Award-winning animator/filmmaker George Pal, and his efforts in the '30s and '40s in the realm of stop-motion animation, other filmmakers might never have been turned on to the style, and audiences everywhere would have been left without such recent endeavors as 'The Nightmare Before Christmas,' 'The Fantastic Mr. Fox,' and 'Frankenweenie.' But much more catastrophic, there may have never been the Rankin/Bass Christmas films, or Aardman Studios, or even Gumby.

Pal's efforts were largely pioneering in the world of stop motion animation, and his being considered a peer to Walt Disney certainly stands as proof to the contributions he made to the medium, and how it could be used to tell familiar stories in a new and completely unique fashion. The shorts that are collected on 'The Puppetoon Movie,' the 1987 pseudo-tribute to Pal by filmmaker Arnold Leibovit, demonstrate the level of mastery Pal had achieved in working as a filmmaker and an animator, and, as Leibovit would put it in the documentary 'The Fantasy Film Worlds of George Pal,' the famed animator was also "The father of science fiction in modern film."

Now that's certainly a bold statement, but in addition to Pal's many contributions to the world of the fantastical through his use of stop-motion animation, he also served as a producer on films like the 1950 adaptation of Robert Heinlein's 'Destination Moon' and the 1953 version of H.G. Wells' 'The War of the Worlds.' Seven years later, Pal would become the director of another Wells adaptation with 'The Time Machine.' And while these were certainly monumental films at the time – inspiring everyone from George Lucas, to Steven Spielberg, and even Tim Burton – it was Pal's amazing, and amazingly complex "Color cartoons in three dimensions" that arguably earned him the reputation as an innovator with a wild imagination that he is still remember for (in animation circles, largely) today.


And with the Blu-ray release of 'The Puppetoon Movie,' the adoration and acknowledgment that Leibovit extended to Pal in 1987 is taken a step further, as this release is not only a restoration of the movie that celebrated Pal's work and efforts in the field of stop-motion animation, but it also acts as a kind of archive, granting anyone access to so many of his beloved Puppetoons shorts, interviews with fellow artists who were inspired by him like Wah Chang, Ray Harryhausen, and even Ray Bradbury; all in one comprehensive package. And while seeing Pal's adaptations of Dr. Seuss' stories, 'And to Think That I Saw it on Mulberry Street' and 'The 500 Hats of Bartholomew Cubbins,' or the unfortunate time capsule of racial stereotypes that are so abundant in the Jasper series of shorts, the star of the disc is of course Lebovit's film, which lovingly compiles over an hour's worth of Pal's Puppetoon shorts, set against the backdrop of a fictional movie being made by Gumby, Pokey, and Arnie the Dinosaur – all of whom, as the film alludes, at least partially owe their existence to Pal's work decades earlier.

Aside from the Gumby framing device, 'The Puppetoon Movie' has no central story or driving narrative; it presents itself as a series of vignettes sometimes loosely related in theme, and sometimes not related at all. In essence, the conceit of the movie is to showcase the many different genres Pal was capable of working with during his many years as an animator. In each vignette, viewers are treated to a wide variety of models – or Puppetoons – that range in detail from strangely lifelike (with a disconcerting hint of uncanny valley), to unique in both their design's efficiency and simplicity. Some of the characters Pal created, like the aforementioned Jasper, but also Tubby the Tuba, Sergeant Jan, Jim Dandy, Little Rusty, and Mr. Strauss became indelibly linked to his vision and the word "Puppetoon." (Most of the creations are on display during Lebovit's movie, while others appear as supplements on the disc.)

If the idea of vignettes and animated shorts reminds you of Disney's 'Fantasia,' then you're not far off. Even though many of the shorts presented here were not necessarily created with the intention of being compiled into a single feature film, Lebovit plainly saw the value of Pal's work for not only its contributions to the world of animation, but also for its use of music, which itself acts as a kind bridge, linking some of the shorts together by sound. Several of the shorts presented in the film, or as a supplement on the disc, are set entirely around music – both instrumental and with lyrics – typically demonstrating Pal's remarkable use of sound to enhance or help progress the story. The stories here are not outright musicals, most exist somewhere in between, reliant on the musical elements almost as much as the visuals to properly convey the emotions and sentiments intended by the story.

And while many of these shorts are amazing for their artistry, and imagination, the work of Pal, and, to an extent, 'The Puppetoon Movie' has aged in a manner that's entirely different from other classics in the world of animation. For one thing, even though he was a great influence on many well-known names, George Pal isn't likely as well known as, say, Walt Disney, or folks like Harryhausen. Furthermore, a great deal of these Puppetoon shorts and the film itself requires the audience to look at it in the context of the era in which it was made and initially presented. That means both the 1930s, as well as the late 1980s. And while many great films require an audience to do the same, Pal's Puppetoons – especially those in the Jasper series – will be asking quite a lot of modern audiences. Yes, there is still plenty packed away in the film and the supplemental features of this disc to amaze animation fans, but the value of the painstaking effort and tremendous imagination put into Pal's creations may be lost on those weaned solely on the fast-paced, CGI-driven animated world of today

If anything, 'The Puppetoon Movie' stands as both a time capsule of a bygone era and an appreciation of a true innovator, whose tremendous efforts paved the way for a litany of animated films and special effects that would change the way many people saw and thought of movies. In that sense, this disc set is far more important than the movie whose title is emblazoned on the front. This is essentially an archive of one man's tremendous contribution to both the animation and the filmmaking world, making it both uniquely enlightening and exceedingly nostalgic at the same time.

'The Puppetoon Movie' comes as a two-disc set – the feature disc being a 50GB and the supplement disc being a 25GB – with a three-page foldout pamphlet detailing the career of George Pal. There are no previews on either disc, but each one is packed with special features. The first disc alone includes 'The Puppetoon Movie' as well as 19 Puppetoon shorts, a 90-minute documentary, trailers and interviews. Disc 2 includes the feature film 'The Great Rupert,' as well as some terrific interviews and some behind-the-scenes footage of Pal at work many decades ago.

'The Puppetoons Movie' has been restored and is presented in a nice-looking 1080p AVC-MPEG-4 encoded transfer that is delivered in the original aspect ratio of 1.33:1. The image is bright and colorful, and affords a tremendous amount of detail on a film mostly comprised of shorts that were many decades old by the time it was made. The biggest improvement on the image has to be in the clarity and brightness, which have been augmented dramatically. Many of these shorts (as you'll likely see when viewing the standard definition versions of the supplemental shorts) suffer from poor contrast levels, where the blacks bleed into the image, soaking up a tremendous amount of detail and making the image itself generally difficult to see. Here, that is not the case; the image is clear, with fantastically high levels of contrast, producing an image where detail remains high, even in low light sequences.

There is a good amount of texture and detail to be seen in many of these Puppetoons, and the image here does a fine job of bringing all of that out, for what may be the first time since these shorts were originally seen. There is a surprising absence of harsh grain on the disc, which is likely the most pleasant surprise offered by this release. There is, of course, plenty of grain to be had, but none of it is obtrusive, or detracts from the overall quality of the image. The image isn't perfect, by any means – it is, after all, a product many decades old – but it does look very nice. The passage of time has been kind to many of these Puppetoon shorts, making the restoration process here a case of augmenting a decent image to begin with.

'The Puppetoon Movie' has been given a DTS-HD Master Audio 4.0 mix (which may exist elsewhere, but it's the first one I've encountered) that gives the film quality audio that may not have necessarily been needed, but is certainly appreciated. For the most part, the sound is front loaded, and occasionally seeps into the rear channel speakers, but not often. As most of the shorts are musically quite heavy, they don’t require a great deal of balance between the music and things like, say, dialogue, or sound effects – though there are plenty of both for the listener to enjoy. But both of these elements feel secondary to the music, and for good reason. Voices can be somewhat tinny, or a little hollow at times – which his likely a product of the initial recording – and sound effects tend to ring a little lower than anything else on the mix. It's not terribly detrimental to the overall quality of the mix, but it is noticeable from time to time.

Although the mix presents the music of these shorts with crisp detail and sometimes resonant power, there's not much else going on. Even the dialogue of the commentary is a little low at time, but still manages to present a clean, sound that's easy to enjoy. Overall, this is a good mix that represents many old recordings quite well.

This portion of the disc includes some tremendous interviews with filmmaking folks who were touched by Pal's work in some form or another. Highlights here include an extensive interview with special effects icon Ray Harryhausen, and an insightful piece featuring 'Star Trek' creator Gene Roddenberry.

As presented by B2MP, 'The Puppetoon Movie' Blu-ray is far more than a high-definition release of a 1987 film celebrating a somewhat forgotten animator from the '30s and '40s; it is an impressive celebration of the life and career of George Pal, and the many creations he so brilliantly envisioned. This is the kind of disc set that more than makes up for its price tag, and is a must own for any animation fan. The movie itself has undergone a tremendous restoration, but the real reason to own this set is the wonderfully fascinating special features included on both discs. Not only do you get many other Puppetoon shorts and the feature film 'The Great Rupert,' but also the interviews with fellow animators, filmmakers, and writers are simply wonderful additions that will enlighten anyone who has ever had an interest in George Pal or the world of stop-motion animation. This one is highly recommended.

List Price $49.98
Go To Store
See what people are saying about this story or others
See Comments in Forum
Previous Next
Pre-Orders
Tomorrow's latest releases