Judy Garland doesn’t sing at all in The Clock, but her nuanced performance in this sensitive World War II romance is so good, you won’t miss her vocals one bit. The tale of a young GI (Robert Walker) who falls in love with a charming city girl during his 48-hour furlough in Manhattan brims with honest emotion and delivers a hopeful message about fate and faith. Warner Archive’s terrific remastered transfer vastly improves upon the previous DVD, as does the lossless audio track. The Clock may not rank as one of Garland’s or director Vincente Minnelli’s best-known films, but this simple, involving, and affecting drama tugs the heartstrings and stands the test of time. Highly Recommended.

Judy Garland, the premier musical star of Hollywood’s Golden Age, appeared in 33 feature films between 1936 and 1963, but in only two of them does she not sing a single note. Judgment at Nuremberg is one, and The Clock, a beautifully made, often unheralded film directed with nuance and sensitivity by her soon-to-be husband Vincente Minnelli, is the other. An achingly tender, understated World War II romance, The Clock showcases Garland’s sizable dramatic talent, which is just as big as her inimitable and exceptional singing voice. Though the lyrical script by Robert Nathan (Portrait of Jennie, The Bishop's Wife) gives her only one brief emotional scene, Garland’s enviable ability to bring meaning and authenticity to the mundane makes her quiet work here rival her raw, powerful, Oscar-nominated portrayals in A Star Is Born and Judgment at Nuremberg.

On its surface, The Clock, an adaptation of a short story by Paul Gallico (who years later would pen The Poseidon Adventure) and his wife Pauline, resembles countless other wartime romances, but in Minnelli’s artistic hands it becomes a resonant tale that brims with humanity, atmosphere, and honest emotion. Few films of the period exude as much warmth or feel as natural, and such elusive elements help The Clock strike a universal chord and keep it - pardon the pun - timeless. 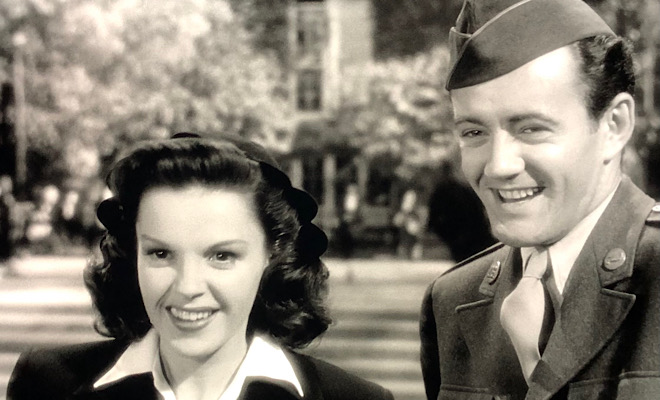 Garland plays Alice, a typical New York City working girl who trips over the outstretched feet of Joe (Robert Walker), a lonely, naïve GI on a 48-hour furlough, while exiting Penn Station. Intimidated by the bustle and girth of the Big Apple's concrete landscape (and instantly smitten with Alice), country boy Joe persuades his wary acquaintance to let him tag along with her as she makes her way home. After a stroll through Central Park, they wander through the Metropolitan Museum of Art and begin to connect, finding common ground as they casually discuss their backgrounds and dreams. A dinner date ensues, which leads to a tentative romance and a series of both comic and frantic adventures, all of which convince the couple they're destined to be together. Complicating matters are Joe's expiring leave and looming overseas deployment, both of which ramp up the intensity of their relationship and force them to assess an uncertain future.

Fate is a typical love story theme, but few films embrace it as fully (or put such a positive spin on the concept) as The Clock. Whereas many movie couples find themselves star-crossed, the constellations align for Alice and Joe, who draw strength from the conviction their union has been preordained. The gods may test their love, but the two believe if they keep their faith, even a horrific world war won’t dash the happy life together that surely lies ahead. Such a spiritual bent sets the film apart from traditional romantic yarns, and though some might find the heavenly choir accompanying the couple's first kiss a bit hokey, the emotions Garland and Walker convey remain true, and make us ponder whether outside forces really do play a part in shaping our lives.

The Clock is also unique in the way its setting influences the characters and drives the plot. Most romances toss a jealous boyfriend or "other woman" into the mix to cause trouble, but Minnelli - in an inspired move - casts New York City in that pivotal role, constructing the film so the massive metropolis both benevolently unites and cruelly divides Alice and Joe. Its urban pulse underscores every scene - a notable feat, considering The Clock was produced entirely at the MGM studios in Hollywood. Seamless rear projection work, along with meticulous re-creations of various landmarks (Penn Station chief among them) lend the movie its pungent New York flavor and trick even savvy viewers into believing it was all shot on location. 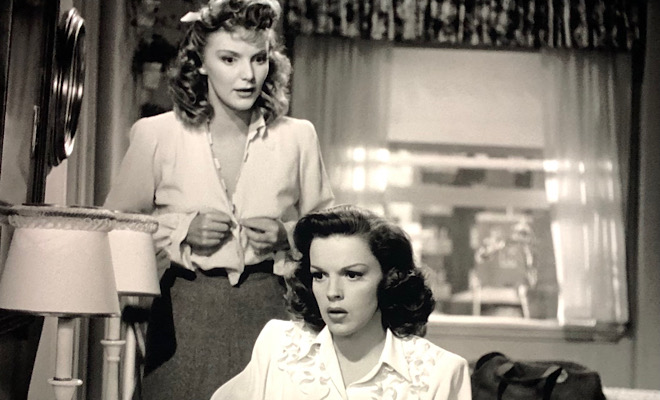 Although it's a stretch to compare this gentle movie to that classic high-octane TV show 24, the two possess one key similarity. Both employ the clock as a villain - a cold, unforgiving entity that can't be eluded, beaten back, or ignored - and use it to create a sense of urgency and dread. Alice and Joe may not be racing against time to save the world á la Jack Bauer, but with the uncertainty of war and its potentially dire consequences swirling about them, their plight seems almost as desperate.

Minnelli, too, seems mindful of the constant ticking and is careful not to waste a moment of film. "Clocking" in at a mere 90 minutes, The Clock tells its story economically and without pretense, often using light-hearted, slice-of-life vignettes to subtly strengthen the couple's bond. As a result, the relationship develops smoothly and naturally, and despite the constricted time frame, we never question its depth or truth.

The Clock's success hinges on the performances of Garland and Walker, and both contribute excellent work. Garland's palpable warmth, sincerity, and quiet confidence allow her to project both strength and vulnerability, while her radiant smile, infectious laugh, and genuine empathy make it easy to see why Joe would become so quickly enamored of her. Walker brings just the right mix of boyish wonder and manly consideration to his "green as grass" character, at first playing up Joe's golly-gee-whiz attitude and puppy-dog demeanor, but as the picture progresses, he drops such affectations and files a mature and moving portrayal. 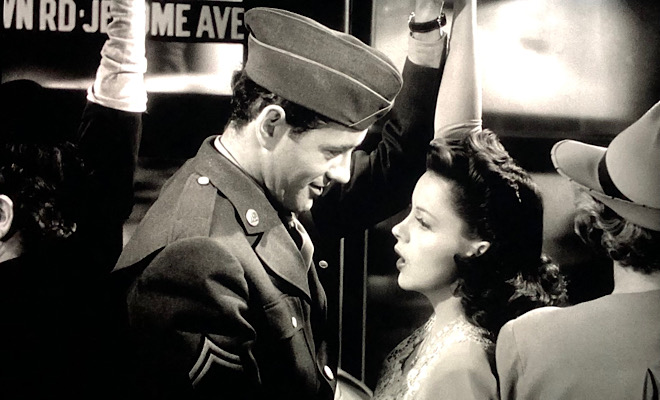 The two create palpable chemistry and make a believable couple, yet as much as their fine performances rivet our attention, no discussion of The Clock would be complete without acknowledging the character actors who add priceless bits of quirky human comedy to the film. Keenan Wynn plays a pontificating drunk to perfection; Marshall Thompson utters only one word, but invariably grabs the movie's biggest laugh; and real-life marrieds James and Lucile Gleason shine as a down-to-earth blue-collar couple who teach Alice and Joe all they need to know about love and devotion. Without them, and a host of other unbilled actors (including Angela Lansbury's mother, Moyna MacGill, as an outrageously prim diner patron), The Clock would be a very different and less satisfying film.

Most wartime romances tilt toward tragedy, but The Clock delivers a hopeful, uplifting message that surely soothed and bolstered World War II audiences and still resonates during today’s tough times. Though it may not possess the same cachet as Minnelli’s award-winning musicals and melodramas, it remains a very special film in the canons of both Minnelli and Garland, who fell in love while making it. If you admire either artist, you must make time for The Clock.

Vital Disc Stats: The Blu-ray
The Clock arrives on Blu-ray packaged in a standard case. Video codec is 1080p/AVC MPEG-4 and audio is DTS-HD Master Audio 2.0 mono. Once the disc is inserted into the player, the static menu with music immediately pops up; no previews or promos precede it.

The DVD transfer of The Clock was a huge disappointment that failed to meet Warner’s usual high standards by a wide margin, but all is forgiven 15 years later. A brand new master struck from a 4K scan of the best surviving protection elements yields the glorious transfer The Clock has always deserved. Excellent clarity and contrast distinguish the 1080p/AVC MPEG-4 rendering that faithfully honors George Folsey’s lovely black-and-white cinematography. Well-resolved grain lends the picture an attractive sheen without sacrificing the feel of film, and a nicely varied grayscale enhances details.

Much of The Clock takes place at night, but superior shadow delineation keeps crush at bay most of the time. (The DVD often looks downright muddy and gloomy by comparison.) Blacks are rich, whites are bright yet never bloom, and sharp close-ups highlight Garland’s silky complexion and lend Walker a more natural, rugged appearance than in previous home video versions. A couple of shots still look a tad fuzzy (the softness most likely is baked into the source), but thankfully all the myriad nicks and blemishes that plagued the DVD have been erased. The clean image is a joy to behold and it transforms The Clock from an ugly DVD duckling into a beautiful Blu-ray swan. An upgrade is absolutely essential for anyone who loves this wonderful film.

The DTS-HD Master Audio 2.0 mono track provides a nice upgrade over the lossy DVD audio. Though a volume boost is still needed to reach an acceptable listening level and a faint bit of surface noise can be detected during a couple of quiet scenes, the sound quality is clear and vibrant. The atmospheric cityscape noises - the rattle of the subway, honking car horns, rumbling engines, and the general din of train stations - come through cleanly and sonic accents like the barking Central Park seals, tire blowout, and collapse of the pinball machine are crisp. A wide dynamic scale handles all the sweeping highs and lows of George Bassman’s beautiful score without a hint of distortion (although I wish just a tad more fidelity were present to maximize its impact), and all the dialogue is well prioritized and easy to comprehend.

All the supplements from the 2007 DVD have been ported over to this Blu-ray release.

Vintage Short: Hollywood Scout (SD, 7 minutes) - This entry in the long-running Pete Smith Specialty series chronicles a day in the life of an animal talent scout, and features acrobatic dogs and a frisky bear performing a variety of impressive tricks.

Vintage Radio Adaptation (47 minutes) - A Lux Radio Theatre adaptation of The Clock from early 1946 pairs Garland with John Hodiak (her co-star in The Harvey Girls), and though it's a treat to hear Judy reprise her film role, the story doesn't translate well to the audio medium. Without visuals, the New York atmosphere is largely lost and because so much of the drama's emotion is conveyed without dialogue, it's difficult to believe the intensity of the couple's burgeoning love. In addition, the bland Hodiak can't muster the youthful charm and sincerity that make the character of Joe so affecting and are such vital elements of Walker's portrayal.

If you haven't yet discovered The Clock, it's high time. Other wartime romances may possess more drama and passion, but few can match the heart and soul of this sweet, uplifting film. Garland and Walker embody young love and craft sensitive portrayals that rank among the best of their careers, while Minnelli’s top-notch direction thrusts us into the bustling atmosphere of mid-20th century New York City. This tender love story at last gets the transfer it has long deserved, thanks to a new 4K remaster culled from the best surviving protection elements. Add solid audio and all the supplements from the 2007 DVD and you’ve got a stellar Blu-ray presentation of an often overlooked, but utterly captivating film. Highly Recommended.