For Me and My Gal

Warner Archive celebrates the Judy Garland centennial with the long-awaited Blu-ray release of one of the beloved star’s best musicals. For Me and My Gal not only showcases Garland’s dazzling triple-threat talents, it also marks the auspicious film debut of Gene Kelly. The two icons make beautiful music together in director Busby Berkeley’s heartfelt salute to vaudeville that now looks and sounds like a million bucks, thanks to a new 4K remaster culled from the best surviving protection elements and terrific lossless audio. All the marvelous supplements from the 2004 DVD complete this impressive Blu-ray release that’s a must-have for any fan of Garland, Kelly, and Golden Age MGM musicals. Highly Recommended.

Busby Berkeley directed some of Hollywood’s most opulent and ambitious musicals, yet he consistently named the modest For Me and My Gal as his favorite of all his films. This nostalgic, unabashedly sentimental, yet terrifically entertaining salute to vaudeville during World War I might seem like an odd choice from the man who turned movie musicals into kaleidoscopic fantasies and revolutionized the art form with innovative camera angles and boundless imagination, but it turns out the slave-driving "Buzz," as he was affectionately dubbed, was deep down an old softie, and none of his movies mirrored his own life as closely as For Me and My Gal.

Berkeley, however, wasn't the only member of the company with a vaudeville background. The woman who portrays one of the title roles also knew a thing or two about the circuit. Rumored to have been "born in a trunk," Judy Garland lived the vagabond vaudeville life since she was old enough to toddle onto the stage at age 2. She was just 19, but already a seasoned veteran when she began shooting For Me and My Gal, the first picture that would give her solo billing above the title. 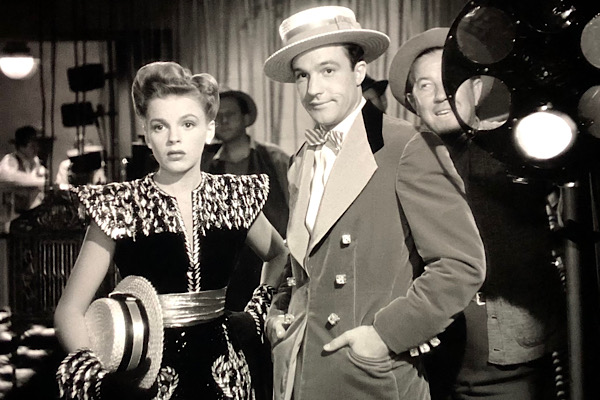 Such an honor, though, would not be the musical's only notable first. For Me and My Gal also marks the screen debut of 30-year-old Gene Kelly, who was originally signed to play the second (and far less interesting) male lead. Days before production commenced, however, Kelly switched roles with leading man George Murphy, and a major career was born. As the lovable heel who woos, wins, loses, and must fight to reclaim Garland, Kelly proved he was much more than a Broadway hoofer, and his magnetic personality, athletic dancing, and palpable chemistry with Garland made him an instant star.

Although his character - who bears more than a passing resemblance to the cad he portrayed in the original stage production of Pal Joey - remains largely unlikable for most of the film, Kelly's charm wins us over. He plays Harry Palmer, an opportunistic song-and-dance man willing to claw his way to fame at any cost. His life's ambition is to perform at that towering vaudeville temple, New York's Palace Theater, and when he meets starry-eyed singer Jo Hayden (Garland) during a two-bit engagement in Iowa in the winter of 1916, he believes he's found his ticket to the top. Harry's smooth lines and slick finagling don't impress the down-to-earth Jo, but she finds herself attracted to Harry nonetheless, and the two team up when Jo's act fizzles. 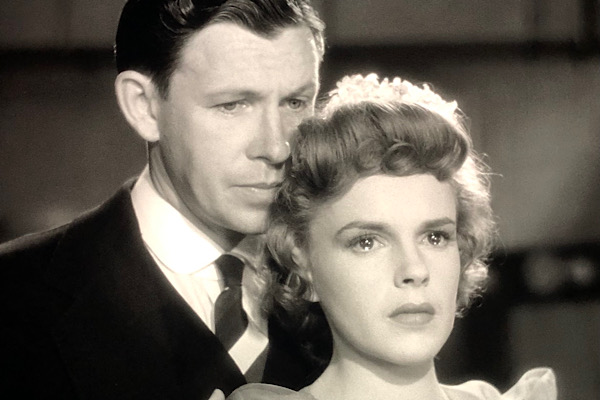 The duo struggles both professionally and personally at first, but just when their relationship gets on the right track and a scout from the Palace offers them a gig, Harry receives a draft notice. Determined to postpone his service until he can play the Palace, Harry engineers an "accident" that keeps him out of the army, but in the process destroys his dream, his relationship with Jo, and his self-respect.

The film's strong dramatic focus makes it unique among 1940s musicals, which usually offered featherweight escapism for weary World War II audiences. Although For Me and My Gal takes place during World War I, it struck a chord with 1942 viewers, bolstering morale and instilling hope that America could weather its current war and emerge victorious. Today, some might call the plot timeworn, hokey, and predictable, but despite a few dated elements, For Me and My Gal remains emotionally affecting due to the sincerity and professionalism of its stars. 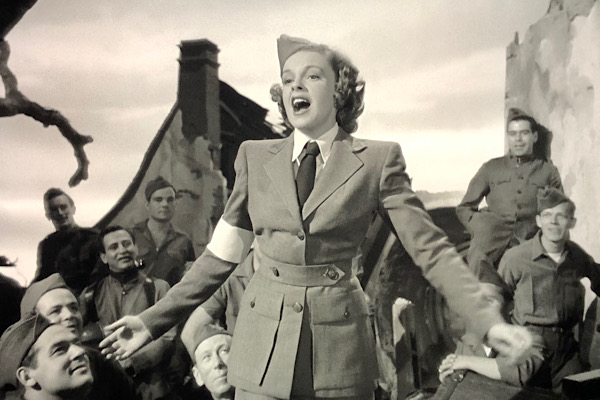 Also unlike other big-budget musicals of its time, no bloated production numbers bog down the story. True to the spirit of vaudeville, what we get is meat-and-potatoes singing and dancing without the clutter of chorus girls and moving set pieces. Thanks to the simple staging, nothing distracts us from the electric energy of Garland and Kelly, who perform a host of traditional World War I tunes, as well as a classic rendition of the title song and a zippy little ditty called “Ballin' the Jack” (see video clip below). Garland also sends chills up the spine with the torchy “After You've Gone,” which would later become a staple in her concert repertoire, and rips through the rousing “How Ya Gonna Keep 'Em Down on the Farm” to a cheering throng of American GIs. Their frenzied reaction at the song's conclusion provides a glimpse of the unrestrained audience hysteria that would distinguish many of Garland's concert performances after she left MGM.

Often dubbed the silver screen's original "triple threat girl," Garland could act, sing, and dance with equal aplomb, and For Me and My Gal showcases her talent in all three disciplines to a greater degree than perhaps any other film. As the sole star, Garland must do it all, and she handles the heavy responsibility of "carrying" a major motion picture with ease. The movie also offered Garland her first truly mature role, as well as the chance to step out from behind Mickey Rooney's shadow. She makes the most of both opportunities, and her unqualified success hastened her breezy transition to adult stardom.

A tender, tuneful romance with more heart than most '40s musicals, For Me and My Gal evokes the essence of a bygone era and reminds us once again why Judy Garland was one of the greatest talents ever to grace the screen. Her work here ranks among her very best, and remains as fresh and exciting as it must have seemed 80 years ago. After all, they didn't call her the “World’s Greatest Entertainer” for nothing. 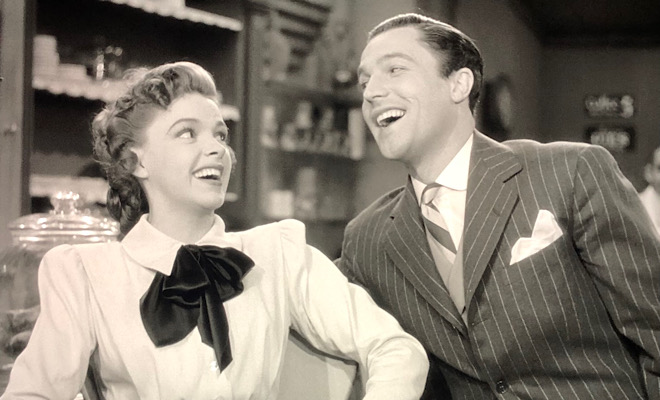 Vital Disc Stats: The Blu-ray
For Me and My Gal arrives on Blu-ray packaged in a standard case. Video codec is 1080p/AVC MPEG-4 and audio is DTS-HD Master Audio 2.0 mono. Once the disc is inserted into the player, the static menu with music immediately pops up; no previews or promos precede it.

The 2004 DVD looked mighty nice, but Warner Archive ups the ante for the Blu-ray presentation of For Me and My Gal with a glorious 1080p/AVC MPEG-4 transfer struck from a new 4K scan of the best surviving protection elements. Superior clarity allows us to drink in all the period details and costume textures, while excellent contrast heightens depth and beautifully resolved grain lends the picture a palpable film-like feel. Rich blacks, bright and stable whites, and nicely varied grays combine to produce a vibrant image, while sharp close-ups highlight fine facial features, the residue of Garland’s tears on Kelly’s cheek, and a bit of glistening sweat. The mild speckling that plagued the DVD has been erased, leaving a pristine print that will delight fans of this effervescent musical. (Note: The blurring across the bodice of opera singer Marta Eggerth's dress during her solo is not a transfer defect or artistic effect, but rather a mandated masking of her cleavage, which was deemed too revealing by those enforcing the Motion Picture Production Code.)

The DTS-HD Master Audio 2.0 mono track noticeably improves upon the problematic DVD audio, eliminating all the hiss that plagued the previous lossy track. Garland’s vocals are clearer and crisper, and the musical numbers enjoy a modest volume and fidelity boost that pumps up the excitement quotient. The orchestrations sound rich and robust, the war effects exude a healthy bass presence, and subtle atmospherics make a more distinct statement. All the dialogue is well prioritized and easy to comprehend, and no pops, crackle, or distortion intrude.

All the terrific supplements from the 2004 DVD have been ported over to this Blu-ray release. If you’re a Garland fan, it’s quite a bounty.

Judy Garland's finest black-and-white musical beautifully showcases its beloved star's triple-threat talents. Garland shines in her first grown-up role, and in his film debut, Kelly instantly proves he's a worthy rival to Astaire. Together they ignite the screen and make this love letter to vaudeville an enduring classic. A superb transfer struck from a 4K scan of the best surviving protection elements, vibrant lossless audio, and all the bountiful extras from the 2004 DVD distinguish Warner Archive’s superior, long-awaited Blu-ray presentation of For Me and My Gal, which definitely merits an upgrade. Highly Recommended.