The Wrath of Vajra

In 1930s Japan, a death cult working with the Imperial Army buys children and trains them as deadly assassins. When 8-year-old Vajrasattva accidentally kills his own brother in a fight for food, he makes a secret oath to take revenge. As an adult, he emerges as the cult's best assassin, returning to China where he joins the Southern Shaolin Temple to protect his people from Japanese invaders. When the death cult opens a branch in China and starts buying local children, he sets out to save them and avenge his brother. But first he must defeat their three greatest warriors in a battle to the death. Starring former Shaolin monk and martial arts action star Xing Yu ('Shaolin,' 'Ip Man'), Steve Yoo ('Man of Tai Chi'), Poppin Hyun-Joon ('Fly, Daddy, Fly'), Jiang Baocheng ('Legendary Assassin') and newcomer Ya Mei.

Making a kung fu movie must be a lot like engaging an opponent with kung fu: the quality of the kung fu, in many ways, is the beginning and the end of the conversation. Whatever else is built up around the flying fists and bone-crunching kicks can generally be perceived as secondary. While that might be questionable depending on which kung fu movie is actually being discussed, it's a fairly accurate estimation of the pecking order in which 'The Wrath of Vajra' places any element outside of the maniacally fast-paced, truly hard-hitting, and impressively choreographed fight sequences making up this simple-minded, brutal slugfest.

Set in China around WWII, 'The Wrath of Vajra' puts an assertive spin on the notion of the tournament film by featuring fight scenes that are a spectacular mix of the fantastical (there's significant wire work and the suggestion of supernatural elements at play) and the inescapably real (actors/fighters often make contact with their opponents and many of the stunts require trained professionals to perform such acts as diving headfirst down a flight of concrete stairs). The film's primary protagonist, who is known only as K-29 (played by former Shaolin monk Xing Yu), returns to challenge the sadistic Hades cult that turned him into a highly skilled assassin, after the group kidnaps several young children from his temple and the surrounding area, in order to transform them as they once did him.

There are suggestions of a long-running governmental conspiracy when the Hades cult is essentially reopened after the Emperor had ordered it closed for being too brutal, but like almost everything else begging for explanation in this film, the idea of larger forces at play are simply there to get the ball rolling. The important takeaway is that with Hades back in the ugly business of turning kids into killers, K-29, along with American military man Bill (another victim of the pre-war Hades cult indoctrination program) and a handful of P.O.W.s will have to fight their way through the Hades death tournament if they want to live, and, more importantly, if they want to prevent the kidnapped children from being forced to kill for the Hades cult. 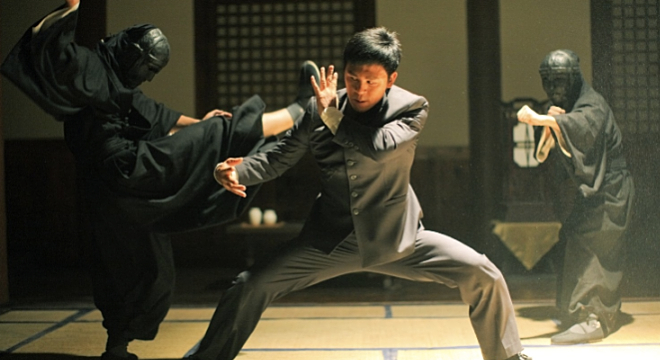 The tournament is set up as a three-round battle to the death against the leaders of the clans within the Hades cult. There's the (roughly) 7-foot tall Tetsumaku Rai (Baocheng Jiang) – the leader of the Violence clan, then there is Crazy Monkey (Heon Jun Nam) – leader of the Zombie clan, and finally there is Daisuke Kurashiga (Steve Yoo) – otherwise known as K-28, acting head of the Hades cult. Unsurprisingly, K-29 and K-28 share more than just numerical proximity; they were both indoctrinated into the cult at a young age, and have since found themselves traveling very different paths. While K-28 became Hades' go-to guy for killing folks with his bare hands, K-29 went to live a life of reflection, after he inadvertently killed his older brother during a training exercise long ago.

The extent to which 'Wrath of Vajra' attempts to build a compelling story around its characters is admirable, as the basic conceit of the film essentially avoids the need for one. This is a hard-and-fast martial arts film that adequately establishes its protagonist's motivation early on and gives him a unique group of adversaries against whom he must test himself. And yet, despite having a strong, grasp on the fundamentals of a violent martial arts movie, the film insists on being more than it needs to be. The only problem is, there is simply no room for nuance; not that a movie like this needs it, but since it insists on telling a larger story than your average tournament film, a few shades beyond simple black and white could have made a difference. Instead, the audience is left with two silly, one-dimensional ideologies battling one another.

Director Law Wing-cheong eats up too much time by inserting a superfluous backstory for too many of his characters, when that time would have been better spent further developing the aura of evil around the Hades cult, as well as generating a driving force with more originality and excitement than the standard precious-child-in-peril scenario. It's another prime example of a movie tripping over its own script. Not only is the storyline more convoluted and reliant on coincidence than it needs to be, but the interplay between the various characters serves as a constant reminder that, while hiring the most capable martial artists in the world helps to deliver amazing and convincing fight sequences, it doesn’t necessarily afford the film the kind of performances outside the fisticuffs that 'The Wrath of Vajra' wants to have on display.

That imbalance between story and the action on-screen is what ultimately does 'Wrath of Vajra' in. Normally, swinging for a homerun and whiffing is admirable, but only when there's sense of where such ambition could have ultimately taken the film. Here, there is a terrific, sometimes gorgeously made martial arts film with a narrative that too often gets in the way for no good reason. Come for the spectacular action, but leave your expectation of there being a worthwhile story at the door. 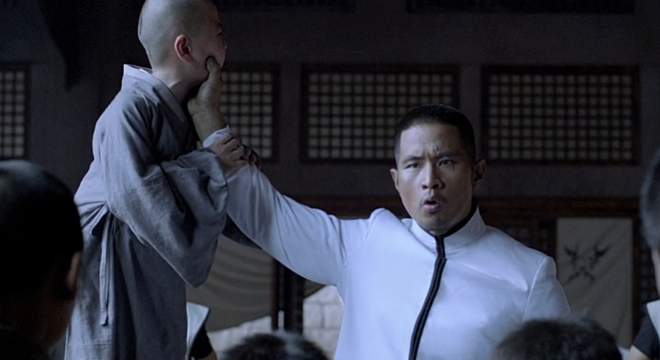 'Wrath of Vajra' comes from Well Go USA Entertainment as a single, 50GB disc in the standard keepcase. The disc contains the standard Well Go Entertainment promo, along with several previews for upcoming releases. There is also a paper insert advertising several films.

The 1080p AVC/MPEG-4 encoded transfer is bright, clean, crisp, and free of any noise on-screen anywhere. As a whole, the image contains a tremendous amount of fine detail throughout, which nicely plays up facial features and textures. This effect works quite well during the extreme slo-mo shots of combatants taking a fist or a foot to the face. Costume design is fairly standard throughout, but there is plenty of texture to be found amongst the various characters' wardrobes. For the most part, texture is best presented in the enormous set that was built to represent the Hades temple. No detail was spared, it seems, and the image does a great job capturing them all on-screen.

Contrast remains high throughout, adding robust blacks to the nighttime fight sequence against Crazy Monkey, and during the sequences in which he attacks inmates unlucky enough to have entered his lair. Contrast is also high during the daytime scenes, keeping the image looking sharp and free of haze, or looking washed out. Elsewhere, the image is free of banding or crush, making the darker scenes register cleanly and with great depth. Colors could have been a little more vivid; the palette seems to lean more towards black, whites, and earthy greens, which certainly plays up the feel of he film, but they none look particularly striking.

The Mandarin DTS-HD Master Audio 5.1 track offers an immersive experience that encourages the audience to feel the fisticuffs, as much as it hears them. That means a tremendous (but never overwhelming) amount of LFE has been brought in to generate a more resonance from the many, many punches, kicks, and head butts 'The Wrath of Vajra' has up its sleeves. Along with the hefty impressive LFE, however, comes a well-balanced mix that highlights dialogue by pushing it through the center channel, while giving the score and the sound effects free range to play around with the front and rear channels.

Directionality and imaging work particularly well during the frenetic fight sequences, giving off a distinct sense of place and accuracy in terms of positioning the combatants that places the viewer right in the middle of the action. Rear channels work well to deliver smaller, atmospheric noises almost constantly, while also picking up extra elements to enhance the action driving most of the movie. All of these elements come together to generate a consistent, and impressive sounding mix that will likely please many fans of the genre.

'The Wrath of Vajra' will likely please fans of the martial arts genre, as it contains some fantastic fight sequences, the likes of which aren't seen very often. Added to the fact that the film also offers an interesting visual style, and some compelling cinematography, and you have the making of a fun kung fu flick. Had the filmmakers left it at that, the movie would have been far more successful than it is. Unfortunately, too much of the film is devoted to rote depictions of good vs. evil, and banal characterization that generates a noticeable disconnect from the engagement the energetic, unruly fisticuffs that propel most of the movie. Still, with great picture and audio, as well as an informative making of featurette, this kung fu flick is certainly worth a look.

Sale Price 17.49
List Price 20.54
Buy Now
3rd Party 14.43
In Stock.
See what people are saying about this story or others
See Comments in Forum
Previous Next
Pre-Orders
Tomorrow's latest releases