Challenging the linear narrative by weaving multiple story lines and exploring a directorial style way ahead of his time, Director Michelangelo Antonioni's unique triptych film, features three murders, one taking place in Paris, another in Rome, and another in London. All of the perpetrators are affluent youths, each killing for dubious motives. In the France segment, a group of adolescents kill for money, even though they don’t need it; in the London segment, a poet uncovers a woman’s body and tries to profit from the discovery; and in the Italian segment, a student becomes caught up in a smuggling ring, with deadly results. With elements that serve as a precursor to 'Blowup,' Antonioni explores how modern society can produce nihilistic tendencies in the least likely characters.

Marking his third-feature film after several years of documentary work but still a few years shy of making waves with 'Il Grido' and 'L'Avventura,' Michelangelo Antonioni's 'Il vinti' suffers to some degree from studio meddling. Due to the controversial subject matter depicting youth violence, Antonioni was forced by producers to make changes to a script he co-wrote with five other writers. Most notable are the prologue and epilogue sequences brazenly denouncing the lurid behavior, bookending what is essentially three loosely interrelated short films on contemporary adolescence. Although unnecessary, the segments are arguably a benefit to Antonioni's overall point by superfluously sensationalizing his themes and making audiences partially guilty for finding the stories entertaining.

The film's title already clues us to Antonioni's motives and intentions, though who exactly the words refer to is rather vague and, for me, definitely up for debate. In the original Italian, the words can mean either "the vanquished" or "the defeated," but they can also be interpreted as "the losers." Most immediate, the meaning applies to the young criminals, the first generation of teens to grow up in post-war Europe feeling estranged to their surroundings and society. They are the children of a bourgeoisie class whose condition has unwittingly created a state of apathy and purposelessness. To break from the monotony, they are lured by the excitement of breaking social norms, of seeking riches and a false sense of independence, and by the empty promises of notoriety.

Each of the three stories follow in that order, set in Rome, Paris, and London, with the last one probably being the most disturbing because it implies one final meaning to the title. On the one hand, "losers" applies to the criminals with disparaging disapproval while also sadly speaking to the victims for being on the losing end of the situation. But on the other, more poignant and incisive, hand, "vanquished" and "defeated" denotes subjugation, not only in the individual sense but as the social whole. The first two stories feature young adults committing crimes with the idea that their actions should produce immediate results. The final tale follows an aspiring poet suffering from delusions of grandeur, a confident young man convinced that sensationalizing murder is the quickest and easiest road to fame and fortune, which is all that matters in this modern world. 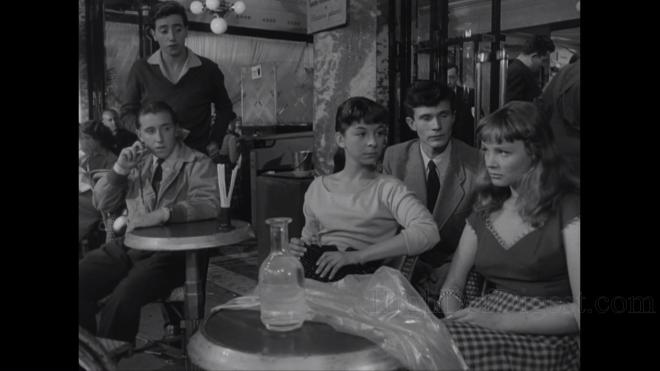 What makes this story the most disquieting of the three in 'The Vanquished' is Peter Reynolds's performance as Aubrey, who is indifferent and emotionally detached from his actions. It more clearly hints at the overarching theme when the man is eventually granted his desires, but it more importantly says something about us as a society, one which remains as affective and perceptive as ever. Arguably more accessible and routine than his later films, Michelangelo Antonioni nonetheless directs each of the lurid tales with a style that's uniquely his own. With cinematographer Enzo Serafin, the legendary filmmaker uses a neo-realist approach that also feels lyrical and rhythmic, making the stories both tragically pathetic and disturbingly genuine, an existential portrait that still says as much about contemporary culture as it did in 1953.

Raro Video brings 'The Vanquished' to Blu-ray on a Region Free, BD25 disc inside the standard blue keepcase. Along with a cardboard slipcover, the package includes an 8-page booklet with an informative essay on the production history by film historian and author Stefania Parigi. At startup, the disc goes straight to a main menu with full-motion clips and music.

Antonioni's classic melodrama opens with white text explaining that the 1080p/AVC MPEG-4 encode (1.37:1) was made from three sources, presumably to provide the best possible presentation. The first is the original 35mm camera negative while the other is the release print from the 1953 Venice Film Festival, and the last one is another release print on loan from the Experimental Cinematography Center.

Whatever the reasons for this, the end result is an excellent, nicely-detailed high-def transfer with sharp definition and outstanding resolution. Granted, there are a few scenes which are noticeably blurrier than others, but overall, the elements appear to be in superb condition, exposing plenty of lifelike textures in the faces. Words on signs and bottles are distinct, individual bricks are distinguishable from each other, and the stitching on clothing is clear-cut and plain. Contrast is well-balanced with terrific visibility in the distance and clean, brilliant whites. Dee, rich blacks never obscure the finer details in shadows and provide good dimensionality.

Aside from the usual culprits, like very minor scratches, negligible vertical lines and forgivable bits of dirt and white specks, the film looks fantastic.

Along with an excellent video, Raro Video brings the film home with two listening options, both in uncompressed PCM 2.0 mono: the Italian dub and the original mix of Italian, French and English. Being the intended sound design that was shown theatrically in 1953, I opted for the latter, which exhibits a strong, engaging presence. Filled with plenty of appreciable activity in the background, imaging feels broad and welcoming, generating a very pleasing soundfield. The jazz-like music of Giovanni Fusco shows distinct clarity and separation in the orchestration, but sadly, that's where the many of the positives end.

The lossless mix also comes with a dynamic range that's largely flat and limited acoustics. Several sequences tend to sound bright and jarringly high-pitched, and the low-end appears to be altogether missing, making the presentation all the flatter and slightly dull. Although mostly clean and well-prioritized, vocals nonetheless seem distant, hollow and canned while hissing and bits of noise are also evident throughout.

'The Vanquished' is Michelangelo Antonioni's sensational melodrama about youth violence which also functions as an existential portrait about modern bourgeoisie culture. Astonishingly, the lyrical, neo-realist drama remains as poignant and affective as ever, in spite of the studio interference. The Blu-ray from Raro Video arrives with surprisingly good picture quality and a strong audio presentation. With a nice, welcomed collection of supplements, the overall package is definitely one for fans of Antonioni and Italian cinema, but neophytes should give it a watch.

Sale Price 25.99
Buy Now
3rd Party 22.65
In Stock.
See what people are saying about this story or others
See Comments in Forum
Previous Next
Pre-Orders
Tomorrow's latest releases