Framed for a dramatic assassination at the end of Season Three, the rogue Nikita (Maggie Q) now finds herself alone and on the run as a wanted woman. In trying to clear her name, Nikita is unexpectedly reunited with her old team: Michael (Shane West), her ex-fiancé and the man who trained her; Alex (Lyndsy Fonseca), her former protégé; anarchist hacker and tech specialist Birkoff (Aaron Stanford); and ex-CIA analyst Ryan (Noah Bean). Sam (Devon Sawa), the Division agent formerly known as Owen, remains a wild card. Nikita and her allies must get past their emotional wounds to take down their nemesis Amanda (Melinda Clarke), discovering in the process a larger conspiracy... one that could lead to a global catastrophe.

It was 24 years ago that Tchéky Karyo first yelled the name "Nikita" and an unlikely franchise was born. Following a Bridget Fonda-led American remake a few years later and a 'La Femme Nikita' television series that aired for five seasons in syndication, The CW kicked off their own version starring Maggie Q that expanded upon the 'Nikita' universe in a surprisingly entertaining, quasi-sci-fi fashion. And while it fit into the younger-skewing network's demographic, featuring a cast of mostly well-known actors that included Shane West, Devon Sawa, and Lyndsy Fonseca, the series only managed to do three seasons and some change. That change, of course, is in reference to the conciliatory six-episode fourth season that closed the story of criminal-turned-assassin Nikita Mears (or at least this iteration of her) once and for all.

Six episodes isn't much, and it certainly feels more like the network short-changed the series, but in reality, the shorter nature of the fourth and final season worked to the overall advantage of 'Nikita' in a way that a full season of might not have. As many are quite aware, The CW is like most other networks, in that television seasons still run the usual 22-23 episodes, meaning the writers are often tasked with producing a number of filler episodes that bridge the gap between plot centric bits that further the story of the season. While this can sometimes afford a series the chance to breathe and explore characters, more often than not it just winds up spinning the wheels until the real story can begin. In that sense, the final six episodes of 'Nikita' are the exact opposite: the narrative is far more focused and streamlined, demonstrating how shorter seasons and limited series often provide superior story lines that aren't bloated with filler.

As for what the six episodes are all about, one need look no further than the cliffhanger that brought season 3 to an end. In the closing moments of 'Til Death Do Us Part,' Nikita had been framed for the assassination of President Kathleen Spencer (Michelle Nolden) – who actually committed suicide. On the run and suddenly the most wanted woman in the world, Nikita ditched her former Division comrades, Alex (Fonseca), Seymour "Nerd" Birkhoff (Aaron Stanford), Ryan Fletcher (Noah Bean), and Michael (West) to ensure their safety now that she was such an important target. Complicating matters was the fact that she and Michael had become lovers and were contemplating marriage, when she vanished without a trace. 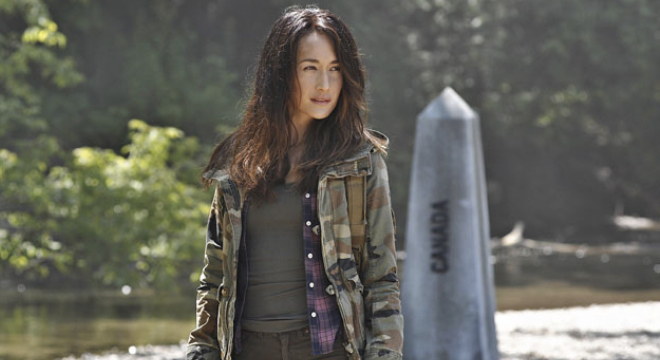 Now, as far as final acts go, attempting to disprove the overwhelming evidence that Nikita assassinated the president is some tenth-level 'Fugitive' stuff, and precisely the kind of insanely high-stakes, conspiracy-laden operation the series prides itself in telling without a hint of irony.  So, when season 4 kicks off with the aptly titled 'Wanted,' it finds Nikita re-entering the United States after spending months on the run, while a massive task force is launched to track down the frustratingly elusive target.

The swiftness of the six-episodes manages to bring all the major players back into the spotlight, each in their own story lines that all tangentially tie back into the major thread of clearing Nikita's name. But they also factor in taking down the villainous Amanda (Melinda Clarke) and Philip Jones (David S. Lee), who are doing the very villain-like thing of attempting to start WWIII in order to profit from the sale of weapons and machinery, which is one of the many aspects controlled by the illuminati-like group of rich white men that Philip belongs to. Of course, things are far more personal for Amanda, given the time she spent transforming Nikita from a drug-addled cop killer into a highly skilled and sophisticated assassin, and this aspect delivers a surprisingly robust emotional thread to the conclusion of the series.

To the writers' credit, the first half of the season adequately balances the larger plot with the overall series narrative that is Nikita's journey from the lowest of the low, to the defender of the world. It's a giant leap, but the series has had plenty of time setting it up, so the notion only strains credulity outside the realm of the 'Nikita' universe, because the inside is now dealing with the creation of brainwashed duplicates intended to replace world leaders and give the secret society unfettered control of the world.

Still, with that much plot going on, the show doesn't have much time to focus on the interpersonal relationships, so everyone is basically paired off, meaning Nikita and Michael try to mend their broken love life, while Alex and Owen/Sam (Sawa) essentially find themselves falling for one another – because why not? – while poor Noah Bean is stuck having an intellectual relationship with a piece of plexiglass and some light sensitive markers. Meanwhile, since Lyndie Greenwood had been cast in FOX's surprisingly superb 'Sleepy Hollow,' apparently her availability was cut short, because the romance her character Sonya and Birkhoff began in season 3 is barely mentioned. Instead, the show gives Birkhoff's origin a strange last minute retcon with Judd Nelson playing an integral part as a man named Ronal Peller. It is admittedly ridiculous, but perhaps no more so than Michael's carbon fiber hand.

So, is season 4 everything fans of 'Nikita' were hoping for? Well, there's a good chance that it is, considering they should probably count themselves lucky they got anything at all. The final six episodes essentially boil the series down to its essence: A fast-paced, entertainingly convoluted series about secret government agencies and the ridiculously attractive people that somehow managed to find employment with them. Pretty stuff blowing other stuff up, that's the show in a nutshell, and the series' final six hours has plenty of both. 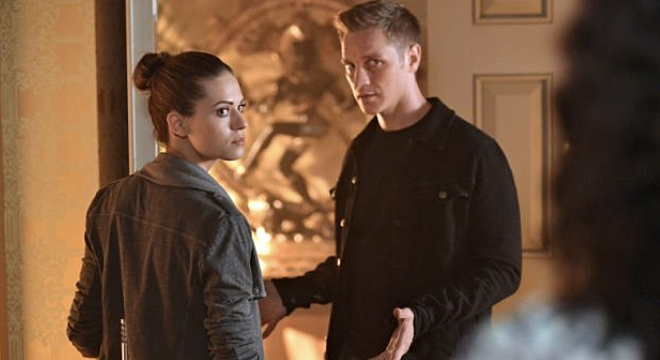 'Nikita: The Complete Fourth and Final Season' comes as a single 50GB Blu-ray disc + digital download in the standard keepcase. Just so it doesn't look too out of place with the previous three seasons, the keepcase comes inside a similar cardboard slipcover.

'Nikita' comes with a very nice looking 1080p AVC/MPEG-4 encoded transfer that is consistently bright and detailed, sending the show out in style. Surprisingly, the image exceeds the level of clarity and detail that was seen in the season three release, offering a more consistently crisp picture throughout. Along with the sharpness, the image offers a strong sense of color in every episode that his heightened by the warmth of the atmosphere – which is surprising given the show's tone. There is also a high level of contrast that gives sharp, defining edges in darkness, but also offers white levels that are never blown out or overwhelming. This seems to enhance the already high levels of fine detail and texture, making them stand out all the more during close ups.

There are times when the image's clarity works to the disadvantage of the CGI special effects, which wind up looking very clunky and probably expose more about the show's per-episode effects budget than anyone likely intended. Thankfully, most other effects are restricted to an explosion here or there and about 3,000 or so squibs on the bodies of those unlucky enough to catch a bullet in the show's many shootouts.

Overall, this is an impressive image that surpasses the season before with a greater attention to clarity and detail.

Unlike the image, the DTS-HD Master Audio 5.1 mix does not sound any different from the mix on season 3 – and that’s a good thing. The mix here delivers the same robust sound that highlights the action with resonant explosions, immersive shoot-outs, and thunderous punches that sound like they could go through concrete. While this is an action series, and the mix has clearly been calibrated to accentuate that, the sound also does a great job in dividing its interests, so that the dialogue is given priority, no matter the scene. Along with that, the mix displays tremendous balance, as the effects and music often drop imperceptibly to accommodate the actors when need be.

For the most part, the dialogue is pushed through the center channel, but the mix exhibits nice directionality and imaging by placing voices elsewhere to create a sense of depth. That notion is heightened with the constant presence of atmospheric effects and ambient noises – like the aircraft transporting the team across the globe – that help create a solid, immersive listening experience.

This is a great sounding disc through and through, and the quality of the mix is finally matched by the image, making this the best looking and sounding season in the series.

'Nikita: The Complete Fourth and Final Season' does not contain any special features.

'La Femme Nikita' somehow became an incredibly successful series of remakes and re-imaginings, each with their own distinct character and tone. In its four seasons, 'Nikita' managed to define itself as a much larger, more imaginative version of the core idea, one that wasn't afraid to play with sci-fi tropes and crazy technology in order to tell its story. It could be more than a little hokey at times, and but even while being earnest, the show managed to be entertaining and always lively. Four seasons is a triumph for any series, and while season 4 was clearly truncated – which is noted by the dearth of extras here – it still managed to go out and finish its story, rather than leave everyone on a miserable cliffhanger. Thankfully, the image here is great, and so is the sound, making this one a great buy for fans looking to complete the series.

Sale Price 24.98
Buy Now
3rd Party 24.98
Usually ships within 6 to 10 days.
See what people are saying about this story or others
See Comments in Forum
Previous Next
Pre-Orders
Tomorrow's latest releases