A Touch of Sin

An angry miner revolts against the corruption of his village leaders. A migrant worker at home for the New Year discovers the infinite possibilities a firearm can offer. A pretty receptionist at a sauna is pushed to the limit when a rich client assaults her. A young factory worker goes from job to job trying to improve his lot in life. Four people, four different provinces. A reflection on contemporary China: that of an economic giant slowly being eroded by violence.

In some instances, social reflection comes by gazing through the lens of a culture seemingly besotted by a sudden, superficial prosperity. Writer-director Jia Zhangke contemplates this notion in 'A Touch of Sin,' his vast, sobering chronicle of greed, ambition, violence, and corruption in modern day China that casts shade on the country's recent and rapid economic growth, hinting at the always familiar systemic failure of ethics and moral decency in a time when there is tremendous capital to be gained.

Told in four distinct story arcs, 'A Touch of Sin' weaves its threads across the country, and through various socio-economic settings, putting each protagonist in circumstances that are disparate, yet similar enough they are able to dance around the same thematic structure. Opening the film is the story of Dahai (Wu Jian), a miner whose ceaseless haranguing of the corrupt individuals profiting from the sale of his village's mine makes him far more than a simple irritant. After Dahai is accosted for confronting the former villager who profited immensely from a backchannel deal that prevented the residents from seeing any revenue from the sale, he returns home with a faraway look in his eyes that soon informs the audience violence has become the only recourse.

Coming on the heels of that somber, brutal opening salvo, Zhangke sends his tale down an even darker path, following Zhou San (Baoquiang Wang), a stone-faced itinerant in a Chicago Bulls stocking cap, who values nothing more than the exultant rush he receives from firing his gun. San returns to his village to celebrate his mother's 70th birthday, and to see the girlfriend and child to whom he sends a percentage of his ill-gotten gains. After the laconic drifter fulfils his fatherly and sonly duties, his incomparable wanderlust soon takes over, and the diminutive predator is shown doing what he does best. Sans arc then bleeds seamlessly into a two-pronged segment featuring Xiao Yu (Tao Zhao), a young woman who has been involved with an older, married man for several years. Upon demanding he leave his wife, Xiao Yu suddenly finds herself adrift, briefly under siege by her former lover's wife and family, and finally pushed to the breaking point by an unruly client who first mistakes her for a sex worker, and then presumes the allure of money will effect the sudden and desired turn of occupation. 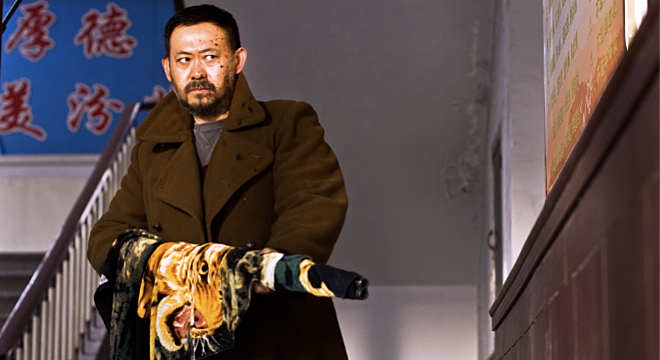 The fourth and final sequence revolves around a young factory worker named Xiao Hui (Lanshan Luo), whose experiences are wildly reminiscent of the previous three chapters, while building toward something more distinctly human that expands on the ethos of the film, as well as the culture that inspired the narratives. After being blamed for an on-the-job injury of a co-worker, Xiao Hui moves from one dehumanizing occupation to another, briefly finding a suitable position as a concierge at an upscale hotel specializing in the sex trade. There, he befriends and soon develops feelings for a young prostitute, who opens the young man's eyes to the reality of their shared situation, resulting in a kind of clarity that can only bring greater despondence.

'A Touch of Sin' counters what is an inimitably dour experience with a brief denouement that harbors a modicum of hope, while also questioning the call for reparation in a world beholden to the titular idea of sin. As the film suggests, beneath the monuments built to wealth and money are buried the individuals who ultimately hold little value in a culture that regards the wellbeing of others as a commodity to be traded and bought by those with the largest bank accounts. In that regard, Jia Zhangke challenges his audience to accept what the characters are doing by virtue of their circumstances; all the while asking the question: "Can evil be done for good reasons?"

The grand scale of the film parallels the breadth and depth of China, its provinces, and the country's culture, while at the same time depersonalizing each separate story in such a way it also reads as profound subtext to topic at hand. This augments a narrative already rife with an overwhelming sense of hopelessness and lack of control, which characters like Dahai, Xiao Yu, and especially Zhou San seize upon through the basest of human instincts: violent aggression.

As affecting and disturbing as each story is, the film relies on more than content to examine the themes at its core. Jia Zhangke frames his shots like his characters are regarded within their environments: from a distance. There are few close-ups in the movie, and the ones that are generated often fill the frame with faces spattered with blood, or focused on the semi-vacant eyes of an individual either lacking presence or desperately trying to escape the cruelty of reflecting upon his or her situation. Elsewhere, symbolism persists in the form of bright red apples, "holy snakes," and horses that overtly intone most individuals are just beasts of burden, yoked to a system that offers them nothing, only to be beaten by the cruel men who drive them.

'A Touch of Sin' walks a fine line with what could be thought of as an unsmiling drama or severe parable, but Zhengke successfully shepherds the audience through the rigors of his narrative and symbolism without devolving into distracting self-seriousness or cloying earnestness. Even the irony of a cramped factory-owned tenement being labeled "Oasis of Prosperity" registers more as a paradox than insincere mockery. The result, then, is a demonstrative and remarkably present film that engenders consideration for the human condition amongst a spate of change that is leaving too many behind. 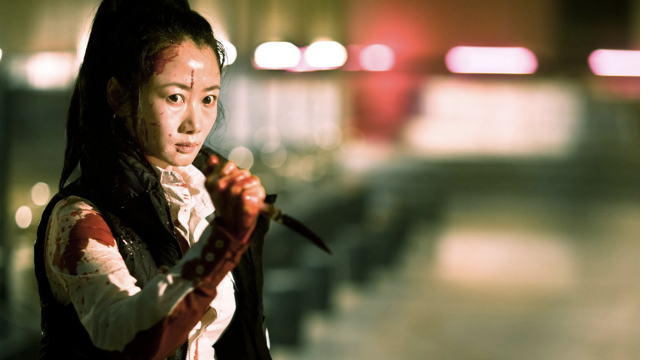 'A Touch of Sin' comes from Kino Lorber as a single 50GB Blu-ray disc. This is sadly a barebones edition that only contains previews for other Kino Lorber releases, which can be accessed through the top menu.

'A Touch of Sin' has been given a wonderful 1080p AVC/MPEG-4 encoded transfer that is diligent in its efforts to offer consistent levels of fine detail and texture. Facial features are well regarded here, as even the smallest of elements is on display in nearly every scene. Wrinkles, hairs, and imperfections are all on display, as are the textures in clothing and environments – which all adds to the ambiance of the film. These small elements all give a precise sense of place that highlights some of the conditions the characters find themselves in, balancing great beauty with the sullen eyesores of modern convenience. Adding to the image is a superb, but sedated color palette that renders most environments just a shade colder, and a might dustier than their real-life counterpart may actually be. This sense of heightened reality works to the film's benefit, giving a very staid yet life-like image a barely perceptible dreamlike quality. Contrast is also high throughout, registering full-bodied blacks that enhance the points of focus in and around them with sharp edges and spaces that are free of crush or any trace of banding whatsoever.

Overall, this is a great transfer that offers a tremendously detailed picture that still allows the artistry of the product to shine through.

The Mandarin and Cantonese DTS-HD Master Audio 5.1 mix provides a wide dynamic range that handles the simplest elements of the sound with the same kind of care afforded to the large, more bombastic moments that seemingly define the picture. Dialogue is well handled throughout, offering clear, crisp dialogue that co-exists with the other aspects of the mix quite well. Voices typically emanate from the center speaker, but there are plenty of instances where the rear channels assist when it comes to directionality and imaging. This gives the sound a great amount of depth most of the time, generating an immersive listening experience that integrates itself very well with the film's score and sound effects.

In that regard, sound effects are primarily natural; they work to generate a palpable sense of place that is heightened by the simple sounds of its natural atmosphere. Train stations pack as many additional elements as a busy road, or the bustling sounds of a small, rural village. Each one is completely different, but that distinction only enhances the effect of the mix. The score typically comes from the front right and left channel, giving it the kind of emotive impact it deserves – considering it is used so judiciously here.

In the end, the sound mix is very nice throughout, despite a few instances that surprise, if only for their lack of resonance when more was expected. Thankfully, this doesn't happen often and the result is, overall, very good.

Other Kino Lorber Releases (HD) A preview of other titles available from Kino Lorber.

A Touch of Sin' is the kind of richly detailed, nuanced film that most state-of-the-country films attempt, but never quite seem to achieve. Despite it's inherent bleakness which seems only interested in becoming bleaker, Jia Zhengke's masterful touch imbues the narrative and visual elements with a surprising liveliness that is impressively moving and prone to lingering long after the credits have rolled. Although the disc is free of supplemental material, the strength of the film itself, and the audio and visual components of the disc being as good as they are, this one comes highly recommended.

Sale Price 17.98
List Price 34.95
Buy Now
3rd Party 13.04
In Stock.
See what people are saying about this story or others
See Comments in Forum
Previous Next
Pre-Orders
Tomorrow's latest releases