Rip is a grappling star who is approached by Brell, the new head of the World Television Network. Brell wants Rip to wrestle on his network, but Rip insists on honoring his commitment to another outlet. Brell responds by launching a show called "Battle of the Tough Guys," in which the beefy regulars of a particularly rough drinking establishment fight each other on camera. Zeus soon emerges as the bad guy champion on this new show, and Brell uses Rip's friendship with his assistant Samantha to arrange a bout between Zeus and Rip. Rip is not at all interested until Zeus injures his brother and makes the fight a matter of personal pride.

In 1989, Hulk Hogan was approaching the zenith of his superstardom as a wrestler and media personality. It made sense, then, for those two aspects of the character to converge in a film that was as much about preserving Hulk Hogan's time in the spotlight, as it was marketing a string of matches the wrestler had against Tommy "Tiny" Lister, a.k.a. Zeus, the daunting foe he faces in the film. As part of a promotional strategy within the then named WWF, 'No Holds Barred' boasted plenty of appeal for an already established and fanatically loyal fanbase, but in terms of broadening the character and the company's audience – and potentially reaching an entirely new, even more lucrative demographic – the film's ultimate reach was probably as diminutive as Hogan's wrestling trunks.

Strangely, despite all outward appearances to the contrary, Hogan doesn't play Hulk Hogan in the film. Instead, he plays world-wrestling champion Rip Thomas, a man who lives in a strange alternate universe where a television executive named Brell – played by Kurt Fuller with as much over-the-top, mouth foaming bravado as any wrestler, in or out of the ring – is so desperate to sign Rip to his network, he resorts to having the famed wrestler attacked by thugs in a parking garage, engage in a long con with a PR specialist played by Joan Severance, and eventually host 'The Battle of the Tough Guys' competition, to lure Rip into a no holds barred (naturally) brawl that's ninety percent for profit, and ten percent for revenge.

On Hogan's end, 'No Holds Barred' meant delivering a take on his character that was overtly family friendly and inspirational, but with just a touch self-effacing humor thrown in to even things out. Early on, Rip joins Severance's Samantha Moore at a classy French restaurant, where an appropriately cartoonish waiter talks down to his colossal customer before learning Rip is not only a frequent patron, but also fluent in French (or he at least knows enough to embarrass a snooty waiter). The scene reads as a precursor to the string of Right Guard commercials Hogan would appear in just a few years later, spouting the phrase, "Anything else would be uncivilized." Meanwhile, the characterization of the sophisticated brute continues throughout the film, as Rip vacillates between two extremes: one being the guy who can burst through the sealed sunroof of a stretch limousine and pull the doors of their hinges, while the other was a kind, caring wall of muscle who would earnestly proclaim that two wrestling youngsters were "both winners," while refereeing a children's wrestling match for his charity. The result, then, was a film that features a lot more "believe in yourself" claptrap, than Big Boots, Irish Whips, and Leg Drops. 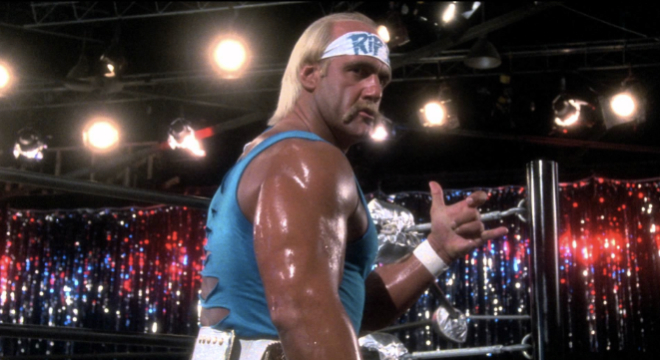 The film itself is by no means a wholly earnest endeavor, or, thankfully, an attempt at creating some inspirational sports story. In fact, the movie oddly offers as much screen time to setting up Brell's fury and his subsequent 'The Battle of the Tough Guys' television show, as it does Rip's storyline. Added to the mix, are two sycophantic underlings, Unger and Ordway, played with tremendous zeal by the always-entertaining David Paymer and less known Charles Levin, who often flank Fuller's mad television executive, while providing plenty of superficial laughs that are mostly at their expense. During a lengthy sequence set a local dive bar – that will eventually become the setting for Brell's show – Unger and Ordway take center stage in a strange comedy of manners, wherein their upper class leanings converge with the sleeveless, overweight, brown-toothed denizens who characterize the seedier side of the wrestling fanbase. The entire scene plays out like an early proof of concept for 'Frasier,' with Levin and Paymer serving as initial prototypes for the semi-effete, overly cultured characterizations that would define the careers of Kelsey Grammer and David Hyde Pierce.

That depiction sets out to demonstrate the two extremes that the WWF and 'No Holds Barred' clearly did not want representing Hulk Hogan and his legion of Hulkamaniacs. Instead, Rip's lovable trainer Charlie (Bill Henderson) and loyal little brother Randy (Mark Pellegrino) helped present the friendly, wholesome consistency of the character, suggesting a depiction that would help to further the mainstreaming of Hogan and cement his turn as a major pop culture icon. The effort also worked as a public relations venture for the culture of professional wrestling, one that saw its characters turn to violence only as a last resort, rather than the sole means of self-expression. To that end, the movie is adamant about portraying Rip as a turn-the-other cheek type of heroic archetype, rather than the kind of steroid-ridden, aggressive man-child his profession had a long since developed a reputation for producing. It's only when Randy is severely injured in an ill-advised confrontation with the psychotic Zeus, and later, when Samantha finds herself in the clutches of Brell and his henchmen, that Rip accepts the challenge and engages Zeus (and Brell) in physical combat.

Director Thomas J. Wright frequently showcases his subject within a gauzy frame, affording Rip a glowing allure that attempts to further distance him from the manufactured, in-your-face spectacle of the entertainment industry that birthed him. But in the end, 'No Holds Barred' is just trading one artificial element for another, and the narrative winds up giving in to its baser instincts in a surprisingly lethal final act that proves might makes right, so long as the mighty are overtly depicted as being somewhat virtuous. 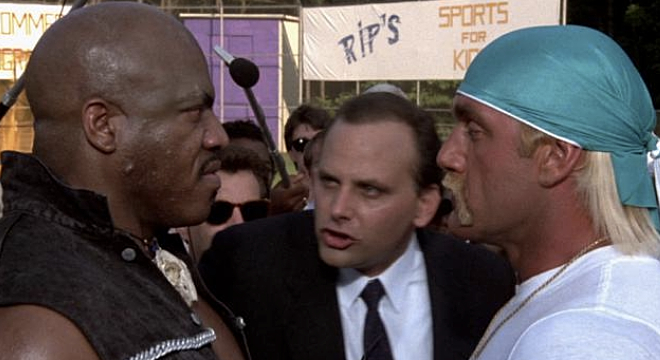 'No Holds Barred' comes from Image Entertainment as a 50GB Blu-ray disc in the standard keepcase. It features a substantial amount of previews for other WWE releases such as 'Reunion,' 'Legendary,' 'Bending the Rules' and 'Inside Out.' The disc also includes two wrestling matches from 1989, as well as a photo gallery.

WWE Studios proudly announces that 'No Holds Barred' has been digitally remastered at the top of the cover box, and the 1080p AVC/MPEG-4 encoded transfer of the film certainly offers the best looking version of the film that's likely been seen since it was in theaters. And while the HD upgrade certainly stands out, it's not without its faults. First and foremost, the image can be inconsistent in terms of contrast, as many early scenes tend to have a slightly washed out look to them. At first it seemed as though this was the result of the aforementioned gauziness that had been applied to certain scenes, but the effect is carried through to other portions of the film as well. On the plus side, when the contrast shifts, it changes the look of the entire film, presenting the almost 25-year-old film with a level of clarity that is quite impressive.

Although there are some small traces of grain, they only serve to give the picture a filmic quality throughout. The grain has no effect on the image, which is often filled with nice detail that goes beyond basic facial features and textures being put on display in close-up. When the contrast is at its highest, the image is filled with a great amount of fine detail that enriches the viewing experience. Additionally, the film is free from scratches, dust, or any noise that would negatively impact its presentation, or unnecessarily age the film. For the most part, colors are bright and true, though blues and whites tend to look a tad electric at times, while red can occasionally come off looking rusty or brown.

The overall quality of the image manages to outshine the inconsistencies in contrast and overly vibrant coloring, resulting in a very nice image that will likely please most fans.

The film has been given an upgrade to a DTS-HD Master Audio 5.1 mix that helps separate the individual components and highlights them in different ways. Dialogue is generally clean and easy to hear – though Lister's whispering of his characters name sometimes comes across as pitchy and a little garbled. Hogan, Fuller, Severance and the rest of the cast, however, are quite easily heard, and their voices remain consistent and clear throughout the film. Much of the dialogue is pushed through the center channel, though during the climactic fight, there are plenty of examples where the rear channels offer up a more dynamic, immersive experience.

Much of the music and sound effects are driven through the front right and left speakers, with the rear channels offering up some inconsistent atmospheric elements that really only shine toward the end of the movie. Balance is quite good, as dialogue, score, and sound effects all work harmoniously from start to finish, offering a nice equilibrium to the audio. LFE is present but fails to impress, as it seems to only be a factor in rare circumstances, and even then, nominally. Directionality and imaging are decent, offering some nice fluid transitions that match up well with the image on screen.

All in all, the mix here showcases the elements it needs to while proving to be surprisingly dynamic. It's not perfect, but it does offer more range and clarity than one might expect.

The film has plenty of intentional and unintentionally hilarious components that serve to make it a sometimes entertaining endeavor. Certain components work to send up the overblown personalities populating professional wrestling at the time, while others work to enforce their authenticity. Still, unbalanced and outlandish as the film is, it's difficult to resent any movie that encourages Kurt Fuller to yell "Jock ass!" at the top of his lungs, while also having the audacity to represent Rip Thomas as something of a Renaissance man who can pull car doors off with minimal effort. The transfer here is occasionally uneven, but still quite nice, and the sound offers a pleasant DTS upgrade. As the supplements suggest, however, this is niche film for a select audience that means it will likely be for fans only. Worth a look.