Take a moment and imagine what it would have been like if Steven Soderbergh had delivered 'The Limey' as a flaccid action flick with zero aesthetic value, bland characterization, and a story so slipshod it's nearly impossible to understand what's going on from one scene to the next, let alone muster up the will to care. Imagine this, and the end result will still likely be a more invigorating, exciting experience than anything presented in the resoundingly uninteresting feature 'The Outsider,' from writer-director Brian A. Miller.

From the first glimpse of its lackluster title, until the end credits roll, nothing much makes sense – and that goes double for the presence of its recognizable, but increasingly less noticeable cast, which includes Jason Patric, James Caan, and Shannon Elizabeth. This droopy, lifeless, quasi-revenge flick sees British mercenary Lex Walker (Craig Fairbrass) venture to Los Angeles, to track down the men he believes are responsible for the murder of his daughter Samantha. Not long after his plane touches down, Lex rustles up enough clues to point a brawny trigger finger toward Samantha's former boss Mr. Schuuster (James Caan) – a wealthy "cyber businessman," who is seemingly the only person not to have lost his shirt when the dotcom bubble burst. Naturally, being a man of many millions of dollars and the head of what seems to be a sizeable corporation, Schuuster operates at a villainous level that's outside the purview of the law. But that doesn't mean the law isn't looking into him.

Enter the completely unnecessary character of Detective Klein (Patric), who after catching the audience up to speed with regard to Samantha's supposed murder investigation – which is revealed early on to actually be a case of mistaken identity – practically drops off the face of the Earth. Meanwhile, Lex Walker is running amok in Los Angeles, brawling with members of Schuuster's security squad and promising a bartender named Margo (Elizabeth) $10k if she'll help him find the daughter he's now convinced is very much alive. 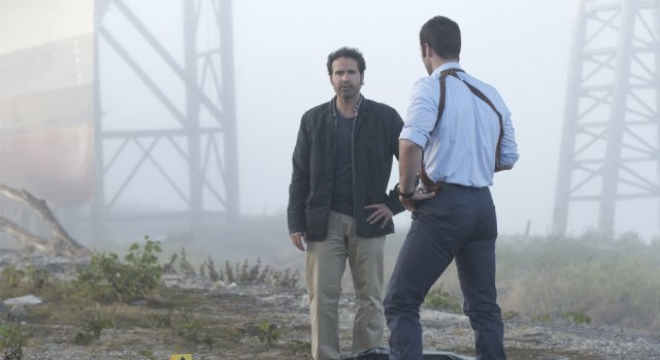 Soon after Margo's greed-fueled decision to join Walker's search for his daughter, she introduces Ricky (Johnny Messner), a greasy, pseudo-hipster bouncer who's tied to the truth behind Samantha's disappearance, and why Schuuster so desperately wants her dead. This revelation transforms the film from a run-of-the-mill revenge drama, to an insipidly plotted heist movie where the real Samantha (Melissa Ordway) and Ricky have somehow orchestrated a plot to bilk Schuuster out of millions of dollars, essentially using the same system of appropriating money in tiny, unnoticeable increments that was used in 'Office Space.'

For all intents and purposes, 'The Outsider' boasts the kind of plot that should have been fairly straightforward, allowing Walker to blow through L.A. like the Santa Ana winds during brushfire season, leaving destruction in his wake, while he pursues the truth. Instead, Miller's script gets in the way of its own plot at nearly every turn. Rather than have a single story progress logically from beginning to end, Miller incorporates as many storylines as possible, in order to create the semblance of a cohesive narrative structure with all sorts of unexpected twists and turns. But the subgenre hopping is done so haphazardly, and the twists handled with such dismally small amounts of nuance and subtlety, the transitions are more like the sputtering motions of some beat-up jalopy needing a push start in order to get the engine to turn over.

Moreover, this requires the characters to continually shift gears to accommodate the clunky narrative transitions. Thankfully, it's not too difficult, since Miller only imbues the characters with enough personality, motivation, and distinctiveness to fulfill the basic narrative requirement of any given scene. That may work on a scene-to-scene basis, but the lack of consistency from a character standpoint leaves the already disjointed storyline feeling even more amorphous and unformed. To combat this, 'The Outsider simply introduces more characters at random, generating more and more unnecessary plot-threads to resolve, while conversely leaving the film with fewer points of genuine significance. And for a movie that had the bare minimum of weight to begin with, cutting those points of interest out, and supplementing them with increasingly thin plot machinations takes the film well past the point of being tedious.

Just before it concludes, the film is seemingly hit with the sudden revelation that Jason Patric and James Caan are probably being paid for their services, thus requiring an excuse to have them somehow shoehorned into a tepid climax, involving a poorly edited shootout at Schuuster's faux palatial estate. This leads to an insipidly upbeat conclusion that suggests, of all things, Detective Klein and Walker somehow managed to exchange phone numbers in the midst of being shot at by Schuuster's goons, and that Margo finds the rampaging, single-mindedness of Lex Walker to be just the sort of thing that kicks off a deep, meaningful relationship.

One of the key takeaways from 'The Outsider' is that those with any kind of wealth generally believe they can do whatever they please, with little care for the damage that might be inflicted on others. It stands to reason, then, that producing this tedious exercise in cinematic violence required not only a similar pile of money, but also a comparably inconsiderate way of thinking. 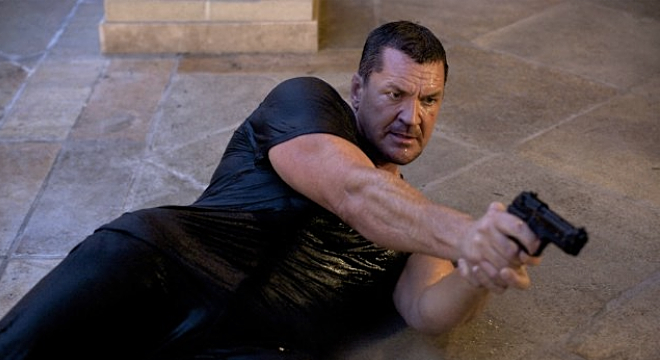 'The Outsider' comes from Image Entertainment as a single 25GB Blu-ray, in the standard keepcase. There are a handful of previews ahead of the top menu, but that is all this barebones disc has to offer.

'The Outsider' boasts a fairly standard-looking 1080p AVC/MPEG-4 encoded transfer that features plenty of nice detail, high levels of contrast, and a decent range of color, but still winds up looking flat and, sadly, sterile for the entire 94-minute runtime of the film.

As mentioned above, the detail here is actually quite good; the image manages to display many fine elements in facial features and textures in nearly every frame. Minute aspects like wrinkles, facial hair, and even clothing textures are all on display with great consistency. And with the high levels of contrast in the picture, the detail barely fades at all during nighttime sequences (which, to be fair, appear to have been shot on the well-lit streets of L.A.). Still, contrast remains high throughout, and there is no discernible evidence banding or crush present anywhere. Edges are crisp and well defined, giving the picture an even more detailed look. Adding to the already good image is the film's use of color. Although the palette is not necessarily rich, the image makes good use of certain elements like neon signs and the sprawling nighttime cityscape of Los Angeles to add some vibrancy to what would otherwise be a dull color offering.

The only downside is the same one that haunts so many low budget films shot on HD. There's little in the way of craft being presented here, and the overly sterile nature of the image serves as unflattering evidence of that. The image is pristine; it's true, but that only serves to make the whole thing look barren and, frankly, cheap. There's really nothing to complain about when it comes to the cleanliness of the image, but in terms of it looking rich, vibrant, and compelling, it's a toss up.

The DTS-HD Master Audio 5.1 mix checks off all the standard action movie boxes and comes away with a technically solid, but (like the image) emotionally unremarkable soundtrack. Voices are all clear, and dialogue is easily understood, but there's no resonance anywhere, characters all sound like their standing in an empty office space reciting their lines and having them looped back in. Lex sounds exactly the same whether he's barking at a crowd of onlookers in a bar, or walking down the runway of a small airport.

There's absolutely no nuance in the sound design. Most of the dialogue is delivered through the center channel speaker, which normally would afford the front right and left speakers the opportunity to handle the heavy lifting when it comes to sound effects and score, but here it all just kind of dribbles out. And although the mix manages to make gunshots ring out, and explosions carry a certain amount of LFE, it all sounds as though it's coming from the same place. It's not to say there isn't any sound, or that there are noticeable defects like scratches or hissing; it's that there's just no life or exuberance in the execution of it.

While technically, the mix may be find, there is an overwhelming flatness to the way it sounds that helps make an already bland picture even more tasteless.

'The Outsider' does not contain any supplemental features.

To say there's little to love about 'The Outsider' would be putting it mildly. This bland testosterone fueled descent into lackadaisical action nonsense doesn't merely underwhelm; it seems to actively seek out the most underwhelming aspects a film can have with laser-like precision. In fact, being underwhelming is the only thing this film manages to do with any real consistency. Half-baked characters, tumbling around an overwrought, overly complicated plot help make this 94-minute plunge into mind-numbing insipidness feel like the impetus of the film was to actually be an instruction on What Not to Do With your money if you're a producer. A good, but sterile picture and flat sound help push this one well into skip it territory.

Sale Price 7.96
Buy Now
3rd Party 1.99
In Stock.
See what people are saying about this story or others
See Comments in Forum
Previous Next
Pre-Orders
Tomorrow's latest releases