In the universe of alien and UFO encounters there are believers, skeptics, and non-believers. The documentary Love and Saucers chronicles the lifetime of intergalactic experiences encountered by one man - David Huggins. With the subject’s unflinching honesty and likability, Huggins might just make you a believer either with his story or his art. Terror Vision delivers a terrific Blu-ray release offering up an impressive A/V experience and loading the disc with interesting bonus features. Highly Recommended

Any fans of the X-Files, science fiction as a whole, or tune in to the History Channel on any regular basis is well aware of the subculture of people who profess to have had otherworldly encounters. There are a LOT of stories out there of people who have been abducted and experimented on - or who were treated with grace and curiosity like the little gray men in Close Encounters of the Third Kind. Then there are folks out there like New Jersey resident David Huggins who have had a lifetime of experiences with grays and a human/alien hybrid woman called Crescent whom he’s helped sire potentially hundreds of children with. 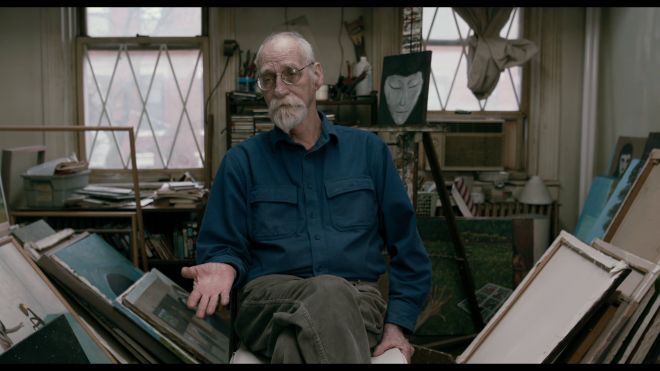 It’s not that he tells his story to anyone who listens, it’s that David paints his encounters in vivid detail that helps make his story particularly compelling. At 72 David is also unflappably likable. Director Brad Abrahams lets David tell his story honestly and without a filter or gimmicky graphics or cheesy recreations. I’ve spent more time than I’d care to honestly admit watching programs about alien encounters and meetings with Big Foot, but this is the first time watching something like this where you could actually possibly believe what David is saying - especially as he defends his art at a large gallery showing.

I guess in the pantheon of cryptid and alien encounter mythology you could call me a skeptic. I believe other civilizations on other planets exist and I believe it’s possible they’ve visited us, but I’m not 100% convinced it’s an active ongoing conspiracy. If for nothing else no one can answer the very simple question of “Why would they come here and do that?” But with every series on Last Podcast on the Left or alien abduction movie like the terrifying Fire in the Sky, I can’t help but be at least a little bit curious about the veracity of the claims presented. And David is a very compelling subject - in part because he’s so unassuming.

If you didn’t ask him about it, you’d never know that David claims to have had alien encounters virtually all of his life - including an ongoing sexual relationship with Crescent or that he’s fathered potentially hundreds of children. Love and Saucers absolutely falls on David’s side of things allowing him to have the first and final words, but at the same time, it leaves enough wiggle room for the skeptics to remain skeptical or the non-believers to assume this must be some form of mental illness.

As you watch this documentary be cautious about making assumptions because David isn’t your average crazy howling at the sky. His calm matter-of-fact demeanor is infectious. Also, I have mad respect for his incredible sci-fi/horror VHS collection. Because I’m curious I’ve heard and read a lot of stories involving alien encounters but Love and Saucers was the first time that I really felt like the person legitimately could have had these experiences. By nature, I’m still a skeptic, but David’s life is a compelling and fascinating case.

Vital Disc Stats: The Blu-ray
Love and Saucers lands on Blu-ray thanks to Terror Vision with a single-disc Blu-ray release. Pressed on a Region A BD-50 disc, the disc is housed in a clear case with reversible insert artwork. If you order from Vinegar Syndrome you can also pick up a slick exclusive slipcover. The disc loads to an animated main menu with basic navigation options. 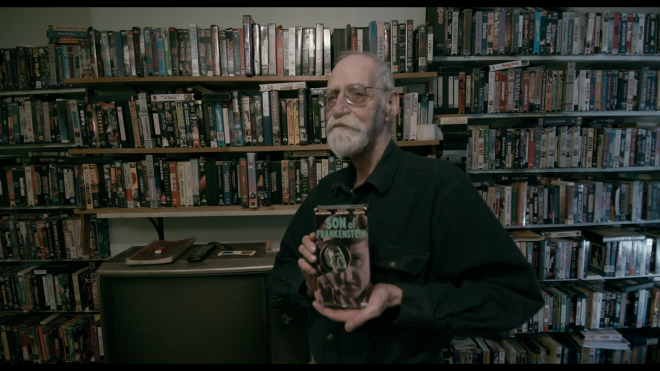 Love and Saucers arrives with a lovely 1.78:1 1080p transfer. Shot digitally this is a pretty standard documentary-style film with David nearly always the primary subject on screen. Details are clean and clear allowing you to fully take in David’s honest and simple appearance while appreciating his New Jersey home and video collection. This transfer also gives you a full appreciation of David’s numerous paintings with vivid colorful detail. Every brushstroke is apparent in these closeups. Colors are naturalistic with healthy skin tones and lovely primaries that are frequent highlights of David’s art. 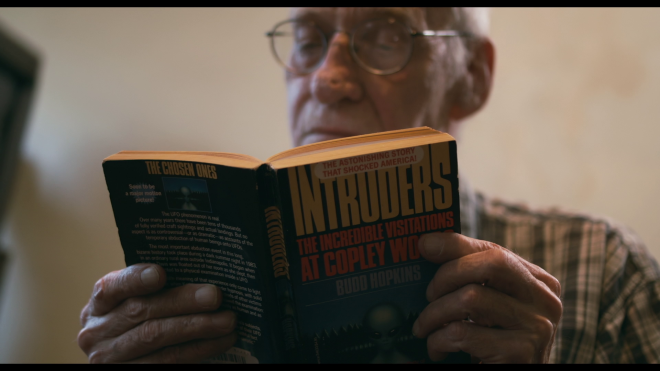 Presented with a DTS-HD MA 5.1 track, Love and Saucers doesn’t make a huge fuss about surround sound immersion. That’s not the focus. Surrounds are active and engaged when called for, but largely this is a front/center focused affair as David tells his story and lets the camera into his world. To that end dialog is crystal clear without any issue. All around a solid mix for this documentary. 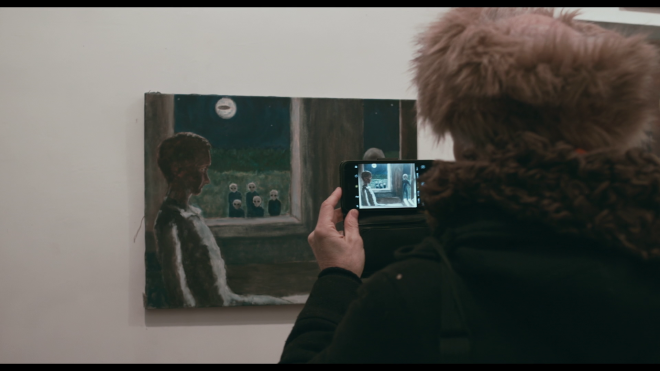 Not to leave anything behind there’s a full slate of interesting bonus features worth digging into. Note - on the packaging it lists an isolated soundtrack as a bonus feature, but for the life of me I couldn’t find it. It’s not listed in the bonus features and it’s not in the audio track architecture that I could see. 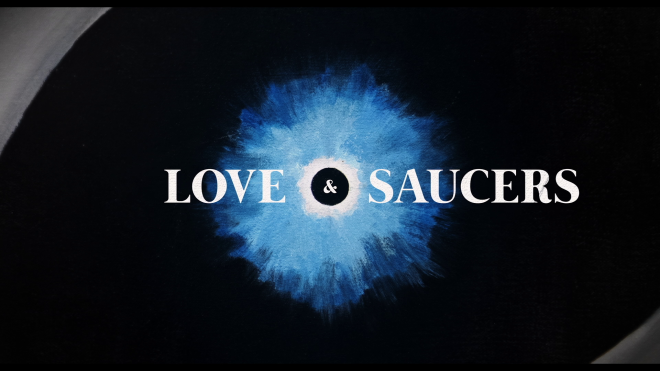 For fans of the subculture of alien encounters and abductions - or if you just really enjoyed The X-Files back in the day, Love and Saucers is a fascinating and compelling documentary. Whether you believe him or not, David Huggins makes a compelling and often fascinating character. His open honesty and unassuming nature is infectious as he details each of his encounters with a vivid memory and art. Terror Vision and Vinegar Syndrome delivers a splendid Blu-ray release of Love and Saucers. With a clean and clear A/V experience you can fully appreciate the world David lives in. Topped off with a fine collection of interesting bonus features, if you’re into this sort of topic you have a lot to take in and think about. Highly Recommended.