Father/Son duo Jim McCullough Sr and Jim McCullough Jr. join forces for the down and dirty low-budget thriller Video Murders. A psychopath is on the loose strangling women and a tough streetwise cop is on the hunt in this by-the-numbers but entertaining thriller. Restored from the original 16mm negative, Culture Shock delivers a welcome Blu-ray release offering a slick A/V presentation with informative bonus features. For fans of late 80s video store curios, Video Murders is certainly Worth A Look 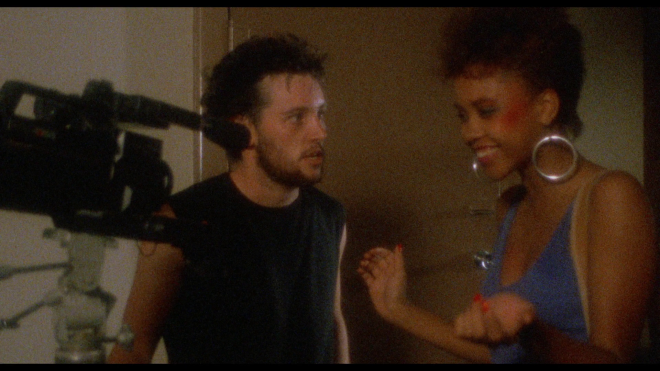 David Lee Shepard (Eric Brown of Mama’s Family fame) is desperate to get into the video production business - but he has deep-seated issues with his mother. Obsessed with trying to get the girls, be a man, and succeed in business he gradually descends into a nightmare of hiring prostitutes, taking them to his home, and strangeling them while recording his attacks on video. As the bodies pile up, Lt. Jerry Delvechio (John P. Fertitta) becomes increasingly desperate to catch the killer. After nearly getting caught in the act, David picks up a young innocent secretary named Melissa Rivers (Virginia Loridans) to feed his compulsion but is thrown off when Melissa actually tries to get to know him better. As things escalate, Melissa has a chance to survive if Delvechio can track down the madman in time.

Video Murders is classic video store rental fodder. Produced by Jim McCullough Sr. and written and directed by Jim McCullough Jr., the film essentially takes elements from all of the biggest and best serial killer thrillers of the 70s and 80s and spins them together. On paper, what we have here is something akin to Dirty Harry meets Manhunter. Made on the thinnest of shoestring budgets, the film isn’t half bad. Its biggest fault is being too ambitious with what it could adequately pull off. But I’d rather celebrate a movie that tries and fails than one that is content to go through the motions. Sadly it doesn’t always work and in the closing act when it should be building towards a suspenseful conclusion it plods to the finish line with an overlong car chase sequence.

Where it works best is how Jim McCullough Jr. manages the scenes between Eric Brown and Virginia Loridans. Loridans' Melissa is thankfully a smart woman who happened to bet her good night out on the wrong “gentleman.” It’s here where we fully learn David’s backstory and why he does what he does. Again, this is where I feel like elements of the Toothfairy killer in Manhunter AKA Red Dragon slip in. Their motivations are nearly identical with similar means of capturing and reliving their violent acts via videotape. While this segment may be quite on the nose, it’s done well and a highlight of the flick.

While I enjoyed this film quite a bit more than I expected, it’s also frustratingly clunky. Just when the film is starting to build momentum with a Detective/Killer-style cat and mouse chase, the film lumbers into the middle act adding random side drama for our hero cop and forcing the killer to start all over with the late introduction of Virginia Lordans’ character. I feel like if some of these elements with the detective were eliminated and had it established a relationship between David and Melissa earlier, the tension and payoff would have had more suspense with more impact to the dramatic final standoff. Video Murders is far from perfect but it’s more than watchable as a piece of 80s rental shop fodder. For the folks out there into the oddities and curios on disc, this is well worth checking out.

Vital Disc Stats: The Blu-ray
Video Murders arrives on Blu-ray thanks to Culture Shock and Vinegar Syndrome. Pressed on a Region Free BD-50 disc, the disc arrives in a standard clear case. If you order direct from Video Syndrome you score an exclusive limited-edition slipcover as well. The disc loads to an animated main menu with traditional navigation options. 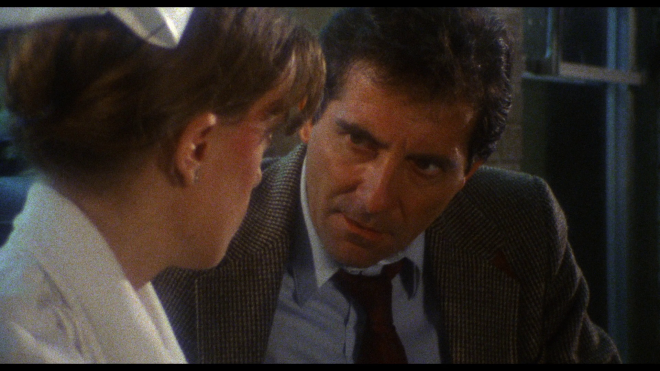 Originally shot on 16mm, this new transfer sourced from a 4K scan is pretty dang good. Not perfect mind you but considering all things it’s pretty good. 16mm always has a measure of source limitations ranging from softer than normal details to blooming lights and black levels that can get very close to crush. This transfer exhibits all of those factors but not to a degree that makes it horribly unwatchable - just par for the course in this case. When it’s good it’s great, and when it isn’t it leaves something to be desired. When it’s on point details are terrific clean facial features and textures. Colors are often bold with strong primaries. One slick aspect I enjoyed of this film is how the opening and closing credits are made to look like they were shot and finished on video. A nice touch for the show to be sure. 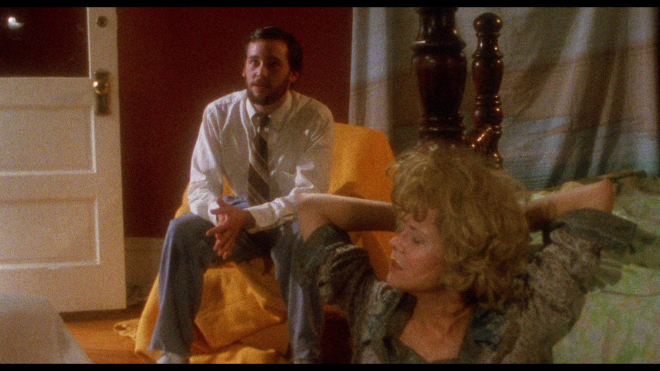 This disc also packs in an appreciable DTS-HD MA 2.0 track that is the best sort of workhorse. It gets the job done often with very impressive results. There are some cooked-in issues where dialog can sound a bit raspy or not cleanly recorded, but you never struggle to hear what’s going on. Given a lot of the film’s simple three-wall locations there isn’t a lot of sound design going on so it can sound pretty flat - even with a busy diner for a set. A nightclub scene and the film’s final car chase sequence pick things up and offer a little more sonic thrust to the track. 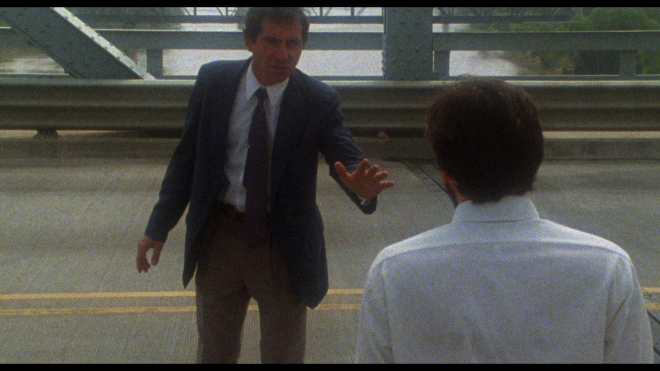 Bonus features may not be the biggest collection ever assembled, but for a movie like Video Murders, this is an impressive assortment to dig through and well worth the time for the curious. 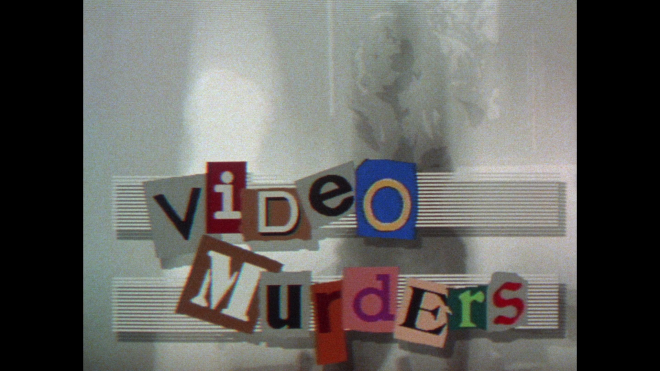 Video Murders may not be the greatest and best thing to ever come down the pipeline, but for routine rental ship shelf filler, it’s certainly better than average. If it can be accused of anything is trying to do too much without enough resources to pull it off completely. Performances from the lead cast are what keep this show afloat. Culture Shock delivers an impressive Blu-ray release tossing up a slick A/V presentation and a fine collection of interesting bonus features to investigate. For those that like off the beaten path curios for their collection, Video Murders is certainly Worth A Look