If there was one thing John Ford loved was the calvary! Not a Western nor a member of the famed Calvary Trilogy, John Ford’s The Horse Soldiers delivers an action-packed, humorous, and sometimes romantic recreation of a famous Civil War raid starring John Wayne, William Holden, and Constance Towers. It may not rank as top-tier Ford, but it’s a highly entertaining adventure and the cast is in perfect form. Kino Lorber Studio Classics delivers an exciting new Blur-ay release offering up a welcome new transfer, clean audio, and a nice commentary track to round out the bonus features. Recommended

To counter the Confederacy, the Union has cooked up a hair-brained scheme that’s so crazy it’s the last thing the Rebs would expect. A cavalry raid under the leadership of former railwayman Col. John Marlow (John Wayne) will swiftly move hundreds of miles deep into enemy territory to destroy the supply depot at Newton Station. While Marlow wants this to be a clean and easy raid with as few casualties as possible, things get complicated when the army tasks Major Henry Kendall (William Holden) as his chief surgeon. Marlow’s raid is further complicated when he’s forced to bring the mistress of a Confederate plantation (Constance Towers) with them or risk their position being reported to the enemy.

Loosely based on the real Grierson’s raid, The Horse Soldiers is the perfect vehicle for another rousing John Wayne and John Ford collaboration. Remove the setting, time period, and uniforms, this film could have easily been another grand Western adventure for the pair. As it stands, it’s a rip-roaring Civil War adventure film complete with blistering action sequences film on a grand scale that only a master like John Ford could deliver. It’s not entirely historically accurate, but if you want to get the full story, check out The Real Horse Soldiers by Timothy B. Smith - it’s a great read with some fascinating details about the raid. 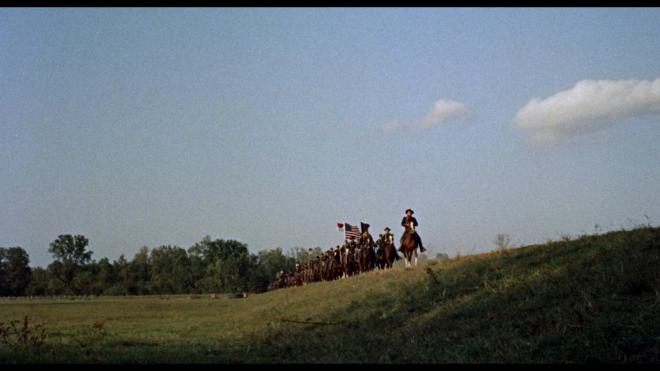 While the film has the heart of an action/adventure war film, it also aims to squeeze in some light romance by way of Constance Towers and war-time moralizing by William Holden’s Kendall. These two essentially play the angels and devils dancing on Wayne’s shoulders. Wayne’s Marlow is far from a cruel commander as he cares deeply for the lives and well-being of his men, but he’s also fully aware of the magnitude of his command where the slightest delay in caring for one wounded man could bring the death of dozens more. This moralizing of doing the right thing for one man is where the verbal sparring between Wayne and Holden crackles and brings some genuine emotional heft to the film. They’re opposites of the same coin with the same goals but different approaches. 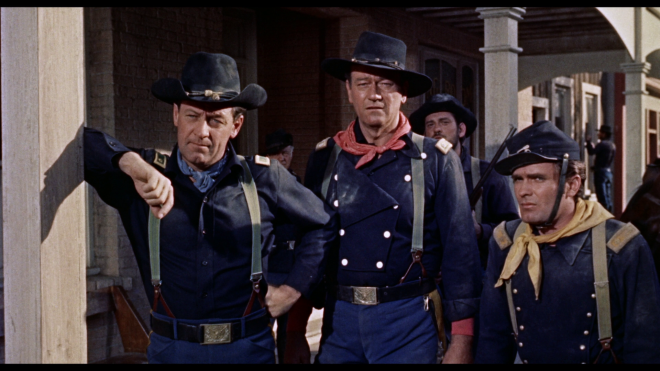 Constance Towers thankfully isn’t in the film just for eye-candy as the southern belle Hannah Hunter but she’s a bit of overkill for a lean and to the point film. If there’s a weak point in the film it’s with Hunter and her relationship between Marlow and Kendall. It’s a love triangle without really being a love triangle with Wayne becoming an old softie around the beautiful woman without fully going old softie. You can feel Ford working with expectations for a big Hollywood audience film like this without fully giving in to the conventions. The comic relief elements also feel out of place and for a film about the necessity of speed and stealth, these scenes are clunky and drag the pace of the picture. They may help round out the characters and give some dimension, but I feel like the film already had plenty of that with Wayne and Holden going toe-to-toe that everything else is just bloat. But those are small quibbles for an otherwise exciting Civil War film that very much plays like one of John Ford's epic Westerns. 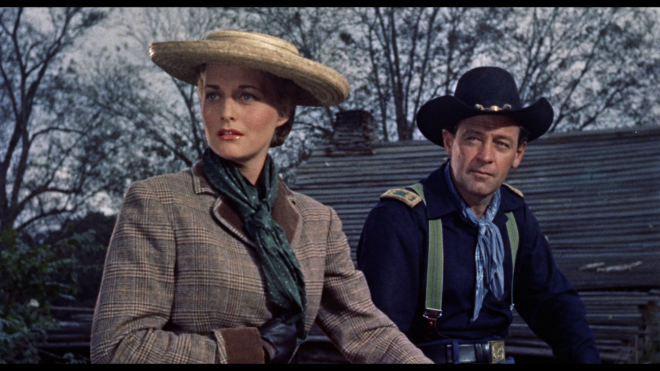 At the end of the day, The Horse Soldiers is a rousing war film with some thrilling action sequences and great performances. Wayne is in peak form with Holden acting as the perfect character counterweight. Apparently, the pair didn’t get along well when the camera wasn’t rolling but that didn’t seem to affect their performances. Constance Towers helps round out the cast and make the film a little more wide audience appealing. Her character may not be necessary, but she makes the most of it. Keep an eye out for other casting greats including women’s Tennis Champion Althea Gibson, Strother Martin, Denver Pyle, Carelton Young (of Reefer Madness fame), Hoot Gibson, and Judson Pratt with Ken Curtis. The Horse Soldiers may not be among John Ford’s classic masterpieces, but it’s an entertaining film with some terrific action sequences and great performances.

Vital Disc Stats: The Blu-ray
The Horse Soldiers gets a second life on Blu-ray thanks to Kino Lorber Studio Classics. Pressed on a Region A BD-50 disc, the disc is housed in a standard sturdy case with identical slipcover artwork. The disc loads to a static image main menu with traditional navigation options. 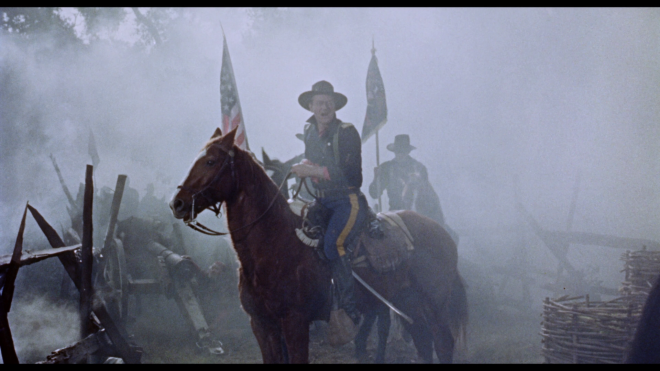 Reportedly sourced from a new 4K master, this new transfer of The Horse Soldiers easily gallops over the 2011 Blu-ray from MGM. I only checked that disc out from Netflix the way back when and was generally unimpressed with the less-than-appealing presentation - so I never bought it. The old disc struggled with a rough source element and pretty poor colors and black levels. That’s not an issue here. A little age-related wear and tear remain with some occasional mild speckling but nothing severe or distracting. Optical dissolves are rough around the edges for those few frames but quickly return to normal. Details are terrific allowing you to fully appreciate the Louisiana locations, costuming, facial features, and fine textures in the costumes. Colors are also much more lively with bold primaries and healthy flesh tones. Black levels are strong giving the image a terrific sense of depth. There are a couple of day-for-night shots that struggle a little and an interior scene before the climactic battle is a little brownish and murky, but overall this is a nice looking release. Not perfect, but a welcome improvement. 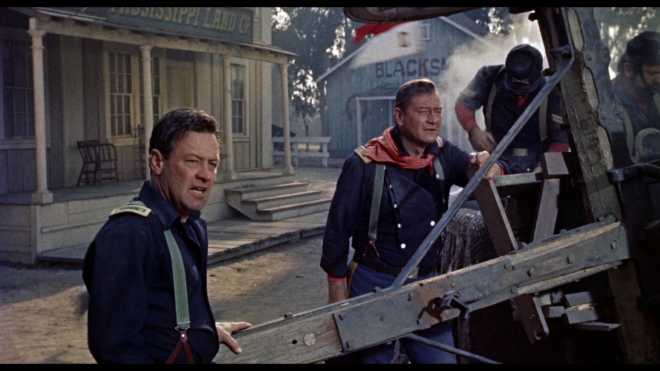 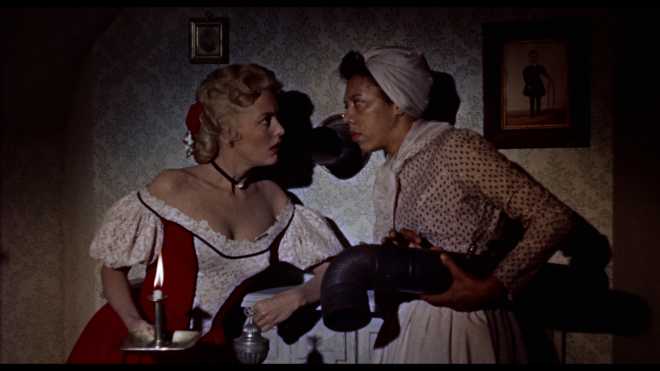 Without the 2011 disc on hand to compare, The Horse Soldiers rides away with a solid DTS-HD MA 2.0 mono track. Dialog is strong and clean throughout with a robust soundscape. Sound effects - especially gunshots and cannon explosions have nice weight and impact. The middle battle and the film's climactic standoff are great examples. Scoring by David Buttolph is rousing and appropriately punches the right emotional cords for any given scene. Levels are on point without issue and the mix is overall free of any age-related hiss, scratches, or pops. A clean mix that gets the job done. 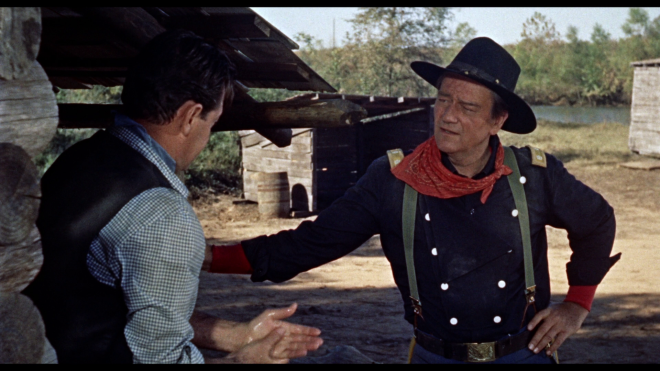 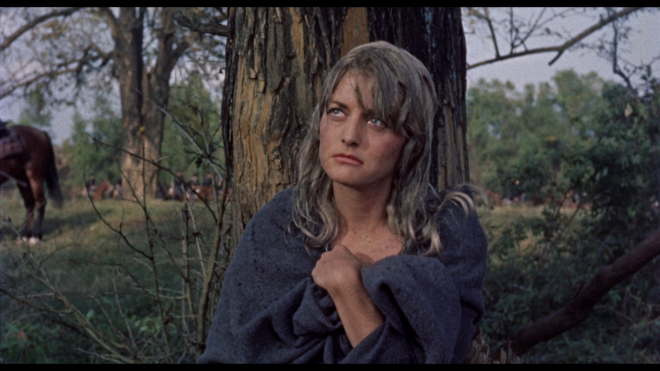 Perhaps not the biggest assortment of bonus features ever assembled, but it’s more than what we got on the 2011 Blu-ray. The audio commentary from historian Joseph McBride is an informative listen, maybe a tad dry in spots, but all in all a worthwhile track to dig through. After that, we get the usual assortment of KLSC trailers. 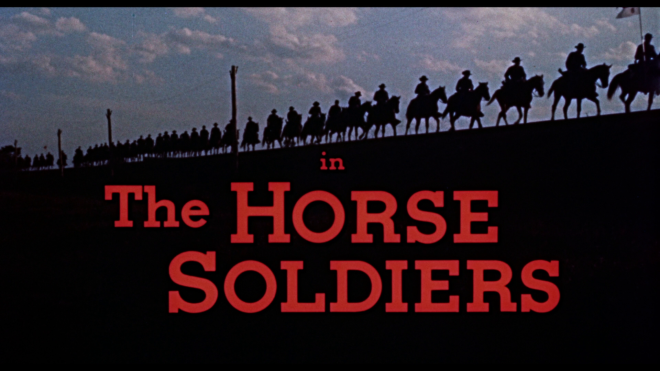 The Horse Soldiers may not be the greatest or best of John Ford and John Wayne’s many collaborations, but it’s a fine film, nonetheless. Filled with great action sequences - Wayne headlines with welcome turns from William Holden and Constance Towers. There are a few clunky bits but compared to the rest of the film these rough patches are easy to overlook. Kino Lorber Studio Classics delivers a welcome new Blu-ray release of The Horse Soldiers featuring a transfer sourced from a new 4K master that is a marked improvement over the old 2011 Blu-ray. If you’re a fan looking to upgrade or new to the film, this is an easy one to call Recommended