Despite being stylishly identical — a near carbon copy, to be more precise — to Zack Snyder's wildly imaginative adaptation of Frank Miller's graphic novel, '300: Rise of an Empire' succeeds at only being passably entertaining, an easy way for passing the time while waiting for a better movie to come along. Like its predecessor, the plot, based on Miller's yet-unpublished comic 'Xerxes' and adapted by Snyder and Kurt Johnstad, doesn't demand much of its audience, because the film subscribes itself to the idea that littering the screen with pretty CG visuals is more than enough to keep viewers engaged. This is essentially the same underdog story as before, except 300 Spartans versus Xerxes's army of thousands is reimagined as a small navy fleet against thousands of warships.

To some extent, this wouldn't be all that bad if not for the fact that the film pretty much repeats what worked in the first movie, something that has just recently been turned into a joke in another sequel, '22 Jump Street.' Israeli filmmaker Noam Murro makes his American debut with an array of sweeping camera movements and slow-motion sequences of screaming soldiers that suddenly switch to quick, rapid gestures of swords plunging into the hearts of the enemy while large goblets of blood splatter the screen. The look and feel of Murro's sequel so closely resembles the empty stylization of the first that it might as well have come from Snyder. The relatively new director completely fails at providing something unique and distinctly his, creating an even more vacant and hollow feature.

Ultimately, the only difference between the two movies is the two leads: Sullivan Stapleton ('Animal Kingdom') as the theatrically gallant Themistocles and the stunningly beautiful Eva Green in a winning performance as the brilliant military strategist Artemisia. In fact, in a film so decisively geared towards young male viewers and about burly muscular men in combat, the only genuine highlight of the entire production is Green's portrayal of a strong-minded, confident and intelligent female tactician. The real Artemisia was indeed the only woman during the Greco-Persian Wars and led a small fleet in the Battle of Artemisium to victory. Here, she's given reign over Xerxes navy, and the French-born Bond-girl does marvelously in the role, terrifically balancing the character's cold-heartedness and darkly sinister personality with a strangely attractive and fascinating appeal that makes her utterly irresistible. 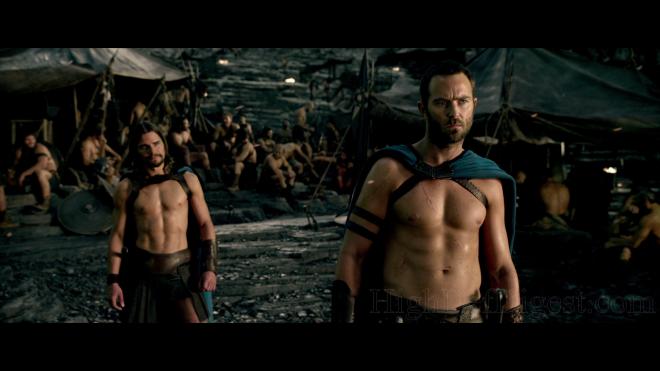 Green's seductive ploys not only hypnotize the camera and make her the most captivating aspect in every scene she appears, but her bewitching games also do well seducing Stapleton's Themistocles. After an hour of the Athenian General's overtly sentimental and histrionic lectures — they never quite reach the level of the stirring speeches we've become accustomed to in movies of this sort — it's a smidge disappointing that he so easily falls prey to Green's sensual lures. Revealing that the soldier is slightly more brawn than brains, the meeting of the pair is really only done to satisfy male viewer's fantasies and surprisingly goes on for a while with little consequence to the overall narrative. The scene also suggests the general somewhat weaker than Rodrigo Santoro's god-king Xerxes, who has no qualms putting Artemisia in her place when the time is appropriate.

Aside from Green's performance — which when it comes right down to it, this is really her show — '300: Rise of an Empire' has little in its advantage, unless we count its visual design, which is nothing more than a duplicate of the first movie. The plot is not so much a direct sequel as a parallel story to the events in Snyder's film, with pieces taking place before and after King Leonidas's last stand. It's a prequel-sequel "wibbily wobbly timey wimey" ball of boredom. Along with Santoro, Lena Headey takes a break from her conniving schemes as Cersei in 'Game of the Thrones' to reprise her role as Gorgo, Queen of Sparta. However, it is Gerard Butler's gruff, surly harangues which are sourly missing, despite not having survived the first movie. Sparta, this weak sequel is most assuredly not.

Warner Home Entertainment brings '300: Rise of an Empire' to Blu-ray as two-disc combo pack with a code for an UltraViolet Digital Copy. Housed inside an eco-vortex keepcase with a glossy slipcover, the Region Free, BD50 disc sits comfortably opposite a DVD-9 copy. Following a trailer for 'Jupiter Ascending,' viewers are taken to an animated screen flashing promotional artwork while menu options occupy the bottom of the frame and music plays in the background.

As a side note, the Blu-ray did not play nice with my Oppo player. Every time the movie would start, the pop-menu would appear and refused to go away, in spite of numerous attempts and pressing buttons on the remote. Turning the BD-Live and BD-J functionality on and off did not help, but when switching to the PS3, the disc worked flawlessly.

The fantasy war sequel glorifies — or rather gory-fies and splatters — Blu-ray with an astounding reference-quality 1080p/AVC MPEG-4 encode that litters the screen with every juicy, bloody detail. Drops of sweat glisten with shocking clarity, and individual wrinkles on the faces of the cast are distinct while also exposing pores and the tiniest blemish on their lifelike complexions. Fine lines in the wooden boats, jewelry and costumes are razor-sharp, as various CGI sequences amaze with realism. However, the stylish photography of Simon Duggan tends to create a few blurry shots, but it is all part of a deliberate look that thankfully doesn't detract from the overall quality of the video.

Presented in 2.40:1 aspect ratio, the digital-to-digital transfer also displays an intentionally monochromatic color scheme that is pretty much identical to the film's predecessor. The palette is an interesting mix of golden yellows and rusty browns that make the picture feel and look antiquated while also favoring lots of silvery blues and teals, which also make the presentation seem somewhat metallic. Nonetheless, primaries remain vibrant and well saturated amongst an array of bold pastel hues which are pleasing to the eyes. Blacks are rich and opulent, sometimes creating a bit of crush, which are arguably intentional, but still produce a beautiful cinematic appeal. With spot-on, crisp contrast levels throughout, the movie is sure to please fans.

Likewise, the 7.1 DTS-HD Master Audio soundtrack will leave listeners with a big smile on their faces. Many fans will enjoy using this to demo their systems. Right from the start, as stone-like doors open to reveal the ending of the first movie, the track impresses with a deliberate design that commences subtly in the center and gradually widens, slowly spreading to the sides and rears before slamming with a deep, hard bass note. For the remainder of the time, the lossless mix maintains a satisfying 360° soundfield, filled with a variety of noises, from the daily activities of townfolk to the sounds of wildlife in the distance. Action sequences are, of course, the highlight, as the room fills with the roars of soldiers all around, weapons flying through the air, the winds of a violent storm blowing through the night or the loud sharp cracks of thunder overhead.

In the front soundstage, imaging is imposingly broad and highly engaging, with fluid, well-balanced channel separation, generating a remarkable sense of presence and a large wall of sound that never lets up until the very end. Panning is flawless, as swords swinging from right to left and vice versa without trouble and arrows fly from the front of the room to the back with spotless realism. Dynamic range is crisp and strikingly extensive with acoustical detail coming across with sharp clarity, allowing for every clash of metal and every splinter and debris from boats crashing into one another to be heard without the slightest hint of distortion. Although it doesn't digs very deep, the throaty and well-responsive low-end adds a palpable weight to the action and music. (Check out the graph here to see just how low the bass goes.) Amid all the chaos and gory mayhem, vocals remain distinct and precise in the center, making this high-rez track very gratifying and enjoyable.

Despite being stylishly identical to Zack Snyder's wildly imaginative adaptation of Frank Miller's graphic novel, '300: Rise of an Empire' is a passably entertaining follow-up that neither complements nor augments its predecessor. Other than for the visual design, the film's only genuine highlight is Eva Green's deliciously evil performance as the film's seductive villainess. The Blu-ray arrives with stunning, reference-quality audio and video presentation that will have fans rushing to buy on day one. A small but surprisingly entertaining collection of insightful supplements makes the overall package, at the very least, a strong rental for the curious and those sitting on the fence.

Sale Price 9.99
List Price 14.97
Buy Now
3rd Party 5.38
In Stock.
See what people are saying about this story or others
See Comments in Forum
Previous Next
Pre-Orders
Tomorrow's latest releases