Starring Julian Sands as the titular killer, Dario Argento's The Phantom of the Opera reimagines the classic horror tale into a stylishly romanticized and surprisingly ornate affair between two unlikely lovers but is often interrupted by sudden bursts of slapstick comedy and the director's unique brand of violence. The Blu-ray from Scorpion Releasing arrives with a surprisingly good and satisfying audio and video presentation. With a small but enjoyable set of bonuses, the overall HD package is Worth a Look for the curious and hardened Argento fans.

Italian horror maestro Dario Argento brings his unique brand of horror to The Phantom of the Opera, a stylishly romanticized and surprisingly ornate take on Gaston Leroux's classic 1910 novel. Only, Argento's vision labors at being seen as a completely different retelling from the hundreds of adaptations before while simultaneously, toiling to remain true to the spirit of Leroux's well-known story. One of the more glaring differences is Argento's usual debauchery of undue violence and excessive gore for its own sake rather than in service of the plot. And it's all bizarrely mishmashed with a heavy-handed layer of gothic romanticism, a classy atmosphere that's sporadically interrupted by weird moments of slapstick comedy. Most notorious and perplexing is the rat catcher Ignace (István Bubik) and his henchman (Sandor Bese) in a grisly accident while riding their rat-killing contraption, which is more cartoonishly silly than shocking.

However, the most flagrant if not also brazenly ambitious difference from all other screen versions is Julian Sands starring as the titular Phantom sans the gruesome disfiguring deformities described in detail by Leroux and as accurately depicted by Lon Chaney's 1925 performance. Instead of the corpse-like figure with yellow eyes sunken so deep into his face that it almost appears like a skull, Argento introduces audiences to a more aesthetically pleasing and traditionally handsome version of the tragic villain dwelling in the catacombs of the Opéra de Paris. The closest we come to Sands ever seeming like a specter is his long, oily blonde hair and pale skin as he moves through the dark shadows of the opera house. The British actor, perhaps best known for his performance in the Warlock movies, is nary given the opportunity to seem menacing or truly threatening although we're frequently told that everyone fears him. 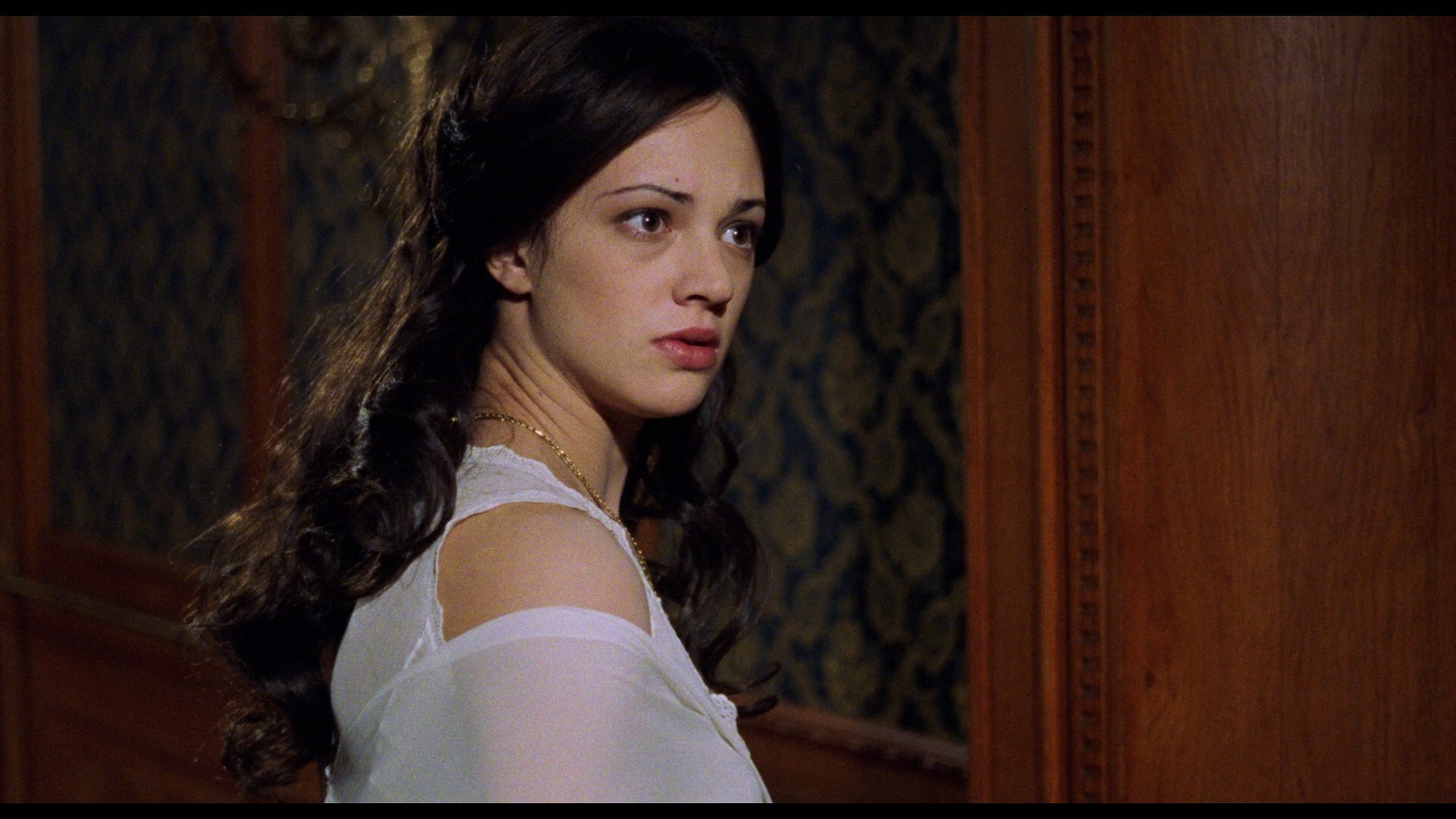 Co-written with Gérard Brach (long-time Roman Polanski and Jean-Jacques Annaud collaborator), Argento further adds to the legend of The Phantom with scenes in the opening of a baby abandoned without explanation and raised by rats, which never play a significant enough role other than to seemingly mourn at The Phantom's death. Even more bizarre is the character apparently being able to communicate with others through telepathy, particularly with his object of obsession, Christine Daaé (Asia Argento). And Christine's character is arguably where the filmmakers truly blundered this unusual adaptation, having the young opera singer be enchanted by The Phantom's rodent-like magnetism and actually fall in love with him. Then again, that would explain why the filmmakers went with the attractive Sands — better to shag a good-looking sociopathic murderer than a hideous deranged lunatic residing in a watery cave with rats.

The various changes and adjustments to the original novel are clearly done for prioritizing the visuals and overall stage production, which is ultimately where The Phantom of the Opera achieves some level of success — however small that victory may be. Working with award-winning cinematographer Ronnie Taylor (Gandhi), the gritty photography comes with a strangely colorful, energetic spell that also feels haunting and dreamy, heightening Antonello Geleng's (Dellamorte Dellamore) stage design to impressive beauty. Perhaps, most surprising is the legendary film composer Ennio Morricone (The Good, the Bad and the Ugly, The Untouchables) creating a remarkably understated yet rather ordinary score, which is not to say it's bad but surprisingly unremarkable or lacking any distinct characteristic. And with these minor wins, Argento's reimagining of a horror classic is, at least, worth checking out for fans.

Vital Disc Stats: The Blu-ray
Scorpion Releasing brings Dario Argento's The Phantom of the Opera to Blu-ray on a Region Free, dual-layered BD50 disc inside the standard blue case. At startup, viewers are taken to a static menu screen with music playing in the background and the usual options along the bottom. 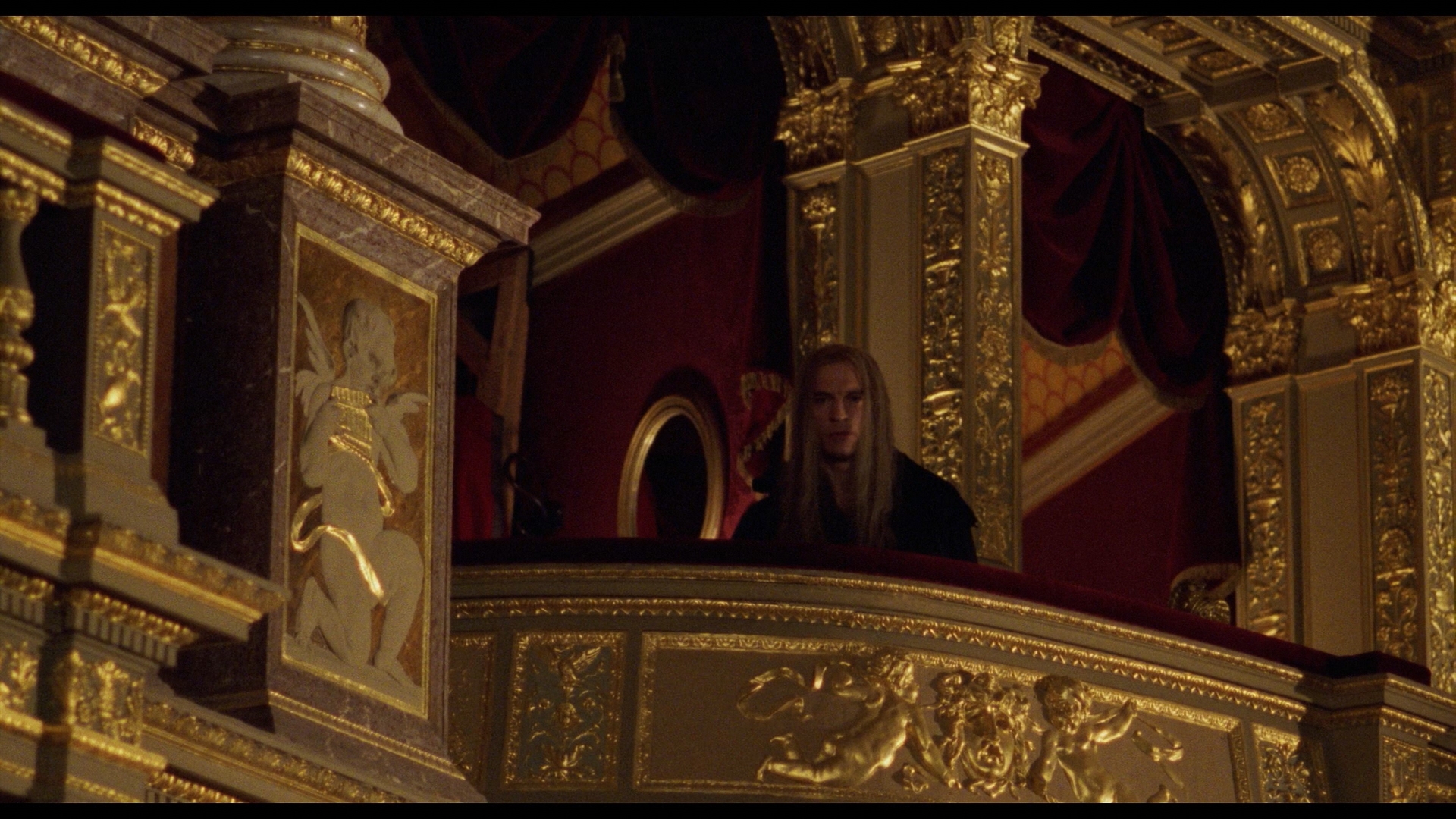 Coming from a recent remaster, the Italian cult favorite haunts Blu-ray with an excellent 1080p/AVC MPEG-4 encode, flaunting sharp, well-defined lines in the furniture and the ornate architecture of the Parisian opera house and stage.

We can plainly make out the wallpaper design, distinctly see the grain in the wood and the fine stitching in the costumes. Occasionally, there are random spots of discoloration and small specks of dirt, but overall, the source appears to be in outstanding condition. The worse moments are those involving the outdated CG optical and composite effects, especially those taking place on the roof of the opera. Nevertheless, the transfer looks great, awash in a noticeable but thin layer of natural grain that's consistent. The 1.85:1 image is bathed in richly-saturated primaries, particularly an animated array of reds, and full-bodied secondary hues with a variety of earthy browns, sepias and warm yellows of The Phantom's caves being the most eye-catching. Facial complexions are revealing with healthy, appealing skin tones in the entire cast. All the while, the HD video also boasts inky-rich black levels with strong shadow delineation and a spot-on contrast balance with crisp, brilliant whites, providing the photography with appreciable depth. (Video Rating: 84/100) 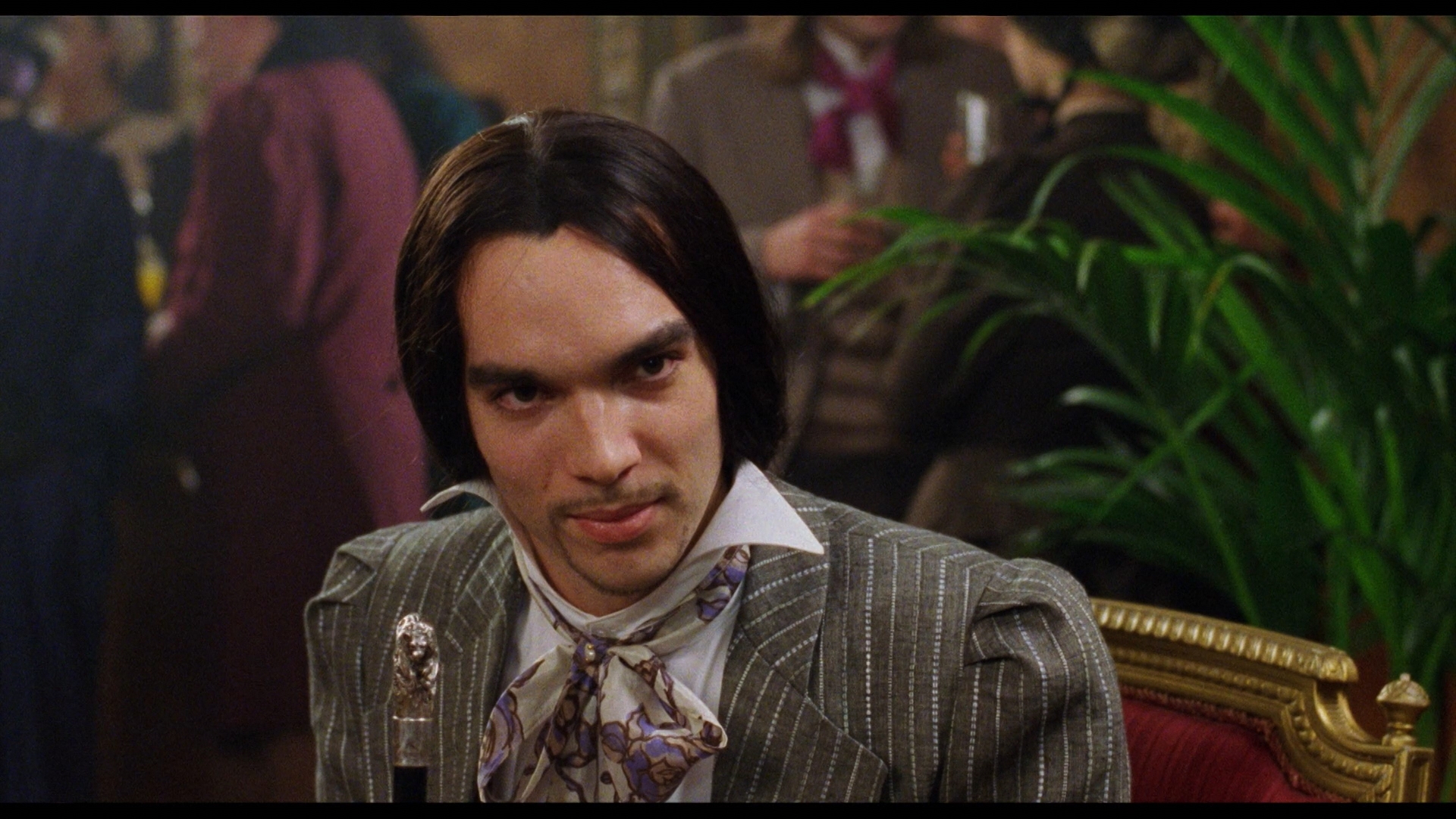 Terrorizing home theaters is a great but not particularly memorable DTS-HD High Resolution 5.1 soundtrack although the back of the package reads DTS-HD Master Audio Stereo, and listeners have the option between either the English or the Italian version. The front-heavy presentation comes with a few atmospherics that occasionally employ the surrounds, but the background activity moves nicely and fluidly between the three front channels, creating an appreciably broad and engaging soundstage. However, Ennio Morricone's score and other music do much of the work, bleeding and echoing into the sides and widening the soundfield. Except for the obvious ADR work, dialogue is intelligible and well-prioritized throughout. The mid-range exhibits strong detailing and clean distinction, but it's not particularly extensive or really ever pushes far into the upper ranges, making for a rather uniform and unvarying lossless mix. On top of that, there isn't much going on in the low end, so as satisfying as the track is, it generally lacks a sense of presence or weight even in the action and music.

It's also worth noting that at around the 00:56:30 minute mark, a loud ringing suddenly distracts and spreads into the surround speakers, lasting nearly a minute. After repeating the scene a few times and switching between languages, it appears to be an inherent issue with the source and not a fault with the codec. (Audio Rating: 68/100) 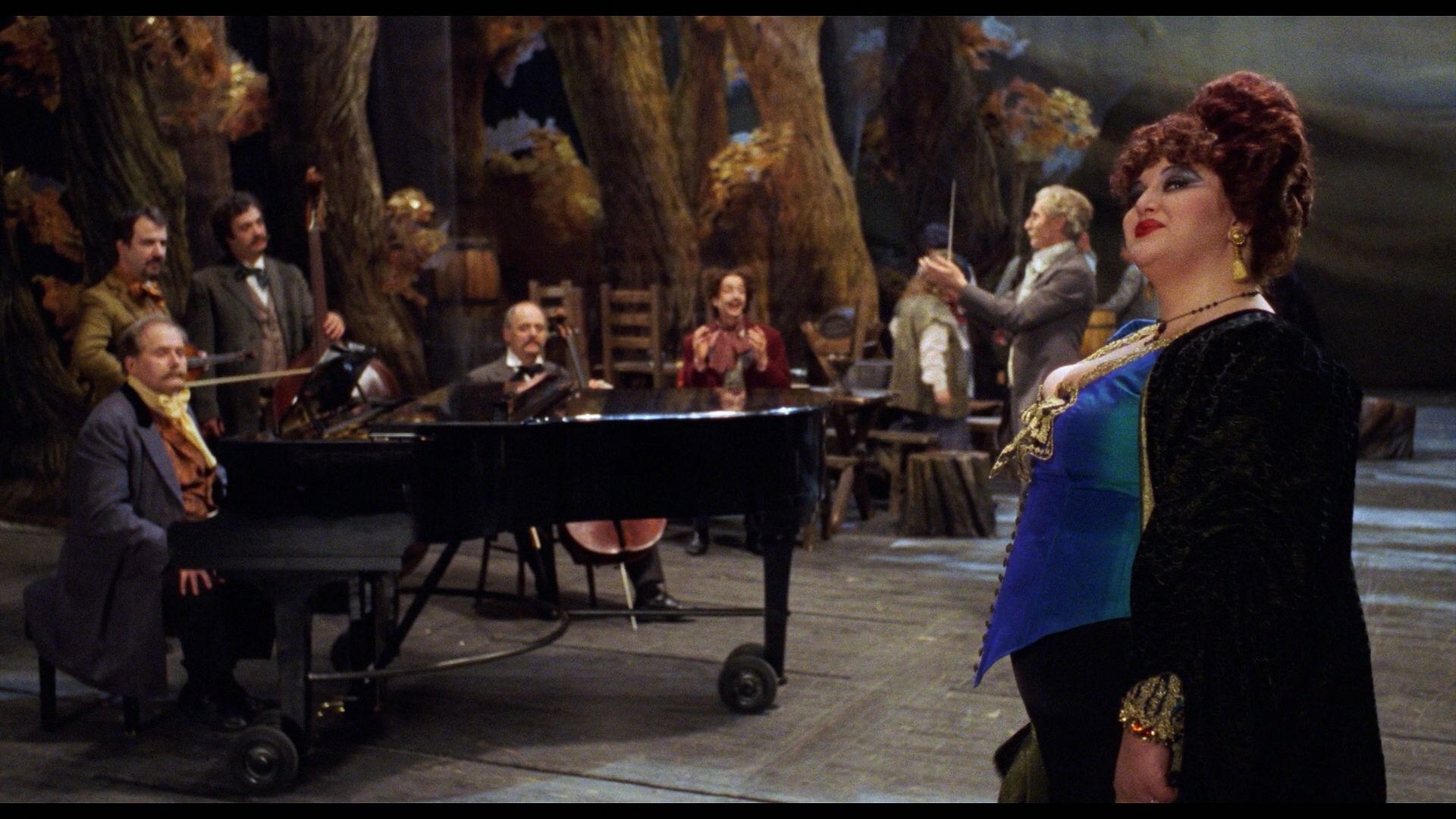 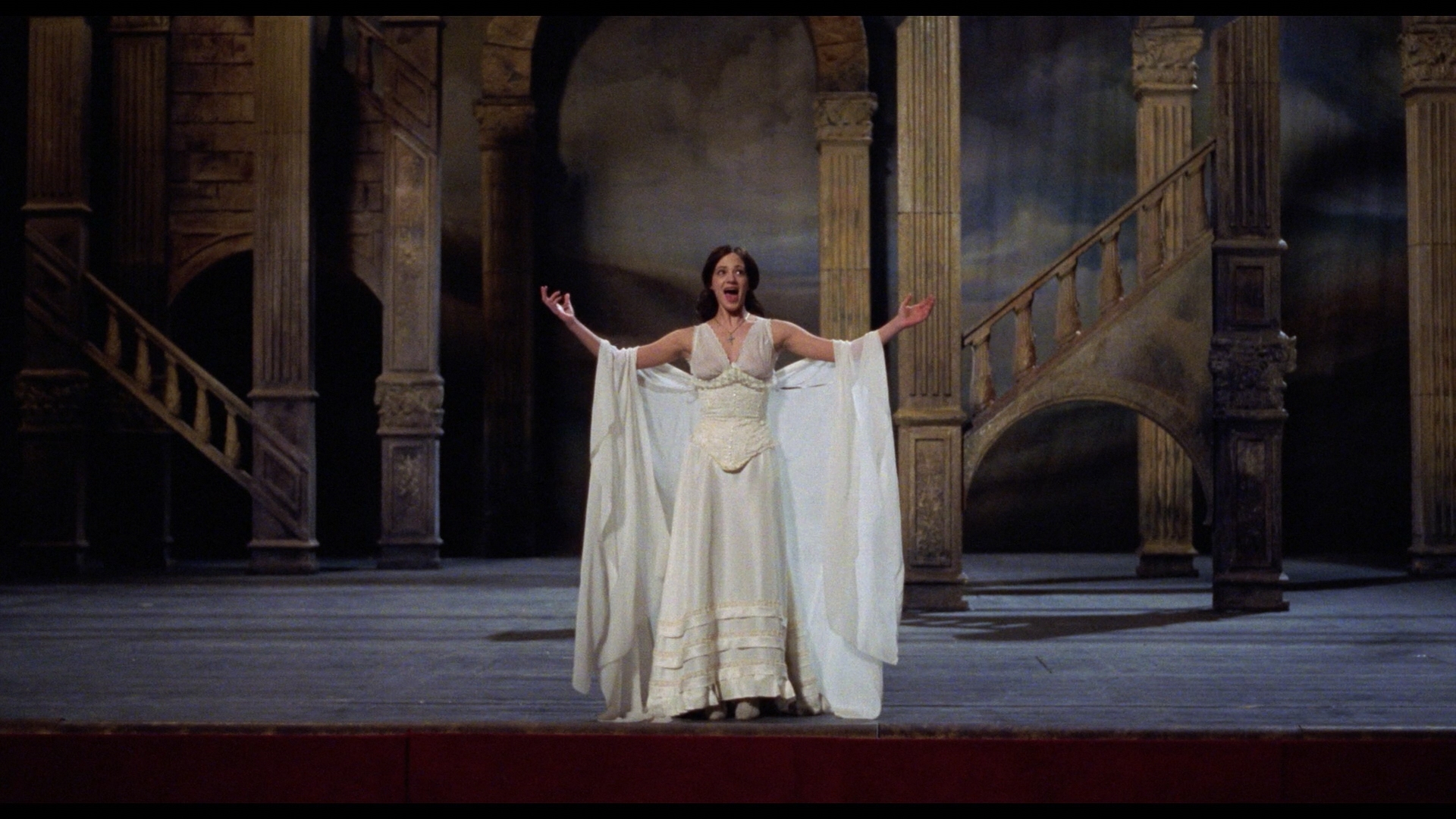 Italian horror maestro Dario Argento tries his hand at Gaston Leroux's classic 1910 novel in The Phantom of the Opera, starring Julian Sands as the titular killer dwelling beneath the Opéra de Paris. Playing opposite the director's daughter Asia, Argento reimagines the horror tale into a stylishly romanticized and surprisingly ornate affair between two unlikely lovers but is often interrupted by sudden bursts of slapstick comedy and the director's unique brand of violence. The Blu-ray from Scorpion Releasing arrives with a surprisingly good HD video presentation and a strong DTS-HD High Resolution soundtrack. With a small but enjoyable set of bonuses, the overall package is worth a look for the curious and hardened Argento fans.