The mysterious identity of the most notorious serial killer Jack The Ripper has been alluring to true crime aficionados for over a century. Dirty Jack also makes for some interesting cinematic outings and none are as fantastically bizarre as 1989’s Edge of Sanity starring the late great Anthony Perkins. Arrow Video gives this oddity a fresh new Blu-ray release complete with a brand new A/V presentation and a swath of informative and interesting bonus features. It may not be a great film but it’s certainly Worth A Look - especially for Jack The Ripper.

London’s esteemed surgeon Dr. Henry Jekyll (Anthony Perkins) has built a grand life and an amazing reputation. He’s married to his beautiful wife Elizabeth (Glynis Barber), but he’s also married to his work. In an effort to create new potent anesthesia to enable more effective surgery, Dr. Jekyll mixes traditional ether with cocaine. When he accidentally inhales the mixture Dr. Jekyll’s psyche is fractured unleashing the twisted psycho-sexual madman Jack Hyde. Jack stalks the streets of London’s seedy Whitechapel area preying upon prostitutes to fuel his sexually murderous impulses. As the addiction to his other personality grows, Elizabeth may be the only one who can stop Jack Hyde and the carnage and save Dr. Henry Jekyll.

Ever since I was a little kid and first heard of the crimes, I was intensely interested in Jack the Ripper. It was both fascinating and terrifying. One time after reading some of the unfiltered gnarly details of one murder I literally couldn’t sleep that night I was so sure that if I did fall asleep, Jack would get me. When I went to the London Dungeon and saw their Jack the Ripper, exhibit the same thing happened again only compounded by severe jetlag. I was never an easy kid to scare, but Jack the Ripper scared me - and fascinated me. So I dove head-on into finding movies about Jack The Ripper.

There are a lot of Jack the Ripper movies out there. Some are great and terrifying, some are middling and entertaining, and others are just flat bizarre. Edge of Sanity falls into that latter category. This isn’t the first film to tie the infamous Whitechapel murders to famous literature, but it is a damned intriguing twist to tie the rampage to one of literature's most famous villains, Mr. Hyde. Director Géard Kikoïne with his writers J.P. Felix and Ron Raley hit on an interesting concept of blending source materials with the en vogue social awareness of crack cocaine addiction. It’s the setup for an entertaining but not remotely historically accurate version of events. Which is fine, A Study in Terror and Murder by Decree both saw the fictitious detective Sherlock Holmes go toe-to-toe with The Ripper often sidelining facts in favor of very entertaining and thrilling action. But Edge of Sanity goes in some strange directions. 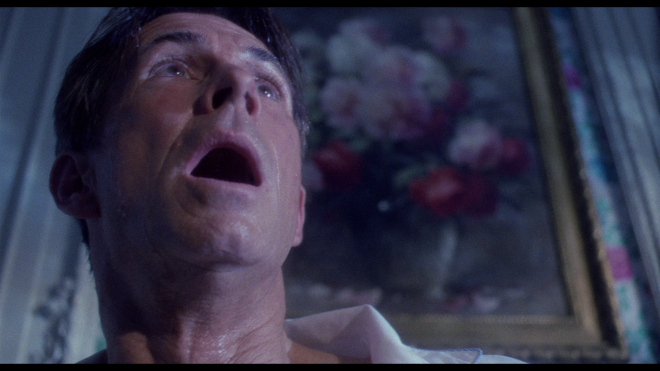 While this film can be wildly entertaining thanks in large part to a high-camp performance from Perkins, it’s also a bizarrely garish film. On one hand, it’s working to create a sense of period-accurate old Victorian London, but then for Mr. Hyde’s outings, it becomes a contemporary nightmare with a mix of 80s fashions and aesthetics that’d be better suited for some nightmarish nightclub if Tech Noir from The Terminator and Club Scum from Hobgoblins were a single entity. It doesn’t add tension. It doesn’t add to the horror element. It’s just kind of there to be there.

In an extension of the over-the-top design elements of Mr. Hyde’s actions, the film aims for shock value through gratuitous nudity and sexual themes but weirdly pulls back on gore. And as far as shock value goes it’s pretty tepid. Part of the issue is it just throws it out there, there’s no build-up or visual foreplay of any kind - just bits and pieces of the human anatomy without any sensuality. As I pointed out in my review of the Scream Factory double feature set of Destroyer / Edge of Sanity, this film probably would have worked better as a full-throated Italian Giallo entry than what we have here which is more akin to some sort of neo-gothic Grand Guignol that's relatively light on gore and viscera. 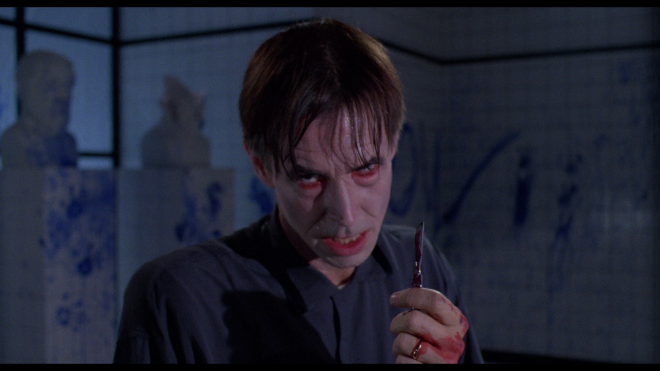 To the credit of Mr. Perkins, he holds this thing together. He may be bouncing from one performance extreme to the next, but he knows how to work the screen. Through his time on the Psycho franchise, and other horror and thriller installments over the years, he has an instinct for the right time to nod and wink at the camera. He’s the one who sells the concept that friendly Mr. Jekyll could transform into Jack "the Ripper" Hyde and that’s where the film works best. Edge of Sanity isn't necessarily “good” or “bad” it’s just critically mediocre. Everything is in place for a slick high-concept take on this meeting of classic literature and true crime, but it just doesn’t run with it. At least not in a direction that’s wholly satisfying.

Vital Disc Stats: The Blu-ray
Edge of Sanity slices at its second appearance on Blu-ray this time as a single film release from Arrow Video. Pressed on a Region A BD-50 disc, the disc is housed in a standard clear case with new custom artwork and an alternate reversible insert showcasing the original artwork. Also included is a booklet with an essay from Jon Towlson. The disc loads to an animated main menu with traditional navigation options. The artwork indicates it's rated R, but the traditional R-rated cut runs only 85-minutes and this is the full 90-minute Unrated version. 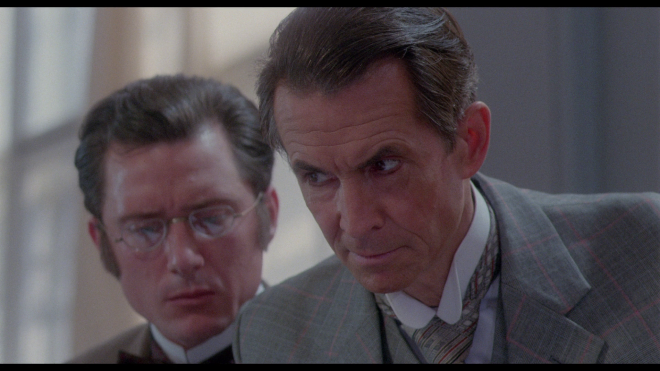 Fans of the film will be very happy to see that the old transfer sourced for the Scream Factory release has not been recycled for this disc. Instead, we get a new transfer sourced from a new 4K scan with restoration work and color grading completed in 2K - and it’s a huge improvement. I no longer have my old Destroyer/Edge of Sanity disc, but if you look back at my old review you should see the difference in quality quite clearly. While some of it may be a bit nonsensical, I’ll give a lot of credit for care and attention to the film’s production design and makeup. Details are cleaner and clearer allowing you to fully appreciate the visuals of the film. The daytime Dr. Jekyll sequences are straight-laced but offer a pleasing color display, but things really come to life for Mr. Hyde with deep impressionistic shadows and wildly bold colors. How Mr. Hyde’s pale complexion contrasts against the various background colors is a clever visual touch. Film elements are in much better shape with a nice even grain structure throughout. All around a great new transfer for this weird little film. 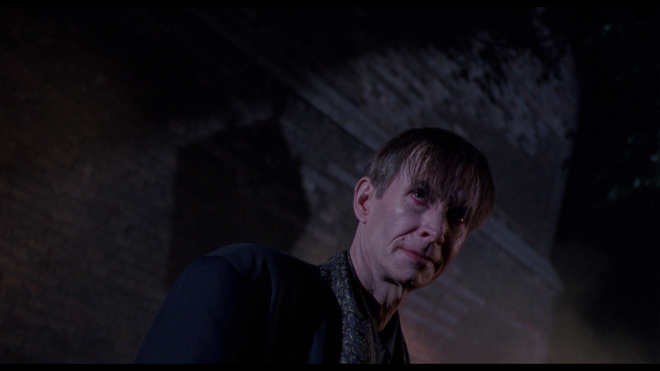 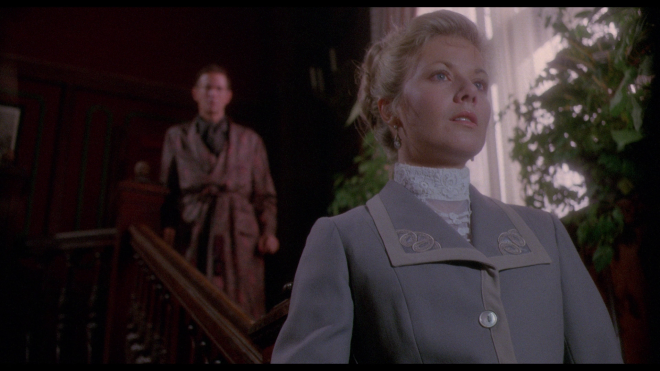 Bringing in an LPCM 2.0 audio mix, Edge of Sanity doesn’t always make for the most sonically aggressive film ever, but it’s got many pleasing attributes. Dialog for this track is always on point without issue. Scoring hits for the right moments and sound effects are a little stylized but nothing crazy, and that may be a weird thing to knock a film for. While it’s trying to push things visually, the film doesn’t always make great use of audio. Some street sequences can feel big and open and captivating, but then some of the clubs Mr. Hyde visits never really come to life in a similar fashion, they can actually feel flat. That’s not a fault of this mix, this mix is what it is, but the overall sound design leaves something to be desired. 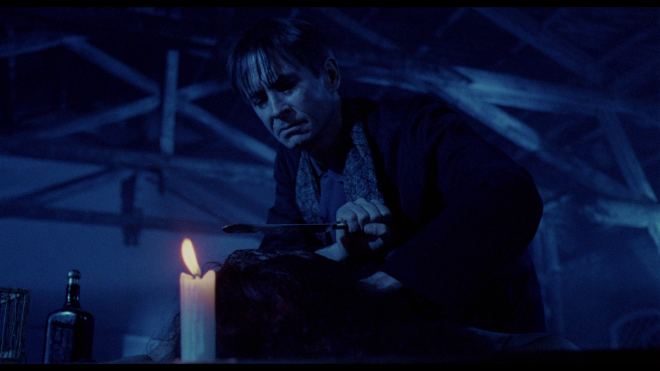 In another win for this release - there are actually bonus features! The previous Scream Factory release didn’t leave any room for extras since those two films were squeezed onto a single disc. With the extra breathing room, we get a pair of Director interviews and some extra little features to plug into that are worth the time. 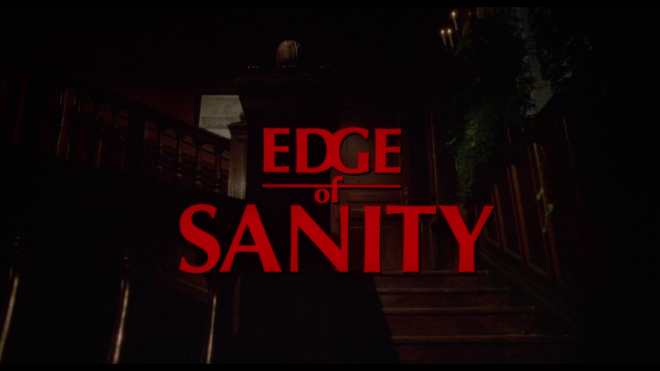 Edge of Sanity isn't the greatest Dr. Jekyll & Mr Hyde film, nor is it the greatest Jack the Ripper film. However, it’s the only film I know of that combines the two storylines. Based on that concept alone, this film could be a lot better than it is. It’s trying to push boundaries but at the same time pushes in weird directions and then not always as far as it could or even should go with the material. Without Anthony Perkins in the lead, I doubt Edge of Sanity would be as watchable as it is or even remembered for that matter. Arrow Video debuts a new Blu-ray release that easy outpaces the previous double feature release from Scream Factory. You get a new and vastly improved video transfer, clean clear audio, and a nice selection of interesting and informative bonus features to slice through. It may not be a great film but I still think it's Worth A Look.