Overview - During the summer vacations a talent show is organized in a local country club and Troy, Gabriella, Sharpay, Ryan, Chad and Taylor take part in it
OVERALL
For Fans Only

January 26, 2006 is a day that will live in infamy for the world of pop culture, as that was the day that Disney dropped the 'High School Musical' bomb on an unsuspecting public. Coming out of nowhere, this unassuming made-for-cable movie was supposed to be just another time-filler for the Disney Channel, but it soon streamrolled into a phenomenon, becoming the most-watched program in the history of basic cable and launching a merchandising machine unrivalled since the days of New Kids on the Block. Between the soundtrack CDs, DVDs, concert tours, tie-in books and the inevitable 'High School Musical' lunchbox, it's estimated that one in three “tweens” (ie: kids aged 8-12) in America currently owns a product bearing the 'HSM' logo.

Amidst all of this hysteria, it's easy to forget that 'High School Musical' itself wasn't actually a bad little TV movie. In fact, perhaps because no because no one expected it to be much of anything, to this day it has an unassuming eager-to-please nature to it that’s positively charming. The fervor with which tweens embraced its old-school ambitions was also oddly reassuring in a way, demonstrating that today's younger generation could appreciate musical styles beyond Britney Spears. 'High School Musical' may not be Sondheim, but its Broadway-inspired tunes at least attempt to foster an appreciation for the form, so the fact that millions of kids are now singing along is some kind of post-modern accomplishment.

Unfortunately, my appreciation for these positive aspects of the original 'HSM' left me quite disappointed with 'High School Musical 2.' Not that I expected high art from the sequel, but it's so slick, and so coldly calculated a "product" that there’s little sense of the wonder and spontaneity that so propelled the original. If the first film was a happy accident, its very success seems to have ensured that nothing relating to 'High School Musical' will ever be an accident again.

To the benefit of 'High School Musical 2,' the same basic creative team is back -- both in front of and behind the camera. Alas, most of the magic has been beaten out of this continuation of the story, due in large part to Disney’s patented formula of prioritizing familiarity over originality. As such, 'High School Musical 2, feels more like a remake of the first movie, only with the situations slightly altered to avoid outright plagiarism.

The plot again regurgitates elements of everything from 'Romeo & Juliet' to 'West Side Story' to 'Mean Girls.' As the story goes, the East High Wildcats are gearing up for big fun as they land the coolest summer jobs imaginable. Troy (Zac Efron), Gabriella (Vanessa Hudgens), Chad (Corbin Bleu), and Taylor (Monique Coleman) have scored "sweet" gigs at the Lava Springs Country Club, but there is one catch. The club is owned by the parents of the witchy Sharpay and her brother Ryan, and we soon learn that Sharpay's motivation in having the group there is simply to get her hands on Troy. Things get more complicated when Troy gets a taste of the good life, and his relationship with Gabriella and the Wildcats is threatened. Will the gang we loved so much the first time around stick it out, or will Sharpay finally succeed in her devious scheme to steal Troy away from Gabriella?

Okay, so 'High School Musical 2' isn’t all bad. The cast is still young, energetic and far more beautiful than 99.9 percent of humans on the planet. The costumes and set design are so colorful they would make the Care Bears gag, and the staging and choreography of the big musical numbers is lively and engaging. And though I didn't like the tunes in this flick as quite much as the first, there are still a few catchy songs, particularly the 'Grease 2'-esque opener "What Time Is It," Sharpay's witty anthem to narcissism called (appropriately enough) "Fabulous," and the sweet duet between Gabriella and Troy, "Gotta Go My Own Way." Finally, in terms of overall production values and the sheer slickness of the enterprise, 'High School Musical 2' is a huge upgrade over the original.

Unfortunately, that's also the problem. 'High School Musical 2' has all the soul of a prefabricated music video. It has been so engineered for maximum impact that little of the realism of the original is present. Granted, 'High School Musical' was certainly a fantasy, but it still managed to create a heightened universe we could believe in, and populated it with characters that tweens could identify with. By contrast, 'High School Musical 2' feels like it was made by a committee checking off elements designed to appeal to the film’s demographic. This hard-sell approach infects the cast, too, who are fully aware of the franchise’s success and are now clearly ready for their close-up. I still like all of these young performers (and look forward to seeing them enjoy careers far beyond the confines of the 'HSM' juggernaut), but even in their best moments here, they come off as self-conscious.

Now that 'High School Musical' is an institution, can the franchise ever get back on track and recapture the zeal of the original? Unfortunately, judging from the spin-offs Disney has announced thus far, the answer seems to be no. There’s a promo spot on this Blu-ray for a monstrosity called "High School Musical: The Ice Tour," which appears to be the demonic spawn of the Icecapades and 'High School Musical.' With plenty of life left to these characters and their story, it’s disheartening to see Disney trotting out such sad gimmicks. I’m still optimistic that Disney can turn things around and remember what made the first 'High School Musical' such a naive treat, but if 'High School Musical 2' is any indication, it would seem that things are only going to get worse. 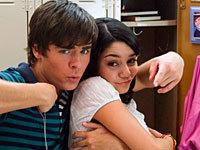 'High School Musical 2' definitely offers a huge leap in quality over the original film. It's brighter, far more polished and it’s in widescreen, to boot (this Blu-ray is the first presentation of any 'High School Musical' to be presented in 1.78:1 and not full screen). The result is a 1080p/AVC MPEG-4 transfer that truly assaults the eyes with its cotton candy visuals -- I don't think I've ever seen this much Bubbalicious-pink in a film in all my life.

The kids of 'High School Musical 2' live in a world that is as production-designed as Willy Wonka's factory, so if nothing else, colors leap off the screen. Saturation is fantastic, with incredibly vivid primaries that retain great clarity and are free from noise and bleeding. The source is immaculate, with perfect blacks and excellent contrast that pops but doesn't bloom. Seeing as the vast majority of the film takes place in sun-drenched exteriors, shadow delineation is hardly an issue, but the film’s few dark scenes also hold up with excellent detail. Indeed, there is nary a second of 'High School Musical 2' that doesn't look completely three-dimensional.

The only flaw I could see is that the image is slightly edge-enhanced, which leads to very thin halos. That one little nitpick aside, this is an excellent presentation and certainly the slickest looking TV movie I've ever seen.

Although wall-to-wall with musical numbers, there’s a nagging lack of dynamism to 'High School Musical 2' that surprised me. The high-end never really feels open and spacious, nor does the subwoofer ever deliver that much oomph. Dialogue is cleanly recorded but along with the music, feels flattened together in the mix with no one element ever really sounding distinct. Surround use is fine for a TV movie, but discrete effects are sporadic, and the songs never really bleed out around the soundfield as I would have liked. Don’t get me wrong -- 'High School Musical 2' sounds perfectly fine, but is this the best presentation of a musical I've heard on high-def? Hardly. 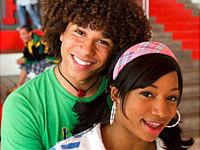 Considering the pop culture phenomenon that the 'High School Musical' franchise has become, I expected far more in the supplements department than we get here. I don't know if it's because all the kids in the movies have now become big stars or what, but none of them appear in any sort of making-of featurettes or commentary, making this package feel somewhat tossed together. (Even worse, Disney hasn't bothered to upgrade the video-based material to high-def -- it's all presented here in 480p/i/MPEG-2 only.)

'High School Musical 2' may be a cold and calculated product, but that hasn't stopped a huge portion of the tween population of the United States from memorizing every line of every song. As a Blu-ray release, this one certainly delivers on the bottom line, turning in excellent video and above-average audio, but considering how huge the franchise has become, I couldn't help but be disappointed by the relatively slim supplements package. Still, it's hard to imagine anyone under the age of 15 having any issue with this Blu-ray release. Buy this one for your kids and I'm sure they'll love you for it.

Sale Price 40.52
Buy Now
3rd Party 27.95
In Stock.
See what people are saying about this story or others
See Comments in Forum
Previous Next
Pre-Orders
Tomorrow's latest releases