Even diehard film noir fans may not be familiar with The Guilty and High Tide, but thanks to the Film Noir Foundation, which has rescued these tough crime dramas from obscurity and restored them with love, a new generation can discover and appreciate them. This impressive Blu-ray release from Flicker Alley honors this pair of minor, yet well-made and entertaining poverty-row pictures with excellent video and audio transfers, a hefty array of substantive supplements, and a gorgeous 24-page booklet. Highly Recommended.

The Guilty and High Tide were made in the same year (1947) by the same producer (Jack Wrather) and same director (John Reinhardt), written by the same screenwriter (Robert Presnell, Sr.), shot by the same cinematographer (Henry Sharp), feature the same leading man (Don Castle) and chief supporting player (Regis Toomey), share the same flashback storytelling technique, run 71 and 72 minutes respectively, and were released by the same poverty-row studio (Monogram Pictures). Both pictures virtually vanished from view after their initial runs on the lower half of double bills, and both have been blessedly rescued from oblivion and beautifully restored by the Film Noir Foundation, which has released them on a single Blu-ray disc as a double feature. Both never will be considered noir masterpieces, but they remain fascinating curios that are far better than their respective pedigrees might suggest and prime examples of how a lot can be made from very, very little if the creative team has talent, gumption, and a staunch commitment to their craft.

The differences between the two films lie in their narratives. The Guilty, based on a tale by Cornell Woolrich (best known for penning the story upon which Alfred Hitchcock's Rear Window is based), chronicles the investigation into a young woman's murder and the efforts of one man to protect his mentally unstable roommate who's suffering from war-induced PTSD, while High Tide charts the efforts of a dogged newspaper editor to shut down a ruthless L.A. crime syndicate. Both brim with noir style, showcase an array of colorful characters, and move along at a brisk clip. Some of the acting isn't great, but it's competent enough. 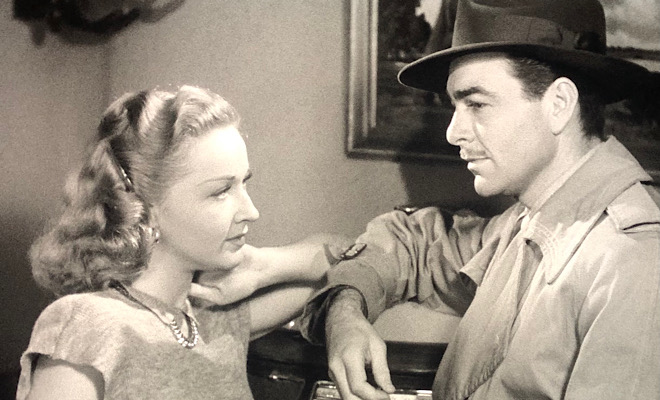 The Guilty, which stars former child star Bonita Granville as twins (one sweet, one sassy) involved with the same man, adopts a more atmospheric, sinister tone and contains arguably the most grisly description of a killing in any 1940s film. Though the paltry budget lends several scenes a cheap look, Reinhardt - much like director Anthony Mann during the same period - doesn't let his bottom line stymie his artistry. Flashes of creativity - a process shot allowing the two Granvilles to share the screen, an impressive overhead angle of a cramped restroom, a brief subjective perspective, elegant framing, and the clever use of shadows - keep the eye engaged while heightening suspense. The ending might be a bit gimmicky, but it doesn't ruin all that comes before it or tarnish Reinhardt's technique.

High Tide is less moody and more overtly rough, thanks to its mafia focus and heartless depiction of power-hungry newspapermen. Reinhardt still milks his measly budget for all it's worth, but the film relies more on the intricacies of its plot to propel it forward. High Tide also benefits immeasurably from the participation of actor Lee Tracy, who was a huge star in the pre-Code era before his Hollywood reputation was irreparably harmed by a notorious scandal during the shooting of Viva Villa in 1934. Tracy's rubbery mug, pugnacious attitude, mile-a-minute mouth, nasal vocal tones, and priceless facial expressions make him a riveting presence, and though he's certainly slumming in this Monogram film, he plays every scene with admirable conviction. 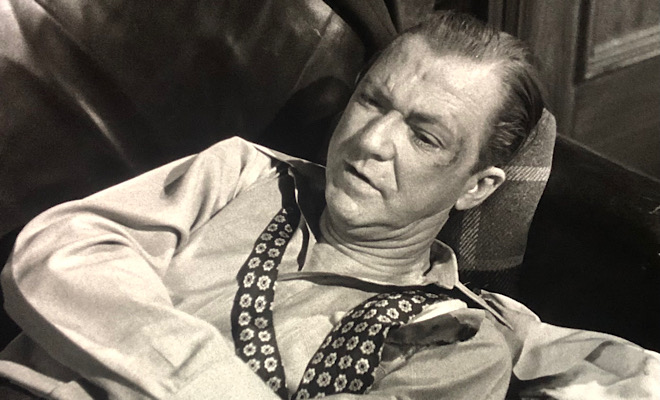 Despite the name value of Tracy, the real “star” of both pictures is a journeyman actor named Don Castle, who had toiled for a decade as a low-level supporting player before getting what he hoped would be his big break in these two movies. (Spoiler alert: it didn’t happen.) Castle, who resembles Clark Gable and Robert Taylor (with a dash of Gilbert Roland thrown in), struggled to forge his own screen identity throughout his career, and although he’s a good actor with a square-jawed toughness and sad eyes (perfect qualities for noir), he lacks magnetism.

Granville, who rose to fame as a child actress with her deliciously nasty portrayal of a conniving boarding school student in These Three (the first screen adaptation of Lillian Hellman’s The Children’s Hour) and then portrayed teen detective Nancy Drew in a series of successful films, seems to relish playing twins in The Guilty, and nicely balances the good girl-bad girl qualities of her characters. John Litel, who co-starred with her in the Nancy Drew movies, is especially good as the tortured World War II vet struggling to manage his PTSD, and the always reliable Toomey plays basically the same character in both movies, a no-nonsense police detective who doesn’t have as much to do in either film as we would like. 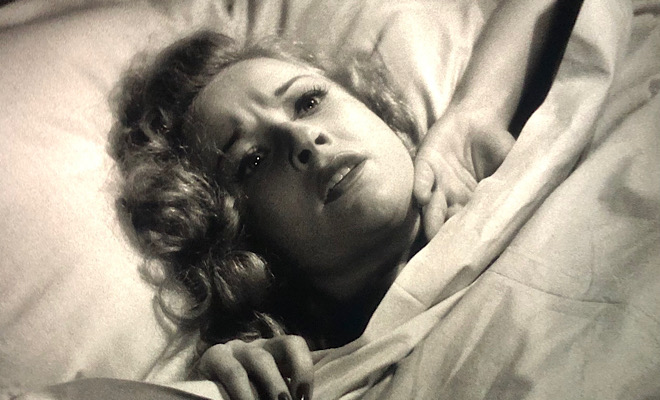 If you’re a film noir fan, you’ll get a big kick out of both The Guilty and High Tide. They’re far from classics, but they’re also far better than many low-budget genre entries produced during the same period. Huge kudos must go to the Film Noir Foundation for unearthing and restoring these lost films, preserving them for posterity, and giving them such a stellar and splashy Blu-ray release. So pop some popcorn, dim the lights, and revel in the seductive moral murkiness and twisted longings of noir. 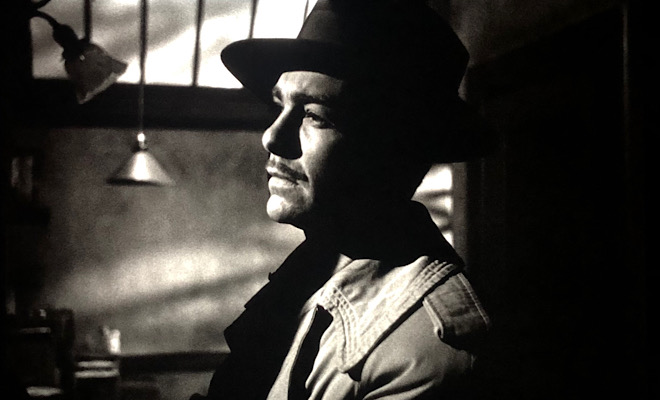 Vital Disc Stats: The Blu-ray
The Guilty and High Tide arrives on Blu-ray on a single disc packaged in a standard clear case with reversible cover art. (A standard-def DVD containing both movies and all the extras is also included.) A beautiful 24-page booklet printed on glossy paper featuring essays on both films by Brian Light, several black-and-white scene stills, color reproductions of posters and lobby cards, and reproductions of pages from The Guilty's press book is tucked inside the front cover. Video codec is 1080p/AVC MPEG-4 and audio is DTS-HD Master Audio mono. Once the disc is inserted into the player, the static menu without music immediately pops up; no previews or promos precede it.

The folks at the Film Noir Foundation and UCLA Film and Television Archive have done a spectacular job restoring The Guilty and High Tide. While I haven't seen any restoration comparisons, both films are accessible in their entirety on YouTube, and a brief sampling gave me a pretty good idea of the shoddy shape both of these Monogram Pictures productions were in before they received their respective makeovers. (High Tide was downright unwatchable.) The resulting 1080p/AVC MPEG-4 transfers may not be perfect, but compared to their YouTube counterparts, they're darn close. (According to the Flicker Alley press release, "The Guilty has been restored from a 35mm nitrate composite fine-grain master." No information is provided about the High Tide source material.)

Stunning clarity and contrast, excellent shadow delineation, and a natural grain structure that preserves the feel of celluloid distinguish both transfers, and combine with inky blacks, bright, stable whites, and nicely varied grays to produce pleasing pictures that feature a fair amount of depth. Though the remarkably clean images still sport some errant nicks and scratches, a few faint lines, and a bit of wear-and-tear, their overall appearance rates much higher than more accessible titles released by other companies.

Some shots are softer than others and a few look a little ragged (in addition, a boom mic is clearly visible at the top of one frame in High Tide), but they rarely disrupt the elegant flow of each film's presentation. High Tide employs plenty of rear projection shots, but they generally mesh well with foreground elements, and the seamless process shot allowing two Bonita Granvilles to share the frame in The Guilty is quite impressive. Background elements like wallpaper patterns, newsroom clutter, and the wear-and-tear in rundown flophouse rooms are distinct, and sharp close-ups highlight facial hair and stubble, blemishes, and the creamy complexions of the leading ladies. It's such a treat to be able to see these beautiful restorations that allow us to fully appreciate the care and artistry that went into these low-budget quickies that are a cut above others in their class.

The mono tracks for both movies have been nicely restored as well. Any age-related surface noise (the aforementioned YouTube clips are marred by consistent pops and hiss) has been meticulously erased and no distortion creeps into either mix. Excellent fidelity and tonal depth distinguish both tracks, and a wide dynamic scale handles all the highs and lows of the two music scores with ease. Sonic accents like gunfire, fisticuffs, and revving car engines are wonderfully crisp, as are subtleties like footsteps, the squeaky soles of Toomey's shoes, and the rattling of a shutter in The Guilty. The background newsroom noise in High Tide - ringing telephones, ruffling papers, the clatter of typewriters and teletype machines, and indistinct voices - is impressively rendered, and all the dialogue is easy to comprehend. Both tracks greatly enhance their respective films and add to the enjoyment of this Blu-ray presentation.

A superior and quite substantive supplemental package enhances this double feature.