A young woman is questioned by the police and the judges, suspected of being a modern day witch. The girl who shared her apartment has been found dead, and a pair of scissors impaled through her heart, as she lay attached to the bedposts. Apparently, the girl does have powers, to make all people around her fall prey to her spell, glissing progressively into desire, lust and the unknown.

For the first fifteen minutes of Alain Robbe-Grillet's 'Successive Slidings of Pleasure,' the 1974 film is a wordless, mostly silent, and jarringly edited sequence of a murder scene. The screeching sounds of sirens rushing to the apartment of the victim and her roommate being the only noise heard just prior. A police investigator stroking his thin mustache examines the room and the body still tied to her bed, brutally stabbed by a pair of scissors, or the broken bottle on the floor, while the other young woman stands petrified in the corner with a stunned, fearful look on her face. Moments before, audiences sat through an incoherent collection of seemingly random, raucously nightmarish images interspersed with an opening credit sequence that interestingly mixes title cards. With hardly an explanation, the scene suddenly changes to the young woman incarcerated in a convent, locked in a white room save for her blue dress.

Like his other films, Robbe-Grillet brings his nouveau roman style to the silver screen to create a work that moviegoers are meant to experience rather than passively watch from the comfort of a chair. And this highly-stylized film, which often feels as if it belongs in an exhibition of absurdist art, is certainly an involved encounter, turning what initially seems like a typical erotic thriller into a sometimes vexing cerebral portrait of a young woman's fractured mind. The editing is intentionally crude and inharmonious, an oddly rhythmic chain of jump cuts and unusual camera movements with little logic or narrative flow. Sometimes, they repeat the same sequence as if accidentally done by an amateur or a ruined reel — this marked the director's sixth motion picture — unremittingly reminding audiences they're experiencing a fictional work. Like his detective mysteries, Robbe-Grillet deconstructs the genre into self-awareness.

What follows is a successive series of phantasmagoric, postmodern images that escape criticism of being ostentatious not only because it's a precursor to such pretentious filmmaking but also because it actually serves a legitimate purpose to the plot. Although paralyzed by fear and shock at the sight of Nora's (Olga Georges-Picot) bloody corpse, the roommate, known only as The Prisoner (Anicée Alvina), stands witness to all that transpires around, sending her, along with viewers, through a harrowing oneiric whirlwind of psychological trauma. From her arrest and accusation of murder to building her defense and allegations of misconduct from religious supervisors, the entire film is told from the young woman's unique perspective. It's a surreal, highly-subjective point of view that expounds on her mental state, suggesting the dreamlike experience of life in turmoil when the mind suddenly breaks from reality. 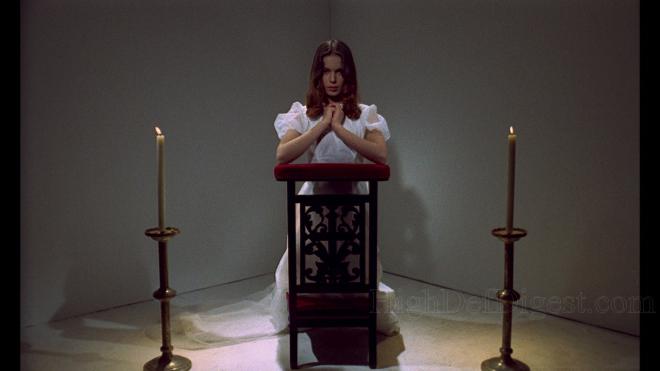 Hence, sequences are out of order, at different times and actors can play multiple roles. It's a gonzo nonlinear structure that still follows a traditional formula but with an anticlimactic end. The scene of the police inspector walking through a room is repeated, and flashes of Nora's body are a sporadic display of meaninglessness. Extreme close-ups of a shattered glass bottle hint at the murder weapon while functioning as foreshadow to future events all at once. Conversations with nuns and priests are random commentaries on a sexually repressed organization comically overseeing the sexually uninhibited who have been deemed criminals. Alain Robbe-Grillet's 'Successive Slidings of Pleasure' flirts with possibilities though seeming to imply nothing while toying with the mystery, drama and fantasy genre immersed in sexually provocative themes. It's a film that pushes the boundaries of the avant-garde, a liberated sort of free-association and stream of consciousness that challenges our notions of film and propriety.

Kino Lorber brings Alain Robbe-Grillet's 'Successive Slidings of Pleasure' to Blu-ray under the distributor's "Redemption" label. Housed inside a normal blue keepcase, the Region A locked, BD50 disc goes straight to a static menu screen with music playing in the background.

Made from a new master of the original 35mm camera negatives, Alain Robbe-Grillet's erotic-fantasy thriller bares it all on Blu-ray with an impressive and highly-detailed 1080p/AVC MPEG-4 encode. Showing distinct, well-defined lines in nearly every scene, the elements appear to be in superb condition with very fine layer of grain throughout, providing the presentation with an appreciable cinematic appeal. Facial complexions are healthy and revealing, and contrast is spot-on with crisp, clean whites and excellent clarity of the background information. Black levels are accurate with penetrating shadows that don't ruin delineation, giving the 1.66:1 image some noticeable depth. The color palette is also nicely saturated and cleanly-rendered, particularly the primaries, giving this high-def transfer much to admire.

The excellent video is complemented with an equally good uncompressed PCM mono soundtrack that delivers a surprisingly warm and expansive soundstage. With a pleasingly wide sense of presence, imaging is detailed and continuously active with a variety of noises and movement in the background that maintains viewers engaged. Michel Fano's haunting score and the several bits of commotion in every scene broaden the soundfield. Dynamics and acoustics are extensive with excellent fidelity and separation between the highs and mids while the low-end provides palpable weight to the eerie, ethereal music and a couple of the creepier moments. Vocals are pristine and precise in the center, making this an outstanding lossless mix fans will thoroughly enjoy.

Alain Robbe-Grillet's 'Successive Slidings of Pleasure' flirts with possibilities,  toying with the mystery, drama and fantasy genres immersed in sexually provocative themes. A leading figure of the French New Wave, the director brings his nouveau roman style to the silver screen which moviegoers are meant to experience rather than passively watch from the comfort of a chair. The Blu-ray arrives with a shockingly excellent audio and video presentation, but the bonus section is sorely lacking. Nevertheless, fans of the French filmmaking period and of the director should be pleased with the package. Worth a look.

Sale Price 15.56
List Price 34.95
Buy Now
3rd Party 36.53
In Stock.
See what people are saying about this story or others
See Comments in Forum
Previous Next
Pre-Orders
Tomorrow's latest releases