1991’s Drop Dead Fred drops onto a lively Blu-ray from Vinegar Syndrome, a film restoration and distribution company with loads of cinematic oddities. Truthfully, Vinegar Syndrome gives movies better treatment from a packaging and restoration perspective than most acclaimed films on disc. So, here you are with the snazziest release of a flick that many people have likely never heard of, and it’s awesome. Recommended!

This slapstick comedy will hit products of the ‘90s square in the heart, just as Little Monsters did for the misfits of the ‘80s a few years before. Drop Dead Fred and Little Monsters feature reckless entities who challenge children feeling alone or unheard. It’s like imagining Beetlejuice combined with some of the emotional pull of Mrs. Doubtfire. It’s a tricky tone to pull off, especially here, because, on the one hand, Drop Dead Fred has a Saturday morning cartoon vibe. Just look at the goofy but lovely opening credits sequence, where a playful jingle is accompanied by cheesy sound effects, such as pies in faces and banana peel slips. But then, mature themes will enter the picture to keep it grounded. Feel your heart sink when a mother tells her kid, “Sometimes, I don’t think I love you as much as I used to.” 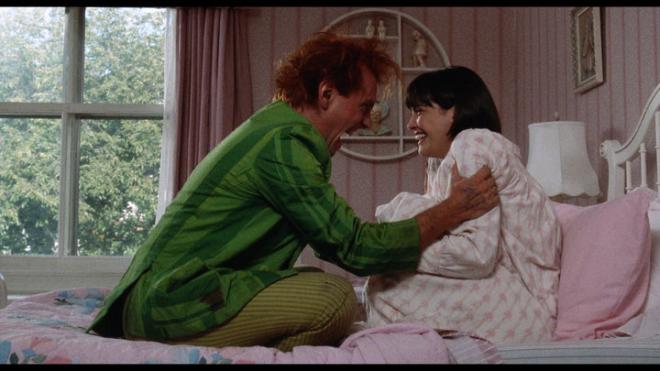 “Yuck! What happened to you?”

As a kid obsessed with this movie, Phoebe Cates’ character’s emotional trauma didn't register with me. Her Elizabeth will twist herself like a pretzel for people. Elizabeth’s car-selling fiancé, Charles (Tim Matheson of Animal House), constantly puts her on the back burner to chase other women. So, when Charles says that he’s seeing someone else, Elizabeth cannot recognize that her life is so much better off without him because her uptight mother’s behavior kept her from being able to speak her mind and have thoughts of her own.

Drop Dead Fred (an excellent Rik Mayall) swoops in to help Elizabeth find her identity. Underneath all his destructive antics (glass breaking and poo smearing) is a work that serves as a scary examination of repressed female assertion, parental abuse, and how a cry for help can be misread as being problematic. You just don’t expect a movie like this to have such a meaningful message about how it’s up to you to carve an exciting life and step away from what’s holding you back from being your best self. And for that, the movie has worth that has gone mostly unseen. 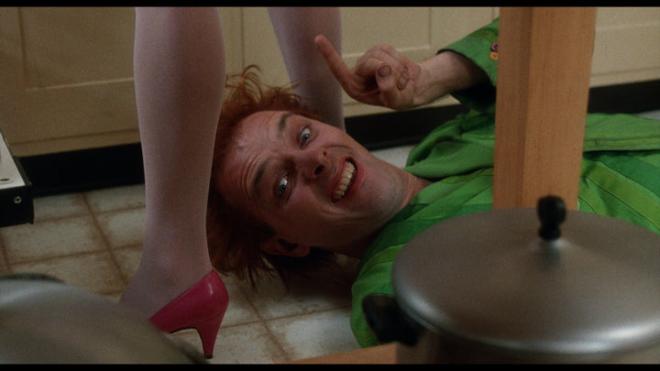 Some may see this as too looney to settle with. But I promise once you get past all the booger flickin’ and upskirt peeking, its emotional intelligence surfaces. But the humor can hit you in unexpected ways. It’s all in how the late Mayall delivers his lines. There’s an art to what he does, much like Robin Williams. Mayall yelling, “snot face,” and “mega beast” (he uses another b-word later), has such an infectious energy. And thankfully, the movie knows how to use him. Instead of being completely overwhelming, Drop Dead Fred does what he needs to shake things up and ducks out when the dirty stuff hits the fan. He simply wants to bring some thrill to your life and have you recognize your self-worth.

Vinegar Syndrome tends to go for the stupid-fun movies, like Auntie Lee’s Meat Pies and Ticks. But every once in a while, the label will surprise you with a flick that offers more than entertainment and laughs. 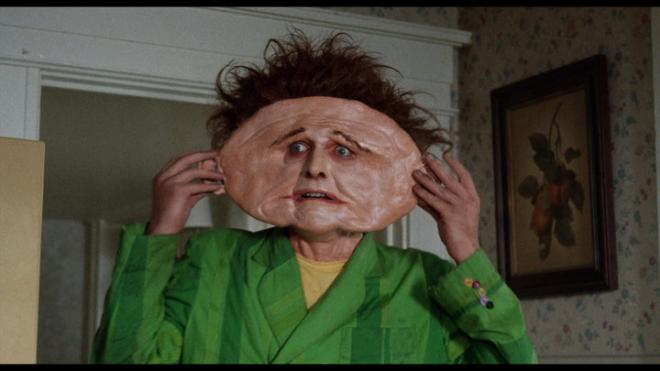 Vital Disc Stats: The Blu-ray
Limited to only 5,000 units from Vinegar Syndrome (with over 1,000 left in stock as of this writing), the special edition release comes complete with an embossed slipcover (designed by Robert Sammelin), and it perfectly leans into the film’s childlike wonder. The Blu-ray case includes reversible artwork, including the new design (featured on the slipcover) and the original poster design. Inside the case is an eight-page booklet containing pictures and a new text interview with Phoebe Cates. (She discusses working with Mayall and Dutch filmmaker Ate de Jong.) If you don’t care for all the bells and whistles, a standard Blu-ray release of the film will be available Mar. 29. 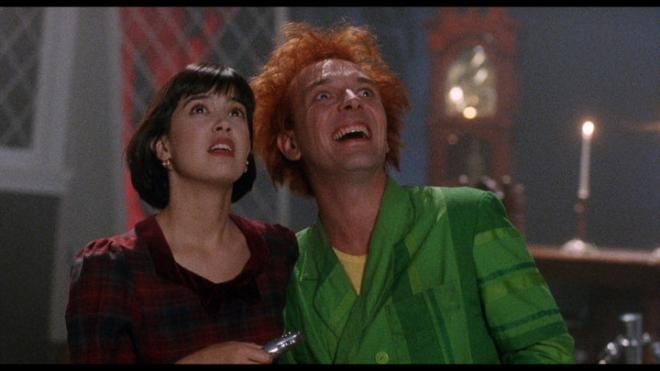 Newly scanned and restored in 2K from its 35mm interpositive, Drop Dead Fred’s presentation is, for the most part, a pretty fantastic-looking release. The palette is nicely suffused throughout, with a nice balance of green and purples and excellent contrast and consistent densities. The grain field is sometimes noticeable, looking a bit splotchy under heavy light. But it’s never distracting enough to deem it an eyesore. However, the details are quite electric, revealing the textures of mundane items (like Elizabeth’s totally ‘90s white shoes and tall socks, and Drop Dead Fred’s hilariously stretched-out face). Overall, fans should be thrilled with the appearance. 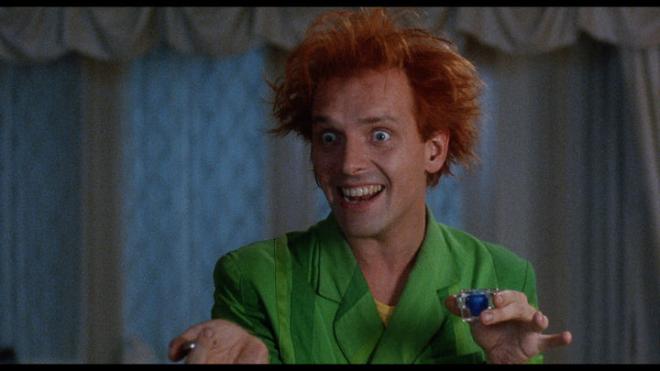 “You see when something’s not working right, the best thing to do is tear it apart to make it better.”

The DTS-HD Master Audio Stereo secures a wide listening experience with crashes and smashes that just may have your other household members thinking you’re up to no good. Voices are crisp, with character emotional responses being well balanced. Scoring efforts support with its Prehysteria!-like absurdity and position. (Good luck shaking the catchiness of the theme song.)

The well-wrangled bonus features cover a lot of ground. Most of it consists of sit-down interviews with select members of the cast and crew dishing about working with Mayall and crafting a smart movie disguised as a fool. Each interview has its purpose and isn’t just thrown in there. Vinegar Syndrome keeps the conversation engaging – especially one between director Ate de Jong and producer Paul Webster, who share about navigating sweetness with mania. (One comment about how Jim Carrey was supposed to star in a sequel was interesting, as was Tim Matheson talking about working with Chevy Chase (not in this movie) and how he “always had to be the center of attention.” 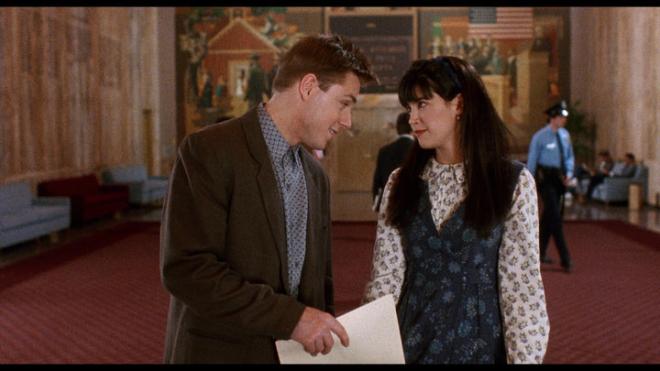 The deleted/alternate scenes are another sweet spot. The nearly 30-minute reel is taken from VHS tapes. (This is because no one had the storage base for footage that they have now.) Like many deleted scenes, it’s cool to see what could have been. Most of the time, you can see why it was omitted. However, every once in a while, you’ll catch one that could have benefitted the narrative, such as a sequence with Elizabeth and her friend/love interest (Ron Eldar). There are also some really good jokes that should have stayed in, including a legitimately funny clip involving lipstick and a woman in a bathroom.

Drop Dead Fred may not offer the joy and comfort that warrants watching it repeatedly, but it’s a good, entertaining, and (sometimes) thoughtful sit. It’s more for those ‘90s tape heads who are looking to reach back through the rearview mirror. Who knows – it just may spark a good conversation about psychology with your viewing pals. The icing on the cake is that Vinegar Syndrome gives it the treatment that makes it sparkle like Rik Mayall’s unforgettable green suit.