From the Sultan of Sleaze, the Baron of Filth comes one of the most controversial and grotesque films to be inducted into the Library of Congress National Film Registry - John Water’s Pink Flamingos! Celebrating its Gold Anniversary, the film is still as shockingly hilariously depraved thanks to Water’s deliriously funny concept and his dedicated cast of Dreamlanders headlined by the late great Divine. Now The Criterion Collection presents Pink Flamingos in all its glory with an impressive A/V presentation and a terrific collection of new and archival bonus features. Highly Recommended - if you can stomach it

Her name is Divine. On the lam from the law, order, and all human decency she has been christened the “Filthiest Person Alive.” Living in a trailer in the middle of nowhere, Divine lives a life of sleaze with her egg-obsessed mother Edie (Edith Massey), her son Crackers (Danny Mills), and their just-as-depraved companion Cotton (Mary Vivian Pierce). But now a new pair of Baltimore sickos Raymond and Connie Marble (David Lochary and Mink Stole) aims to lay claim to Divine’s title through every disgusting act in the book. But Divine wrote the book of filth and she’s more than ready to open a new chapter and reclaim her title!

I mean, what can you say about Pink Flamingos. For fifty years this film is so notorious for its content that everyone that’s heard of it knows what happens even without seeing it. For lack of a better word, Divine’s final moment in John Water’s little opus is so grotesque it’s appalling to even think about. But for the uninitiated, it may come as a surprise that such an infamous moment is hardly even the most shocking and lurid scene in the film. It just happens to be the final moment in a grand parade of joyful depravity and frankly nauseating content.

To say Pink Flamingos is not for the weak-stomached is an understatement. I’m nearly 40. I saw this movie for the first time when I was 14. In 26 years I’ve seen this film maybe a dozen times and it still makes my stomach twist. Screenings of the film lovingly handed out “Pink Phlegm-ingo” Barf Bags and thankfully Criterion includes one for this Blu-ray release! This isn’t a movie you’re going to want to slam down a bucket of buttery popcorn for. And while it may be stomach-churning, it’s still damned funny. 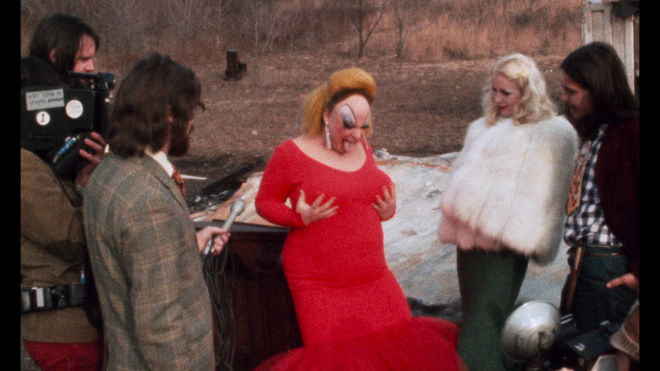 While there are a number of depraved acts - well practically every scene has at least one - it’s actually quite surprising how “normal” some of this material has become. If John Waters was great at one thing it was capturing the little idiosyncrasies that no one wants to talk about but obviously exist. Sexual fetishisms were such a cultural taboo fifty years ago that the sight of David Lochary and Mink Stole slurping on each other’s feet could be offensive. Today we have cam channels and Only Fans to destigmatize taboos. The notion of same-sex couples raising children was (and sadly still is for some) such a horrible offense that Waters used selling babies to lesbians as the punchline for the Marble’s depraved acts. While it’s not “selling babies” anymore, surrogacy is a common practice for people biologically unable to raise a child. Don’t worry, there’s still plenty of appealing graphic material in this film, but I found it damned funny this time around at how much has aged out and is perfectly acceptable today.

Pink Flamingos probably isn’t the best of John Water’s catalog, I’m partial to Female Trouble myself, but it's certainly the one with the most notorious reputation. Waters was a shock auteur in his early career and his first films have all the hallmarks of an ambitious filmmaker stretching every penny of a tiny budget while getting the best performances he could from his team of amateur Dreamlanders. I’ve heard it argued that when he went “mainstream” Waters lost his edge. While Hairspray and Cry-Baby are relatively family-friendly outings, I’d argue that as a satirist, Waters merely traded a blunt hammer for a sharpened knife. There’s still plenty of subversive material in his later films, they’re just missing the shock value that makes a movie like Pink Flamingos a notorious household name - even if no one in the house would admit to seeing it. And now with this fully restored Blu-ray release, it’s time to round up the kids and the family dog and experience one of the greatest cinematic undertakings ever committed to celluloid. 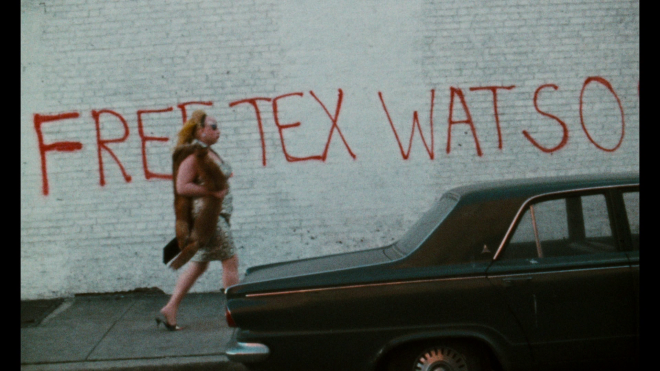 Vital Disc Stats: The Blu-ray
In keeping with the rest of their John Waters releases, The Criterion Collection gives Pink Flamingos a terrific single-disc Blu-ray release. Pressed on a BD-50 disc, the disc is housed in a standard clear case with the title artwork and disc details on a paper package-themed slipcover with spine number 1131. The disc loads to an animated main menu with Criterion’s standard navigation system. 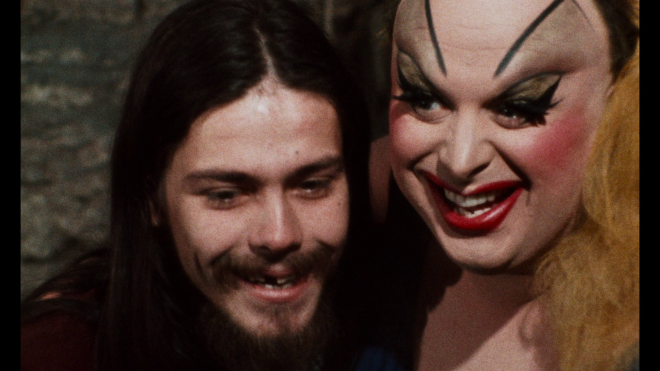 It’s weird to call one of the ugliest movies ever made “beautiful,” but roll with me on this. Fully restored from 4K scans of the original 16mm source elements, this is a unique case for John Waters films. Unlike his other releases, Waters has kept his original elements complete with his own splices stored in his attic for the last 50 years - and it’s in remarkable shape! This new 1.66:1 1080p transfer is the best this film has ever looked - likely even better than when it was shown in theaters. It’s cleaner with numerous instances of tears, scratches, and speckling cleaned up but it isn’t so clean and sparkling that it looks like it’s been polished, it’s still a noisy grungy looking film as it should be. Improvements in color saturation were the first big improvements I noticed. 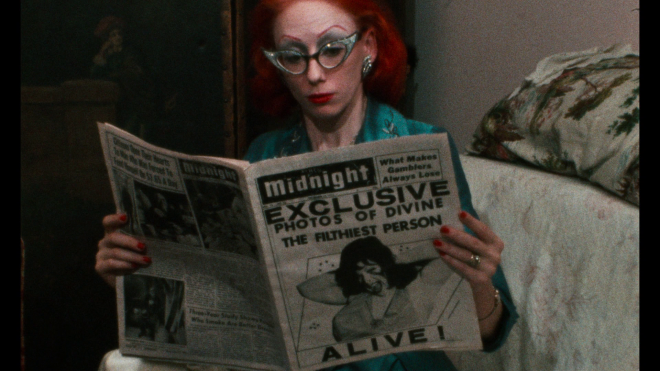 Primaries really pop with bold blues, yellows, and Divine’s iconic red dress. Skin tones are healthy without being pushed too red or washed out. There are some interesting uses of “blue” that you may or may not want to keep an eye out for. Details are generally impressive but limited given the film’s extraordinarily slim production design and budget. Film grain is retained and “noisy” as expected for a 16mm film handled by an amateur crew. Focus issues lead to some overly soft shots and there are still a fair number of rough-looking cuts and a few scratches and speckling that pops up, but in all honesty for a film like this - that’s just more flavor for the film than a detriment. 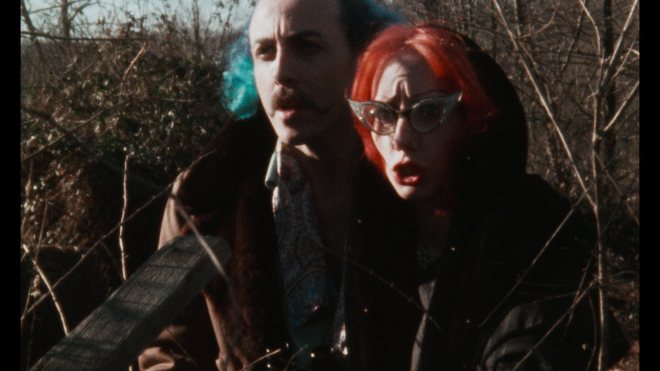 Pink Flamingos comes home with a respectable LPCM mono track that isn’t going to light the world on fire but is true to form for this film. Again this isn’t a track you’re going to want to compare to a polished production. Dialog is relatively solid and clearly heard but that also depends on location and which cast member is speaking. Thankfully most everyone shouts their lines to the back row so that isn’t an issue, but there are a couple of reads where the mic is missing the actor and can get a bit mumbly. But like any remaining video imperfections that’s just frosting on the cake. There’s still some subtle hiss here and there but all in all a solid track. 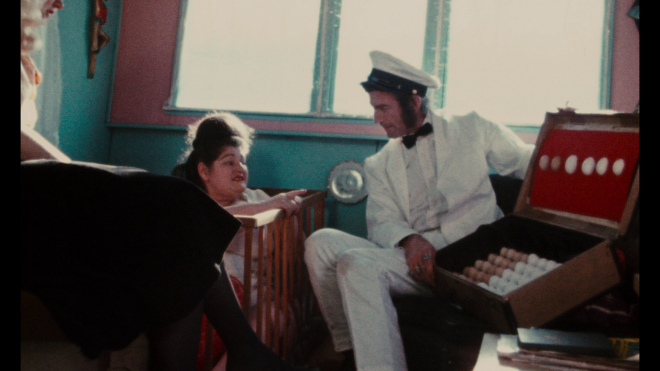 Not to leave anything at the door, Criterion has assembled a fine selection of bonus features. Most of these are archival but there are a couple of new segments with an interview with Waters by Jom Jarmusch, and a locations tour with Waters. you get two audio commentaries with John Waters, one from the original Criterion LaserDisc and a newer one from 2001. They cover similar ground but between them, Waters brings different details to light for any given scene so they’re both well worth giving a listen. 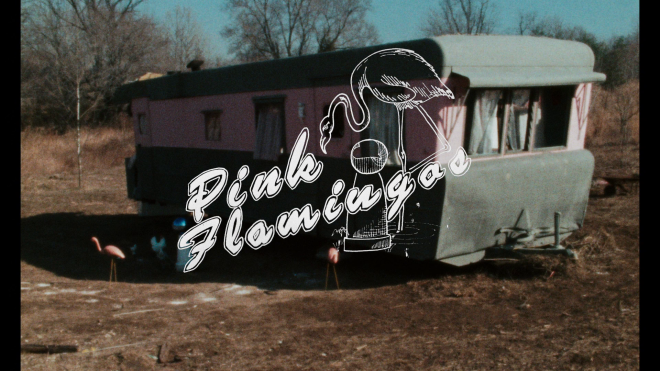 There’s a lot that can be said about John Waters’ Pink Flamingos - but then there are just some things you can’t talk about. Waters with Divine and his cast of Dreamlanders craft a shockingly hilarious satire of social taboos where nothing was held back. Now 50 years later the film is celebrated earning a spot in the National Film Registry and dutifully picking up a splendid Blu-ray release from The Criterion Collection. For better or worse… the film looks and sounds better than ever with a nice selection of bonus features including two John Waters commentary tracks. If your stomach can handle it, this one is Highly Recommended.