Miami Blues' tagline reads: “He’s making arrests. He’s solving crimes. And he’s the criminal.” Who wouldn’t want to watch a young, handsome, and Ryan Gosling-like Alec Baldwin play a goofy criminal where he waves around a stolen police badge to bust the bad guys and steal their scores? Toss in some hilarious Al Pacino/Scarface impressions, an adorable Jennifer Jason Leigh doing her best Holly Hunter, and a colorful Blu-ray release from the MVD Rewind Collection, and you got yourself something worth owning. It’s funny and a bit nonsensical, but utterly charming. Recommended!

What a forgotten gem 1990’s Miami Blues is, and probably one of the most likable movies in the MVD Rewind Collection. Watching Baldwin act without thinking, playing smooth-talking con man Junior Frenger is hilarious. He’ll break your finger like he’s Major Payne and completely leave the action in the rearview to move on to the next glowing opportunity. But what really seals the deal is how the detectives (Fred Ward and Charles Napier) following Junior’s breadcrumbs react to his crimes and interact with him. 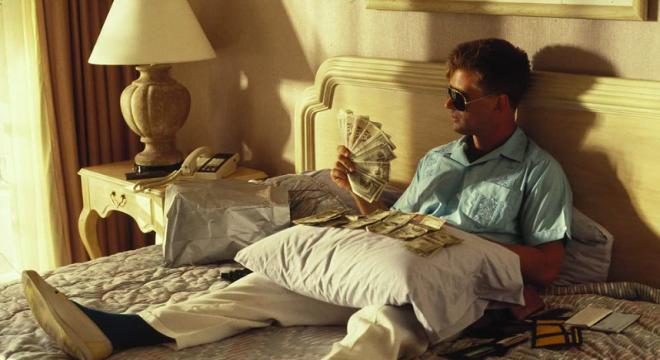 In one fantastic sequence about halfway through the movie, Ward’s Sgt. Hoke Moseley invites himself over to dine on pork chops and brewskies with Junior and Junior’s ex-prostitute lover, Susie (Jennifer Jason Leigh). Moseley is quite the meaty character for Ward to play, considering how he will un-embarrassingly take out his false teeth to drink a beer in front of the new company. Baldwin's faces sprinkle the moment with giggles, but not as much as a time-passage cut revealing Junior eating dinner with Moseley without a shirt. There’s no explanation for why the shirt came off, and who cares? This is part of the film's charm. It's these unexplained details that solidify Miami Blues as a golden comedy.

It may lose momentum in his third quarter, but the jokes and overall wackiness remain intact. It’s like watching The Naked Gun but with more edge. Each character shines and gets their own piece of cheddar to throw on their delivery. Whether it’s Junior writing haikus while robbing a neighbor’s house, or one terrifically romantic montage sequence involving Susie and Junior dancing in a darkly lit kitchen while snacking on cotton candy, every frame is milked to inject your funny bone with some calcium. 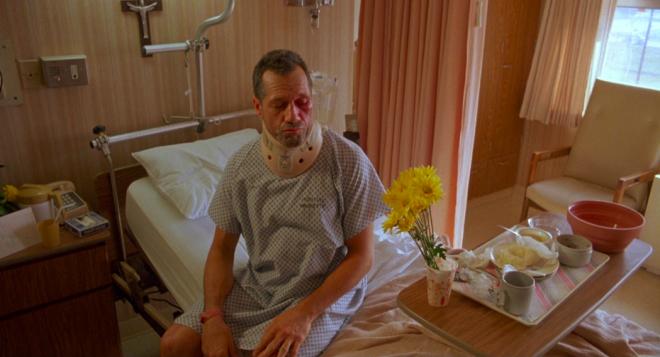 It’ll be fun to throw Miami Blues on for a get-together with friends who are itching for something fresh and funny. The disappointment margin is just too small for it to fail you. 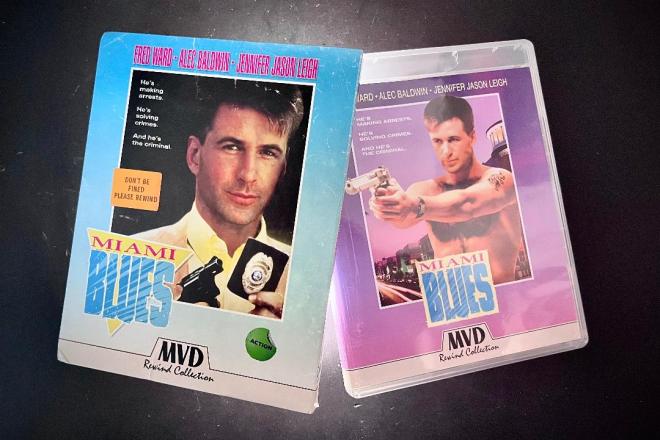 The now-available Blu-ray release is housed inside a cardboard slipcover and a clear plastic casing with reversible cover art and a mini poster. While it's hard not to notice Baldwin holding a gun on the cover of the movie, there’s no denying all the bright blues and totally ‘90s text turns on the attention tractor beam. The old VHS tape-like effect, complete with surface wear and video store stickers, is what pulls you in the most. 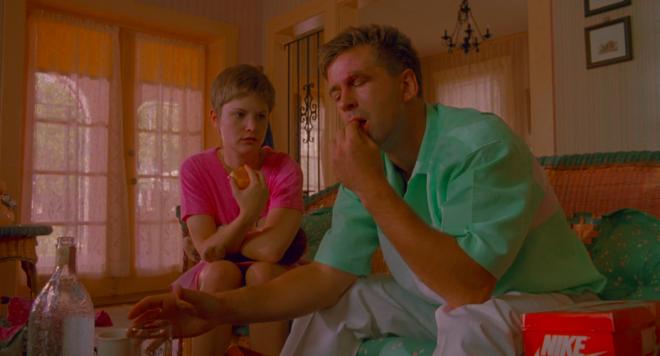 Miami Blues is a high definition (1080p) transfer presented in its original 1.85:1 aspect ratio. For the most part, the film has a razor-sharp polish. It’s mostly the wide shots that pop with stunning clarity like it was just filmed yesterday. It’s only interior close-ups that have any sort of oddity to them. For instance, Junior’s shirts are super bright. He’s wearing button-downs that feel borrowed from the Magnum, P.I. clothes rack, and there’s a brightness-and-contrast warp effect when there’s a lot of movement going on. It almost looks like there are fumes attached to any bright costumes. It’s noticeable but not distracting enough to eject the disc.

Other than the saturation dial getting kicked up a little too high a few times, Miami Blues has the goods. 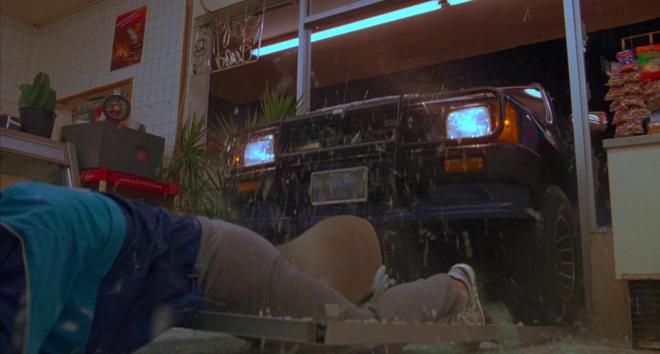 Miami Blues isn’t really a sound show-off presentation, but firefights and the film’s soundtrack boom with its LPCM Master Audio 2.0 Stereo track. The film is bookended by Norman Greenbaum’s overplayed “Spirit in the Sky.” The dialogue is nicely detailed and has a full body to it. For how fast and furious Baldwin delivers his zingers, you want to be able to catch every word without the need to touch the volume button as much or turn on the subtitles. No distortion or annoying sound effects to report other than maybe some overused bird chirps. You’ll know it when you hear it. It’s the same bird noises that are used in house shows like Home Town.

The disc isn’t exactly stacked. But for what’s there, it covers all the ground you really need to know.

Miami Blues gets plenty of goofy mileage out of its committed ensemble, anchoring its steady flow of laughs amid its gonzo energy. It’s a deliciously satisfying stupid movie, and its well-restored Blu-ray is wrapped up in a coat of coolness by the MVD Rewind Collection. Featuring a solid A/V presentation and a decent selection of bonus features, this is an easy one to call Recommended!