When the free world is in danger, there’s only one man we can count on to lead the French Resistance and topple the East German regime - Val Kilmer in Top Secret! Jim Abrahams and the Zucker Brothers turn their focus from Airplane disaster movies to cleverly skewer Elivis movies, beach flicks, and classic WWII films in this wild and crazy musical-comedy. Kilmer’s debut film delivers the gut-busting hilarity - but its Blu-ray debut leaves much to be desired with a dodgy video transfer and a less-than-impressive surround mix and the same set of stale old bonus features. This one is Worth A Look strictly for the film and not at all for the A/V presentation. If you already have it on DVD - wait for a better run.

“Are you lonesome tonight, is your kitchen a sight
Is your wardrobe all rundown and bare
Is your lipstick all smeared, are your stockings not sheer
Do they make your legs show all your hair
Do the tears on your pillow roll down as you turn
Do they short out the blanket and make the sheets burn
Is your heart filled with pain, will you come back again
Shop at Macy's and love me tonight!”

East Germany’s power and might are on the rise. Under the leadership of the diabolical General Streck (Jeremy Kemp), they have a plan to use a new weapon designed by the imprisoned Doctor Flammond (Michael Gough) to destroy NATO and reunite Germany under one rule. Hiding their plans behind the disguise of a peaceful cultural festival, the East Germans didn’t count on the smooth tunes and the willpower of American Rock ‘n’ Roll icon Nick Rivers (Val Kilmer) to lead the French Resistance, save the girl (Lucy Gutteridge), and preserve freedom and democracy!

The comedy minds of Jim Abrahams with Jerry and David Zucker are certainly a unique crew. You’re either onboard for their brand of comedy or it’s just not for you. After the successes of Kentucky Fried Movie and Airplane! - the trio turned their farcical attention to TV cop shows with the unsuccessful Police Squad! When that hilarious show failed to land an audience they pulled an ace out of their sleeves with Top Secret! Where their previous efforts aimed at one singular genre, this comedy spy war film musical fires a shotgun at a wide swath of popular genres from the 50s and 60s. Imagine if Elvis Pressley was cast in Hitchcock’s Torn Curtain and replaced Steve McQueen in The Great Escape with enough time to make it back to the beach for Blue Hawaii and a spin around the block for Blue Lagoon and Paradise. 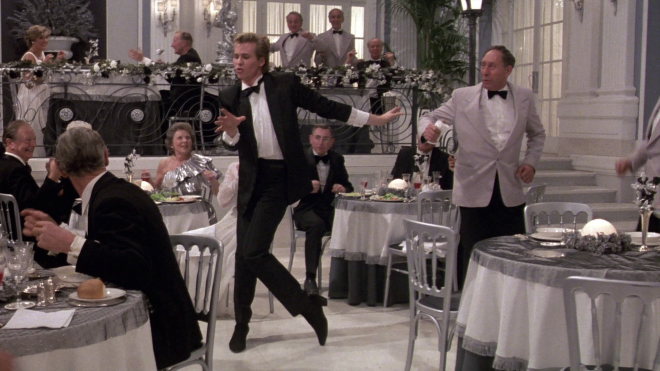 Now, I think that setup is damned funny, but for some reason, this one just doesn’t stick with some folks. Perhaps the stupidest complaint I’ve heard is that Top Secret! isn’t as good as Airplane!. While that may be true to some degree, I think this movie slips on a dance belt and brisés to its own ballet delivering some of the funniest scenes ever committed to celluloid. If all you’re looking for is more Airplane! there’s Airplane II: The Sequel. I'd rather kick back and laugh at what this film delivers than whine about what it doesn't, but that's just me.

“I’ve got a gunrack in my Chevy for when the surf and flack get heavy!”

Leading the cause for freedom in Cold War communist Germany is Val Kilmer in his screen debut. And it’s a hell of a first appearance. With pitch-perfect musical physical comedy timing, Kilmer proved early in his career he was a force to be reckoned with. Lucy Gutteridge plays well into the lady of mystery ensnaring our hero into a higher cause than his music. Jeremy Kemp (Picard’s brother) leans into WWII films as the evil Nazi/East German Communist-inspired villain. He’s not cracking the jokes but he plays well with some of the best sight gags. On top of these great performers, you have Michael Gough, Omar Sharif, Ian McNeice, Peter Cushing, Christopher Villers, and Jim Carter delivering their own deadpan performances. 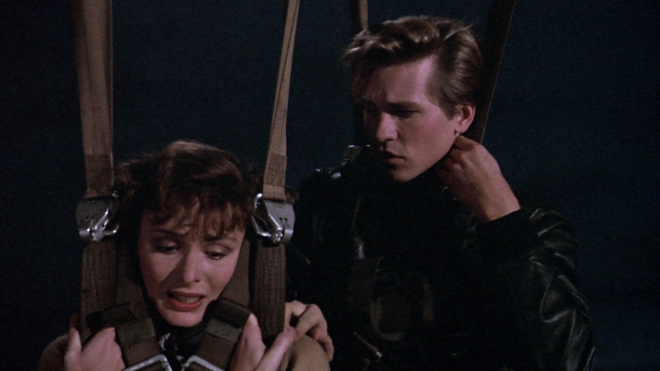 Now I’ll admit nostalgia hits hard for this one as I’ve watched it since I was a child. My uncle had the soundtrack and would run Kilmer’s “Skeet Shooting” and his version of “Tutti Frutti” over and over again. Removing nostalgia from the equation, I think it’s a damn hilarious comedy. Scattershot as it may be, it hits far more targets than it misses. From cows climbing through binocular cutouts to oversized phones to the East German Women’s Swim Team, I’m usually in pain from laughing so hard at all of the sight gags and one-liners and the genuine ridiculousness of the whole affair. 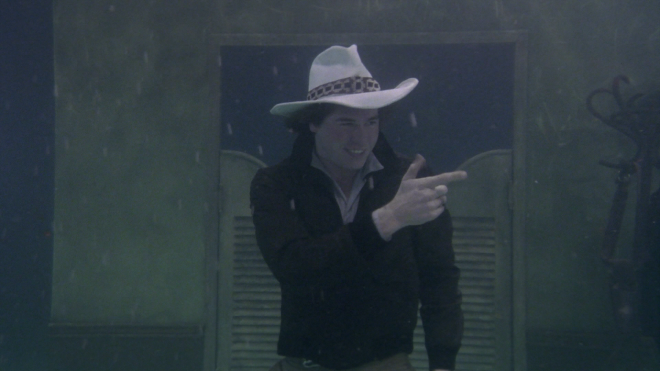 Vital Disc Stats: The Blu-ray
Top Secret! finally breaks into Blu-ray from Paramount Home Video in a single disc Blu-ray + Digital set. Pressed on a BD-25 disc, the disc is housed in a standard case and loads to a static image main menu with basic navigation options. 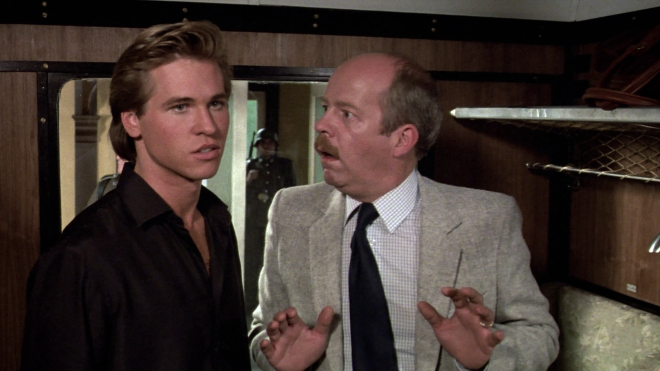 For all of those folks out there waiting for a reason to upgrade their old DVDs of Top Secret!, don’t recycle those discs just yet, you’re honestly better off keeping that disc. This 1080p transfer is a mess and all over the place from start to finish. From scene to scene it can look pretty damn good and a welcome upgrade, to the absolute pits. It has the look of an old HD master, probably the same one used for the DVD, that has been tinkered and fiddled with to death. For any given sequence you have smoothing, grain manipulation, edge enhancement, compression artifacts, macroblocking, crushed blacks, blooming whites, washed-out colors - you name it. To be fair there are quite a few moments where this does look pretty good and could have at least been a middling return for a deep catalog Blu-ray title, but as a whole, this is a misfire mess of a transfer. 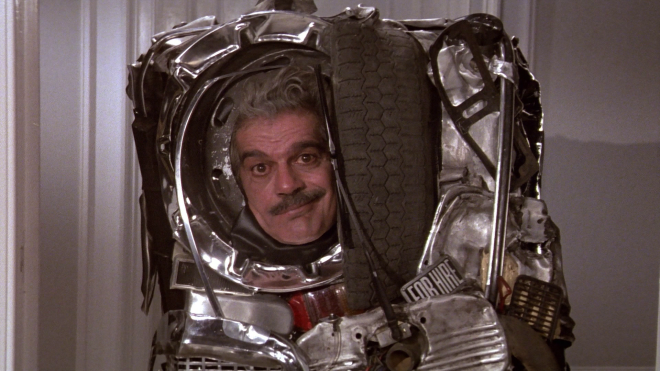 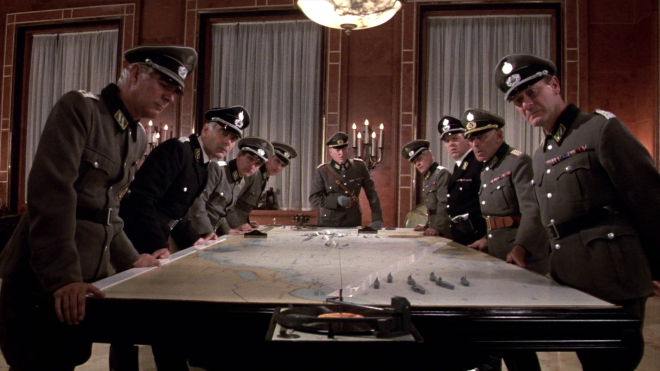 Not fairing any better is this DTS-HD MA 5.1 track. Why it’s even a 5.1 track is beyond me; the mix almost never leaves the front/center channels and when it does it’s for odd spikes in sound effects or music cues that never lasts for long or has any logical reason for that particular effect or sound to appear in that specific channel. Dialog is at least clean and clear and Kilmer’s numerous songs come through without issue. So I’ll give it marks for that, but this isn’t much of anything to write home about. 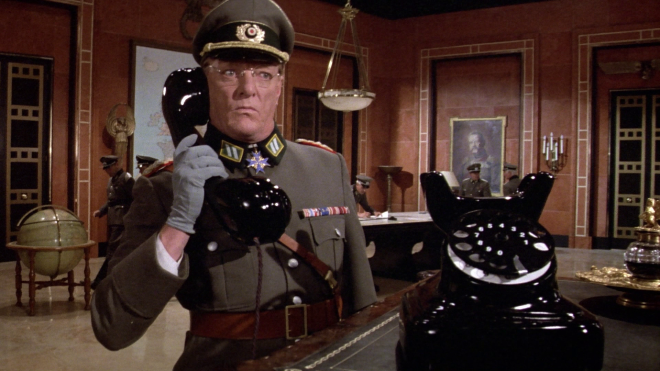 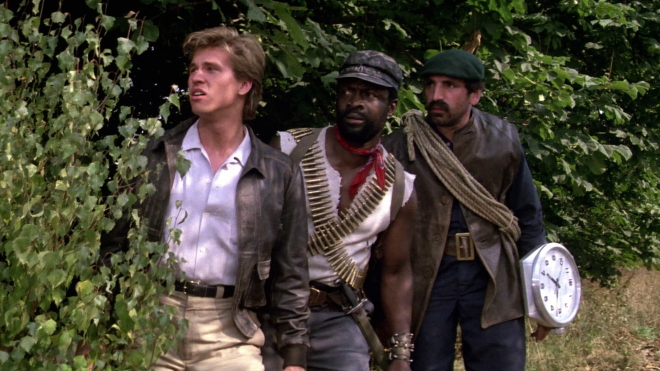 As for bonus materials, what we have is a collection of extras that are ported right over from the DVD. You get the same audio commentary, deleted bits, the Bookstore Backwards sequence, and theatrical trailer. 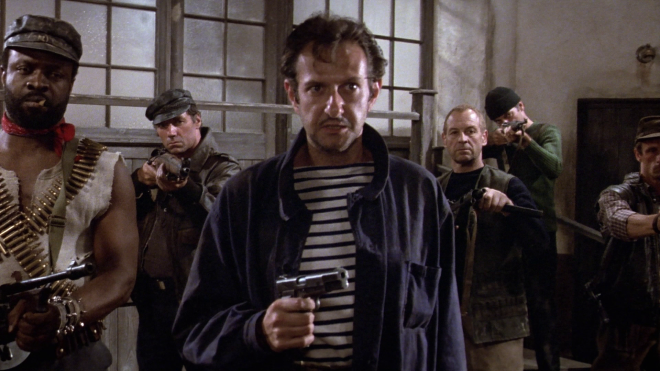 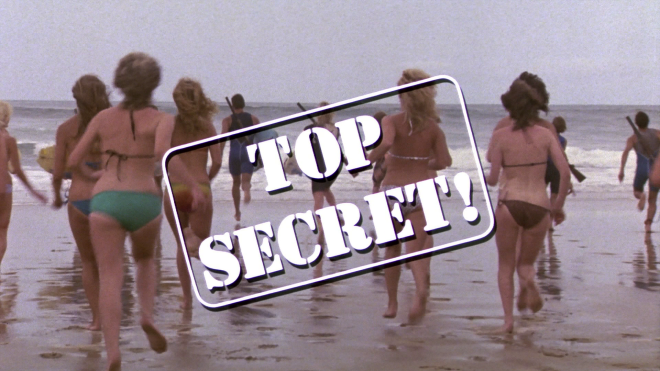 For this writer, Top Secret! is hands down one of the funniest movies ever made. It doesn’t matter where it is in the film, if it’s on TV I’ll watch it through to the end just to read the goofy credits. If I’ve had a bad week, this is a guaranteed laugh and a smile - and after this week I needed it. Val Kilmer makes an amazing debut performance as the hilarious song and dance man of action. Top Secret! is a laugh a second. Sadly, this amazing comedy hasn’t faired as well as Abrahams and Zuckers’ Airplane! on Blu-ray. This is an unfortunately genuinely bad A/V presentation. The video transfer has all the hallmarks you don’t want to see from a catalog release topped off with a bland sound mix. The bonus features are fine - the audio commentary is a hoot if you’ve never heard it - but they’re nothing new. This classic comedy deserves better. It’s Worth A Look if you need the film in your collection but if you already have the DVD you’re all set for now.