The Ghost and the Darkness

Val Kilmer finds himself at a bloody crossroads squaring down two of the most lethal killers of all time - The Ghost and the Darkness. Directed by Stephen Hopkins and co-starring Michael Douglas, this creepy action-packed fictionalized version of real events wasn’t a hit with critics or at the box office but has steadily grown a dedicated cult following. Finally, Shout Factory brings The Ghost and the Darkness to Blu-ray in the U.S. sporting an often beautiful transfer, an eerie effective audio mix, but nothing of any real extras. For fans of this killer beast flick, the wait is finally over. Recommended

England is in the race of an era and to the victor go the spoils. The prize is the continent of Africa. In order to secure its colonial holdings, it needs to lay and secure a massive railroad infrastructure. Colonel John Patterson (Val Kilmer) has been tasked with building a bridge across the river at Tsavo as the railroad extends into the horizon. Only this seemingly simple task is upended when a pair of man-eating lions begin feasting on the workers. After failing to kill the beasts, world-famous hunter Remington (Michael Douglas) is hired to stalk and slay the creatures. Only these aren’t normal lions, they are The Ghost and The Darkness.

To say that The Ghost and the Darkness has a passing resemblance to another man-vs-nature horror adventure Jaws is an understatement. Conceived and written by legendary screenwriter William Goldman, the film is essentially Jaws on land. Trade a shark with two lions, a beach community with a railroad crew, a police chief with an engineer, a crazy WWII veteran with a crazy Civil War veteran, and you essentially have the same film. The only real difference is unlike Jaws, The Ghost and the Darkness is based on real events. 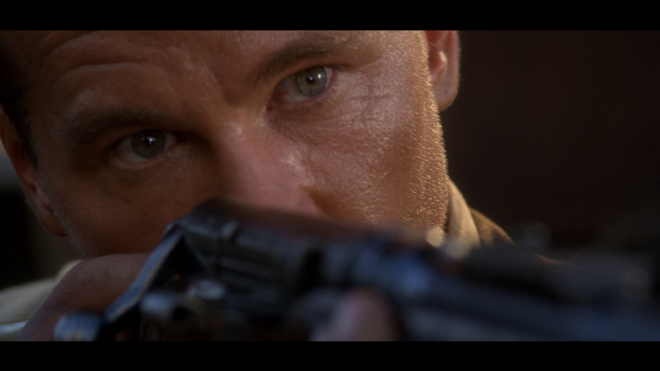 One part African adventure film, one part natural horror film, Stephen Hopkins keeps the film moving and grounded without letting the film get too serious nor does he let it become a bloody gore show. He may have largely dismissed it once it was finished but I feel it’s a strong effort from the filmmaker. Much like his Predator 2, I think this is a better movie than its box office and critical reception would have you believe. Val Kilmer may struggle a little with his Irish brogue but he was in his prime fresh off his time as Batman. He commands the screen and is in damn near every scene of the film. Michael Douglas’ version of Quint is commendable and dedicated, but he often chews the scenery when there’s not a lot of celluloid on the table. John Kani turns in a fine performance as Samuel, but he’s often left to fill the exposition gaps and narrate. He may not have a lot to do, but Tom Wilkinson delivers a fun English aristocrat you love to hate. Brian McCardie, Bernard “For Rohan!!!” Hill, Om Puri, and a very young Emily Mortimer make fine appearances as well. 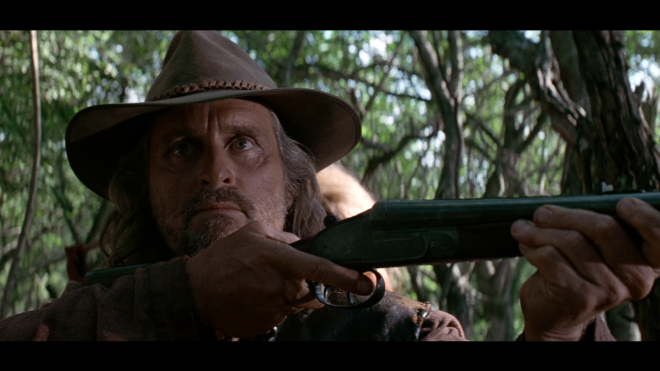 Now, obviously, the film is heavily fictionalized ranging from adding completely fictitious characters to the types of lions involved in the attacks, and even exaggerating the death toll of the lions, but at its core, it’s a true account, and it's damn terrifying! There’s been a lot of historical debate about the veracity of Patterson’s accounting for the number of workers killed (some say only 25-30 while others claim well over 100), regardless that’s a chilling number. The first time I went to the Field Museum in Chicago, one of the first stops I made was to see the reconstructed remains of the Tsavo lions. I had just seen this movie for the first time so it was fresh. I was surprised to learn they were maneless male lions unlike the big cats featured in the movie but even still, the reconstructed display creatures were something. On a funny note - this was my cat Basil Fawlty's favorite movie. Years ago when he was still with us I would regularly turn on my Laserdisc of this movie for background noise while I worked, and every time it was on he’d intently watch the lion attacks and then creepily look back at me… it was unsettling, to say the least. 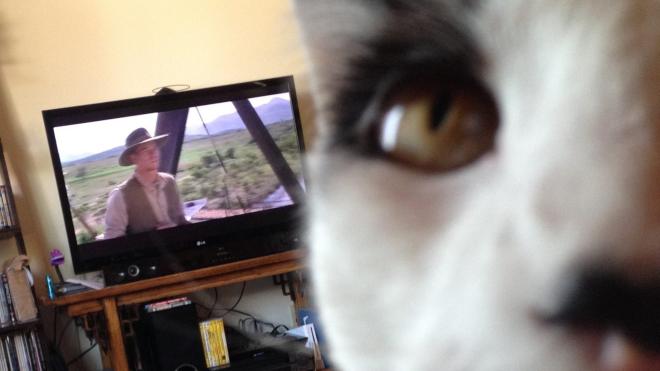 The Ghost and the Darkness certainly isn’t the greatest man-vs-nature movie ever made, but I still contest it’s quite good. More often than not I agreed with Roger Ebert’s assessments of any given movie, but in this case, I feel like he missed the train. Maybe he sat on something sticky on the Red Line the day he reviewed it? Who knows, but I think this is a fun flick and was unfairly dismissed upon release. It’s got some great performances from a dedicated cast with Stephen Hopkins holding the show together working from an engaging script by William Goldman all tied together with an incredible Jerry Goldsmith score earning itself an Academy Award for Best Effects, Sound Effects Editing. Action, horror, excitement, terror - what more could you want from a movie?

Vital Disc Stats: The Blu-ray
At long last, The Ghost and the Darkness terrorize Blu-ray in the U.S. thanks to the fine folks over at Shout Factory. This single-disc edition is pressed on a Region A BD-50 disc. The disc is housed in a standard sturdy case with reversible insert artwork. The disc loads to a static image main menu with basic navigation menu bar at the bottom of the screen. 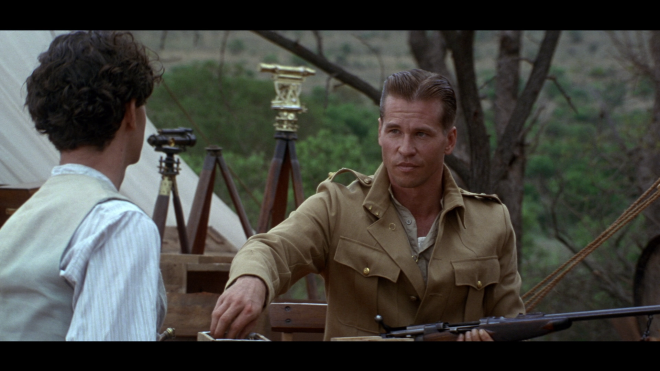 Reportedly sourced from a brand new 4K scan of the original negative, I have to say it’s lovely to see The Ghost and the Darkness looking this good. For years the digital streaming HD master was just utter garbage. I was excited when I scooped it up on VUDU at a cheap price only to be smashed with horrible black crush, disgusting edge enhancement, and blanched colors - I kept my Laserdisc in action specifically because the A/V quality was the best available. Now we have this disc and I can retire that Laserdisc to a frame on my wall.

The first few minutes of The Ghost and the Darkness aren’t a whole lot to look at. They’re dark shadowy hallways with dim lights in some fancy nondescript building. This is where the vastly improved black levels prove so important. We now have clean shadows with appropriate light gradience and avoid all crush troubles. While this opening sequence may not be a lot to look at, you can fully appreciate the details in costuming, facial features, and the production design work employed to recreate Victorian-era England. 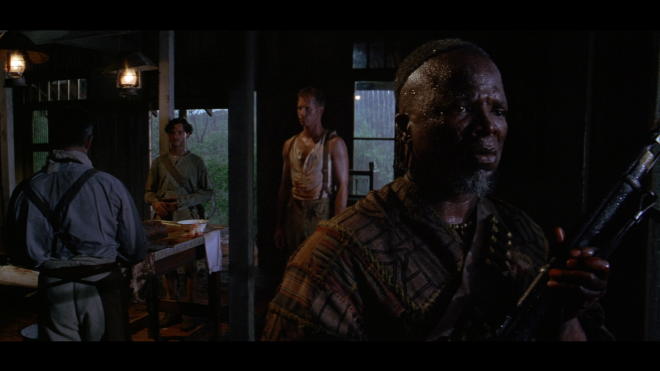 Things only get better once the action moves on location to Africa. Details are damned impressive. I felt like I was seeing little things in costuming and set design I’d never noticed in 20 years of watching this movie. Colors maintain natural healthy hues with beautiful primaries and skin tones. A couple of odd soft shots crop up and some CGI-enhanced areas do stand out - the scene with the lion in the boxcar trap for example - but they’re not distracting or a deal-breaker. Film grain is appreciable without any signs of DNR and maintains a nicely cinematic quality throughout. Of course, I'd love to see this get a native 4K release with HDR - but for now I'll happily keep this disc in my rotation.

Quick note - there is a lot of chatter about what the correct aspect ratio should be for The Ghost and the Darkness. While IMDB lists it as 2.40:1 - they're not always right - and this film has been more or less presented at 2.10:1 for widescreen home video releases since Laserdisc. I don't know if cinematographer Vilmos Zsigmond made that call or Stephen Hopkins or some studio suit, but it's been that way for decades and any number of relevant parties have had ample opportunity to speak up to clarify and to date, I've never seen any comment from anyone actually involved with the production. What can I say it's a mystery. As it stands, this is a damn beauty of a disc even if it might be slightly cropped. 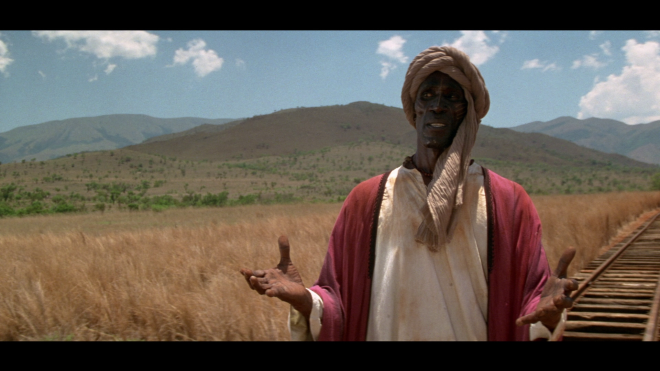 Fans get two audio options to choose from - a DTS-HD MA 5.1 track and a DTS-HD MA 2.0 track. Of the pair, the 5.1 is the stronger more immersive experience. The quiet conversational spells in the film may not call for a lot of surround activity, but there’s enough to keep the channels moving - even if the sound effect is just wind blowing through reeds of grass, it’s enough. Dialog is clean and clear without issue. Jerry Goldsmith’s excellent action-packed score has real punch and adds real tension to key sequences. There’s a good reason this film won Best Effects, Sound Effects Editing. The DTS-HD MA 2.0 track is fine, in all honesty, I only sampled it from my office setup and it works well enough, but it’s really for folks who don’t have a quality soundbar, a full 5.1 or Atmos/DTS:X-ready setup and only use their television speakers. It’ll get the job done but it doesn’t exactly grab you by the guts. 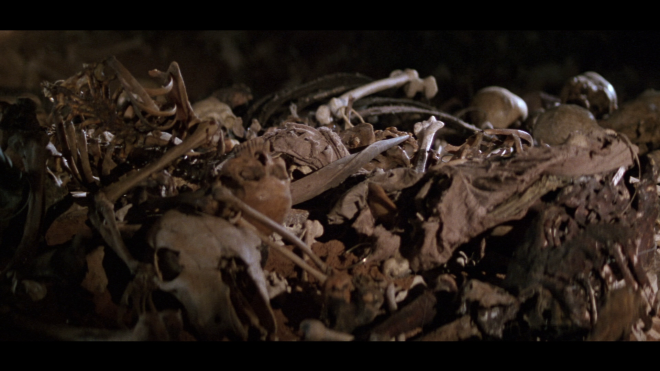 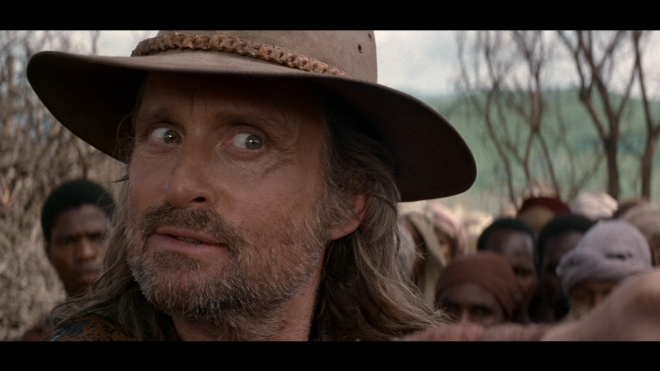 Sadly, there isn't anything beyond the original trailer. Considering Paramount’s lack of support for this title since it was released 26 years ago isn’t too surprising, but some interviews or some archival making-of EPK features would have been nice. 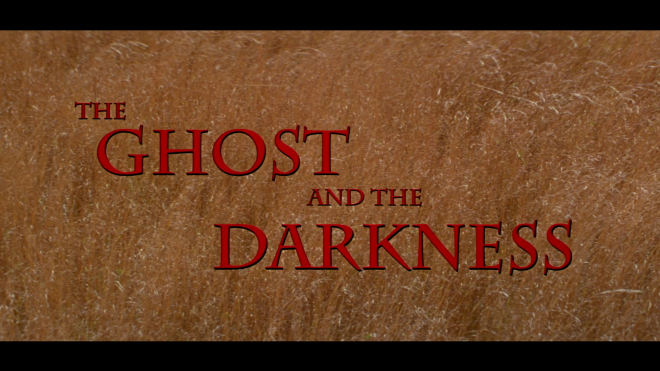 Call me an old softie I guess, because I have a big spot for The Ghost and the Darkness. I’ll admit it’s not the greatest of movies ever made, but I enjoyed the hell out of it in theaters when I was a kid and it sent me down a rabbit hole of trying to learn more about the lions of Tsavo in an era when the internet wasn’t nearly as useful a tool for that kind of research. I found some weird stuff back in the day. The true story is fascinating and terrifying and I feel this film did a good job of capturing that raw creepiness. Plus lions in general freak me the hell out so that helps too. Shout Factory brings The Ghost and the Darkness to Blu-ray for the first time in the U.S. with a pleasing A/V package. I haven’t seen this film looking and sounding this good since the theater so it’s a real treat to finally have this on Blu-ray. Sadly bonus features aren’t anything to report on, but just for the sake of having this film looking and sounding great in 1080p, I’m not going to complain. Recommended.