A scientist genetically alters a colony of super rats, and as they breed and multiply, they must seek ever increasing amounts of food. They soon find a new source of nourishment - human flesh.

Demonstrating just how out of touch the filmmakers are with the youth of the early 80s, one scene shows a group of teenage friends hanging out at a friend's house while her parents are away for the weekend. A pair of girls lounge on the couch drinking Pabst Blue Ribbon and discuss the virtues of dating older men. At the same time, the only boy in the room is seen running around and rocking out to some horrible nameless soft rock, imagining a sweeper vacuum is his guitar. All the while, the first record of the Sex Pistols sits untouched next to the record player. The kid is jumping and banging his head to nonsense when he could be thrashing the whole house while "Anarchy in the U.K." or "God Save the Queen" plays loudly in the background.

Granted, the producers probably couldn't secure the rights to use the music, which is fine, and on the surface of it, seems like foolish nitpicking on my part. But the point is that this one sequence, which goes on for several minutes and is supposed to be an important turning point in the story, nicely sums up the problem with 'Deadly Eyes' (aka, 'Night Eyes'). In a plot about giant black rats created from eating contaminated grain, the narrative busies itself with other less important issues while the production distracts audiences with many small, negligible happenings in the background. If it's not a Sex Pistols album positioned perfectly so that we can see it, then it's the city mayor irrelevantly commenting on his political career or a completely pointless sex scene that serves no purpose other than to show nudity.

Very loosely based on the horror novel The Rats by James Herbert, the story follows recently divorced high school teacher Paul Harris (Sam Groom) trying to situate his life back in order when suddenly confronted by an infestation of overgrown rodents wreaking havoc in his neighborhood. A decently convincing Groom plays the frustrated teacher with just enough weight and seriousness to maintain interest, and his chance meeting with a health inspector Elly (an average Sara Botsford) adds a romantic interest. Their having to work together and find romance amid the chaos makes the characters more likeable, but the subplot of teenager Trudy's (Lisa Langlois) school-girl crush bordering on the creepy stalker is ridiculously unnecessary nuisance that encumbers the action and pace. 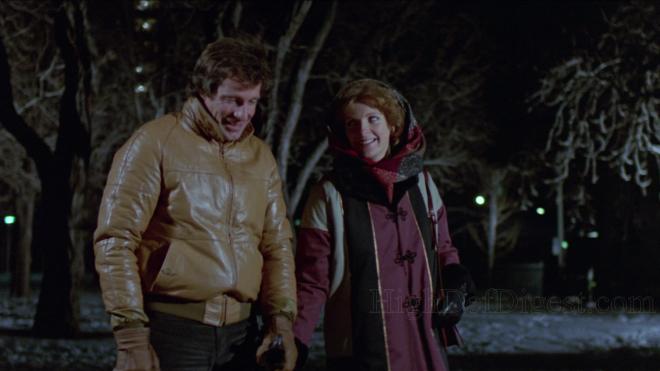 Sadly, the distractions don't end there with the worst culprit coming from the film's main attraction: the steroid-induced rats. Meant to be frightful and more scary ugly than nightmarish, the dog-sized rodents are creepier and more effective when puppets. It's apparent what they are and how the filmmakers accomplish those specific scenes when the little monsters make an appearance, but there's something at least amusing about watching such quaint, old-fashioned practical effects. What suddenly pulls audiences out of the moment are the wider shot of the rodent hordes. It's hilariously obvious, the creatures are a pack of cute dachshunds wearing what looks like very uncomfortably heavy costumes. Well, perhaps these moments are more to the film's advantage than detriment because they provide plenty of unintentional humor.

Nevertheless, the failure in 'Deadly Eyes' comes down to a story that wants to do more than what it is capable of. Despite finally focusing on the plot's initial intent by the end, the subplots and other things popping up in the background tend to distract our attention from an otherwise potentially fun B-horror flick in the vein of 'Them!' and 'Tarantula.' Director Robert Clouse even takes a moment to remind audiences that he once directed Bruce Lee with a theater sequence that conveniently happens to be showing Clouse's 'Enter the Dragon.' But again, this only distracts rather than adds, taking away the fun of enjoying the cheap production values and the over-the-top silly notion that an infestation of overgrown rats can overwhelm a major city with gnawing teeth hungry for human flesh.

Shout! Factory brings 'Deadly Eyes' to Blu-ray as a two-disc combo pack under the distributor's Scream Factory line. The Region A locked, BD50 disc is housed inside the normal blue case with a second DVD-9 disc on the opposing panel. At startup, the disc goes to a generic main menu selection with full-motion clips and music playing in the background.

The Canadian horror flick infests Blu-ray with a great-looking 1080p/AVC MPEG-4 encode that shows excellent definition and resolution for a 30-plus year old movie. Fine lines and objects are nicely detailed while facial complexions are revealing with healthy flesh tones, exposing every wrinkle and blemish in the cast during close-ups. Presented in its original 1.85:1 aspect ratio, the video comes with very good balance in the contrast and crisp, clean whites throughout. Colors are bold with richly-saturated primaries, giving the transfer a welcomed rejuvenated appeal. Black levels are accurate and deep with appreciable visibility within the darker portions. With a fine layer of grain providing a pleasing film-like charm, the high-def transfer is a much better presentation than initially expected.

The rodent plague continues to ridiculous proportions with an equally good DTS-HD Master Audio mono soundtrack. Despite the presentation being contained in the center, imaging is surprisingly excellent and ample with a great sense of presence and space. Dynamic range is extensive with strong acoustical details and clear distinction in the highs. Background activity is discrete with satisfying off-screen effects, keeping viewers engaged and the action reasonably exciting. The silly growling sounds of the rats are all the sillier by how clear they come in. Vocals are clean and intelligible throughout, and low bass is adequate for a movie of this vintage but lackluster nonetheless.

'Deadly Eyes' is a largely-forgotten horror flick about an overgrown, contaminated rat infestation with the potential to be an unintentionally funny B-feature. Sadly, with a script that preoccupies itself other distracting issues, the end product is just a silly mess with dachshunds dressed as black rats. The Blu-ray arrives with a surprisingly good audio and video presentation and a nice collection of supplements. The overall package should please fans, but others might want to give it a rent first.

Sale Price 85.49
Buy Now
3rd Party 84.87
In Stock.
See what people are saying about this story or others
See Comments in Forum
Previous Next
Pre-Orders
Tomorrow's latest releases