Masterclass low-budget director Greydon Clark’s sci-fi/horror cult classic Without Warning arrives for a second run on Blu-ray thanks to Kino Lorber Studio Classics. This alien invasion film proudly wears its budget on its sleeves pulling off some genuine thrills and chills with solid effects work and a great cast including Jack Palance, Martin Landau, and Cameron Mitchell. With a new transfer, clean audio, and a slew of archival bonus features, if you missed out on the 2014 disc, this is a great pickup. Recommended

These things have been seen for years. They’re here. It’s a fact. They’re not invading the big cities and laying waste to our national monuments with giant lasers from the sky, no, they’re attacking us quietly and undetected in our rural communities. Crazed former army sergeant Fred Dobbs (Martin Landau) has been trying to tell everyone but no one listens. When coed campers Greg (Christopher Nelson) and his girlfriend Sandy (Tara Nutter) head out to the lake with their friends, they’re set upon by flying flesh-eating creatures. But something is controlling these beasts. Something horrible. Local game hunter Joe Taylor (Jack Palance) may be the only man capable of stopping this intergalactic menace.

Folks outside of the Mystery Science Theater 3000 community may not know the name Greydon Clark, but for a subsection of fans, he’s low-budget movie royalty. His films Angels Revenge (also known as Angels Brigade and 7 From Heaven) and Final Justice are probably his most famous flicks for that reason. But give this man a modest budget and he can churn out satisfyingly entertaining features like Black Shampoo, Satan’s Cheerleaders, and the 1980 gem Without Warning.

Playing closer to a slasher film with an alien invasion bent, Without Warning is another of Clark’s low-budget wonders that pushes every penny to the breaking point but still delivers a polished and entertaining show. Shot by legendary cinematographer Dean Cundey and made on a scant budget of $150,000 - the film makes the most of what it has to use. A lot of the weight of the show is carried by two great lead performances from Jack Palance and Martin Landau - their fees alone ate up over half the budget. Using every trick of the book from small practical effects to simply turning out the lights, Clark stitches together a tight, tense, little alien invasion film. 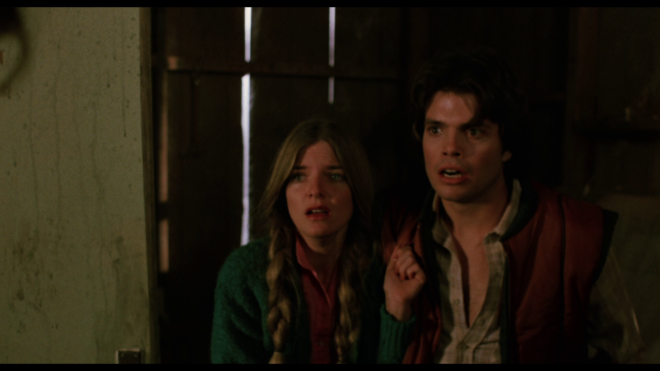 I have a lot of love for movies that don’t hold back and just go for it. Without Warning may be a simply unsurprising film, but it manages to do some good work. Palance and Landau are clearly having a great time chewing the celluloid scenery while the young cast of nobodies and first-timers - including a very young pre-First Blood David Caruso - are giving it everything they’ve got. Cameron Mitchell even drops by for what amounts to a quick cameo but he sells his brand of crazy with vigor. I especially enjoy this film’s practical effects. The flying disc munchers are a nice touch delivering the required blood and guts for this entry while also being a fun callback to b-movie maestro Roger Corman’s 1956 classic It Conquered The World. 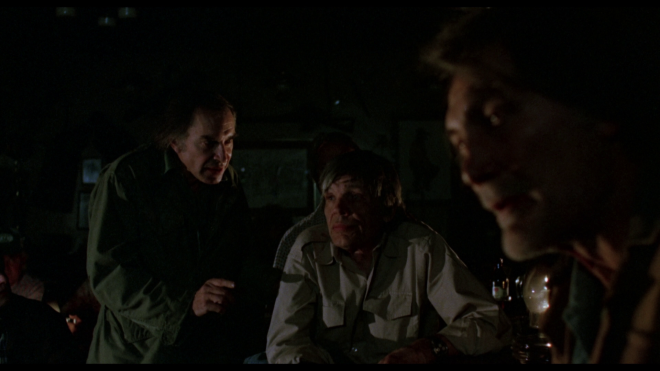 Sure, Without Warning isn’t going to be accused of being the biggest and best of the genre, but for its own subsection of low-budget thrillers, it’s a solid film. One could poke and prod it all day long, but looking for silly defects distracts from what is essentially a well-tailored, smartly executed little sci-fi film. Of his catalog of features, I’d put it as a top-tier effort from Greydon Clark that proves to be a wildly entertaining little show. Palance is always at his usual best as the hunter who knows what’s what. Landau gets to go full conspiracy theory crazy in a way that is far more satisfying than his appearance in The X-Files: Fight the Future. To top it off you have a very young Kevin Peter Hall practicing his Alien Invader chops before he became the famous intergalactic hunter, Predator. Without Warning is just fun, so kick back and enjoy yourself!

Vital Disc Stats: The Blu-ray
Without Warning invades Blu-ray for the second time in a new single-disc release from Kino Lorber Studio Classics. Pressed on a BD-50 disc, the disc is housed in a standard keepcase with an identical slipcover and alternate reversible insert art. The disc loads to a static image main menu with a basic menu navigation system. 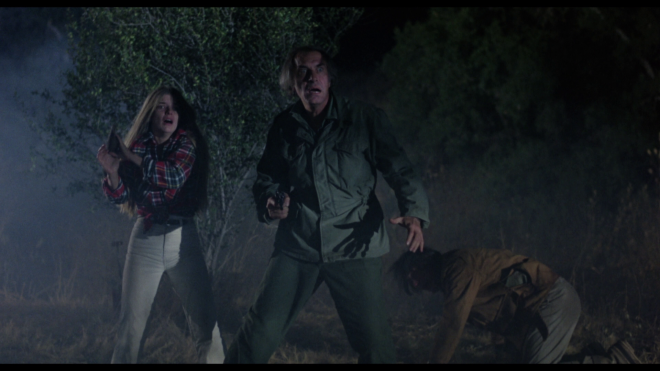 Reportedly sourced from a new 2K master, Without Warning makes for a fine run on Blu-ray. I  missed out on the 2014 Scream Factory disc; it was the title I kept putting off until it was out of print and I wasn’t going to spend eBay prices for this movie. While I don’t have that disc to compare, I’m very happy with the results here. As I mentioned in the main review, this movie had a thin budget to start with and it was squeezed even tighter with the main lead actors eating up most of the budget - so this movie isn’t exactly a “looker.” You can see that Clark and cinematographer Dean Cundey made the best of what they had to work with. 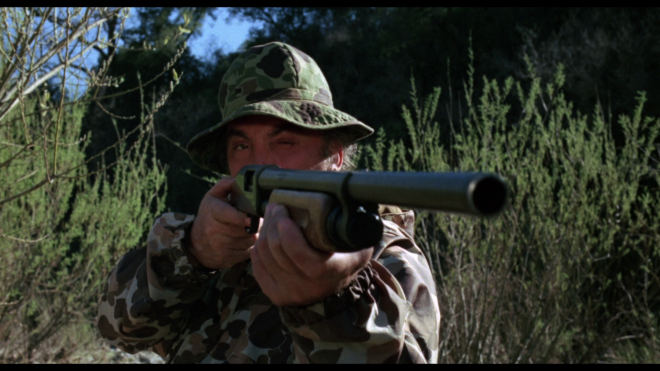 Daylight sequences genuinely look the best since they probably didn’t have to blow cash on expensive lighting rigs. Night and darkly lit scenes are generally fine - the climax in particular or when Greg and Sandy find the shack look great - but there are a few sequences where fine details can get lost in the thick black shadows. Details are solid throughout, again depending on shooting conditions. Film grain can be a bit thick but it as a natural cinematic quality you’d expect from a small budget feature. Colors are on point, the film makes great use of the natural earth tones with nice primaries and healthy skin tones. Black levels are in good shape, some sections are a bit close to crush but nothing serious. Film elements are in good shape with only some slight speckling here and there. All around a nice transfer for this little feature. 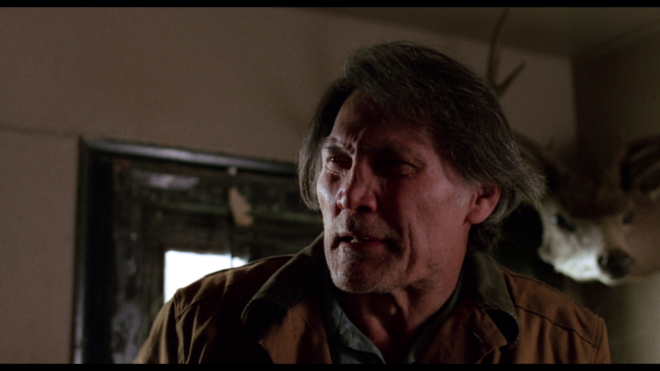 Without Warning also comes in with a nice DTS-HD MA 2.0 track. I haven’t seen anything to suggest otherwise, so I assume it’s the same mix found on the 2014 disc. Dialog is generally clean and clear throughout - although you can tell when the dialog was added in post-production. Sometimes Palance mumbled his lines and his words are a bit soft, but nothing to compensate for. Some of the sound effects like the “munching” effect of the flying critters sound a bit canned and tinny but that’s a little quibble really and in my opinion, actually adds more flavor to the film. Dan Wyman’s score may not get much of a workout but it does give some heft to the tension when called for and comes through without issue from other audio elements in the soundscape. Levels are spot on without the need for compensation and no age-related issues to report. 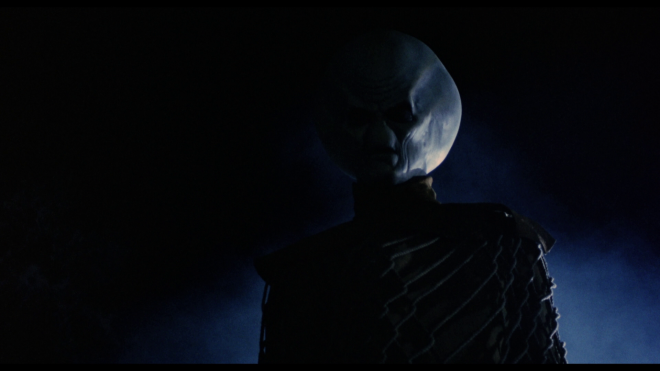 By and large, Kino Lorber Studio Classics ported over everything from the Scream Factory disc, including the commentary track from Clark. If you haven’t heard it, his commentary may be a bit dry and he sounds like he’s reading from prepared notes instead of doing a scene-specific track, but it’s very informative and he details a lot of tricks he employed throughout his career to stretch his budgets as far as they could go. The only new item on the list is a Trailers from Hell segment and Kino’s standard gallery of related trailers. 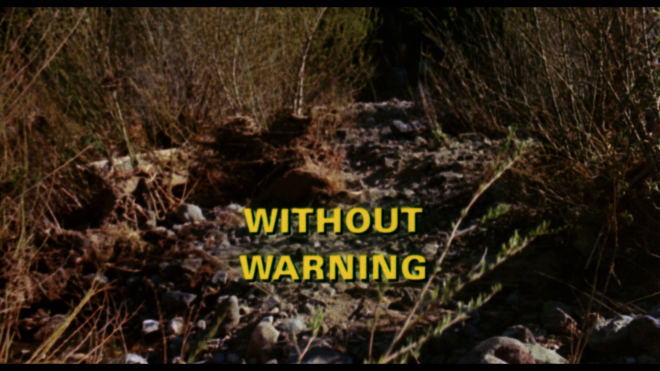 Without Warning is B-movie sci-fi magic at its finest. Shot on a slim budget it makes the most of what it has to work with thanks to some great performances from Martin Landau and Jack Palance with some slick monster and creature effects, and the efficient style of director Greydon Clark. Thanks to Kino Lorber Studio Classics, this cult favorite gets a second run on Blu-ray with a slick new transfer, a clean audio mix, and a nice package of archival bonus features. If you missed out on the previous release or just love low-budget sci-fi, don’t let Without Warning pass you by. Recommended.