Overview - A mini-series that traces CIA activities over a 40-year period, from the beginning of the Cold War through the demise of the Soviet Union.
OVERALL
Worth a Look

'The Company' is based on a 2002 New York Times bestselling novel by author Robert Littell that details the evolution of the CIA during the Cold War. Hailed by critics and praised by readers, the book caught the attention of executives at the TNT Network, who quickly nabbed the rights and fast-tracked a miniseries for production. The result is a sprawling four and a half hour epic that explores the thirty year, cat-and-mouse intelligence battle that was secretly waged from World War II through the end of the Cold War.

The story begins with an introduction to a group of naive college seniors -- Jack McCauliffe (Chris O'Donnell), Leo Kritzky (Alessandro Nivola), and Yevgeny Tsipin (Rory Cochrane). Jack and Leo are scooped up by the CIA and promised the opportunity to keep the United States safe from communism. On the other end of the world, Yevgeny returns to his native Russia and is recruited by the KGB to run counterintelligence operations in America. His mission is to relay messages to double agents including a deep cover mole codenamed "Sasha." As the story picks up steam, Leo gets a desk job in Washington working for a specialist named James Angleton (Michael Keaton) and Jack is sent to Europe to train under a weathered spy named Harvey Torriti (Alfred Molina).

As the decades pass, Jack and Leo learn of the existence of "Sasha" and begin to work tirelessly to uncover his identity. Angleton grows increasingly paranoid as their search hits a road block at every turn, but the agents press on. As field missions overseas (including the Bay of Pigs Invasion) continue to fall apart, Jack and his compatriots have no choice but to succeed in flushing out the KGB's mole.

Although it received mixed critical reaction during its initial cablecast this past August, I found myself enjoying 'The Company' more than most. The supporting performances are good, the overall story is intriguing, and the cinematography is beautiful (especially for a TV miniseries). O'Donnell's performance may fall flat at times, but Molina and Keaton are the real attractions, amd they steal the show every time they appear. The rest of the cast is fairly strong as well and the script doesn't fall prey to overindulgent sermonizing about our current political climate. More importantly, the dialogue is consistently sharp and the unfolding historical conflicts are fascinating to say the least.

So what's the problem? Sadly, the pacing is all over the place. I've never read Littell's original novel, but I can only imagine the critically acclaimed bestseller doesn't suffer from the same issue. Television director Mikael Salomon and screenwriter Ken Nolan spend too much time exploring the numerous love interests of the main characters, giving short shrift to the story's more interesting historical battles and operations.

I also have an inherent problem with this particular type of historical fiction. I often found myself distracted with questions about the legitimacy of the "facts" presented in the story -- it's tough to enjoy a history lesson when it's unclear whether a particular scene is contrived or based on actual events. Normally, adaptations in this vein simplify the order or progression of events or, at the very worst, combine several real people into one character. In this case, entire events, battles, and perspectives have been drastically altered to suit the needs of the story's meandering subplots. When the facts of a major intelligence operation are bastardized to benefit a minor love story, the creators clearly have skewed priorities.

'The Company' is an interesting examination of key moments in the dangerous evolution of the Cold War. Taken as pure fiction, the miniseries is an enjoyable enough jaunt. Taken as a document of history, it's a frustrating mess that can't establish a consistent rhythm. I had a good time watching 'The Company,' but I had to ignore too many distracting issues to declare this one a winner. 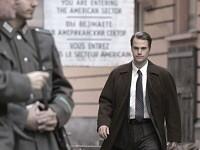 'The Company' is presented with a strong 1080p/AVC MPEG-4 transfer that looks amazing for a TV miniseries.

The show's stylized palette is intentionally bleached, but the drab colors are stable and clean. When bold colors or scenes do make an appearance, they're nicely saturated and don't feel out of place. Black levels are deep, contrast is comfortable, and shadow delineation reveals every element of the set dressers' care. Detail is also stunning -- clothing texture pops, hair and skin look crisp, and the smallest speckles of mud and blood are clearly rendered. In fact, this high definition presentation is so detailed that it exposes the seams in the makeup used to age O'Donnell, Keaton, and the other actors during the last hour of the miniseries.

Alas, all is not perfect. I spotted some slight color banding around bright areas of the screen in a handful of shots, there are some instances of shimmering (most noticeable on a few tightly textured suit coats), and a half dozen pickup shots feel softer than the rest of the presentation. That being said, these are relatively minor issues that hardly make a dent in the overall experience. This Blu-ray transfer looks much better than the series did its run on TNT HD, and it's sure please fans of the show. 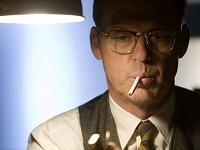 The Blu-ray debut of 'The Company' continues to impress with an uncompressed PCM 5.1 surround track (48 kHz/16-Bit/4.6 Mbps) and a standard Dolby Digital 5.1 mix (640 kbps). The PCM track shows its prowess during booming wartime scenes, but the Dolby Digital mix is no slouch, wither -- since this largely a conversation-driven miniseries, both audio options handle the job well.

Dialogue is crisp and is rarely lost beneath the aggressive dynamics of the last half of the miniseries. Gunfire and explosions are reproduced with a satisfying, organic rumble, and I was particularly impressed with the soundfield integrity. Directionality is eerily perfect and the soundscape is convincing no matter how many whizzing bullets are packed into a scene. Closing my eyes and listening to the environmental sounds, I was able to identify even the most minute details, including dirt crunching below boots, ricochets registering in the distance, and debris sprinkling down after tank blasts.

The only problem I had with both tracks involved soundscape acoustics. I may just be spoiled by big-budget Hollywood productions, but rooms of varying sizes all sounded the same in 'The Company.' The only significant differences came when the focus shifted from an indoor scene to an outdoor scene (or a grand hall). It desn't help that voices in the first act are occasionally lost as a result -- I had to backtrack three or four times to catch a line of whispered dialogue, and at one point I even had to throw the subtitles up to figure it out.

Still, again, overall this is a most impressive soundtrack. 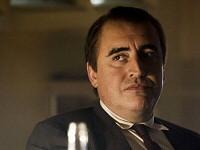 Although this Blu-ray edition is missing the "Covert Mission: DVD-ROM" content from the concurrently-released standard DVD, it retains all of the other main features. Overall, the extras are slim and I personally would have found this package far more interesting if it had included a thorough examination of the history vs. this fictional account.

What we do get are two featurettes, both of which can be found on disc 2: "Declassified: The Origins of The Company" (15 minutes) and "The Hidden Hand: The Making of The Company" (23 minutes). "Declassified" features various members of the cast and crew discussing the script, the characters and the story. "The Hidden Hand" hones in on the crew to explore the behind-the-scenes story that brought 'The Company' to the small screen. Both are fairly dry and only touch the surface of the amount of work that must have gone into a miniseries of this scope.

(Note that both featurettes are presented in 480i/p video only.) 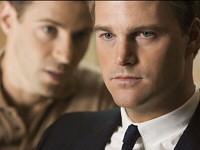 'The Company' may be a flawed piece of historical fiction, but it still manages to bring some strong performances and an interesting story to the table. This Blu-ray release easily trumps the original TNT HD cablecast, boasting very strong video and audio. The only real disappointment is a thin set of supplements that fail to add context or resonance to the proceedings. Still, especially for a television miniseries, this an impressively solid release.