Based on an incredible true story of one man's fight for survival and freedom. In the pre-Civil War United States, Solomon Northup, a free black man from upstate New York, is abducted and sold into slavery. Facing cruelty, as well as unexpected kindnesses, Solomon struggles not only to stay alive, but to retain his dignity. In the twelfth year of his unforgettable odyssey, Solomon's chance meeting with a Canadian abolitionist will forever alter his life.

For whatever reason – just coincidence most likely – there were a number of notable films in 2013 that dealt with the topic of racism. First and foremost among these was Director/Producer Steve McQueen's '12 Years a Slave', which just recently claimed the Academy Award for Best Picture. While I like McQueen's movie and think it's worth a look, I neither think that it was the Best Picture of 2013 nor even the best film from last year tackling racism (I'd still give that honor to the incredibly underappreciated 42). There's no doubt the that story of Solomon Northup is an important one to tell, it's the method of the telling that I had some problems with.

The movie stars Chiwetel Ejiofor as Solomon, and let me start by saying that none of the issues I have with '12 Years a Slave' have anything to do with his performance. In fact, he's the only reason the first 45 or so minutes of the movie have any strength at all. Northup is sold into slavery after being tricked by a pair of Northerners asking if he'll come to Washington, D.C. with them to be part of an entertainment production they've put together (Solomon is quite adept at playing the fiddle). This turns out to be a smokescreen however, and – after drugging Solomon during dinner – he wakes up to find himself chained and sold to a pair of 'slavers'. From there, he's more or less passed around from one owner to the next until he winds up in the hands of William Ford (Benedict Cumberbatch), who actually treats his slaves quite well – or at least as well as someone who believed human beings could be owned as property could at that time.

At this point in the film, things start getting much better in terms of storytelling, but that first stretch of the film is a real chore to sit though. It's not because it's historically accurate – by all accounts I have read, this is a pretty faithful adaptation of Northrup's story (which was published in a 1853 memoir). The problem here – and it's one I lay at the feet of director McQueen and screenwriter John Ridley – is that there are no (or very few at least) moments that allow the viewer to become emotionally attached to Solomon as a character. His family appears only in a few moments of screentime, and because the character is jumping from one place to the next so quickly, he has very little chance to interact long with other characters, which means the viewer has very little chance to find out more about Solomon as a man.

As uneven as the first half of '12 Years a Slave' is, the second half is a powerhouse of emotion and – most probably – what led to the buzz about this movie that resulted in the Academy Award. It all starts with Solomon getting into an argument with a hired hand of Ford's that leads to Solomon being hanged from a tree as punishment. Ford's not on the plantation during the time, and Northrup is left to suffer all day long – and McQueen makes us really feel that moment, as the camera just lingers on him for an uncomfortable length until Ford finally returns to the plantation and cuts him down.

Solomon gets sold to Edwin Epps (Michael Fassbender), a harsh and sadistic plantation owner who is the complete opposite of Ford in terms of kindness. Epps has feelings for one of his slaves, Patsey (Oscar winner Lupita Nyong'o), but his inner conflict about caring for what he believes is nothing more than property leads to incredible acts of violence against her. There's a scene late in the movie in which punishment is doled out to Patsey and Epps forces Solomon to do it that is gut-wrenching and heartbreaking. It's the one scene in the film viewers will want to avert their eyes from, but at the same time it's also the best moment in the film.

The question here becomes can you call a movie 'great' if a big chunk of it is rather mediocre, or at the least not very engaging? I don't think so, and for that reason, I don't think '12 Years a Slave' is quite deserving of all the lavish praise it has gotten. That said, the second half of this movie finally delivers a tale worthy of its subject matter. Taken as a whole, this is a 'good' but not quite 'great' movie, yet nevertheless one worthy of a look, should you not have had the chance to see it yet. However, see this one for the performances, not necessarily for a perfectly mapped-out presentation.

'12 Years a Slave' arrives on Blu-ray in an eco-friendly keepcase with a slipcover that matches the artwork of the slick. The case contains the 50GB dual-layer disc, along with an insert with a code for an UltraViolet digital copy of the movie. The Blu-ray is front-loaded with trailers for 'The Grand Budapest Hotel', The Book Thief, The Counselor, and Mandela: Long Walk to Freedom. The main menu consists of a montage of footage from the movie, with menu selections running along the bottom of the screen. 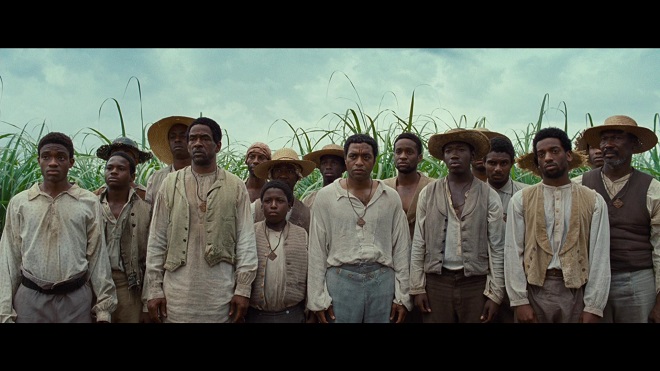 '12 Years a Slave' was shot on 35mm film using Arricam cameras, and the transfer to Blu-ray is quite pleasing to the eye. Shot entirely in Louisiana and making use of some of the remaining plantation houses in that area, the film is full of lush imagery that proves to be an ironic counterpoint to the harsh punishments that the characters in the movie must suffer.

While the movie was shot on film, grain has nicely been pushed into the background, although it is more obvious in some of the darker scenes of the movie of which there are many. Black levels aren't as strong as I would have hoped, making many of those darker scenes hard to make out on home video. The scenes shot during the daytime, however, are just bursting with color and really look great.

Contrast is well-balanced throughout, with consistent skin tones. Detail level is very sharp, with the exception of a few of those darker scenes mentioned above. There's not a hint of any issues with artifacting, banding, or other frequently seen problems.

The primary track here is a 5.1 English DTS-HD Master Audio one that more than serves its purpose. While there's not necessarily a whole lot going on in terms of directionality, the track does use the rear speakers to provide viewers a nice sense of immersiveness – giving them the feeling that they are right there on the plantation with Solomon with ambient sounds of insects, birds, horses, etc.

Dialogue is crisp and clear throughout, with no noticeable issues or glitches. Everything is properly balanced as well, so neither Hans Zimmer's score nor background noises ever drown out the spoken word. In addition to the lossless English 5.1 track, this disc also contains 5.1 Dolby Digital tracks in both Spanish and French, as well as 5.1 English Descriptive Audio.

Subtitles are offered in English SDH and Spanish. 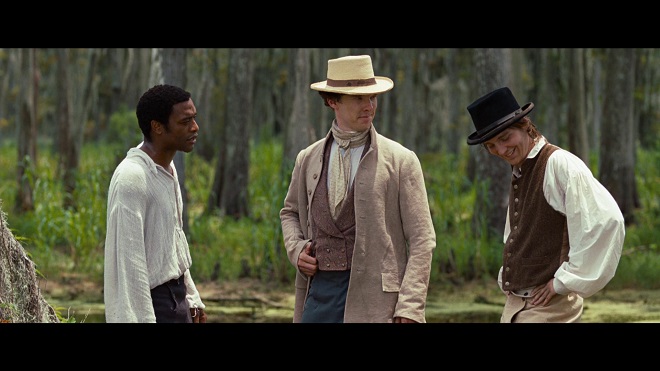 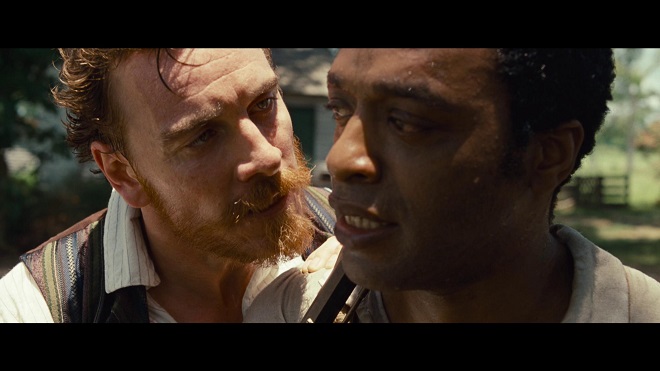 Although I'm not sure that '12 Years a Slave' is really deserving of its Best Picture honor, I won't deny that it's a well-made and occasionally (although not as often as I hoped) moving examination of the horrors of slavery. The problem here is the first-half of the movie, which is not as engaging as everything that follows later in the film. The real draw here is the incredible performance by Chiwetel Ejiofor, who brings a humanity and dignity to his role that is the cornerstone of the movie. Since I do have some reservations with the movie taken as a whole, it might be a good idea to rent before making a purchasing decision – but it's still good enough overall to get a recommendation from me, thanks largely to a second-half much stronger than the first, and great acting by both Ejiofor and co-star Michael Fassbender.

Sale Price 9.83
Buy Now
3rd Party 5.78
In Stock.
See what people are saying about this story or others
See Comments in Forum
Previous Next
Pre-Orders
Tomorrow's latest releases