This well-packaged, fun slice of B-movie terror is dedicated to the horror tape heads who frolicked about in the video store, searching for some stupid entertainment to watch on a weekend night. Perhaps you even remember seeing a VHS copy of Michael Cooney’s 1997 Jack Frost. I'm not talking about the Michael Keaton family drama that was released one year later. No, it’s the nightmare-inducing, holographic cover where a happy, green-eyed snowman quickly morphs into a sharp-toothed killer snowman.

So, if you remember that cover (or the movie), you know exactly what you’re getting into with this new Blu-ray release of Jack Frost from the MVD Rewind Collection. It’s an incredibly ridiculous but deliciously entertaining and hilarious flick coated in a collector’s shine that will warm your genre-loving soul. Worth A Look!

Jack Frost definitely has that straight-to-video, ‘90s stank on it, but it’s all the more amusing because of it. It’s quite clearly cheaply made. You’ll quickly notice fake snow spread across a warmer, out-of-season setting. (Hey, John Carpenter made Halloween work by planting fake leaves around Haddonfield, a.k.a. Pasadena, Calif.) But director Michael Cooney figuratively covers our ears from noticing the budget’s light pocket jingles by intimately centering the frame and focusing on character reactions instead of the money shots. It’s like watching Larry Cohen (It’s Alive) at work, running and gunning it. 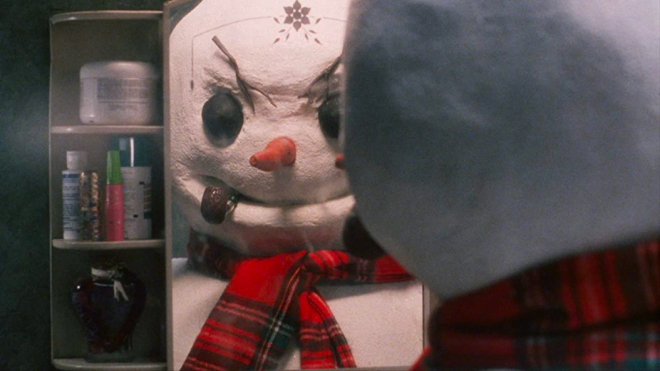 Plotwise, expect something quite similar to the story of the original Child’s Play, but with more of the tongue-in-cheek attitude of the sequels. Like Chucky, good ol’ Jack Frost (Scott MacDonald) was a human before he took the form of something that usually brings about joy. Jack happens to be a prolific psychopathic killer, who, by a stroke of misfortune, finds himself captured by Sam Tyler (a terrific Christopher Allport of To Live and Die in L.A. fame), the sheriff of a rustic area known as (*wink*wink*) Snowmonton County. After Jack is found guilty and sentenced to die, he vows to get revenge by killing the sheriff, his family, and every other poor soul in Snowmonton. This is when fate twists in Jack's favor, but not how he expected.

On a snowy December night, a state execution transfer vehicle carrying Jack collides with a genetic research tanker truck. (You know, that classic accident.) Jack is doused with an acidic solution that painfully dissolves him into the snow. But like some Spider-Man villain, the mysterious chemical alters his DNA to become a snowman?— one that can change from liquid to solid at will. So, if you spot a snowman around town with a crooked smile, and it gives you the heebie-jeebies, go ahead and plan for a dirt nap. 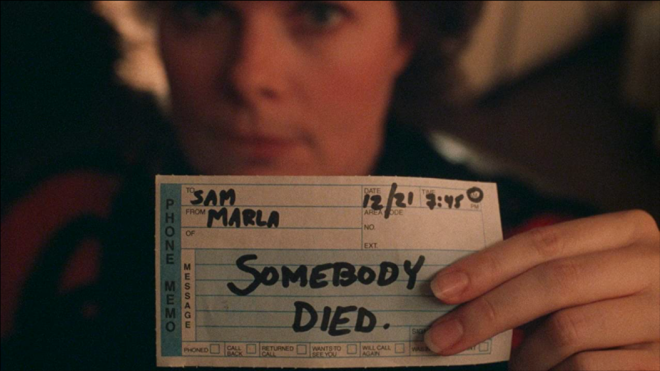 "Looks like Deep Fried Jack's off the menu for tonight, huh?"

Cooney’s film is humorously clever amid all its idiotic shenanigans. It’s got all the eye-rolling you could ever expect from a movie about a killer snowman, but you’ll be tickled by Jack’s Freddy Krueger-like one-liners. Also, look out for a comical sex scene involving two teens (one of whom is played by a young Shannon Elizabeth) undressing. However, it takes them several minutes to get all their layers off because it's so cold outside.

And that’s Jack Frost in a nutshell. It never takes itself too seriously. It knows exactly what it is. It doesn’t dip too far in its lunacy where it becomes too desperate for your laughs. (You know those annoying types?) It’s a solidly built snowman massacre. You just may have to slip a little rum in your eggnog to elevate your enjoyment. 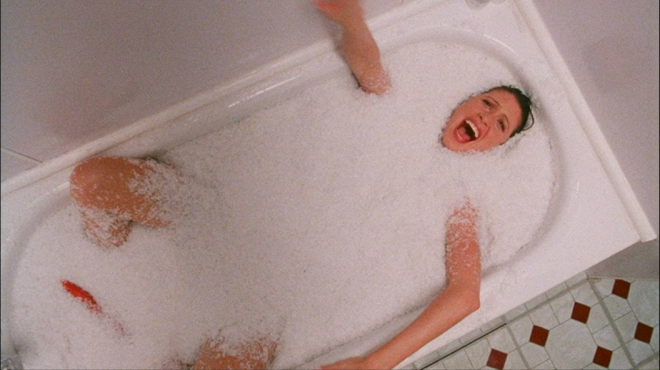 "Looks like Christmas came a little early this year."

Jack Frost creeps its way onto Blu-ray from the MVD Rewind Collection, a release line that features cult movies and forgotten gems. Keeping with the consistency of the other 34 titles in the Rewind Collection, this chillin’-and-killin’ movie is housed inside a hard, plastic case with a cardboard sleeve, resembling the VHS-aesthetic of Media Home Entertainment.
The frame-worthy sleeve artwork is an original design by illustrator Alí Hdz/Brutal Child. It features Jack Frost wielding a bloody knife in a snow-covered backdrop. It also has an animated style that captures the spirit of classic holiday cartoons. And speaking of the art being frame-worthy, inside the Blu-ray case is a folded mini-poster. The Blu-ray case includes reversible artwork, including the new design (like the sleeve) and the more standard artwork (a simple image of a smiling Jack Frost in red and blue tones). Unfortunately, no digital code or DVD is included. But you’ll discover a nice nostalgic touch of the disc itself looking like a VHS tape. 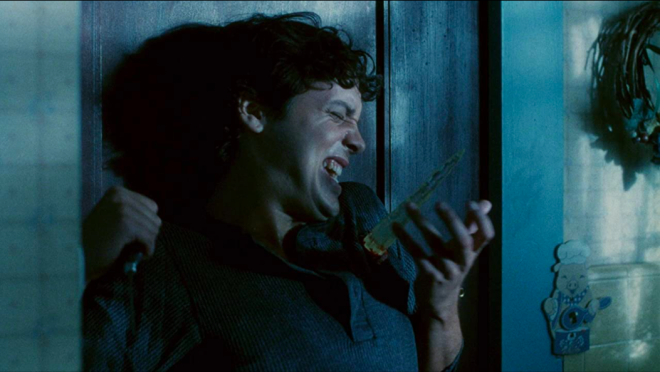 MVD Rewind Collection likely didn’t have to do a new restoration of Jack Frost and simply used Vinegar Syndrome’s 2016 scanning and restoration in 2K from the 35mm vault elements. The movie is presented in high definition (1080p) in a 1:78:1 aspect ratio. The folks at Vinegar Syndrome are truly tapped into the craft of restoring the film. They sharpen the edges and tweak the settings for a fluid look almost every time.
Sadly, there are a few noticeable spots when the colors don’t match. A clean, naturally colored wide shot will cut to a close-up that has more of a green hue. It’s nothing that will grind your gears as it feeds into the dirty VHS copy feel. Even the film’s director of photography, Dean Lent, admits on a bonus feature that he saw himself as more of a director than someone who knew lighting and color. Nevertheless, the camera positioning is something to be admired, especially with all the smoke-and-mirrors activity they have to do to make Jack Frost feel like a legit, functioning killer snowman. 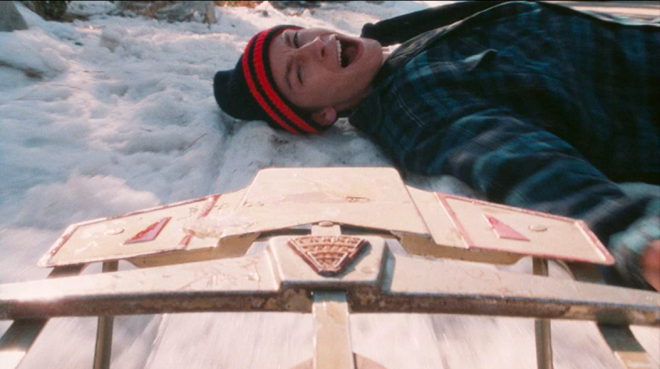 Where the visual polishes go burr, the audio snowballs into something worthwhile. The audio (5.1 DTS-HD MA & LPCM 2.0 Stereo) picks up everything to its most lifelike sound. You can hear icicles driving into flesh and Jack Frost slushing across the floor. Lines of dialogue that I completely missed on the VHS format are presented here in crystal form. One joke following the death of a kid is heard in the background, and it gave me the biggest belly laugh I’ve had in quite some time. (So, keep an ear out after a sled decapitation scene.)

Some special features are more compelling than others. For example, the two Vinegar Syndrome-produced interviews are well done and keep the material on target, while a thrown-in Zoom interview with actor Scott MacDonald is more for MacDonald’s fans.

With its consistently fine details and polarizing sounds, MVD Rewind Collection's Jack Frost Blu-ray is worth a look as a cool piece of shelf jewelry and a cheerfully light horror parody. The movie will not boost your IQ or anything, but it'll give you an extreme case of the giggles that's a true gift. Worth A Look