Yikes! There’s no denying that it might feel a bit icky grabbing MVD Rewind Collection’s Blu-ray release of 1990’s Monday Morning off the shelf. It prominently features someone holding a gun while entering a school on its front cover. However, if you haven’t seen the movie, and not many have, that’s not the only reason to leave it alone. The film's odd structure and themes are only part of what is working against it. Thankfully, it scores a respectable A/V presentation, especially when compared to the VHS version (included on this disc). For a movie that'll only appeal to a select few, it's somewhat amusing if you're willing to give it a try. But ultimately, it's For Fans Only!

Somewhere buried in this “action thriller” is an interesting flick about gun violence and how people behave when they’re backed into impossible corners. But Monday Morning - written and directed by famed movie producer Don Murphy (Natural Born Killers and the Transformers franchise) - doesn’t operate like anything close to what resembles human behavior. It's a tonally odd movie that is so at odds with itself. For one, it takes an hour to get to the titular event, which could have been the focus of the entire movie. Instead, we spend so much time doing nothing. It’s a bunch of ass-grabbing, nonsensical character development and meaningless adventures to pass the time until what was promised happens. 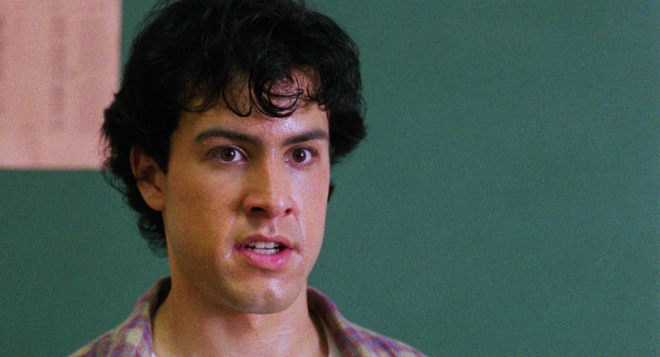 Here’s the story: Noah Blake’s Bobby Parker is a thirty-year-old teenager from the wrong side of the tracks. His family never seems to settle in a place, which has disrupted the family's bonds, especially between Bobby and his cold daddy. Thankfully, Bobby has his forgettable best bud, Bill (Karl Wiedergott), who’s just there. But he’s there for one unintentionally funny moment in the beginning when Bobby is trying to break back into his parents’ house. Naturally, Bill is nervous about it, to which Bobby cooly replies, “Don’t think of it as breaking in.” Uh, OK?

Bobby and Bill attend Oceana High, and they’re not the type who are seen slapping hands with all the dude-bros in letterman jackets and Karate Kid villain haircuts. They’re outsiders – and because of that (and because Bobby is dating one of their sisters), the bullies are out for blood. One of the baddies is played by European Vacation’s Jason Lively. So, hey. A familiar face if that entices you. 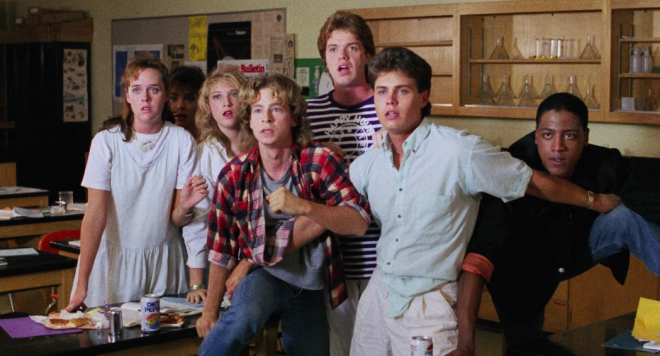 Come Monday morning (because it’s been a few days in the movie already), all hell is about to break loose. Bad boy James (Brandon Hooper) is ready to teach Bobby a lesson, which comes in the form of a lead salad threat. So, James brings a gun to school, but his plan backfires, and a teacher is shot in the hustle. The problem is no one in the class saw the gun go off except Bobby and James. So, who should everyone believe?

I think this film could have been compelling if Murphy stuck to his original vision of it being “The Breakfast Club with guns.” The openness of the narrative doesn’t do it any favors, and bringing the action to one morning/day could have got the ticker up through our investment. It would have stripped out the junk that's typically tossed in ‘80s and early ‘90s movies. To me, this is fear coming from its creator. 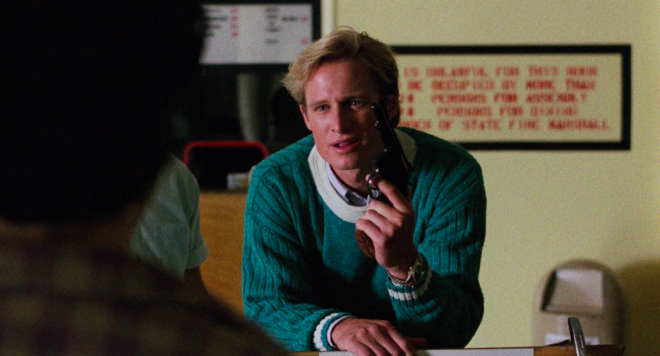 The tone is all over the map. You'll have a serious scene undercut by a puzzling gag. One to keep a look out for involves a character flicking the teacher’s blood on another student for the hell of it. Don’t get me wrong, I laughed at that moment because it came out of nowhere, and I was desperate for some energy that felt alive. But it shows you that this movie is so confused about what it wants to be. And don't get me started on the head-scratching ending. In no reality would something like that happen, and it should almost be seen to be believed.

Monday Morning (a.k.a. Class of Fear) is a student film that feels like a student film. The MVD Rewind Collection folks saw something in this, or maybe it’s simply their connection with Murphy after doing 1994’s Double Dragon. Whatever the case, this is near the bottom of the Rewind Collection’s barrel of releases. It’s neither fun nor intense. It’s just a 100-percent bummer. 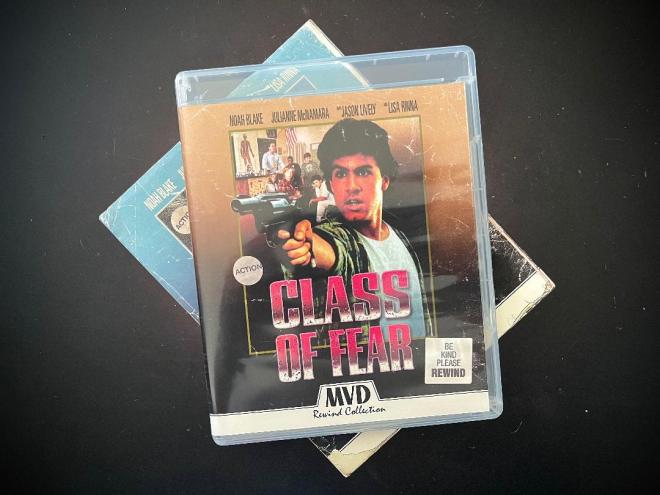 Vital Disc Stats: The Blu-ray
The now-available Blu-ray release is housed inside a cardboard slipcover and a clear plastic casing with reversible cover art and a mini poster. Like all of the Rewind Collection’s packaging, it looks as snazzy as the other 37 titles in the collection.

For the uninitiated, the Rewind Collection designs its Blu-rays to look like VHS tapes. Sometimes, they have “be kind, rewind” stickers on the covers (like this one), a videotape poking out of the side and/or a sun-faded tint. Monday Morning has one of the best designs in the line-up. So, kudos to David E. Wilkinson for his illustrations, especially his edge wear work.

The film is a new high definition (1080p) transfer. The presentation of the main feature is in a 1.85:1 aspect ratio from the original camera negative. There’s a heavy amount of film grain, but not so much that it feels distracting. When you look at it side by side with the VHS transfer that’s included in the special features, it’s miraculous how much better it looks. 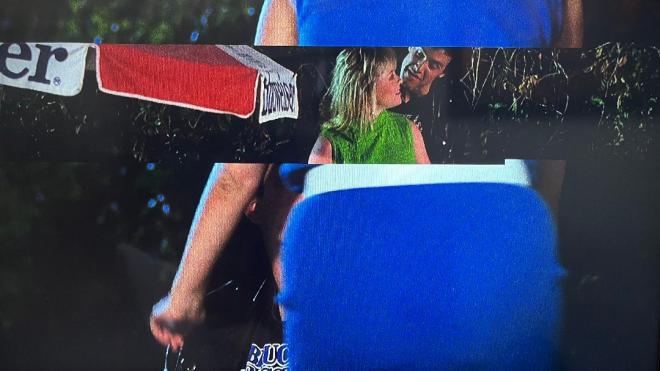 However, if you’re more of a hawk watcher, you might notice a few render errors (as pictured above). It’s a quick flash, similar to the cigarette burns that Tyler Durden points out in Fight Club. It happens a handful of times throughout the movie. But I must admit, it’s amusing to see which clip found itself wedged into the scene.

Additionally, there are times when the darks are fuzzy, and the brighter scenes are heavy on saturation. One noticeable sequence where the saturation is an issue is set on a sports field, which is the one featured on the back cover. But again, if you take a peek at the VHS copy, it’s like watching a 4K transfer of Blade Runner. Well, not really. But you get the point. 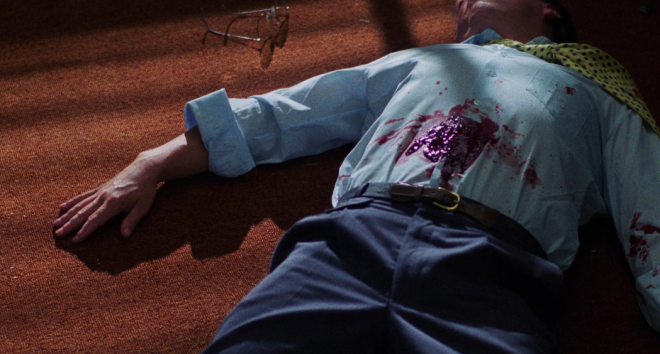 At least most of the indoor scenes look sharp and have a nice color balance. You just have to consider the equipment that captured it at the time. So, I point out the flaws and recognize that this movie is a student film shot on a limited budget. So, don’t expect a nice, clean polish.

Monday Morning features a decent enough LPCM 2.0 Mono track. The dialogue is well balanced where you don’t have to throw on the subtitles or frequently adjust the volume. The musical score and needle drops are also well mixed without drowning out the dialogue and sound effects. That said, the one major ding is that there’s a constant hum throughout the entire movie. At first, I thought it was just me. But then, I popped in another movie and experienced no such thing. So, that was pretty irritating.

Sadly, there’s not much here, and there’s no funny commentary track like Dirty Laundry. 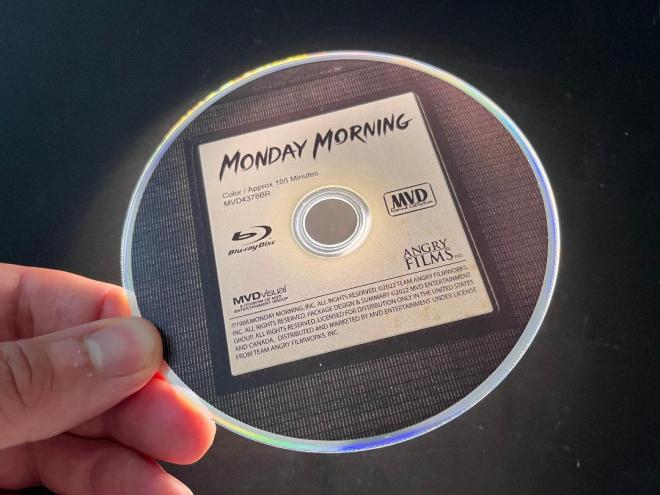 Monday Morning is a ridiculous movie that probably doesn’t belong on your shelf if you haven’t made the deep plunge into the MVD Rewind Collection. The design work for this set really is the shining star. It's always a nice tug at the heartstrings for those who value the days of VHS and hitting the rental shop on a Friday night. But other than the upgrades in video and audio and some decent bonus features, unfortunately, there’s very little else to appreciate. For Fans Only!