When Robert Duvall is sent to prison in Mexico by his corrupt grandfather John Huston, his wife Jill Ireland must turn to the craziest pilot to get him out - Charles Bronson! Breakout is a slick action/comedy prison break flick that gives Bronson a rare turn to show his natural comedic timing in wildly entertaining show. Kino Lorber Studio Classics breaks out a new Blu-ray with a solid A/V presentation and a nice consignment of bonus features to match. If you're a Bronson fan, call this one Recommended

Jay Wagner (Robert Duvall) is your average businessman. Unassuming, he does the job his grandfather Harris Wagner (John Huston) gives him. While in Mexico, Harris has it rigged to send his ambitious grandson to jail for murder. Sentenced to hard time in an overcrowded Mexican prison, it’s up to Jay’s wife Ann (Jill Ireland) to come up with a way to get him out of the clink. It’ll take a crazy man like Nick Colton (Charles Bronson), a pilot with nothing to lose and everything to gain to fly into Mexico, break Jay out, and skip back across the border. Thankfully he's got help from his pal Hawkins (Randy Quaid) and Myrna (Sheree North) to come up with a way to distract the guards and get their big payday!

If there’s one thing Charles Bronson is well known for is the everyman tough guy. From Mr. Majestic to Death Wish to Once Upon a Time in the West, Bronson carried an aura of unmovable manliness and strength. Even in his relatively silent side-character roles like Vera Cruz, he had this tough guy everyman presence. While his later films, particularly his Cannon years, he got to show some measure of wit with a well-timed one-liner, he never really got to lean into his natural comedic talents. Other than From Noon Till Three, Breakout is one of the relatively few films where Bronson got to play silly while delivering the action-packed character folks expected.

That said Breakout isn’t his strongest film. It’s got a great setup for a hit 70s action classic, but it doesn’t seize the best opportunities. The cast is great, everyone is in the right place for this film. John Huston is right at home leaning into the elder villain type that would mark much of his 1970s work. Robert Duvall may not get to play the lead but he’s a welcome addition to the show making him more than a side note to motivate Jill Ireland. And speaking of Ireland, she once again proves to be one of the few women to put a tough guy character like Bronson in his place. It’s why Bronson frequently demanded Ireland be cast as his opposite. 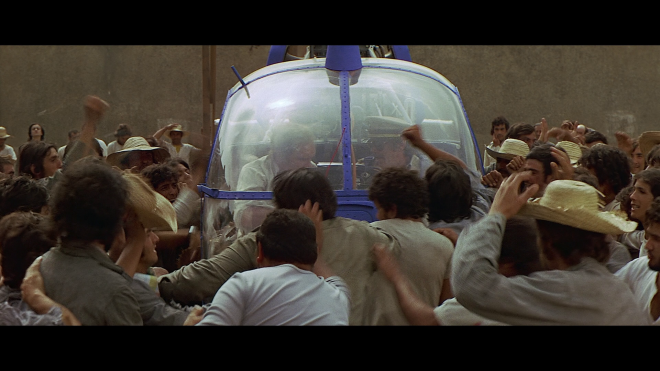 With the great characters and actors in place, the main issue I have with this film is its rather repetitive direction from Tom Gries and a screenplay that stutters its way through. Gries is no stranger to action and when bullets are flying or a helicopter is landing in a prison, this film is clicking along at a great clip. But then several times the film works hard to build up tension and suspense and deliver action-packed scenes, but then like a popped balloon the following scenes just stall out the momentum. What should have been straightforward and to the point, the film begins to drift into a very convoluted final act. While the climax is cool and gives Bronson another shot to showcase his action chops, it also feels out of place as if it belongs in a different movie entirely. But that said, that is one heck of a way to dispose of a final bad guy!

Breakout may be an inconsistent film, it is at the very least a fun one. The plot mechanics monkey things up, but there’s a lot to enjoy. It’s not overly complicated and it doesn’t strive to be anything more than it is. It entertains. Thanks to Bronson’s a-typical performance, fans of the actor are given something refreshing from his average turn. A young Randy Quaid pops up as Bronson’s mechanic pal and their screen chemistry is a hoot. So yeah, at the end of the day maybe not the greatest thing ever, but Breakout has enough going for it to make it worth your time. I know of a few Bronson die-hards who put this one high on the list. I’m not quite that generous with it, but as this is my third or fourth outing, I do enjoy it every time I give it a watch. 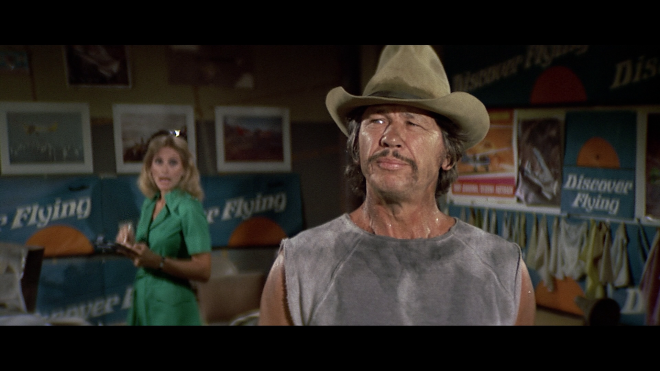 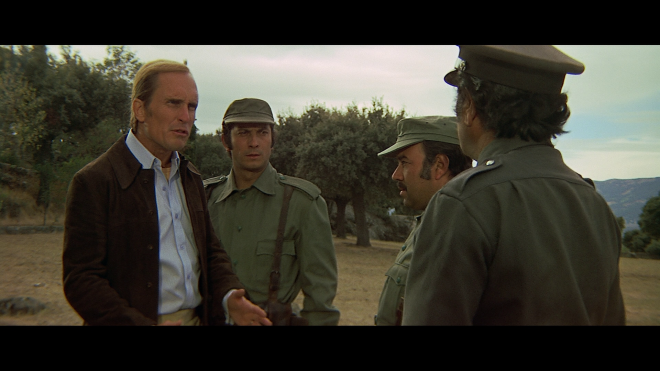 For this first US Blu-ray release, KLSC delivers an overall pleasing 2.35:1 1080p transfer. While there are a number of positives, there are a few quibbles that stack up. For starters, this transfer is a bit on the harsh side. There are sequences that look genuinely terrific indicative of a more recent scan, but then there will be an adjoining scene that doesn’t enjoy the same clarity with rougher fine lines, a loss of detail and textures, and also look notably flat by comparison. This film has already been widely available in other territories so I doubt we’re getting a new transfer. Colors are fairly good but there are some segments where brightness levels and primaries are overly hot. One moment this transfer is on point and looks great, the next it can look a little off. Not terrible by any means and certainly better than the old DVD, but not one to put up on a pedestal either. 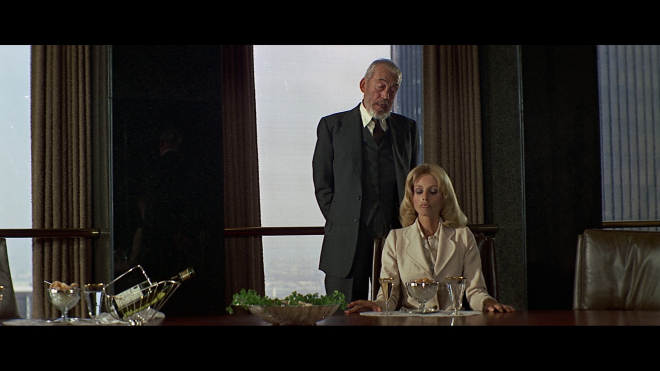 Fairing better than the video transfer is the terrific DTS-HD MA 2.0 track. Dialog is crystal clear and some of the great exchanges between Bronson and Ireland practically crackle. The terrific Jerry Goldsmith score comes without fantastic clarity. Action sequences pick up the soundscape nicely offering a great sense of dimension and imaging. The big helicopter sequence is of course the highlight, but any of the key action sequences are true standouts. Levels are spot on without issue there and there aren’t any age-related issues to report. 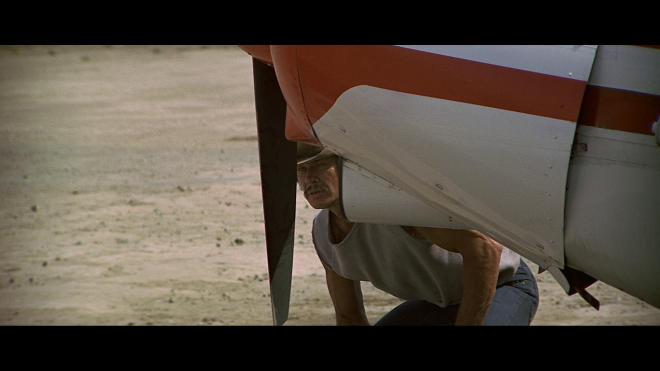 Bonus features for this release of Breakout aren’t very plentiful, but when you get a Paul Talbot audio commentary for a Bronson movie, you don’t really need too much else! Talbot once again offers up a lot of info about the production and is generally an entertaining and informative host for this track. After that, we get the standard collection of trailers and marketing materials. 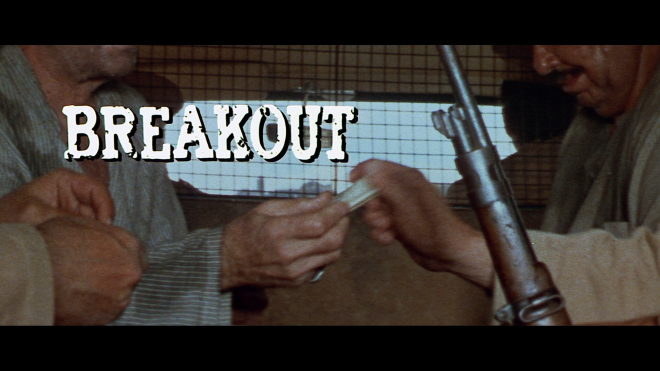 In my growing collection of Bronson films on Blu-ray, Breakout isn’t the highest-ranking film on the list, but then it’s far from the worst. This is a film with its heart in the right place. Some production hiccups and what feels like a 3/4 -finished script keep the film from genuine action-packed greatness. On the plus side of things, Bronson is great in it. He gets to once again prove his action man chops but in a rare turn also delivers a genuinely funny performance. Kino Lorber Studio Classics brings Breakout to Blu-ray in the US for the first time. Sporting a solid video transfer, there’s room for improvement but it’s still pretty good. The audio is on point and the new commentary track is well worth a listen for any Bronson fan. Recommended.