Notorious for its studio interference ruining a potentially good movie, Wes Craven's Cursed is far from the worst in his catalog and is a decently entertaining werewolf flick, featuring Christina Ricc, Jessie Eisenberg and Judy Greer. Courtesy of Scream Factory, the cult horror favorite curses Blu-ray with a great-looking audio and video presentation and a small but nonetheless nice set of bonuses. Overall, the package is Recommended.

At the risk of sounding like a loyal, dutiful fanboy, Wes Craven always manages to churn out bizarrely entertaining flicks. Even those ranking as his worst efforts are still a good deal of fun, something to randomly watch as easy mindless escapism. And for me, Cursed is no exception. In fact, this little creature feature, slavering in the PG-13 misunderstood teen angst melodrama that was popular in the late-90s and early-2000s horror, doesn't fall at the bottom tier of his catalog where Night Visions, Summer of Fear, Vampire in Brooklyn and a few others have set up permanent residence. Whatever faults and shortcomings being snarled at this movie — all of which are mostly justified, I must admit — can actually be blamed solely on studio interference, and the Weinstein's constant meddling was notoriously awful for this production.

The problems range from massive rewrites of Kevin Williamson's screenplay and transforming characters into different roles, which entailed major cast changes, to metamorphosing Williamson's story into an entirely different plot that required reshoots of nearly ninety percent of the film. Arguably, the greatest loss is Rick Baker's original werewolf design being replaced by laughably cheap CGI visuals and major edits to downgrade the planned R-rating in favor of attracting the PG-13 crowd. If ever a movie's title was most fitting and deserved, it has to be this one because it seemed cursed from the very start. And somehow, in spite of all this chaos and meddling, Craven nonetheless turned what should have been a complete disaster into yet another one of his curiously entertaining oddities landing somewhere in the middle of his oeuvre.

This isn't a diamond-in-the-rough type of horror feature, mind you. Probably more like one of those plastic-colored jewels from the gift shop you'd buy for your niece or nephew. It looks all slick and stylish on the outside — thanks to Robert McLachlan's cinematography, Marco Beltrami's score, and a cast of young attractive people. But ultimately, it's just a piece of mass-produced plastic sitting on a shelf in the kid's bedroom, much like many of the teen horror flicks regurgitated around this same time, which was the Weinstein's primary goal, of course. We could read a bit deeper into the story if we're so inclined, like how Christina Ricci and Jesse Eisenberg battling their inner animalistic rage is really an allegory for siblings dealing with the loss of their parents while challenged by typical high school drama, a career, and relationships.

But honestly, that possible analysis doesn't hold up in the end because much like the production itself and the theme about werewolves coupled with adolescent angst, Cursed doesn't know what it wants to be. We have the usual Kevin Williamson device of referencing other movies, most notably the 1941 classic The Wolf Man and James Whale's two Frankenstein films, suggesting another stab at deconstructing a horror subgenre like the previous Craven-Williamson collaboration, Scream. But that also doesn't go anywhere of value, instead shoehorning a melodrama subplot about siblings coping through loss together and laughably dumb attempts at throwing our suspicions off with three red herrings in the third act. The whole thing is just a bonkers, wacky good time while munching on a bowl of Captain Crunch. 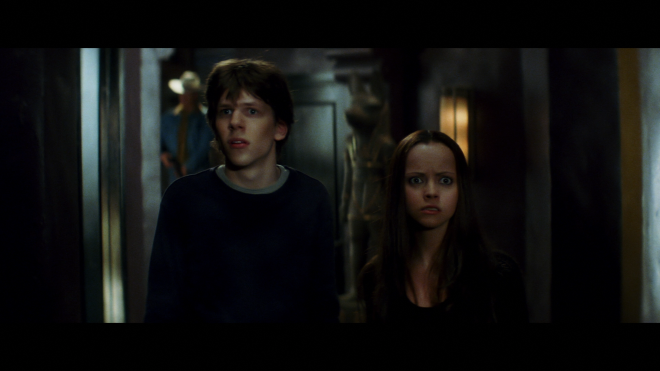 Vital Disc Stats: The Blu-ray
Scream Factory brings Wes Craven's Cursed to Blu-ray as a two-disc Collector's Edition. The two Region A locked, BD50 discs are housed inside the standard blue case on opposing panels with brand new reversible cover art and a slipcover. The first disc comes with the original 97-minute theatrical cut of the movie with a majority of the bonus features while the second disc contains a 99-minute "Unrated Cut," which adds 2 minutes of gore and violence. At startup, the disc goes to a menu screen with full-motion clips, music and the usual options.

The cult Craven favorite curses Blu-ray with a great-looking 1080p/AVC MPEG-4 encode thanks to a new 4K remaster of the original 35mm camera negatives. The HD transfer boasts a richly-saturated array of primaries, from the animated crimson reds of blood to the lively greens in the surrounding foliage. The orange-teal cinematography leans more toward the warmer colors, like tiger oranges and marigold yellows, but there are plenty of scenes oozing in full-bodied, vibrant blue tones, especially the nighttime scenes. Awash in a very thin layer of natural grain that's consistent throughout, fine lines and objects are always distinct and plainly visible, and facial complexions appear healthy and revealing. Contrast balance supplies clean, crisp whites and excellent, brilliant highlights without washing over the sharper details. Likewise, black levels are accurate and inky with only a couple of minor instances of mild crushing, but otherwise, shadow delineation remains strong during the darkest moments. Presented in a 2.40:1 aspect ratio, the movie has never looked better as it does in this collector's edition. (Video Rating: 84/100)

The dark horror comedy also comes with a howling impressive DTS-HD Master Audio 5.1 soundtrack, furnishing the movie with an amusingly immersive experience and a couple of demo-worthy moments. The particular scene that quickly comes to mind is the car wreck on Mulholland Drive when the werewolf is rummaging around the bushes. Leaves and branches are heard discretely rustling in one corner of the room, and then, the creature flawlessly moves to the rear and to the other side of the room. When applying the receivers' Auro-3D up-mixing functionality, the ambient effects convincingly extend to the heights, adding a welcomed layer to an already excellent lossless design.

Displaying outstanding definition and channel balance from start to finish, imaging continuously feels wide and expansive as background activity smoothly moves across the fronts and lightly bleeds into the heights. Even during the loudest segments, the mid-range is surprisingly extensive and exhibits superb detailing into the upper frequencies while Marco Beltrami's score enjoys a great deal of warmth and fidelity. Vocals are always precise and distinct, as well. The low-end could arguably be punchier and more commanding to give the visuals, especially whenever the werewolf makes an appearance, but for the most part, the bass is appropriate and forceful enough to provide the action with appreciable weight. (Audio Rating: 88/100)

For this Collector's Edition Blu-ray, the folks at Scream Factory have ported over the same bonus features enjoyed on the previous DVD release and added a pair of new supplements.

Although far from his best, Wes Craven's Cursed is also far from his worst, managing to salvage what would have been a complete disaster of a movie into a decently entertaining werewolf flick, featuring passable performances by Christina Ricc, Jessie Eisenberg and Judy Greer. Courtesy of Scream Factory, the cult Craven favorite curses Blu-ray with a great-looking HD video and an awesome DTS-HD MA soundtrack thanks to a new remaster of the OCN. Arriving with a small but nonetheless nice assortment of bonus features, the overall BD package is recommended.