Gene Hackman, Richard Crenna, and James Franciscus are the doomed crew of Ironman One in Marooned. When their return thrusters fail to fire, the three astronauts are trapped in space, leaving Gregory Peck and NASA to find a way to save them before their oxygen runs out. Sturges directs this human character study with an assured hand with some impressive visual effects. Thanks to Australian distributor Imprint, Marooned comes to Blu-ray with an overall pleasing A/V presentation and some solid extra features. It’s not the greatest movie ever but it is certainly Worth A Look.

After five months in a state-of-the-art orbiting research laboratory, the crew of Ironman One - Jim Pruett (Richard Crenna), Clayton Stone (James Franciscus), and Buzz Lloyd (Gene Hackman) are coming home. But when the thrusters on their return capsule fail to fire, the crew is trapped with limited life support and no way to get back to earth or to the well-supplied space station. Now NASA director Charles Keith (Gregory Peck) and his lead engineer Ted Dougherty (David Janssen) are in a race against time to find a way to save the trapped astronauts before their air runs out.

Based on the novel by Martin Caidin - it’s a great read if you pick up a copy - Marooned is essentially a high-concept sci-fi version of the Apollo 13 disaster. Only this film predates that historical event by a year! This is an often dramatic and thrilling examination of humanity’s best intentions in the face of catastrophe. If only it was a better movie! It’s far from terrible or unwatchable, but it’s also not the star-reaching nail-biting space thriller that it easily could have been either.

John Sturgis had a hand in several of the greatest films ever made… as well as a few notable duds. His notable personal issues could be tied to a film’s failure, but other times he just made some questionable decisions. I haven’t heard if Sturges’ own behavior was at fault for how this film turned out, but I believe it’s some of the creative decisions that take issue for Marooned. To start, the film has a very languid pace to it as life-or-death decisions are made with serious dramatic discussions and high-tension events. With that languid pace, takes are very long without some needed editing to tighten the drama. Adding to the languid nature of the film is the complete lack of an original score. Instead, we get background sound effects and wherever the action takes place in outer space, there’s an ethereal ambient sound that feels more fitting as a backing track in a Windham Hill album. This puts a lot of heavy load on the cast to carry and sadly only some of the actors available were up for the task. 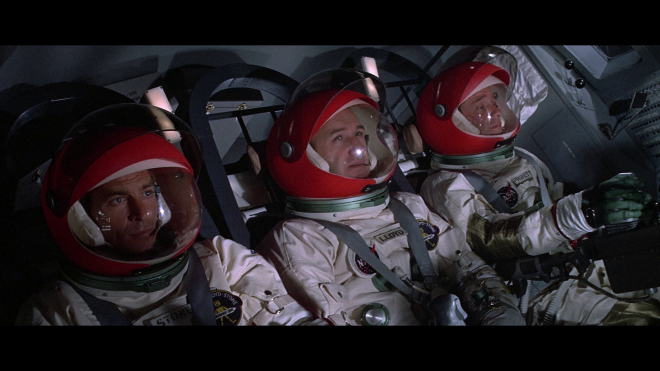 Gregory Peck delivers the traditional man of reason he’s all too well known for but in this case, he brings welcome energy and urgency. He has to make decisions that not only affect the lives of the three stranded astronauts but the men on the ground. David Janssen puts his gravelly voice to good work as the irrational, passionate foil for Peck to play off of. He’s the one dedicated to rescuing those men no matter the financial cost or the lives lost in the process. It’s those scenes that work best for the film.

While the film features some impressive Oscar-winning visual effects, it’s the actual space scenes with our three astronauts that drag this beast out. That’s largely because Hackman is the only one who feels like he came to play having been gifted with the most dramatically interesting character. The way Richard Crenna and James Franciscus’s characters are written, they just kind of “float” there and take what comes to them with only a few sparks. Hackman on the other hand gets to go full out and show why he was nominated for an Oscar a year earlier in Bonnie and Clyde. He handily steals the show, bringing a much-needed kick of energy to some of the film’s deathly slow scenes.

Fans of Mystery Science Theater 3000 may know this film starring Gene “Zeppelin Lungs” Hackman better as the retitled “Space Travelers” from the defunct distributor Film Ventures International. While I consider that a classic MST3k episode, this film, unfortunately, falls victim to the lethal editing scissors that show could wield on some films. So on that note, if that’s how you know this film, don’t think for a minute you’ve actually seen Marooned. All faults with the pace aside, this is actually a solid flick and a good watch. There are clunky stretches, sure,  but when you keep in mind this was a thriller made in the heat of the space race and NASA had only just landed on the moon five months before its premiere - it’s a timely piece of entertainment.

Vital Disc Stats: The Blu-ray
Marooned arrives on Blu-ray thanks to Australian label Imprint in a single disc release. Pressed on a Region Free BD-50 disc, the disc is housed in a sturdy clear case with slipcase cover. The disc loads to a static image main menu with traditional navigation options. 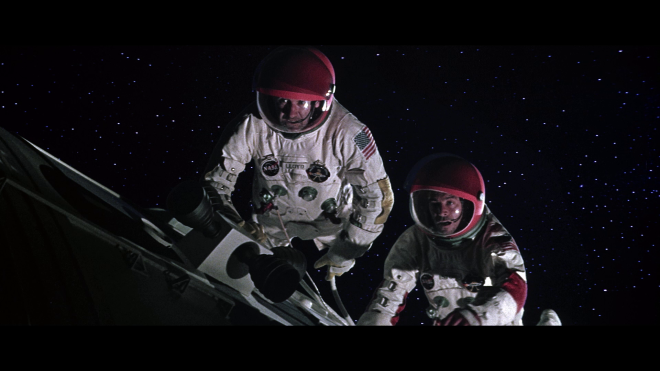 Marooned orbits onto Blu-ray with a pleasing 2.35:1 1080p transfer. While it certainly could benefit from a full restoration effort, the transfer easily outpaces the previous DVD release and certainly is a vast improvement over the MST3k presentation. The principal issue knocking this transfer is the notable speckling that is a frequent companion for each scene. It’s not horribly distracting but it’s a clear sign there hasn’t been any kind of cleanup work for this HD master. There are also a couple of oddly soft out-of-focus shots that look to have been sourced from other elements, or may even be SD inserts - the scene where NASA is first discussing the rescue mission is the clearest example. But for a 50+ year film that wasn’t a huge hit, none of these issues are deal-breakers in the least. Most of the time the image is quite nice, displaying a lovely cinematic appearance with a healthy grain structure and fine details in facial features and costumes. Some of the effects shots are damned impressive for an era where digital trickery wasn’t available. Colors are on point with healthy skin tones and bold primaries. All around a solid image. 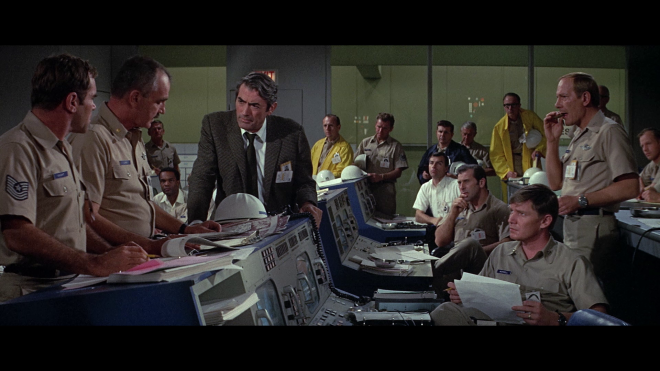 Marooned sports an effective LPCM 2.0 audio mix. This track is largely dialog and sound effects. As I mentioned in the main review, there’s no score - even for the closing credits so the dynamic presence of the soundscape is limited to whatever you’re seeing on screen. Even in a room full of people, there are some stretches where there’s next to nothing occupying your channels. When things are active like transporting the experimental rescue ship or the hurricane sequences, the mix picks up some ground. Likewise, the outer space climax has its engagements to get things exciting, but a traditional score instead of that bizarre ambient sound would have done wonders for pumping up the excitement. 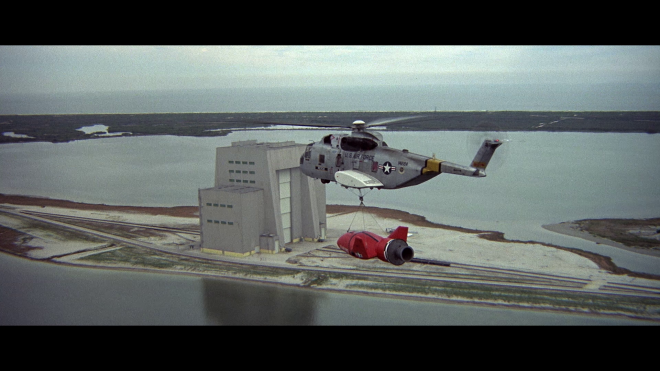 Imprint continues to deliver releases with a pretty solid selection of bonus features. The audio commentary with Bryan Reesman is a worthwhile listen as is the Kim Newman interview. Now, not listed or accessible in the main menu is a third audio track that is like an isolated score and sound effects track. This is just damn weird to listen to since there isn’t anything resembling a traditional music score for this film and plays more like the strangest ASMR track you could possibly plug into. But with that said, I left it on while I worked this review up and it was effective background noise! So there you go. You must use your player’s audio select function on your remote to find this track. 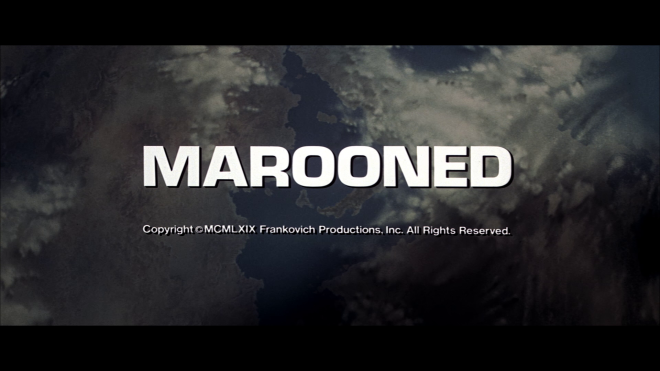 Marooned isn’t a great movie - certainly not as great as it could have been considering the era and the talent involved. Frank Capra was supposed to direct at one point and I can’t help but figure how much more interesting the film could have been. Such as it is, we have some great dramatic performances for a space adventure film that often can feel rather inert and without thrust. But when it moves, it’s a grand undertaking with some damned impressive visual effects. Australian label Imprint delivers this semi-forgotten sci-fi flick to Blu-ray with a respectable A/V presentation and a nice collection of bonus features. Die hard space and sci-fi fans will certainly be interested in this release, newcomers not familiar or who missed the MST3k release should consider it Worth A Look