Captains of the Clouds

Captains of the Clouds never scales celestial heights, but Warner Archive's Blu-ray presentation reaches the stratosphere, thanks to a stunningly beautiful transfer culled from a 4K scan of the original nitrate Technicolor negatives and robust lossless audio track. Michael Curtiz's salute to the Royal Canadian Air Force during the early days of World War II remains a solid James Cagney vehicle and rousing propaganda flick, but it pales when compared to the more renowned films of its actor and director. The movie may not quite make the grade, but if you love watching meticulously restored classics, you'll definitely want to revel in the splendor of this top-notch disc. Recommended.

James Cagney and director Michael Curtiz made two movies together in 1942. The one you've heard of won Cagney a Best Actor Oscar and stands as arguably his most highly regarded film. The other one has probably flown under your radar, and while it's a perfectly respectable production, it's far from either Cagney's or Curtiz's best. While Yankee Doodle Dandy became a legacy credit for both men, Captains of the Clouds faded from view after its initial release and slipped into obscurity.

Until now. Warner Archive has rescued this rousing, beautifully filmed World War II flick from oblivion and given it a marvelous makeover that almost masks the movie's shortcomings. Most notable as Cagney's first Technicolor film, Captains of the Clouds honors the brave men of the Royal Canadian Air Force and was shot entirely on location in Canada. The rugged scenery, majestic aerial photography, and all those lush Technicolor hues eclipse the thin story that brims with propaganda but lacks much drama until the climactic dogfight. 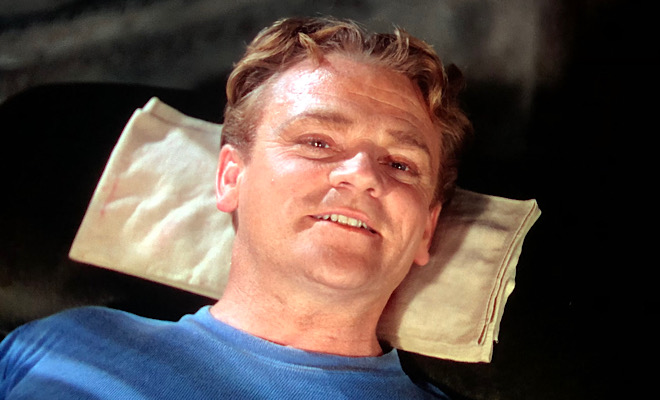 Brian MacLean (Cagney) is one of several competing Bush Pilots who fly seaplanes into remote areas to deliver supplies. Brash and cocky, he makes a habit of swooping in and stealing both jobs and women from his resentful colleagues. Brian’s bad behavior and serial rule-breaking breed a rivalry with Johnny Dutton (Dennis Morgan), a humble straight-arrow who intends to marry the beautiful but (unbeknownst to him) unfaithful Emily Foster (Brenda Marshall), but before he can pop the question, Brian ignites both her passion and desire for a cosmopolitan life.

One day, a stirring radio speech by Winston Churchill inspires Brian and his cronies to help the war effort by joining the Royal Canadian Air Force. Their desire to pilot fighter planes, however, is quickly dashed when they learn they’re too old for combat and will be training young pilots instead. Brian's boredom with his humdrum job leads him to start breaking rules again, but will the tragic consequences of his reckless actions finally inspire him to change his ways? 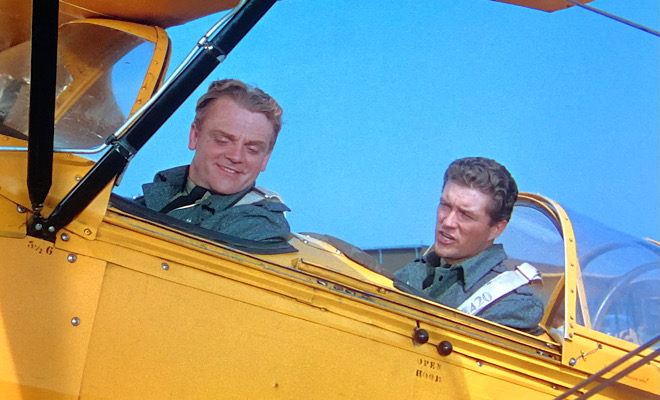 I’ve been a Cagney fan for decades, but I’d never seen Captains of the Clouds prior to this Blu-ray release. While Curtiz directs with his customary confidence and constructs a fluid, breezy film peppered with excitement, there’s not enough story to sustain the picture’s almost two-hour running time. Captains of the Clouds is never boring, but it occasionally drags and only captivates in fits and starts.

Part of the problem is the movie’s (understandable) commitment to detailing the training practices of the RCAF, providing some military pageantry, and drumming up support for the war. Released in February of 1942, Captains of the Clouds was shot prior to America’s entry into World War II and was one of the first war-themed films to premiere after the Japanese attack on Pearl Harbor. Though it focuses on Canada and Great Britain, the movie surely struck a chord with contemporary American audiences, yet unlike other, more enduring World War II movies, its story only becomes urgent and emotionally affecting during its final 20 minutes.

Cagney plays his typical pugnacious part with his customary bravado. The role doesn’t tax his talent, but his Irish charm shines through, especially in Technicolor, which highlights his red hair and ruddy complexion. Though many of Brian’s impulsive, irresponsible actions rub us the wrong way, Cagney - as he does with so many similar characters - makes him a likable rogue, and we continually root for his redemption. 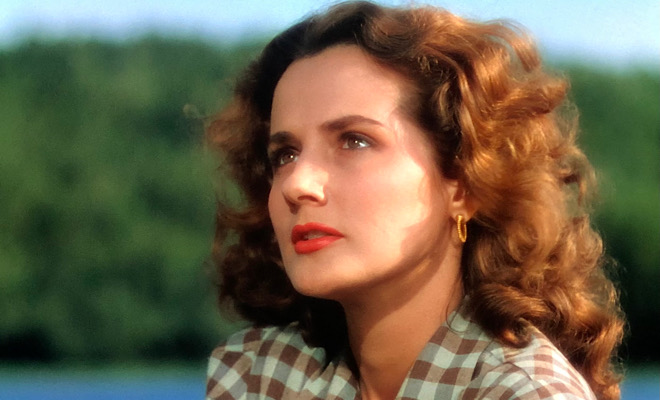 Morgan does what he can with a one-dimensional role, and the sexy, exotic Marshall, who looks ravishing in Technicolor, provides welcome glamor and spitfire. Though the three leads keep Captains of the Clouds aloft, the film would crash and burn without the considerable contributions of the Warner stock company. Alan Hale, Reginald Gardiner, George Tobias, and Reginald Denny all add heart, warmth, humor, and flair to a film that badly needs such qualities to compensate for its ho-hum narrative.

Captains of the Clouds would earn well-deserved Oscar nominations for its color cinematography and art direction-interior decoration. Such nods make sense, because Curtiz’s film stokes our senses. Drinking in the Technicolor hues and scenic vistas, absorbing the thrill of flight, admiring the attractive actors, and appreciating the production values… those are the pleasures and attributes of Captains of the Clouds, and they’re in great enough supply to keep us satisfied. This Cagney-Curtiz collaboration may not fly as high as Yankee Doodle Dandy, but it’s a solid Class A production that sure is pretty to look at. 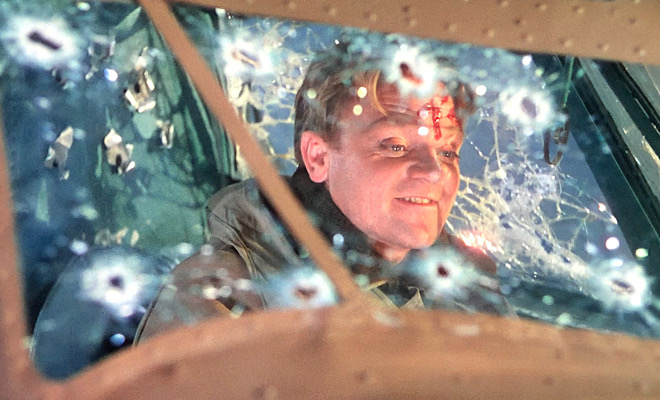 Vital Disc Stats: The Blu-ray
Captains of the Clouds arrives on Blu-ray packaged in a standard case. Video codec is 1080p/AVC MPEG-4 and audio is DTS-HD Master Audio 2.0 mono. Once the disc is inserted into the player, the static menu without music immediately pops up; no previews or promos precede it.

A new HD master struck from a 4K scan of the original nitrate Technicolor camera negatives yields another breathtaking transfer from Warner Archive. Terrific clarity, contrast, and color timing distinguish the 1080p/AVC MPEG-4 rendering, which faithfully honors Sol Polito's lush, Oscar-nominated cinematography. Faint grain preserves the feel of celluloid, but the texture is nicely resolved, and not a single nick, mark, or errant scratch dot the pristine source material. Rich blacks and bright yet stable whites anchor the image, but it's the glorious Technicolor hues that steal focus. Perhaps because much of Captains of the Clouds was shot outdoors, the Technicolor looks more natural and true-to-life than usual. Reds still pop (Brenda Marshall's lipstick and red dress in the nightclub scene are attention-grabbers), but the verdant evergreen trees, blue lake water, orange flames, and yellow RCAF planes appear authentic.

Excellent shadow delineation keeps crush at bay, the plaid and checkered costume patterns remain rock-solid throughout, flesh tones are true and stable, and razor-sharp close-ups showcase Cagney's ruddy complexion, Marshall's fresh-faced loveliness, and Morgan's pretty-boy looks. The enhanced clarity makes the rudimentary special effects and use of miniatures more obvious, but that's a small price to pay for such a dazzling picture. Even when the pacing flags, this transfer, which makes an 80-year-old movie look brand new, keeps us engaged and frequently in awe. It's that good.

The DTS-HD Master Audio 2.0 mono track supplies clear, well-modulated sound that showcases Max Steiner's robust, often rousing music score. A wide dynamic scale handles all the highs and lows of the lush orchestrations without any distortion, and all the dialogue is easy to comprehend. Aside from some isolated fisticuffs, shattering glass, and the rat-a-tat-tat of machine gun fire during the dogfight climax, sonic accents are almost exclusively confined to the rumbling, buzzing, and roaring plane engines that help put us in the thick of the aerial action. All the effects are crisp and distinct, and any age-related hiss, pops, or crackle have been meticulously erased. Plot may come at a premium in Captains of the Clouds, but the excellent A/V presentation on this Blu-ray disc helps pick up the slack.

Captains of the Clouds never will be considered one of James Cagney's best movies, but boy, does it look and sound spectacular on Blu-ray. This alternately rousing and plodding salute to the Royal Canadian Air Force in the early days of World War II benefits from Michael Curtiz's assured direction, Cagney's magnetism, beautiful Technicolor cinematography, and many fine supporting performances, but never quite adds up to the sum of its estimable parts. A breathtaking transfer culled from a 4K scan of the original nitrate Technicolor negatives and robust audio add tremendous luster to Captains of the Clouds and make it worthy of attention, at least for classic movie fans. Recommended.