Rick and Morty: The Complete Seasons 1-5

Outside of Seasons 4 and 5, we haven’t done our A+ effort at covering Rick and Morty’s entire run. Part of that was we just didn’t get review sets for the first couple of years and by the time we were covering it - it was so far removed we questioned the necessity to backtrack in order to go forward. But if you’re somehow new to the show, I’m going to give you my very brief overview of the series thus far. 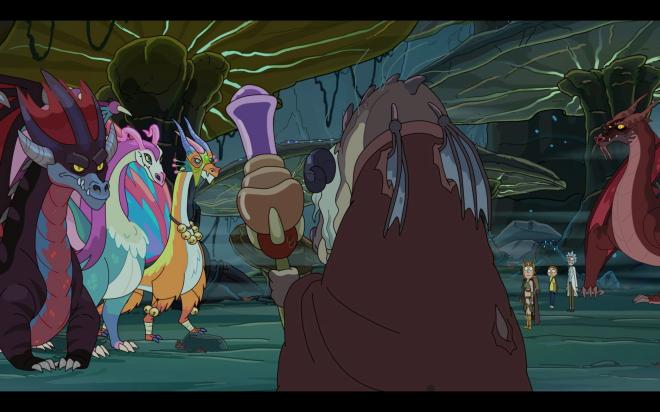 Season 1 and Season 2 are the best of the show. I didn’t jump into the show when it came out because I just didn’t have the time… and I didn’t have cable. Episodes came out sporadically and then there were years of waiting between seasons to amp up anticipation - and the payoff always delivered. These first years are the pitch-perfect shock comedy the show is known for. 5/5 for the pair.

Season 3 was so long in the making that I think fans would have accepted a stick puppet version of the show. After an excruciatingly long wait, it arrived and it delivered the comedy people demanded. It was instantaneously funny picking off the tragically poignant finale of Season 2 and then ran wild from there. You could feel Harmon and Roiland getting more comfortable with a faster working pace than what the previous two seasons delivered, but they didn’t really miss any steps. Crude, shocking, and hilarious. 4.5/5

Season 4 was the first time where I sat back with the show and just felt indifferent. The first couple of episodes were funny and on point, but there’s a long dull-ish middle stretch. Those six or so episodes in the middle there were good for a chuckle but rarely gained any true deep belly laughs. Thankfully it finished strong for the finale episodes but it was bumpy. 3.5/5

Season 5 while I wouldn’t personally call this a return to form, it was certainly better and more consistent than Season 4. If there’s something to note with this season is now that Harmon and Roiland and their team have gotten more comfortable with a standard workflow and episode turnout, the show’s entered that arena of familiarity. There are some intensely funny bits and pieces throughout the season but there isn’t that raw shock value of years past. But, better is better so I’m happy in that area. 4/5

Vital Disc Stats: The Blu-ray
With any new season of Rick and Morty now comes the inevitable multi-season collection. Warner Brothers follows the previous two years and delivers fans of the show Rick and Morty The Complete Seasons 1-5 on Blu-ray. A five-disc Blu-ray + Digital set, each season scores a Region Free BD-50 disc and is housed in a five-disc keepcase with slipcase packaging. Also included is an exclusive poster. Each disc loads to a static image main menu with traditional navigation options.

If you already bought single-season sets or have picked up any of the previous season collections, once again Warner Bros has simply reissued the exact same discs for this Five-Season set. Each season gets the same excellent 1.78:1 1080p transfer we’ve previously witnessed and they continue to look great year after year. There hasn’t been any tinkering of any kind or remastering work so if you own Season One already, you’re getting the same A/V presentation here again.

As with the previous collections Warner released for Rick and Morty this is another collection of the exact same discs as previously available so there’s nothing different there. So again, if you already have any of these seasons or multi-season sets you’re not getting anything new. So for the audio, the anomaly is you’re getting Dolby TrueHD 5.1 tracks for all episodes in Seasons 1-4 but then Season Five rocks out with DTS-HD MA 5.1 tracks for each episode. Again, refer back to the linked reviews above for more detail about each audio presentation.

While each season may not stack up with a lot of in-depth extensive bonus features, what the show lacks in overall quality it makes up for in quantity. The little short segments of each featurette work to build an interesting picture of how the show was made and the work that goes into the writing, animating, and finishing a show like this. There are also some pretty damn funny little extras peppered between the seasons with cast and crew interviews so give those a whirl.

If you’ve been itching to add Rick and Morty to your Blu-ray collection but don’t want to have to pick up each individual season - Warner Bros. has your back. As with the last two multi-season sets, Rick and Morty The Complete Seasons 1-5 combine all of the previously issued discs into a single set. The only thing you’re getting that’s new is packaging and a poster. All content on the discs is identical to the previously issued discs. So if you already own these seasons, you’re getting the exact same disc all over again. Ultimately this set is great for those who haven’t picked up any of the seasons on Blu-ray previously or are looking for a convenient way to save on precious shelf space. However, with a sixth season on the horizon and no signs of cancelation, these annual complete seasons sets may grow more and more redundant. For Fans Only