Overview - Teenage Rockhopper penguin Cody Maverick (voiced by Shia LaBeouf), an up-and-coming surfer, enters his first pro competition. Followed by a camera crew to document his experiences, Cody leaves his family and home in Shiverpool, Antarctica to travel to Pen Gu Island for the Big Z Memorial Surf Off. Along the way, Cody meets Sheboygan surfer Chicken Joe (Jon Heder), famous surf promoter Reggie Belafonte, surf talent scout Mikey Abromowitz, and spirited lifeguard Lani Aliikai (Zooey Deschanel), all of whom recognize Cody's passion for surfing, even if it's a bit misguided at times. Cody believes that winning will bring him the admiration and respect he desires, but when he unexpectedly comes face-to-face with a washed-up old surfer, Cody begins to find his own way, and discovers that a true winner isn't always the one who comes in first.
OVERALL
Worth a Look

Hollywood just can't seem to get enough penguin these days. In just the past couple of years, we've seen the award-winning documentary 'March of the Penguins' break box office records, while the all-CGI smash 'Happy Feet' charmed the pants off just about everyone with its legions of dancing, singing Sphenisciformes. Now, with 'Surf's Up,' we have the latest penguin flick to hit the big screen, putting fin to surfboard for another animated adventure that doesn't skimp on the cute animals and big-time musical numbers.

Presented as a mock-documentary, 'Surf's Up' tells the story of Cody (Shia LaBeouf), a young "Rockhopper" penguin making the journey from his home in Shiverpool, Antarctica, to take part in the Big Z Memorial Surf-Off on the beach of Pen Gu Island. The son of one of the greatest surfers the penguin world has ever known, winning is everything to Cody. Over the course of his adventure, Cody makes some new friends, including surf nut Chicken Joe (Jon Heder) and the spirited lifeguard Lani (Zooey Deschanel). But it is The Geek (Jeff Bridges), an old washed-up pro-surfer, who may just show Cody that a true winner isn't always the one who comes in first.

'Surf's Up' is a film with a bit of a split personality. On one level, it is an obviously contrived and formulaic family flick. We get the usual cute animals making wisecracks and dancing to the latest hits (in this case more alterna-rock leaning fare such as Green Day, etc.), while the story is typical sentimental mush about the value of family, and saying no to conformity to pursue your bliss. On another level, 'Surf's Up' is quite an ambitious technical achievement -- the first film to marry a "live action camera" with a CGI world, emulating a documentary approach that makes it both retro and cutting-edge.

Personally, I could care less about computer graphics advancements. Yes, the various water effects are astounding -- even jaw-dropping -- but all the special effects in the world don't mean much without a great story, and it is here where 'Surf's Up' offers little that is new. That Cody's tale is told like documentary does give 'Surf's Up' a certain freshness (at least compared to some of the pretty bad CGI movies that have come out recently, such as 'The Ant Bully' or the dreadful 'Happily N'ever After'), but a clever narrative structure can't make up for a completely unoriginal story.

That doesn't mean that 'Surf's Up' isn't enjoyable on its own terms. Cody, as voiced by LeBeouf, is a very likable, quirky hero, and really, how can you not root for a cute penguin on a surf board? I also liked Bridges' curmudgeonly ol' Geek, with the actor so vocally dexterous that he is as much a force to be reckoned with as the soundtrack's many pounding waves. The movie is also filled with lots of genuinely clever one-liners, as well as some more sophisticated humor that it works equally well for adults and children. And to its great credit, unlike so many other recent animated flicks, 'Surf's Up' never condescends to its kid audience.

The story itself may be predictable and uninspired, but I've certainly seen worse than 'Surf's Up.' Cute, well-meaning and technically impressive, this one's not a classic on par with Pixar, but kids will love it and (if you set your own expectations accordingly) there's plenty here for adults, as well. 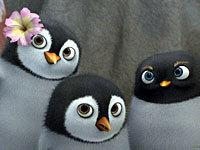 'Surf's Up' takes a rather novel approach for an animated movie, treating its surfing penguins as if they are the subject of a documentary. The filmmakers follow suit stylistically, giving the movie's animation an intentionally "degraded" feel with simulated noise, grain, and other defects. That makes this 1080p/AVC MPEG-4 transfer a tough one to judge, as large portions of the film look flat, desaturated, and full of fake splice marks and the like. The kind of three-dimensional, razor-sharp imagery we've normally come to expect from animated films on high-def just isn't here.

However, 'Surf's Up' does open up quite a bit as the film expands its scope. The more natural looking material can be excellent. Colors come alive, and contrast perks up considerably. Detail here is lush and close to exquisite. There is also some wonderful rendering on display here, particularly the dynamic waves and surf. It can look fantastic -- lush, textured and layered -- providing moments of 'Surf's Up' that really impress. All in all, even the film's degraded visual design certainly works well narratively. Just don't expect consistently stunning video on par with a 'Happy Feet' or a Pixar film.

Sony provides both an uncompressed PCM (48kHz/16-bit) and a Dolby TrueHD 5.1 (48kHz/24-bit) surround track for 'Surf's Up,' and this is one of those cases where the PCM and TrueHD tracks are so close that differences are negligible at best. Whichever mix you choose, this is a lively, engaging presentation that is sure to please.

One of the things I find so much fun about animated film soundtracks is that they are usually created entirely in the studio. As such, they are not as bound by the "rules" of reality. 'Surf's Up' is no exception, boasting highly active surrounds throughout. The sound of crashing waves is so prominent in the sound design that it’s almost as if they’re a character in the film. Likewise, the sense of reality and depth to discrete effects is terrific, with nicely transparent pans and an overall heft to the rears that is very involving.

Dynamic range is pitch perfect across the entire spectrum, and the subwoofer really surprised me with its deep, tight bass. Dialogue was expertly recorded as well, with the voices always loud and clear. 'Surf's Up' also makes strong use of its alternative-leaning rock songs (Green Day, etc.), and the music sounds great (if still largely stereo). Simply put, the audio here is absolutely first-rate.

Sony is bringing 'Surf's Up' to Blu-ray day-and-date with the DVD, and both are crammed to the gills with supplements. Though there is nothing exclusive to the high-def version, nearly all of the video-based extras are presented here in full 1080p/AVC MPEG-4/MPEG-2 video.

Typical of animated family titles, the goodies are a mix of kid-friendly fare and more insightful material for older fans. Kicking things off is a suite of four featurettes. "All Together Now: 'Surf's Up' Voice Sessions" (17 minutes) was a personal fave. Extensive split-screen footage shows all of the main actors (including Shia LeBeouf, Jon Heder, and Jeff Bridges) conceptualizing and refining their characters. There are also interviews with most of the cast plus co-directors Ash Brannon and Chris Buck. Though I've seen a good number of these voice cast featurettes on other discs, I always find the process fascinating.

"Not a Single Drop of Real Water" is a more standard 28-minute overview divided into three parts: "Surf Cam," "Making Waves," and "Storyboard to Surfboard." It's a compact but diverse summation, with plenty of filmmaker and cast interviews, making-of footage inside the animation house, and an interesting video diary documenting how production personnel took a few surfing field trips to ensure authenticity of the film's milieu. Rising above the merely promotional to offer a genuine snapshot of the creative process, this one is well worth watching.

"Meet the Penguins" introduces us to the real-life penguins of 'Surf's Up,' those unsung heroes who had their bodies studied, poked and prodded so the animators could render their likenesses on-screen. This is quite cute though I found it a bit too short at only 4 minutes. The only featurette that's totally lame is "Arnold's Zurfinary" (6 minutes), which is just some bratty kid reciting from a dictionary of the "hip" surf slang used in the movie.

More for the adults is the screen-specific audio commentary that features directors Chris Buck and Ash Brannon and producer Chris Jenkins. Unfortunately, it is a bit slow-going and dry, but at least it's accessible for the casual fan. Buck and Brannon delve into the CGI techniques to a technical extent, but we also get an equal helping of story and character. Perhaps intentionally, no real mention is made of the fact that 'Surf's Up' came pretty late in the cycle of penguin movies, especially 'Happy Feet.’ Instead, Buck and Brannon keep referring to 'Surf's Up' purely as a "surf movie that just happens to be animated." Uh-huh. (Note there is also a second, bonus commentary on this Blu-ray -- see the "HD Exclusives" section below for more on that one.)

Next, we have a nice assortment of deleted footage and other unseen material. There is a quartet of Lost Scenes running about 9 minutes. The first three are in storyboard form only, while the last is basically an audio improv session. There is also a 6-minute montage of "Progression Reels" with commentary by the visual effects team, featuring about a half-dozen scenes in various stages of rendering, from rough animatics to finished product.

Other bonuses include a music video by Lauryn Hill for the tune "Lose Myself" (this is the only extra that’s presented in 480i/MPEG-2 video only). The "Image Galleries" contain two collections: "Characters" (16 stills) and "Locations" (28 stills). Thankfully, Sony provided both automated and manual controls, so you can watch each gallery as slideshow or click through them image-by-image at your leisure. The "Surf's Up Pinball Game" replicates an old-fashioned upright pinball machine fairly well, although there is enough of a lag between pushing the remote and activating the flippers that I found the game more frustrating than fun.

Finally, the two included animated shorts, "Chubbchubbs" (which won the 2002 Oscar for Best Animated Short Film) and its sequel "Chubbchubbs Save Xmas" are a hoot. Since it is so rare for most of us to get a chance to see Oscar-winning shorts (let alone in HD video), this is an especially welcome addition.

Rounding out the set are theatrical trailers for 'RV,' 'Monster House,' 'Open Season' and a teaser for 'Open Season 2,' which isn't even due in theaters until 2008. Sadly, there is no trailer for 'Surf's Up.'

Arriving a wee bit late to the penguin party, 'Surf's Up' is a cute little animated movie, but despite its unique "mockumentary" approach and use of alternative rock songs (this ain't Disney) a thin narrative prevents this one from totally knocking it out of the park. This Blu-ray release is quite solid, however. The image is a hampered at times by the intentionally-degraded video quality, but the soundtrack and extras are consistently strong. It's not the greatest animated flick you'll see, but 'Surf's Up' is still worth the ride on Blu-ray.

Sale Price 6.99
List Price 9.99
Buy Now
3rd Party 1.35
In Stock.
See what people are saying about this story or others
See Comments in Forum
Previous Next
Pre-Orders
Tomorrow's latest releases