Overview - 86-year-old Irving Zisman is on a journey across America with one of the most unlikely companions, his 8 year-old grandson Billy in "Jackass Presents: Bad Grandpa". Irving Zisman (Johnny Knoxville) and Billy (Jackson Nicoll) will take movie audiences along for the most insane hidden camera road trip ever captured on camera. Along the way Irving will introduce the young and impressionable Billy to people, places and situations that give new meaning to the term childrearing. The duo will encounter child beauty pageant contestants (and their mothers), funeral home mourners, biker bar patrons and a whole lot of unsuspecting citizens. Real people in unreal situations, making for one really messed up comedy.
OVERALL
Recommended for Fans 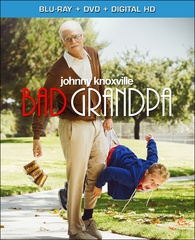 Fans, ‘Jackass’ is back! Well, sort of. Johnny Knoxville has reteamed with his 'Jackass' crew, including director Jeff Tremaine, to make a new movie centered on his character Irving Zisman, an elderly man who steals, curses, and fools real people into thinking that he’s harmed himself by doing a variety of stunts and gags. Also, he likes to show off his 12-inch sagging scrotum to anyone who walks by. Mixing in a narrative story with real pranks on real people, ‘Bad Grandpa’ is like ‘Borat’ with the ‘Jackass’ brand. And man, does it work. I haven’t laughed so hard in a movie in a long time.

If you’ve seen any of the ‘Jackass’ movies, you should know that the Irving character is raunchy, vulgar, and not above putting himself in harm’s way. The narrative story here features a kid named Billy (Jackson Nicoll) whose mother is about to start a prison sentence for drugs and other felonies. She gives the kid to her father Irving (Knoxville) in the middle of the funeral ceremony for his recently deceased wife. She tells him to drive Billy across country to be with his father. Needless to say, Billy’s father is no prized human either. He sells drugs and stolen electronics.

Billy and Irving embark on a long road trip with many misadventures along the way. The movie is mostly shot with hidden HD cameras, as Knoxville captures real people and their real reactions to his gags, which are often very funny. From Irving getting his schlong stuck inside a vending machine to Billy posing as a girl in a toddler beauty pageant, all of the pranks had me laughing ’til I cried. Yet there’s less of a gross-out factor than the other ‘Jackass’ movies. Instead, we get comically awkward moments with real people at their jobs, such as Irving trying to overnight Billy in a package at the post office.

What works here is the chemistry between Knoxville and Nicoll. The boy is far advanced from his actual age, and can keep up with Knoxville’s antics and improvisations. He’s a cute kid and is genuinely funny throughout. As for Knoxville, he amps up his Irving character to 11 and never holds back. Although I wasn’t too sure about making a whole movie about this character, I was pleasantly surprised at how funny it turned out.

'Jackass Presentes: Bad Grandpa' comes with a 1080p HD transfer presented in 1.78:1 aspect ratio. Like most of the other 'Jackass' movies, this one was filmed with a variety of cameras and equipment, usually hidden cams and security footage. Thus the image quality is far from top notch. However, the narrative portion of the film looks better than the rest, which is clearer and provides more depth and well defined closeups of the actor's faces. Specifically Knoxville as Irving reveals all of his wrinkles and age spots very well.

The makeup in this film is fantastic and it is shown during the "directed" scenes flawlessly. But in the hidden cam scenes, the picture goes soft and often blurry at times, almost as if you were watching an old VHS copy. The colors seem to pop off the screen during the narrative scenes but seem to be muted otherwise. 'Jackass' is not known for having a high-end quality video image, and nothing is different here. It's the performances and laughs that count here.

This release comes with a lossless DTS-HD 5.1 audio mix and gets the job done. Again, since there are tons of hidden camera shots here, the audio doesn't sound like a big action movie, nor a comedy either. That being said, the dialogue is always easy to understand and comes across clear. There isn't any directionality here and the highs and lows aren't anything to write home about either.

There are a few music selections, which turn the volume up and has a fuller sound, but it doesn't happen often. There are no pops, cracks, or hissing here, which is good, but don't expect a big full sound. 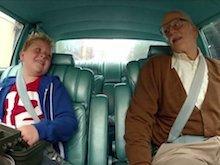 'Jackass Presentes: Bad Grandpa' is one hell of a funny movie. You'll be laughing from start to finish without a moment to breathe in between. The makeup is top notch and completely deserves the Oscar nomination it received recently. I hope it wins. There is a lot to like about this movie, while the video and audio presentations aren't part of that, the characters and jokes will make you fall in love with this film and want more. There are some decent extras on this release too. Recommended for fans.

Sale Price 10.68
Buy Now
3rd Party 15.9
In Stock.
See what people are saying about this story or others
See Comments in Forum
Previous Next
Pre-Orders
Tomorrow's latest releases