Though it's not as sunny as its title might suggest, Blue Skies reunites Bing Crosby and Fred Astaire in a meandering musical that features more than a dozen Irving Berlin tunes. The story of a hoofer and nightclub owner who vie for the same girl (Joan Caulfield) entertains in fits and starts, but can't come close to recapturing the magic of Crosby and Astaire's previous outing, Holiday Inn. A brand-new 2K master showcases the sumptuous Technicolor photography, while newly remastered audio allows Berlin's wonderful array of songs to shine. Blue Skies may not rank as one of Hollywood's greatest musicals, but if you love Crosby and Astaire, it's definitely worth checking out. For Fans Only.

Everybody loves the Yuletide-themed musical Holiday Inn, but only the most rabid Golden Age movie mavens know Paramount reunited Bing Crosby and Fred Astaire four years later for a follow-up film that also boasts an Irving Berlin score. Blue Skies captivated the public and became one of the top-grossing movies of 1946, but the years haven't been kind to this lightweight yet surprisingly dark musical. Whereas Holiday Inn is timeless, Blue Skies is very much of its time, and as a result, it has faded from view over the past several decades.

A jukebox musical before the term had ever been coined, Blue Skies wraps more than a dozen disparate Berlin tunes around a flimsy story about a couple of song-and-dance men who both love the same girl. If you think that sounds a lot like Holiday Inn, you're right. Crosby also sings half a chorus of "White Christmas" toward the end of Blue Skies, but the similarities between the two films end there. Blue Skies lacks the energy, wit, and much of the charm of its predecessor, and because of an untimely tragedy, its director as well. Mark Sandrich, who helmed Holiday Inn (and five Astaire-Rogers pictures) and undoubtedly would have injected more vim and vigor into Blue Skies, prepped the film, but sadly died of a heart attack at age 44 shortly before shooting began. Stuart Heisler, who had never before directed a musical (and never did again), replaced him, and though he does a competent job, Blue Skies never captivates like it should. 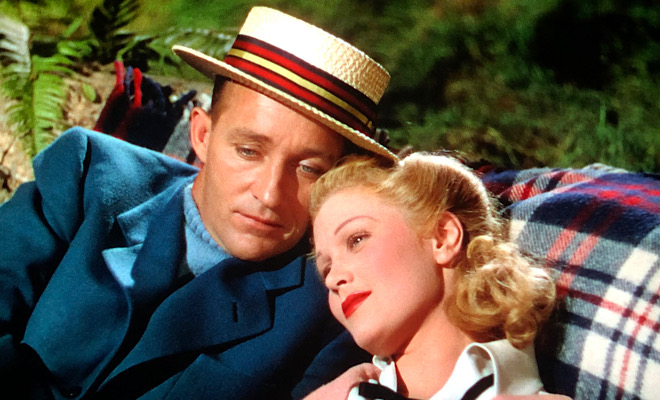 Most of the blame goes to the story, which according to the credits is based on "an idea by Irving Berlin." (I think Berlin's idea was to build a movie around his song catalogue!) Told in flashback, it chronicles the multi-year love triangle between ex-Vaudeville partners Jed Potter (Astaire) and Johnny Adams (Crosby) and chorus girl Mary O'Hara (Joan Caulfield). Mary catches the eye of Jed, a suave Broadway hoofer, while working with him in a show, but once she meets his buddy Johnny, who now runs a New York nightclub, she's instantly smitten.

Jed not-so-quietly pines for Mary, who rejects his frequent proposals and pursues the commitment-phobic Johnny instead, despite his admission that he's "not the marrying kind." Johnny can't even remain faithful to his nightclubs, which he buys and sells without rhyme or reason, let alone a woman, but Mary finally gets him to marry her. Jed begrudgingly accepts their union, but storm clouds quickly gather, leading to unhappiness for all. "Nothing but blue skies from now on"? Not really.

Though the downbeat story reflects the jaded attitude of post-World War II America, there's not enough plot to sustain it, and the cardboard characters struggle to connect not only with each other, but also the audience. Unlike Holiday Inn, we don't really care who gets the girl in the end, and that's largely because the girl isn't very interesting. Caulfield may be pretty, but she doesn't sing (her vocals are dubbed), can barely dance (Astaire was so exasperated with her lack of talent during rehearsals he sought to have her replaced), and lacks the passion and magnetism to merit her central role in a love triangle. 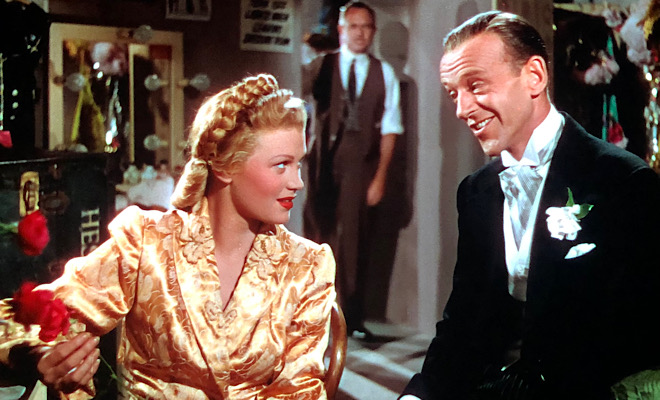 That leaves Berlin to pick up the slack, and although Blue Skies contains some classic standards by the legendary songsmith, including "A Pretty Girl Is Like a Melody," "How Deep Is the Ocean?," "Puttin' on the Ritz," "All by Myself," "Always," "Heat Wave," the iconic title tune, and "You Keep Coming Back Like a Song" (a new composition that earned an Oscar nod for Best Song), the staging - with one notable exception - leaves a lot to be desired. ("A Pretty Girl..." was done to perfection in 1936's The Great Ziegfeld and "Heat Wave" would get the scorching treatment it so richly deserved eight years later, care of a voluptuous Marilyn Monroe in another Berlin jukebox musical, There's No Business Like Show Business.) Some of the numbers in Blue Skies are sprightly enough and they all look luscious in three-strip Technicolor, but pizzazz and elegance come at a premium.

The one exception is "Puttin' on the Ritz," a dynamite Astaire solo that mixes impeccable grace and masterful execution with technical innovation. What's better than one Fred Astaire? How about 10! And that's just what we get, thanks to (almost) seamless optical effects that allow the screen's premier dancer to share the screen with nine clones. It's a thrilling routine that reportedly required five weeks of backbreaking rehearsal to meet Astaire's rigorous standards. At the time, many thought the virtuoso number would be his last, as Astaire announced his retirement from the screen shortly before Blue Skies was released. Lucky for us, a year or so later he was coaxed back to work after Gene Kelly broke his ankle while prepping for Easter Parade. Astaire replaced him and kept plying his trade for another 30-plus years. 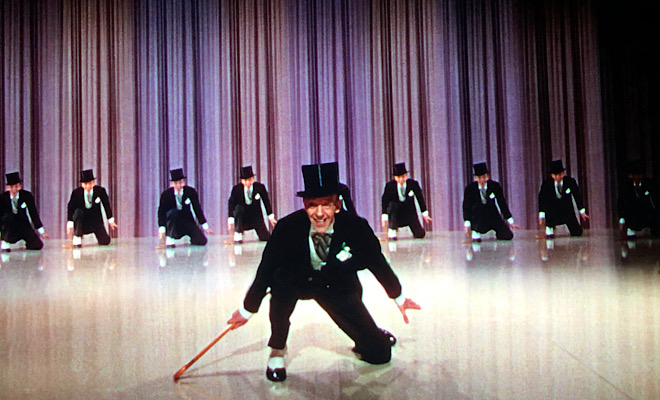 Billy De Wolfe supplies some comic relief as Crosby's loyal sidekick (although a lengthy piece of shtick toward the end of the film is painfully tedious); Olga San Juan - a.k.a. the "Puerto Rican Pepperpot" - delivers some spicy vocals; and a few months before she would make a memorable splash as little Zuzu in the Christmas classic It's a Wonderful Life, five-year-old Karolyn Grimes tugs the heartstrings as Crosby's daughter in a sentimental scene.

Despite several bright spots, Blue Skies is pretty gray. It can't shake comparisons to the far-better Holiday Inn and never rises to the level of more renowned Astaire and Crosby musicals. The dreary, hard-to-swallow story, mediocre numbers, and head-scratching ending provoke a feeling of ennui that only "Puttin' on the Ritz" can briefly alleviate. Astaire and Crosby fans will welcome this forgotten film's Blu-ray release, but even diehard musical buffs must grudgingly admit Blue Skies is not their finest hour. 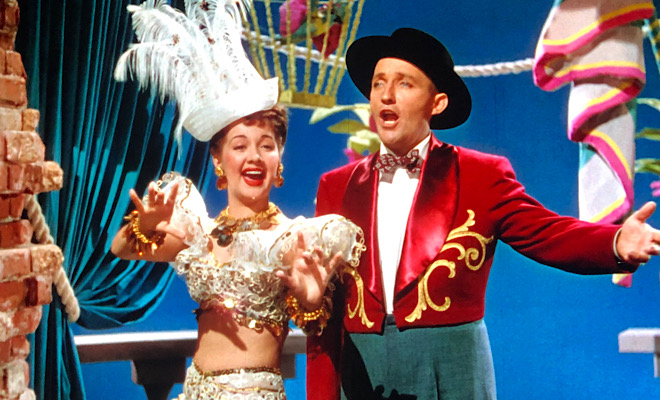 Vital Disc Stats: The Blu-ray
Blue Skies arrives on Blu-ray packaged in a standard case. Video codec is 1080p/AVC MPEG-4 and audio is DTS-HD Maser Audio 2.0 mono. Once the disc is inserted into the player, the static menu with Bing Crosby warbling the title tune immediately pops up; no previews or promos precede it.

A brand new 2K master yields a glorious 1080p/AVC MPEG-4 transfer that maximizes the impact of the lush Technicolor cinematography of Charles Lang and William Snyder. Superior clarity and contrast combine with beautifully resolved grain to create a vibrant, well-balanced, very film-like picture. The deep blacks of Astaire's trademark top hat and tails and bright, wispy whites of Caulfield's fur outfit grab attention, but it's those sumptuous Technicolor hues that make the visuals of this musical sing. The bold reds of lipstick, a blazing neon sign, and huge bouquet of roses; the subtle variations of green, from the pale tone of Olga San Juan's gown and matching boa to Billy De Wolfe's Irish-green hat; and an array of pastels, from Crosby's powder blue suit to various pinks and lavenders...all of them are perfectly timed so they never look garish or artificial. Several scenes are intentionally dark and even a tad murky, but excellent shadow delineation keeps the picture well defined. Flesh tones remain natural and stable throughout, sharp close-ups flatter all the players, and only a few errant nicks and marks dot the pristine source material. Kino has done a wonderful job revitalizing this 75-year-old classic, and fans of the film will be delighted by this top-notch presentation.

The newly remastered DTS-HD Master Audio 2.0 mono track supplies clear, well-modulated sound. Excellent fidelity and tonal depth add luster to the songs and orchestrations (Robert Emmett Dolan's score earned an Oscar nomination), and a wide dynamic scale handles all of their highs and lows without a hint of distortion. (Crosby's mellifluous baritone sounds especially warm and rich.) A few ambient effects, such as chirping birds and applause, augment the track, all the dialogue and song lyrics are easy to comprehend, and no age-related hiss, pops, or crackle intrude. At times, a hollow quality afflicts isolated portions of the track, and for some reason Astaire's taps are quite muted, lacking the crispness that adds syncopated rhythm to his dances. That's especially disappointing - and a bit distracting - but it's the only real stain on an otherwise spotless track.

Update, 3/31/2022: Kino Lorber Studio Classics announced today that an "audio error" is responsible for the lackluster taps during Astaire's solo dances. Replacement discs that fix the problem are being readied, but it will take 45-60 days to re-author, test, replicate, and send them to consumers. If you ordered your Blue Skies disc directly from Kino Lorber, the replacement disc will automatically be sent to your shipping address on file. If you ordered your disc from another retailer, fill out a replacement request form at https://www.kinolorber.com/page/blue-skies-replacement-program?fbclid=IwAR2sM-zjLrOoQA46BkVm8limuKIff-8CTVV-Qzq5qGYMshds7M5Kd1zN45s.

In addition to a quartet of trailers for other Kino musical releases (sadly, no preview for Blue Skies is included), the only extra is a lively and informative audio commentary by film critic and author Simon Abrams.

Blue Skies tries to recapture the magic of Holiday Inn, but this Technicolor follow-up lacks the style, charm, energy, and artistry of its black-and-white counterpart. Bing Crosby and Fred Astaire try their best to breathe some life into the second-rate story, but even their admirable efforts and a bunch of Irving Berlin standards can't salvage this surprisingly dull musical. A beautiful, brand-new 2K remaster and solid audio pump up the disc's appeal, but only true-blue Crosby and Astaire aficionados will want to add Blue Skies to their collection. For Fans Only.