The Apartment is sheer bliss from start to finish, but sadly, Kino's Blu-ray presentation features a subpar video transfer that dulls some of the luster of this luminous comedy-drama. A pitch-perfect script about a hapless corporate ladder-climber who pines for the pert yet damaged elevator operator in his office building tackles a number of potent themes and is distinguished by masterful direction and impeccable performances, all of which combine to create one of the most deserving Best Picture winners in Hollywood history. It's just a shame the video quality of the Blu-ray can't rival the pristine appearance of Kino's breathtaking 4K UHD edition or previous Blu-ray releases of The Apartment. Skip It.

[Excerpt from our The Apartment - 4K Ultra HD Blu-ray Review]
"The transformation of a schnook into a mensch. In a nutshell, that's The Apartment, and in the hands of director Billy Wilder and his writing partner I.A.L. Diamond, it's one of the most rewarding and entertaining journeys in Hollywood history. A biting satire with a heart of solid gold, this Best Picture Oscar winner skewers corporate ladder-climbing, office and sexual politics, philandering executives, and sycophantic schmoozing all while exploring love's wrenching vagaries. The film may be six decades old, but the emotions it engenders and themes it explores remain both timeless and universal. Wilder made many iconic movies over the course of his 40-year directing career - Double Indemnity, The Lost Weekend, Sunset Boulevard, Witness for the Prosecution, Some Like It Hot, One, Two, Three - but The Apartment is without a doubt his crowning achievement.

The culmination of years of dabbling in different styles, The Apartment ties together all of Wilder's immense and varied talents - his lyrical, rhythmic writing style that mixes hilarious quips with innate truisms; his keen eye that economically captures the essence of an idea or emotion; his uncanny ability to make stereotypical characters unique; and most of all, his passion for depicting the multiple and endlessly fascinating facets of the human condition. Along with Some Like It Hot, The Apartment is also a prime example of how a rich, textured narrative can be built upon the simplest premise.

Some Like It Hot, though, is rooted in a single genre. What makes The Apartment even more impressive is Wilder's deft intertwining of comedy and drama, a deceptively tough task that's accomplished with such dexterity and grace, the shifts in tone feel utterly natural. Romantic, funny, and sweet one minute, cynical and searing the next, the film captures the elusive ebb and flow of life and its rollercoaster ups and downs while tapping a gamut of conflicting emotions." 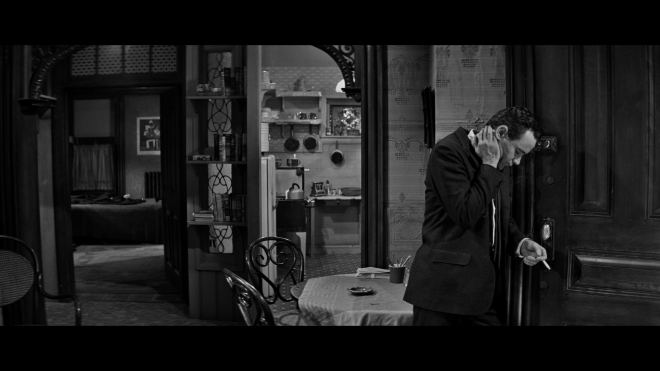 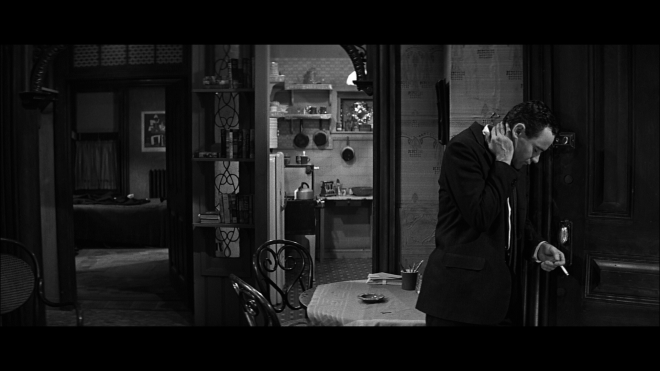 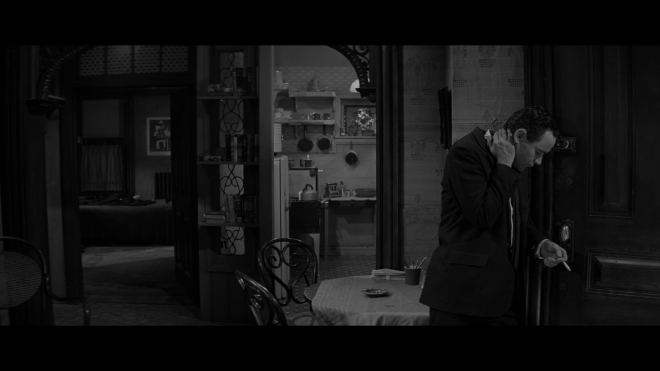 Vital Disc Stats: The Blu-ray
The Kino edition of The Apartment arrives on Blu-ray packaged in a standard case. Video codec is 1080p/AVC MPEG-4 and default audio is DTS-HD Master Audio 5.1. (A DTS-HD Master Audio 2.0 mono track is also included.) Once the disc is inserted into the player, the static menu with music immediately pops up; no previews or promos precede it. 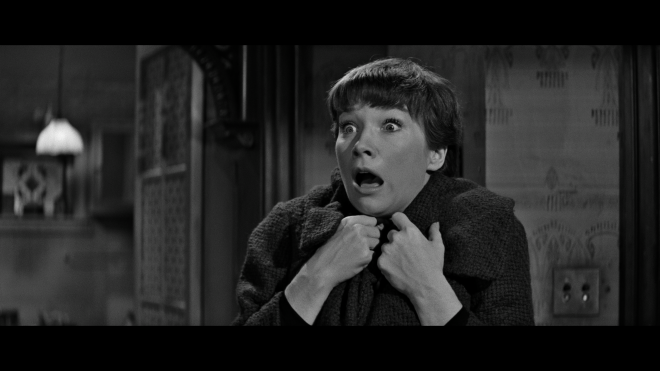 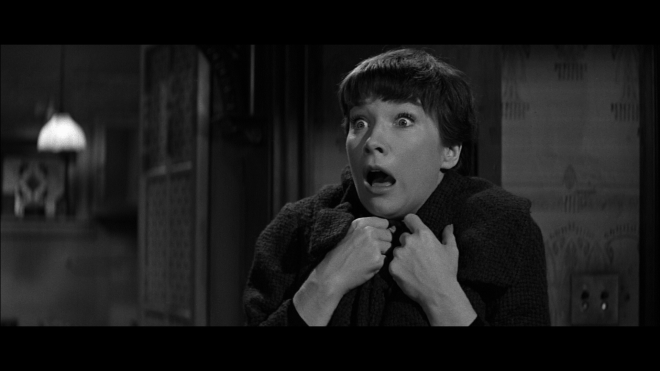 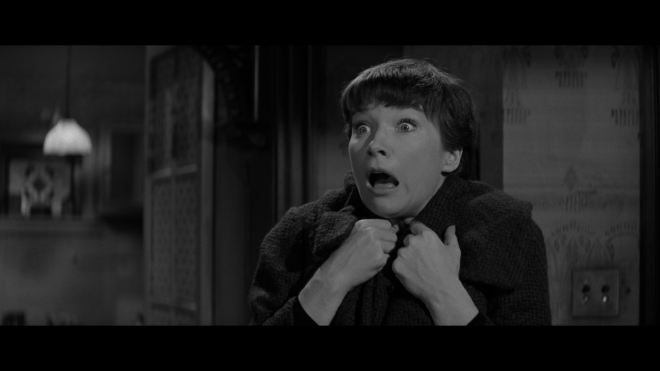 After viewing Kino's dazzling 4K UHD transfer of The Apartment, I naturally assumed the 1080p Blu-ray rendering would be drawn from the same source, but that is definitely not the case. There's a night-and-day difference between the Ultra HD transfer and this 1080p/AVC MPEG-4 effort, which has been struck from a far inferior source. Though I don't own MGM's 2012 Blu-ray, I figured Kino must have recycled it for this release, but after reading HDD's very positive assessment of it in the site's review a decade ago, it's clear this is a different transfer altogether. (It also doesn't remotely resemble Arrow Films' terrific 2017 restoration.) So color me baffled.

Source mystery aside, this is a very disappointing transfer. Print damage is prevalent throughout, with plenty of specks, blotches, and other signs of wear consistently marring the picture. Because the image is much darker than the 4K UHD version, shadow delineation is weaker and crush creeps in more often. Grain is more evident, too, and there's far less clarity. Even if I hadn't seen the 4K UHD transfer, the deficiencies here are so glaring I'm sure my reaction would be the same. I own the 2017 Arrow Films Blu-ray edition, and that restoration is far superior to this transfer. Judging from HDD's review of MGM's 2012 Blu-ray, I would guess the same would be true of that disc, but I can't vouch for it personally. 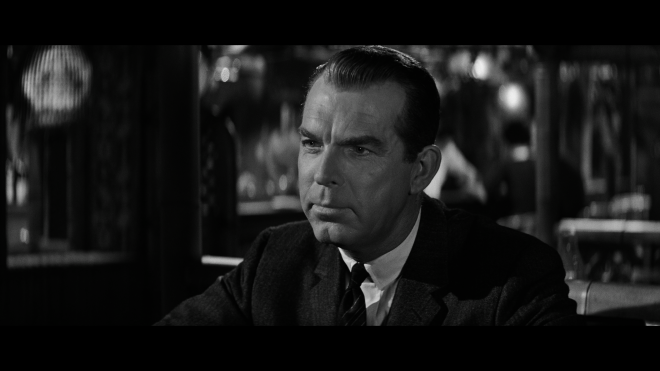 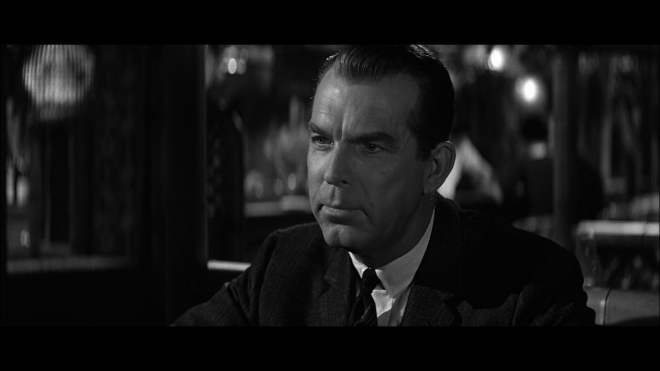 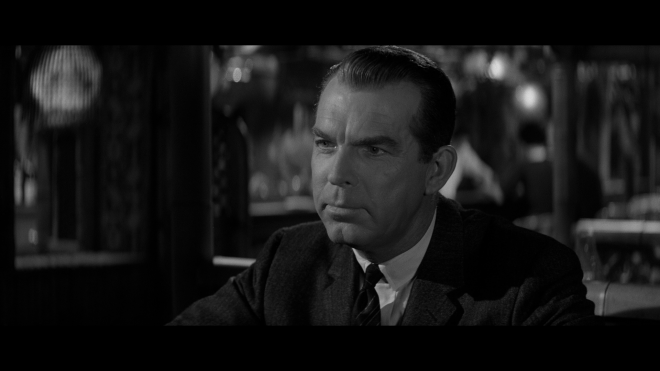 The Apartment is such a fantastic film, it's really a shame to see it presented in such a slapdash manner. Is this transfer unwatchable? No, but if you truly care about picture quality (and if you're reading this video review right now, it's pretty clear that you do), the deficiencies are definitely both distracting and annoying. I can accept such shortcomings in obscure films that have limited appeal, but not in a Best Picture Oscar winner. Though the underlying image here is well-defined, the same care that went into producing the 4K UHD transfer is absent. Films are remastered in 4K all the time and released in 1080p, so why couldn't Kino do that in this instance? There might be a good explanation, and if there is, I'd be interested in hearing it. 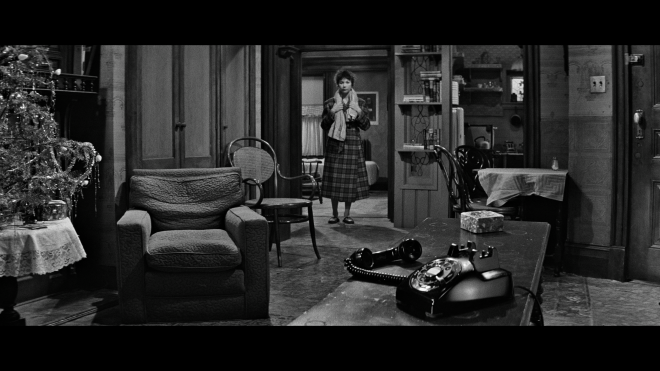 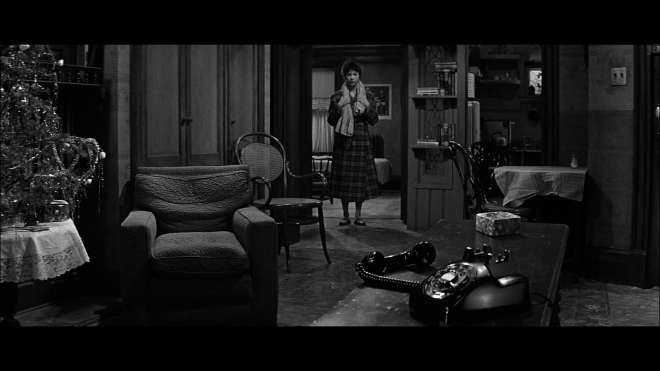 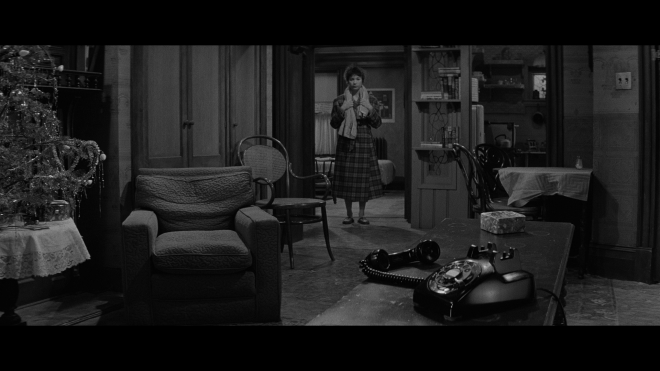 This edition of The Apartment contains both the original mono track, presented in DTS-HD Master Audio 2.0 (the same track appeared on the 2017 Arrow Video Blu-ray release, albeit in LPCM mono), and a remixed DTS-HD Master Audio 5.1 track that debuted on the 2012 MGM Blu-ray. The mono track supplies clear, well-modulated sound that exhibits excellent fidelity and tonal depth. For optimal listening, I needed to raise my customary volume level, but despite the increase, no distortion crept into the mix. The lush, romantic music score sounds especially good and fills the room with ease, and all the priceless dialogue is well prioritized and easy to comprehend. Sonic accents like popping champagne corks, slaps, and the sound effects from the old western films playing on Baxter's TV are distinct, and subtle atmospherics like the New York cityscape and constant din of the cavernous office space nicely shade the action. No age-related hiss, pops, or crackle intrude either. If you're a purist and enjoy pairing classic films with their original audio tracks, you'll be delighted by this one.

Here's what my former HDD colleague Steven Cohen had to say in 2012 about the DTS-HD MA 5.1 track:
"Resisting the urge to spruce up the original mono elements too much, this is a respectful remix that does the film justice. Dialogue is clear and full throughout with no signs of crackle or hiss. The soundstage remains faithful to the movie's mono roots but has been opened up slightly in subtle but effective ways. Speech and other effects are occasionally spread out directionally when appropriate, and soft echoes of music and ambient sounds hit the rear speakers. The wonderful score comes through with nice fidelity demonstrating pleasing range with no distortion. Low end activity is minimal, but for a movie of this type that is to be expected. Balance between all of the audio elements is handled well. While I usually prefer for mono films to retain their original track, this 5.1 remix is so subtle and unobtrusive that I didn't mind it at all. With no major signs of age or distortion, this is a very solid track." 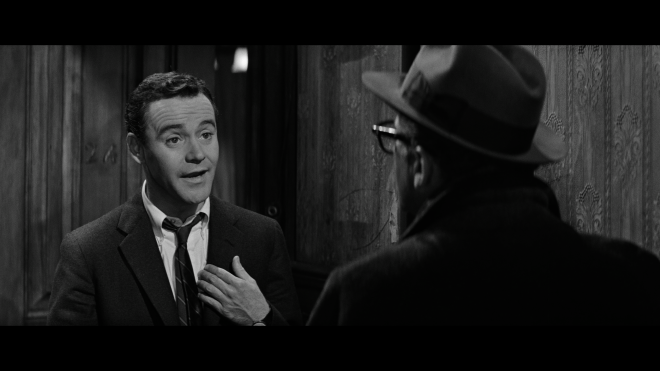 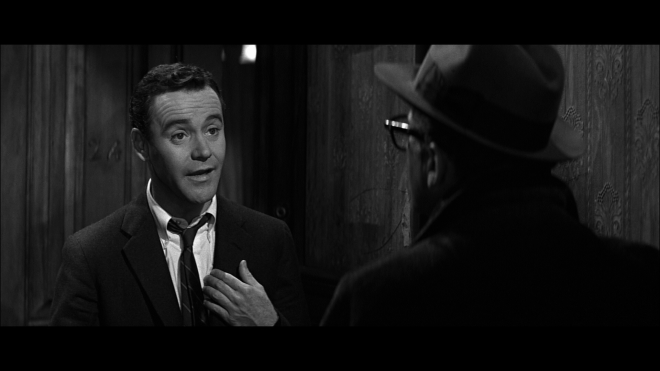 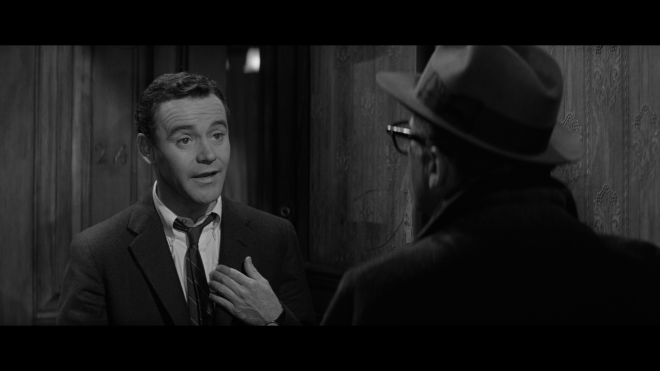 In addition to all the extras from the 2012 MGM Blu-ray (for a review of those supplements, click here), Kino adds a brand new audio commentary by Wilder biographer Joseph McBride. This is an absolutely fantastic track that's required listening for anyone who appreciates both Wilder's work in general and The Apartment in particular. Intelligent, insightful, informative, and presented in an easygoing, conversational manner, McBride's absorbing discussion covers a multitude of topics, including the story's social and cultural origins, other films that influenced The Apartment, the screenplay's structure, and the edgy nature of many Wilder films and his penchant for tackling touchy subjects. He also analyzes the characters and situations, examines the music score, looks at the difference between Wilder's partnerships with Charles Brackett and I.A.L. Diamond, talks about the importance of being a mensch in Wilder movies, and notes Wilder was the first man to win Best Picture, Best Director, and Best Screenplay Oscars for the same film. This is one of the few commentaries I've listened to that made me wish it could continue after the movie ends. It's that good. (McBride also supplied a stellar commentary for Kino's recent 4K UHD edition of Wilder's Some Like It Hot.) The original theatrical trailer for The Apartment is also included, as well as several previews for other Wilder films.

All of these extras, with the exception of the new commentary track, also appear on Arrow Film's 2017 Blu-ray release. That edition contains a wealth of exclusive material as well, so by all means hang on to your Arrow Films copy of The Apartment, if you own it. 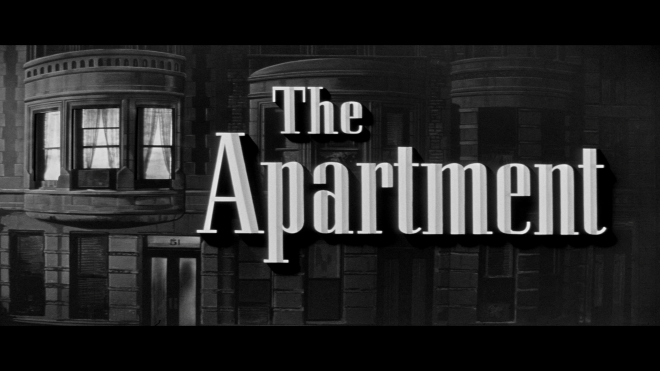 A subpar video transfer sabotages Kino's Blu-ray edition of The Apartment. Writer-director Billy Wilder's masterpiece is a pleasure to watch in any form, but too much print damage dampens the joy and tempers the heartbreak of this sublime comedy-drama. Solid audio and a nice array of extras - including a terrific new commentary track - enhance the disc, but the video quality of previous releases outclasses the disappointing rendering here. Though Kino's 4K UHD edition of The Apartment nabs a must-own rating, this Blu-ray version just doesn't measure up. Skip It.