The only Best Picture Oscar winner since 1956 yet to receive a Blu-ray release finally gets one, and it's worth the wait. Ordinary People may not have deserved the Academy's top prize in 1980, but director Robert Redford's inaugural film stands as a searing portrait of a dysfunctional family mired in the messy aftermath of a life-altering tragedy. A terrific, brand-new 4K transfer, vibrant audio, and a couple of new supplements distinguish this latest installment in the Paramount Presents series. Packed with emotion, Ordinary People explores family and marital dynamics with insight and honesty, and comes very Highly Recommended.

A family tragedy can rip even the closest-knit clan to shreds. As grief consumes the soul, such turbulent emotions as guilt, blame, anger, and denial bubble to the surface and chip away at rock-solid relationships. Few films tackle this touchy subject in a forthright, relatable manner, but Ordinary People, director Robert Redford's adaptation of Judith Guest's acclaimed novel, does just that. More than 40 years may have passed since this powerful, somewhat sentimental drama premiered, but the film remains remarkably vital and relevant, and all the first-rate performances still ring painfully true.

I first saw Ordinary People at the tender age of 18 during its initial 1980 release. Back then, I identified closely with the character of Conrad Jarrett (Timothy Hutton), a troubled, insecure high school senior who struggles to get over the recent death of his older brother Buck, the family golden boy who lost his life when the boat he and Conrad were sailing capsized during a storm. Conrad survived the incident, but guilt so overwhelmed him, he attempted suicide, and as the movie opens, he's back at home and school after an extended stay at a psychiatric hospital.

His caring father Calvin (Donald Sutherland) convinces Conrad to see Dr. Berger (Judd Hirsch), a local therapist, to help him deal with his depression and anxiety. Conrad appreciates his dad's concern, but his relationship with his reserved mother Beth (Mary Tyler Moore) remains distant and strained. The two can't connect, despite Calvin's constant efforts to bridge the gaping chasm between them, and as Conrad's sessions with Dr. Berger intensify, so do the agonizing Jarrett family tensions, which reach their breaking point over the Christmas holidays. 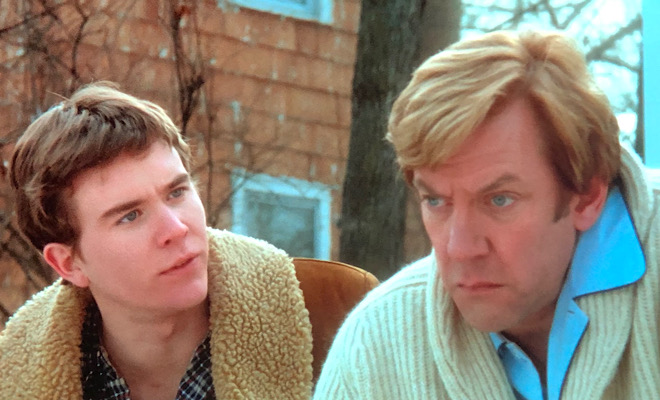 Since that initial viewing four decades ago, I revisited Ordinary People a couple of times during the 1980s, but hadn't seen it since. I worried I might find the film overly precious and a bit trite 30-odd years later, but much to my surprise, it still hits home and strikes almost all the right notes. Of course, now that I'm married and have (grown) kids of my own, I closely relate to Calvin (watching him was almost like looking in the mirror), but I also feel much more empathy for Beth, a complex, misunderstood woman who makes some wise - if brutal - observations throughout the movie. Unfairly labeled a cold, heartless bitch when Ordinary People first came out, Beth is just as damaged and riddled with pain as Conrad and Calvin, but chooses to repress, even bury her emotions because she can't betray the image of perfection she's so carefully cultivated throughout her life. Beth may be unlikeable - at times even abhorrent - but in many ways, she's the most tragic character of all.

Redford masterfully juxtaposes the bucolic, seemingly idyllic locale of Chicago's North Shore with an unhappy family that's beholden to the area's stringent social codes and abides by the impossible-to-maintain pretense that everything is always fine. The Jarrett household is a fragile, brittle environment where everything is always in its proper place and life progresses along a carefully constructed track from which no deviance is tolerated. Rolled cloth napkins in silver rings reflect the tightly wound personalities and quiet meals in the formal dining room every night accentuate the stiffness. This is a world where a broken china plate is caressed and coddled and cared for like an injured child, where appearances mean everything, and a slight lift of the veil, slip of the tongue, or careless misstep cause a magnitude 8.0 earthquake. Perfection is not an aspiration in the Jarrett home; it's an expectation, a requirement. Anything less is failure. 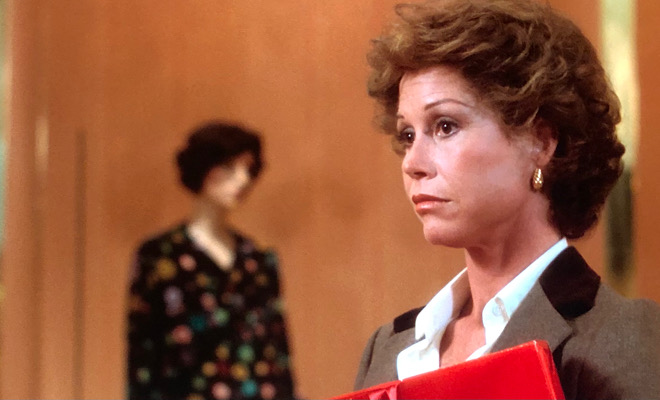 The film is called Ordinary People, but are the Jarretts really "ordinary"? Are they a "typical" American family? Even by the rarefied standards of über-affluent Lake Shore, Illinois, they're a couple of ladder rungs above the town's regular joes. The strife they endure is certainly familiar and cuts across many economic levels, but it's hard to watch the movie without feeling as if it's trying to impress upon us the notion that rich people have problems, too, and despite their wealth and privilege they're really just like the rest of us. In that manner, Ordinary People is just as snooty, judgmental, and out of touch as its smug characters. The Jarretts may be ordinary within their tiny subsection of American society - they were one-percenters before the term was ever coined - but not in the grand scheme of American life.

There's also a shocking lack of diversity in Ordinary People that might have escaped notice back in 1980, but sticks out like a sore thumb in 2022. Lake Forest is still 87% white today, so it's a fair bet the percentage was a good deal higher 42 years ago, but that doesn't excuse the glaring absence of minorities in the movie. Forget speaking parts; people of color aren't even cast as extras. Not in the school Conrad attends, not in the restaurants the Jarretts patronize, not in the suburban mall where Beth buys Christmas gifts, and most surprising of all, not on a downtown Chicago street. No African-Americans, no Asians, no Latinos. When it struck me just how white Ordinary People is, I went back and closely scanned the movie looking for black faces. I could only find one in the entire movie...a female McDonald's cashier who's in the very back of a quick panning shot and mostly obscured by other actors. Ordinary People? Once again, the title is a misnomer. 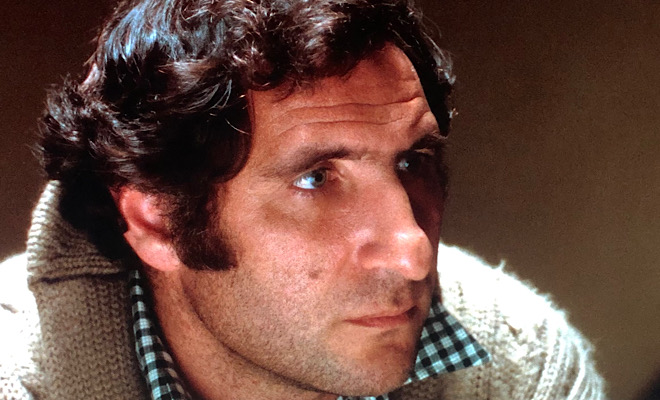 All that said, the film is still a top-flight drama, and it's the performances and Alvin Sargent's lyrical, Oscar-winning adaptation that make it so absorbing. Hutton, in his very first film, deservedly won the Best Supporting Actor Oscar for a deeply affecting portrayal that never feels forced, while Sutherland, in a more subdued role, quietly conveys Calvin's growing inner turmoil. Hirsch also nabbed a worthy Oscar nod as the frank, rumpled, down-to-earth Dr. Berger, a refreshing change from the reserved, scholarly, often cryptic psychologists Hollywood favored in the past. In other roles, Elizabeth McGovern (also making her film debut) shines as Conrad's teen crush; Dinah Manoff tugs the heartstrings as Conrad's equally troubled friend; and M. Emmet Walsh impresses in a brief bit as Conrad's macho, insensitive swim coach.

Moore, however, steals the spotlight - and stole all the notices at the time of the film's release - with her stunning turn as the icy Beth. After years of playing sunny, spunky sitcom heroines, first on The Dick Van Dyke Show and later on the eponymous Mary Tyler Moore Show, Moore flipped her beloved TV image on its ear, crafting a searing, nuanced portrait of an upstanding, introverted woman who can't accept and won't indulge anyone's frailties, including her own. Moore also earned an Oscar nomination for Best Actress, but lost the award to Sissy Spacek for Coal Miner's Daughter.

Redford pushes his actors to great heights, but is that enough to merit his Oscar for Best Director? Ordinary People is without question an elegant, well-constructed, understated film, but it looks and feels pedestrian when compared to the dazzling artistry and impeccable craftsmanship that define such masterworks as Martin Scorsese's Raging Bull and David Lynch's The Elephant Man, both of which bear the indelible stamp of their visionary directors and both of which received nominations for Best Picture and Director the same year. For the most part, the Academy likes to honor safe, mainstream movies with its Best Picture award, so I can totally understand why Ordinary People won that prize, but the Redford victory reeks of cronyism - an industry darling beating mavericks like Scorsese and Lynch, whose blistering styles push buttons and jangle nerves while their brash technique and peerless grasp of the medium consistently inspire awe. Though I've come to realize the Oscars are little more than a popularity contest (back in 1980 I was far more naïve) - and no one at the time was more popular than Redford - this slap in the face (apologies for conjuring up another Oscar offense) seemed especially egregious then and still rankles today.

I wondered whether my festering Oscar grudge would color my view of Ordinary People lo these many years later, but it did not. If anything, I respect the movie more now than I ever did before. Watching a film at different times in one's life is always fascinating and often rewarding. Some lose their edge, others no longer strike a chord, and then there are those that resonate more strongly because you've grown into them. Ordinary People, at least for me, falls into that last category. Just like many of my family members, I have issues with it, but my affection and regard for this wrenching portrait of fractured lives never wavers. 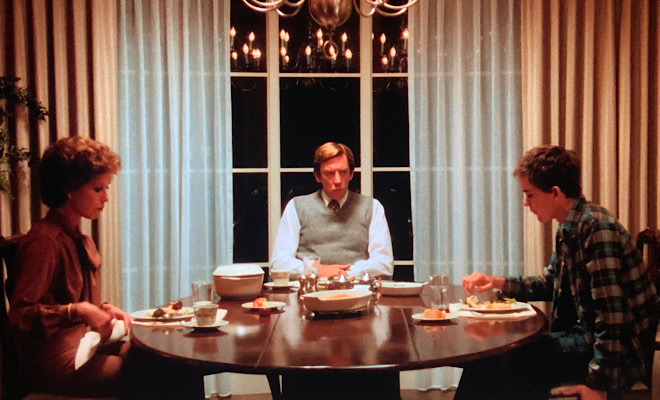 Vital Disc Stats: The Blu-ray
At last Ordinary People arrives on Blu-ray packaged in a standard clear case inside a sleeve. The front flap of the sleeve opens to reveal a two-panel reproduction of the movie's original poster art. A leaflet containing the code to access the digital copy is tucked inside the front cover of the case. Video codec is 1080p/AVC MPEG-4 and audio is Dolby TrueHD mono. Once the disc is inserted into the player, the static menu without music immediately pops up; no previews or promos precede it.

Though the film takes place during the fall and winter, bursts of bold color perk up the rather drab palette that reflects the emotional turmoil on screen. A vibrant red blouse, the sea green carpet on a flight of stairs, orange autumn leaves, the pale blue of Lake Michigan, passing yellow box cars on a train, and lush golf course greens all grab attention, and no print damage mars the drama's intimacy. Without question, this is the finest home video rendering of Ordinary People, making an upgrade a must for fans of this Oscar-winning film.

Ordinary People is a quiet, dialogue-driven film, but the Dolby TrueHD mono track still delivers when called upon. Sonic accents like rumbling trains, splashing water, a locker slamming shut, and fists pounding on a bedroom door pack a potent punch, but such subtleties as ambient traffic noise and the gentle clanking of silverware during a sedate family meal make a statement as well. Excellent fidelity and a wide dynamic scale lend the classical orchestrations and choral interludes a lovely resonance and depth of tone, and all the dialogue is clear and easy to comprehend. No age-related hiss, pops, or crackle intrude and no distortion creeps into the mix.

A couple of new supplements add luster to this Paramount Presents release.