Overview - Including the full-length features 'Broly: The Legendary Super Saiyan' and 'Broly: Second Coming' on a single disc.
OVERALL
For Fans Only 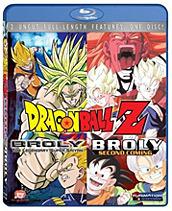 I should preface my review of this Blu-ray disc with an admission: although I'm a huge anime fan, 'Dragon Ball' has never been a particular favorite. Simply put, colorful costumes and energy blasts just don't do it for me -- instead, I tend to dig the dark, brooding neo-Tokyo brand of Japanimation. Still, I can't deny the series' immense popularity. The original 'Dragon Ball' films were based on an '80s Japanese manga of the same name created by artist/writer Akira Toriyama. Those early films gave birth to an animated television series called 'Dragon Ball Z,' a cult phenomenon that focused on the adult lives of Toriyama's beloved characters. In turn, 'Dragon Ball Z' paved the way for more than a dozen feature-length films based on the 'Z' universe.

The FUNimation Blu-ray release 'Dragon Ball Z: Broly' neatly collects two of those fan-favorite films in one package -- the eighth film, 'Broly: The Legendary Super Saiyan,' and the tenth film, 'Broly: Second Coming.' Instead of trudging through the lengthy backstories of each character involved, I'll make the assumption that anyone considering picking up this release is somewhat familiar with (or at least prepared for) the dense mythology that awaits them. Suffice it to say that all of the usual heavyweights appear in both film, including Goku, Gohan, Vegeta, Krillin, Chichi, Roshi, King Kai, and many, many more.'The Legendary Super Saiyan' begins as Vegeta meets a being named Paragas who informs him that the Legendary Super Saiyan has destroyed the south galaxy. Vegeta, Paragas's son Broly, and the rest of the crew set out to track down this dangerous cosmic force. However, Goku arrives in time to reveal the identity of the Legendary Super Saiyan -- Broly himself. Long, nonsensical story short, Goku and Broly fight, some characters don't live long enough to see the end credits, and Goku's friends will have to channel their power to Goku so he can go toe to toe with Broly.

In 'Second Coming,' Broly crashes on Earth after his climactic encounter with Goku. Seriously injured and reduced to his normal Saiyan state, Broly is frozen and forgotten. Seven years later, Goten, Trunks, and Videl inadvertently free Broly. An enormous fight ensues and the arrival of Gohan is the only thing that saves the trio. When Gohan is in danger, Goten charges back in to save him. When they're all in danger, Goku arrives to save the lot of 'em. In the end, there's plenty of timely arrivals, plenty of saving, and plenty of seizure-inducing fights.

For someone who's normally lost in the overly-complicated, intricate universe of 'Dragon Ball Z,' I was surprised to find that I didn't have an impossible time following the storyline of these particular films. While I'm sure a more thorough base of knowledge would have increased my enjoyment of 'Dragon Ball Z: Broly,' I still found the two films decidedly entertaining. The characters have an endearing warmth to their personalities and the battles had me entranced, effectively conveying immense reservoirs of clashing power. Likewise, the filmmakers did an excellent job of mounting tension, building suspense, and leaving me curious as to who would live or die.

Still, none of this was enough to convert me to the rabid fandom of 'Dragon Ball Z,' as all of the problems I've had with the series in the past are ultimately on display in both films. Each have too many characters with undefined limits, too many on-the-fly alterations to the rules dictating the use of their powers, and too many narrow escapes. The series has always reminded me of a monthly comic book in which there aren't any real consequences, deaths, or defeats -- instead, there's always a hidden loop hole in place to ensure each character's survival. To my eyes, this undermines any legitimate tension and places the story at the mercy of invincible main characters who have to feign weakness for the sake of the plot.

The end result is the anime equivalent of a blockbuster film franchise -- the two films have plenty of flash and bang, but they don't have any real meat on their bones. I'm sure fans of the series will be ecstatic to have these two entertaining films in high definition. For my own part, although I had decent time watching these extended episodes, I'm not overly anxious to revisit another 'Dragon Ball Z' experience in the near future.

'Dragon Ball Z: Broly' includes both films on a single BD-50 dual-layer disc. To select between 'The Legendary Super Saiyan' and 'Second Coming,' you need only access the main menu to make your choice. 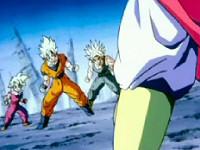 I may not have loved the films themselves, but I was exceedingly pleased to see that FUNimation has specifically remastered both entries in 'Dragon Ball Z: Broly' for their release in high definition. While the original 'Broly' DVD releases were marred by dirt and scratches, these new 1080p/AVC MPEG-4 transfers completely reinvigorate the visual impact of the films. The source doesn't appear to be softened by the digital processing, it simply looks clean and fresh. The colors are bold, the linework is crisp, and the black fills of the shadows are appropriately inky.

The only drawback to the experience is that the animation still suffers from a low-budget aesthetic that results in some inconsistencies in the picture. Specifically, I caught several instances of contrast wavering, discrepancies in color stability, and a few shots that looked a bit more worn than others. That being said, it's hard to imagine these movies looking much better, and overall this release shows that even classic 2-D animation can receive a welcome boost in clarity when mastered in high definition. 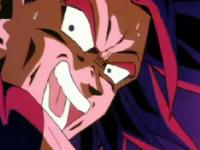 While FUNimation's video remaster returned the picture to form, the audio tracks are less impressive. Both films on 'Dragon Ball Z: Broly' feature an English DTS 5.1 surround track (1.5 Mbps) and an original Japanese language Stereo mix. While I preferred the flat Japanese track for authenticity's sake, the new English 5.1 mix has the best sound quality and inevitably became my go-to track.

Still, that's not saying much. Dialogue is clear, but it severely lacks subtlety. Characters tend to shout or whisper and there isn't a lot of variability in the tenor of their voices. The surrounds are employed, but they tend to amplify other elements of the soundfield rather than establish a convincing rear soundscape. As a result, ambiance and acoustics are generally non-existent. Worst of all, the LFE channel doesn't pack the kind rumbling bass punch I've come to expect of this sort, even though the music and sound effects are obnoxiously loud. To be fair, these tracks handle what they're given with commendable tenacity, but they fail to stack up against better high-def anime audio tracks.

FUNimation has issued several DVD versions of the 'Broly' films, but they've all been bare-bones releases, featuring only a few trailers here and there. As such, there are no real supplements to port over from the DVD. 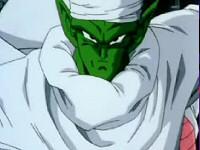 Although I don't consider myself much of a 'Dragon Ball Z' fan, I was surprised to find this 'Broly' double feature pleasantly (if mindlessly) entertaining. I also appreciated this disc's new high def remaster, which is a vast improvement over the previously-released standard-def DVD. Unforunately, a flat audio experience and a total lack of special features combine to ultimately make this a less than stellar Blu-ray release. Purists and die-hard fans of the series will probably still want to pick this one up, but more casual fans may want to give this one a rent first.

Sale Price 22.99
List Price 34.98
Buy Now
3rd Party 18
In Stock.
See what people are saying about this story or others
See Comments in Forum
Previous Next
Pre-Orders
Tomorrow's latest releases