Last of the Dogmen - KLSC

Last of the Dogmen starring Tom Berenger and Barbara Hershey finally comes to Blu-ray from Kino Lorber Studio Classics. From Writer/Director Tab Murphy, this modern-day romantic western about two people who discover a lost tribe of Cheyenne living deep in the Montana wilderness may play a heavy hand at times, but it proves to be a wonderful adventure with great performances. With a fantastic restoration, the film looks amazing capturing the beautiful the gorgeous Banff National Park locations and with a narration-free audio track the way Tab Murphy always intended. Recommended

Three prisoners are on the loose in the wild rugged Montana wilderness of the Oxbow. Sheriff Deegan (Kurtwood Smith) knows only one man who can track these men - Lewis Gates (Tom Berenger). Setting aside their personal issues, Gates sets off on horseback with his dog to bring the three men to justice, only when he goes to catch the men all he finds is torn clothing, an arrow, and a lot of blood. But he saw something else in the early morning mist he can’t explain. Turning to local anthropologist Lillian Sloan (Barbara Hershey), Gates hopes to figure out what happened to the men he was tailing, but together they’ll discover a secret tribe of Cheyenne that has been hiding in the wilderness for nearly a century.

Last of the Dogmen is one of those movies where in lesser hands it could have gone in a number of ways and none of them good. Writer/Director Tab Murphy crafts an interesting character drama within the structure of a classic frontier adventure film. Swap a lost tribe of native peoples for prehistoric creatures and you actually have something akin to Arthur Conan Doyle's The Lost World. There’s action without massive shootouts. There’s romance without the film completely stopping cold to let the two attractive leads smash their faces together. It could have gone down the road of films like Dances with Wolves or Broken Arrow but instead deftly avoids the white savior cliche. Our lead cast members aren’t the people who are going to save this tribe but merely help in the way they can. It’s a visually arresting and intricately paced film with strong arcs for our main characters.

If there’s a complaint to be made, I would say that the film at just under two hours isn’t quite long enough. I feel like there’s about half an hour of material missing. Part of this comes with the relatively underdeveloped relationship between Kurtwood Smith’s Deegan and Berenger’s Gates. We know they have a strained history and we learn pieces of the story, but their conflict never quite feels complete. We’re not given enough time for their tension with each other to fester or build to the climax. And because of this, the stakes for what leads to that final confrontation feel a little short-changed. 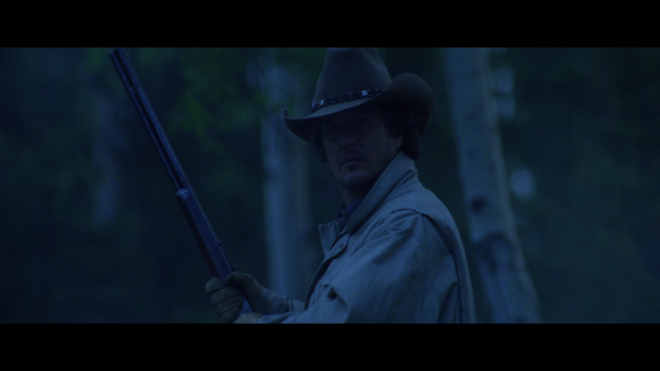 Now with this Blu-ray, we are technically getting two different versions of the film - although the runtime is not altered at all. Some brilliant individual somewhere decided this fairly straightforward storyline needed a folksy third-person narration by none other than the late great Wiford Brimley. Now, It’s been since VHS rental days that I last saw this film and I frankly didn’t remember enough of it to recall the narration, but now I’m glad we have an option to see the film as Tab Murphy always intended without it. It doesn’t help the story, it doesn’t explain anything, and it’s not even a character in the movie telling the story. Brimley is simply “some guy” that Berringer’s character happened to tell the story to that is narrating to us making it an even more bizarre creative choice. And then there’s the quality of Brimley’s delivery. This is one of those rare times where Brimley just wasn't the right fit. There's folksy, and then there's folksy. 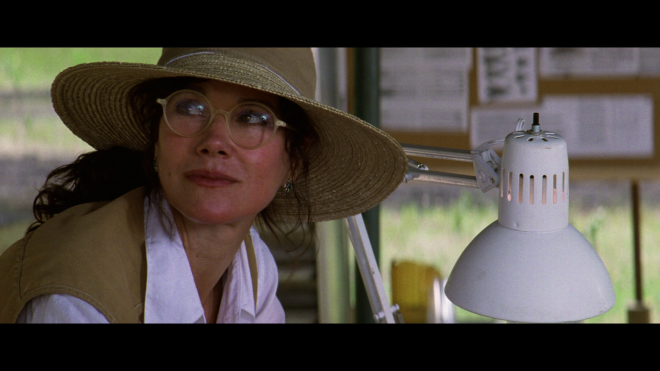 Last of the Dogmen is a fine film. A romantic western fantasy, it offers up an intricate personal drama set against the backstage of the beautiful Canadian Rockies standing in for Montana. I’ve spent many summers hiking that territory in Banff, Yoho, and Canmore so this film is also a bit of a family photo album of sorts. The big horseback chase sequence is a fun moment in that I’ve eaten at half the restaurants Tom Berringer rides past at a full gallop! As I mentioned I hadn’t seen this film since the VHS rental days and I honestly don’t think I ever caught it on cable. It’s one of those nice films that deserved to do better at the box office and have enjoyed a stronger longer life on home video. And it certainly shouldn’t be Tab Murphy’s only directing credit to his name. He showed a sure and capable hand behind the camera pulling compelling performances from his cast while bringing in a technically sound and beautifully shot film.

Vital Disc Stats: The Blu-ray
Last of the Dogmen finally scores a Blu-ray release thanks to Kino Lorber Studio Classics. Pressed on a Region A BD-50 disc, the disc is housed in a standard sturdy case with an identical o-card slipcover. Also included is a booklet featuring an essay by Julie Kirgo. Now that Twilight Time is a shadow of its former self, I really missed Kirgo’s essays so it’s a real treat to get a new one from her filled with her usual impressive range of passion and insight. The disc loads to a static image main menu with basic navigation system at the bottom of the screen. 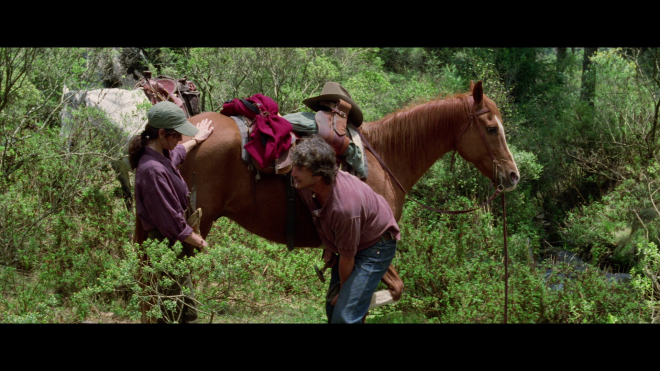 Well, if there’s one negative I’m going to say about this newly restored transfer is that it’s not on 4K Ultra HD Blu-ray.

Reportedly restored from a new 4K scan of the original camera negative with color grading and approval by Director Tab Murphy and cinematographer Karl Walter Lindenlaub, this is a fantastic-looking release. From the opening credits through to the final fadeout - this is a beautiful transfer. Details are strong and clear right from the getgo allowing you to fully appreciate fine facial features, the intricate costume details, and the impressive production design of the Cheyenne village. Film grain is retained and fine without ever appearing overly noisy, nor does it look to have been scrubbed without any overt signs of smoothing. Colors are robust with natural primaries. Being much of the film was a shot in the Canadian Rockies, there’s a lot of “Green” as the dominant color. Film elements are in overall great shape, with no obvious damage or age-related shenanigans. There is some occasional speckling but it’s nothing serious and you’d barely notice it if you weren’t looking for it. Again, the only way this could look any better is on a full 4K disc with HDR. 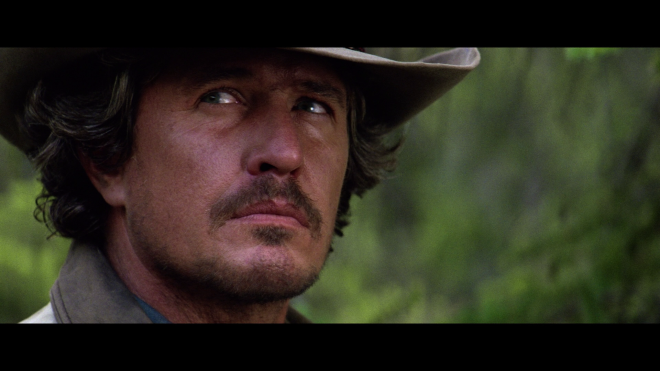 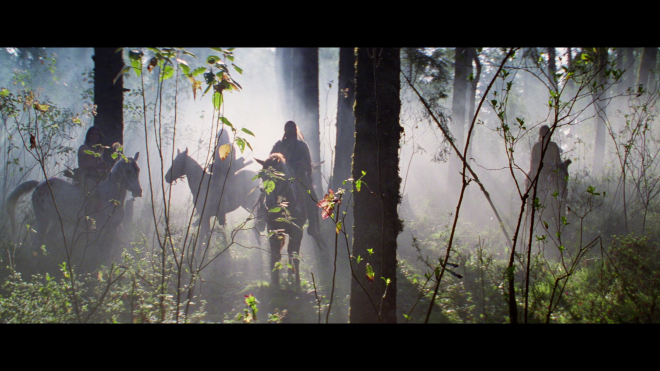 In good nature, KLSC is giving folks two ways to watch the film. Well, technically there are four, but you can experience the film with narration as originally seen in theaters and on VHS or without narration as director Tab Murphy always intended. And with those two options, you get either a DTS-HD MA 2.0 or 5.1 mix. Since I was more interested in comparing the narration vs without narration, I only focused my time on the 5.1 tracks for both. I gave the 2.0's a check and they’re fine but I’m not sure how necessary they’ll be for anyone with a robust home theater system.

Now I already stated that I preferred the narration-free version in my main review and I’ll give you another reason why here. The narration tends to squeeze out the other audio elements. So take when Wilford Brimley starts talking over the opening credits music as the first immediate example, the great score by David Arnold is pushed out to make room for this unnecessary story framework. That’s obviously not an issue without the narration - the score stays strong and stable and a beautiful piece of work, even if it can be a bit heavyhanded in some scenes. It’s just flat not a movie that needed narration so I’m glad we have this option and those who like it can have their version too.

Both Narrated and Narration-Free versions offer up clean dialog exchanges without issue. Sound effects and atmospherics are impactful and move through the channels nicely. While this isn’t the most aggressive film, there’s enough surround activity that the film doesn’t always sound front-loaded or stagnate. The big chase sequence is probably the most active stretch in the film ahead of the climax with plenty of surround activity. So again, you have multiple options and I strongly favor the narration-free version over what originally hit theaters and rental shops all those years ago. 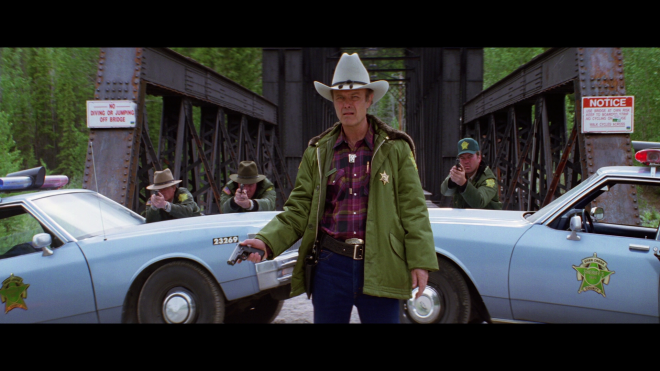 Last of the Dogmen doesn’t exactly come packed with a robust assortment of bonus features, but we do get a nice audio commentary track. Featuring writer/director Tab Murphy with producer Joel Michaels and moderated by Douglas Hasdale, there’s never a dull moment. While it may not always be scene-specific to the action on screen, everyone offers up plenty of insight and information about the production, that fans should glean a number of interesting tidbits. 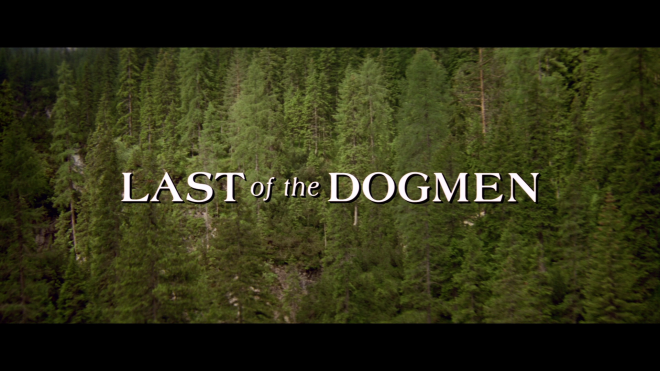 I hadn’t seen Last of the Dogmen in so long that I barely remember renting it on VHS. I remembered liking it well enough but the film got lost in the shuffle for the last couple of decades. With KLSC’s new Blu-ray, reconnecting with the film was a pleasing run. It may not be the greatest film ever made but it’s solid entertainment and a well-made romantic western adventure. Now on Blu-ray for the first time, fans can enjoy a beautiful new restoration effort while experiencing the film the way it was meant to be seen without the silly narration. But fear not, if you liked that narration there’s a separate audio option for that. If you’re a fan or new to the show, this is a nice piece of mid-90s entertainment and well worth your time. Recommended