When a person goes missing, a suspicious murder needs solving, or if your prized dog gets kidnapped - there’s only one man for the job Magnum P.I. Tom Selleck brings all of his leading man charm and swagger to the role that made him a household name for eight seasons of Hawaiian action and adventure. Mill Creek delivers All eight seasons of Magnum P.I. to Blu-ray stretched across 30 discs. The A/V presentation leaves something to be desired but it’s still better than what we’ve had on DVD and comes with a few decent bonus features. At the end of the day, it’s a worthwhile pickup. Recommended.

If your brother goes missing or your dog gets kidnapped or a dear friend has been murdered or if there's a sunken treasure in a sacred cove - if you live in Hawaii there’s one man for the job Thomas Magnum (Tom Selleck). Living on the estate of a world-famous novelist, Magnum solves cases while ducking the guard dogs Zeus and Apollo and the irate manservant Higgins (John Hillerman). With his best friends - the helicopter pilot TC (Roger E. Mosley) and club owner Rick (Larry Manetti), the eternally cash-strapped Magnum uses every resource at his disposal to get the job done and bring the bad guys to justice - with breaks to drive the Ferrari and swim in the ocean. 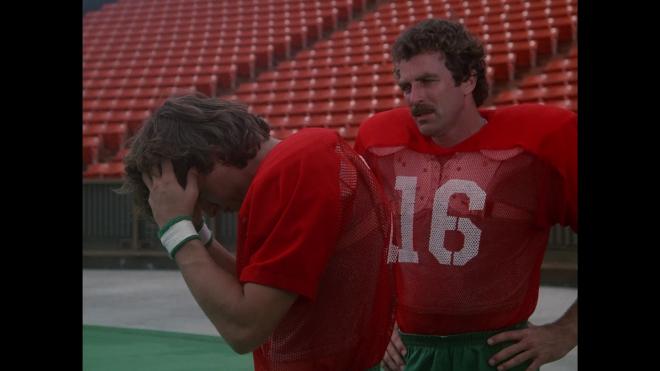 Tom Selleck was in peak form for his star-making turn as Thomas Magnum, Private Investigator. The 6’4” leading man brings all the charm and swagger of a genuine Hollywood star to every scene. Watching the series again it becomes quite clear why George Lucas and Steven Spielberg wanted him for Indiana Jones. If things had been different and Selleck slipped on the fedora and cracked the whip - those movies still would have been great (although Ford was and remains the better choice).

Eight seasons and 158 episodes is a long run for a show. Not every episode of Magnum P.I. is a winner, there are a few duds where the mystery-of-the-week just wasn’t that mysterious. Some episodes are quite predictable about who the culprit is, but more often than not, each episode is at the very least entertaining. The series hit its peak in Seasons 3-5. Each of those episodes was gold with Selleck and Hillerman earning their Emmy wins for the show. Long about midway through Season 6 the series started to fall off. Plots started to become just a little too stretched for their own good. At the same time, Selleck was starting to appear in movies like Runaway, High Road to China, and Three Men and a Baby (Ted Danson even drops by for a guest spot in a Season 1 episode). By Season 8, you could feel Selleck wanting to work on other things. He was still the slick charming Thomas Magnum, but there was something in the eyes that just felt different. Such is the case for any show that runs too long. At least they went out while the show was still good and didn’t completely fall apart or jump the shark into oblivion. 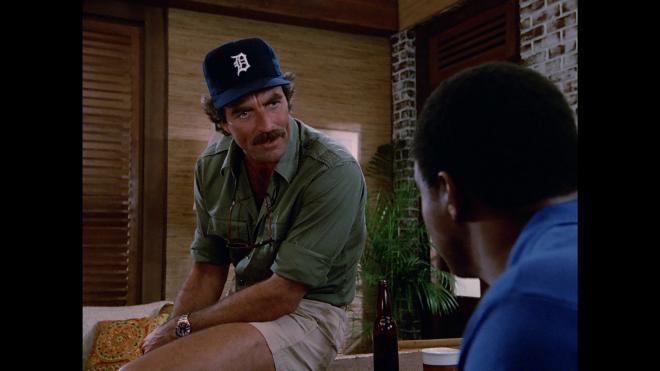 I was too young to watch and appreciate this show during its original run, but in college, it became a late-night staple. I’d stay up to get homework done and switch over for an episode before crashing out. It was relaxing entertainment and I’m glad to see the show still holds up all these years later. In an era where television is in the middle of a new Golden Age with streaming services competing for the best content, it’s nice to reconnect with an old throwback. I appreciate that aside from the occasional two-parter, the episodes for Magnum P.I. weren’t interconnected or had a long throughline plot that would gradually become too convoluted for its own good. There’s a charm to one-and-done episodes where you can pick any disc in the set, throw it in your player, and enjoy. 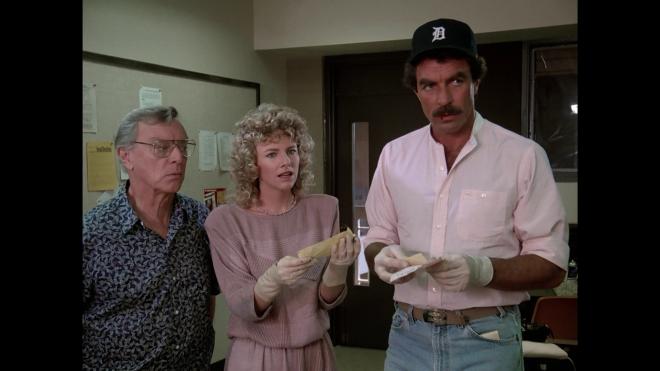 Vital Disc Stats: The Blu-ray
Magnum P.I. The Complete Series finally finds its way to Blu-ray thanks to Mill Creek Entertainment. All 8 Seasons are spread out over 30 discs. The discs are secured between three sturdy multi-disc cases. Each disc gets its own tray without being stacked on top of the other. Each disc loads to a static image main menu with basic navigation options allowing you to play all episodes on the disc or skip to a favorite episode. 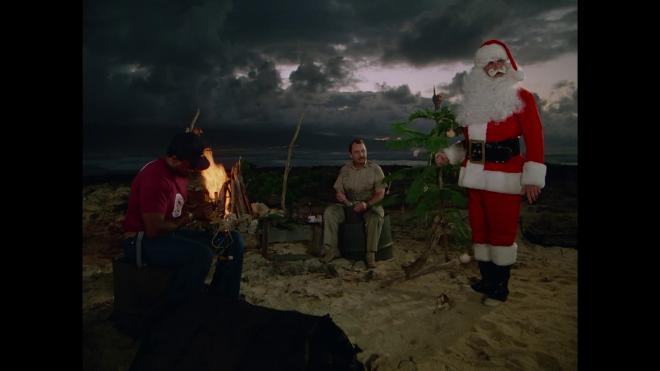 Well, I guess one good thing can be said about having Magnum P.I. on 1080p Blu-ray is that we get it in the series’ original 1.33:1 broadcast ratio and it hasn’t been retooled or reframed for widescreen televisions as has become too common for classic shows. This isn’t to say that Magnum doesn’t make a welcome High-Definition debut, but considering how many episodes are smashed onto each disc - it’s obvious it could look better. For this review I watched at least one episode per disc - I tried to get through two when I could. Each episode ranges from beautiful to pretty flawed. The main issue is compression, when you smash that many episodes onto a single disc (sometimes as many as six) flaws start to crop up. Daylight sequences look pretty great showcasing some fine details with bright bold colors. Dimly lit interiors are where the transfers suffer most. Bars or night scenes can look pretty flat with overly thick black levels and depressed details. Film grain is apparent but it’s unresolved and a bit on the gloppy side of things. Colors thankfully are handled well giving plenty of pop for reds, blues, and yellows with healthy flesh tones. 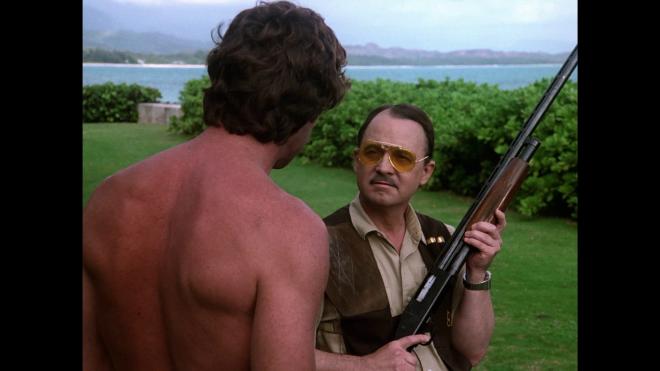 Now for the extra sake of comparison - I pulled up some of the free episodes streaming on Amazon Prime ad-supported through IMDB-TV and I checked out some DVDs from my local library. The masters supplied for these Blu-rays are certainly newer with fewer instances of speckling and wear and tear. The IMDB-TV transfers look pretty damn good but also appear to be the same older masters supplied for the old DVD sets and can be pretty rough looking in spots with a lot of noise in the image and pretty constant speckling. So on that note, there’s yet to be a perfect edition of this show for fans to digest. Overall these Blu-rays are pretty good even if they’re not ideal. 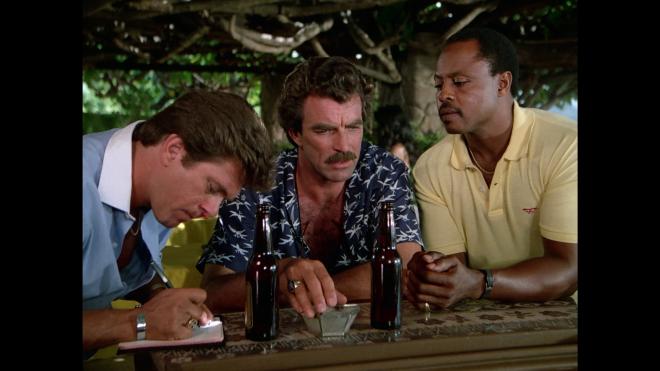 Each episode of Magnum P.I. comes packed with a respectable DTS-HD MA 2.0 track. While these are hardly revolutionary audio tracks, they’re true to the show. Dialog comes through clean enough without issue. Scoring by Mike Post has that classic 80s action jazz/funk beat and plays well pumping up the suspense of any given scene. Sound effects come through cleanly, and the Ferrari's engine certainly gets plenty of attention. Levels are spot-on - compared to the streaming version I didn’t need to compensate in that area. Streaming I felt the need to push the volume a couple of spots higher than normal so that's another added benefit of having this series on disc. 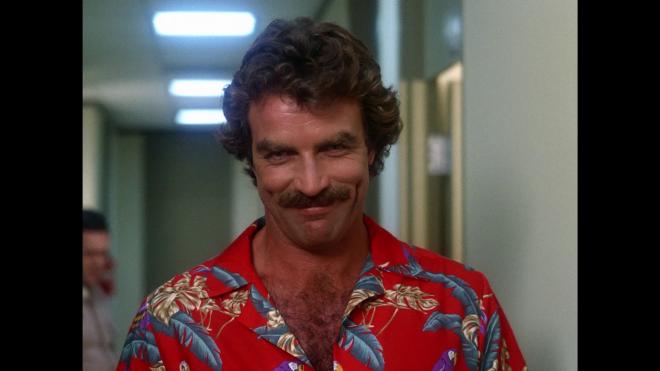 The Bonus features package for this set isn’t the biggest or most robust batch ever curated, but it’s pretty good. You get a couple of episodes of The Rockford Files that Selleck appeared in, some cast and crew interviews, and some audio commentaries for the later episodes. It’s weird that only three episodes of Season Eight get audio commentaries but, there you go. An odd assortment to be sure, but worth digging through if you’ve got the time or gumption to do so.

Season One - Disc One 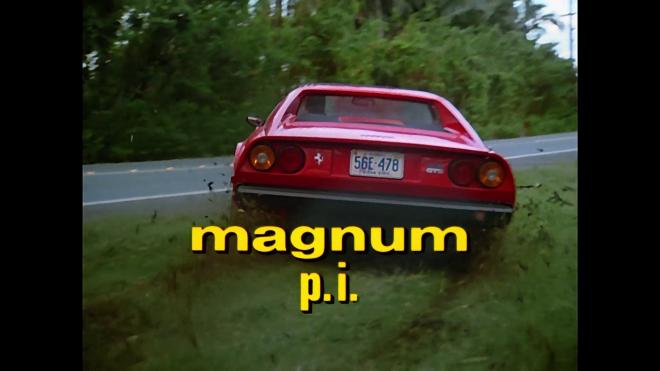 Magnum P.I. is classic 80s action-adventure television. Tom Selleck was at the top of his game with this show. When he could have been Indiana Jones, I think he made the right choice sticking with Magnum. With eight seasons for a total of 158 episodes, the series is a fun run. Sure there are a couple of dud episodes here and there but for the bulk of the run, you’ve got hours of great entertainment ahead of you.

Mill Creek Entertainment brings all eight seasons to Blu-ray in a 30-disc set. While the video transfers are alright, they could be better and suffer compression issues with anywhere from five to six episodes squeezed onto BD-50 discs. There are moments the show looks great, and others when it’s not up to snuff. The audio for each episode is clean and effective without issue. Bonus features - as odd an assortment as they may be - give you a little extra material to dig through. At the end of the day this is a pretty good set - maybe not perfect but as good as we’re likely to get around these here parts anytime soon. Recommended.