Art inspires imitation with 1985’s Creature a low-budget but incredibly entertaining Alien knockoff starring Stan Ivar, Wendy Schaal, Diane Salinger, and Klaus Kinski. While a knockoff, director and co-writer William Malone makes the concept his own with some inventive twists and memorable gore effects. It’s low-budget sci-fi horror at its finest and now it’s out on Blu-ray thanks to Vinegar Syndrome with an excellent transfer, both cuts of the film, and some solid bonus features. If you’re a fan - don’t miss it, Recommended.

NOTE - Vinegar Syndrome is currently in the middle of their end-of-year Partner Label Sale, all of their main VS releases are not available - but will be January 1st. As soon as the sale page is back up we'll link to it so you can snap this release up toot sweet.

A research team on Saturn’s largest moon, Titan, goes missing while responding to a mysterious beacon. Two months later the team’s ship crashes into Earth’s orbiting space station. Now the crew of the Shenandoah has been dispatched to Titan to investigate. What they find is a sight beyond belief - an ancient alien-built research facility containing specimens from across the galaxy. After waiting thousands of centuries, one Creature has gotten loose - and is very hungry.

You’ll have to forget the 5-year-old me that saw this on television, but for a long time, I actually thought this movie was a sequel to Alien. When you see one phallically-appendaged creature and then you see another phallically-appendaged creature - they gotta be the same well-adorned beast, right? Well, my childish confusion was apparently intended. The story goes as 20th Century Fox just got the wheels turning for a sequel to their hit sci-fi horror film and a rival studio did what any other studio would do and churn out a rushed to theater knock-off to profit off the hype. It’s well known that Creature was a hit-for-hire job for writer/director William Malone with the specific goal of essentially ripping off Alien, but all credit to the filmmaker for not doing a cheap carbon copy and making something that’s genuinely pretty damn good. 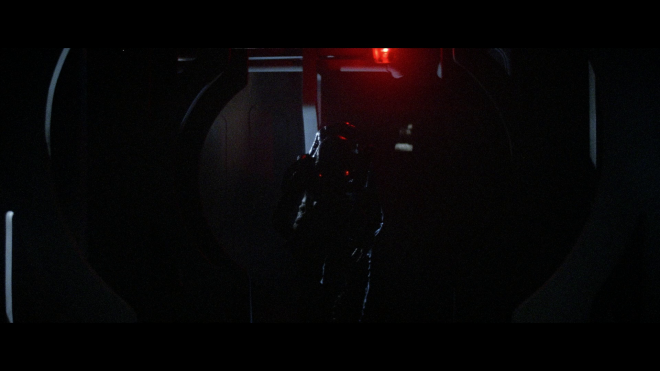 Malone knew what the movie was and understood the extent of his limited resources and stretched his cast, crew, and effects budget as far as it could go without breaking. Early effects shots give you a nice sense of size and scope of the Shenendoah and its arrival to Titan - complete with ripped-off Star Wars sound effects - as the crew lands on the moon. When their ship is disabled, the film tightens up. Wide establishing shots are virtually non-existent with the cast in tight focus in creepy and dark locations.

The film uses every trope in the low-budget sci-fi book. The power supply is limited, so they can’t have any lights on. The air supply is limited so there are long stretches without dialog. If things are getting slow, there’s some random nudity and or gore to speed things up again. The diabolical critter often looks better in shadows so there’s an extra effort to keep the rather large intromittent organ-shaped head obscured in near-total darkness. It's economic filmmaking at its best by trusting the actors to do their jobs while making every penny count. 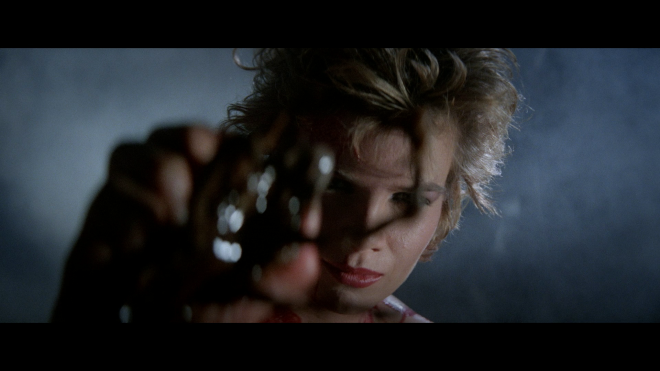 As much as Creature is a ripoff of Alien, it smartly spins new elements with the material introducing a zombie-like mind-control element that keeps things extra creepy and tense. Even the plot of the film with different factions of American and German space agencies competing for the find on Titan is clever. It’s actually an element that was almost used with William Gibson’s failed drafts for Alien 3. There’s a pretty kickass audio drama version of that screenplay if you haven’t listened to it - it’s exclusive on Audible.

All credit in the world needs to go to the cast for selling this show and genuinely working with every ounce of dialog. Stan Ivan gives a fitting turn as the commander of the ship in a nice departure from his Little House on the Prairie days. Ferris Bueller’s dad Lyman Ward is a solid “company man” while Wendy Schaal turns in a respectable brainy leading lady. Pee-Wee Herman actress Diane Salinger gets to play the bad-ass mercenary in what turns out to be her first film role! Then of course there’s the elephant in the room - Klaus Kinski as Hans Rudy Hofner. There are a lot of crazy stories about Kinski working on the film, and all of them are believable.

At the end of the day it’s a little unfair to dismiss Creature as only an “Alien knock-off.” It’s actually a lot better than that. Sure, there are story and creature similarities, but the film works well, has a great tight energy, and there are some damned impressive gore effects! Not the greatest movie ever made, but it checks off the list - it’s well made, solid performances, decent script, and is very entertaining from start to finish. And now thanks to Vinegar Syndrome we get both cuts of the film - the original theatrical release as well as the longer original The Titan Find cut for fans to devour!

Vital Disc Stats: The Blu-ray
At long last, a quality release of Creature comes to home video thanks to Vinegar Syndrome. Pressed on a Region-A locked BD-50 disc, the disc is housed in a standard clear case with original slipcover artwork as well as reversible insert artwork showing the two familiar art designs used for posters and VHS releases. The disc loads to an animated main menu with a standard menu layout. 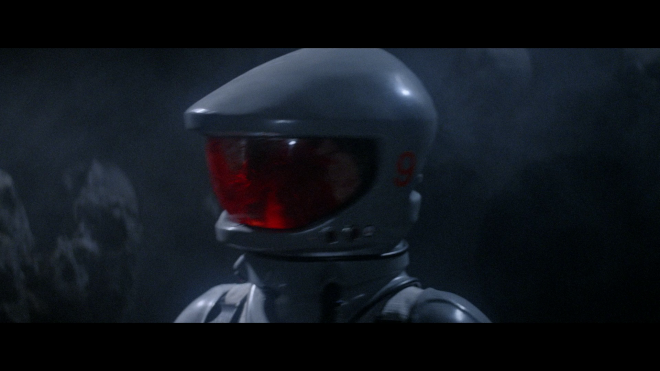 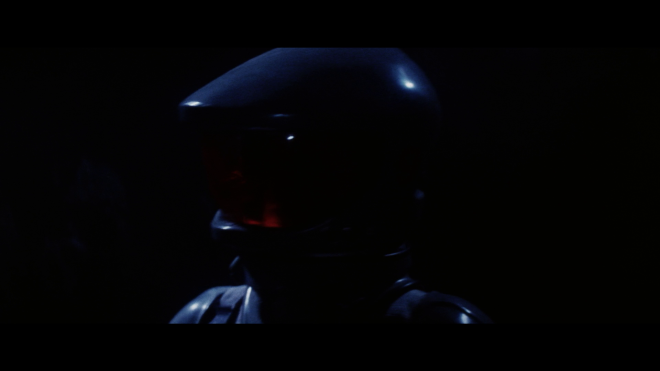 Reportedly scanned and restored in 4K from the original 35mm negative, Creature captures a genuinely excellent 2.35:1 1080p transfer! I’m actually rather surprised given this title’s popularity that Vinegar Syndrome didn’t opt for a full 4K release, but there could be some legal hangups there given the film’s odd semi-public domain status. Regardless, this is another A+ effort from this boutique label.

After decades of genuinely crap releases, I was most impressed with how clean it looked. There’s still some slight speckling here and there, but nothing as severe as we’ve seen with past DVD and Blu-ray editions. Details are strong throughout with a prominent but natural-looking grain structure to the image. There were things I’d never noticed before - like pieces of set design that were simply wrapped in a heavy-duty black garbage bag. You also get a clearer image of the titular Creature and you can fully appreciate the great gore effects. 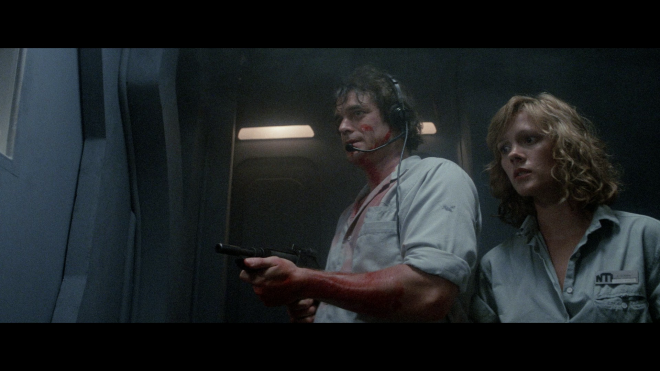 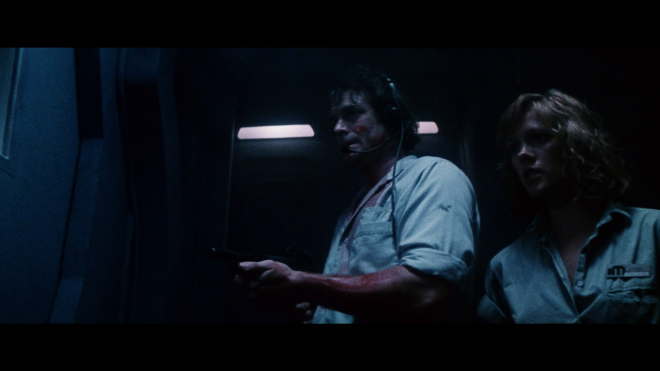 Colors are well maintained with healthy skin tones and bold primaries. Black levels are strong giving the image a great sense of depth, even with so many locations steeped in darkness to hide incomplete sets. Things can get pretty dark but never stuck in crush territory - past releases were almost unwatchable for long stretches, especially during the first creature attack sequence. As a whole, this is a great transfer and honestly better than I was expecting.

Now for the longer, The Titan Find cut, we’re not quite so lucky. Sourced from the only known surviving vault print, it displays a lot of age-related wear and tear with a notably murky presentation. This is actually kind of how I’m used to seeing this film since the first DVD I picked up with oppressively dark shadows, low detail quality, and some dodgy colors. In a card before the movie starts, Vinegar Syndrome explains they did the best they could with color correction to make it at least watchable - and it is just that, watchable. It’s too bad the original elements for this cut couldn’t be located for a full restoration because this cut works just a little better giving more character development and adding some nice juicy extra effects shots. 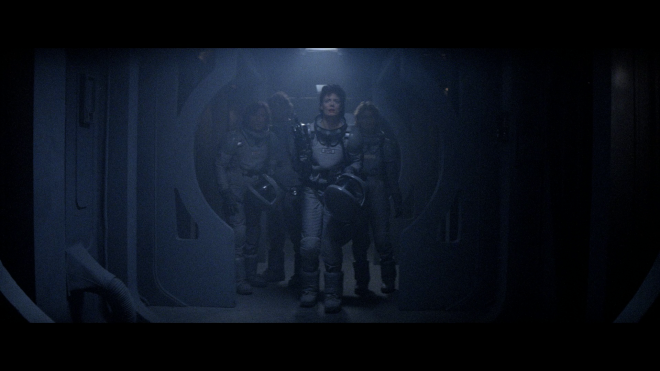 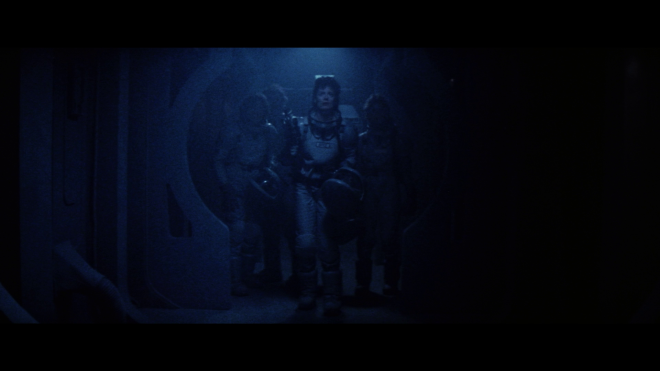 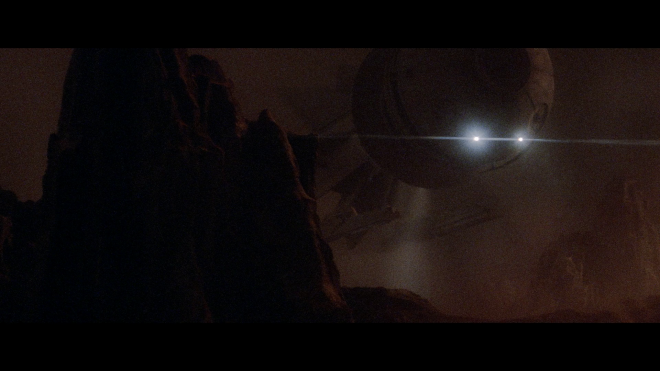 On top of an excellent video presentation, we’re given a clean and uniformly excellent DTS-HD MA 2.0 mix to match. Part of the fun of this film is all of the laser blast and spaceship sound effects that were picked off from Star Wars. Now you can cleanly and clearly hear the sounds of Tie Fighters and the engines of the Millennium Falcon when the Shenandoah lands on Titan. Whenever anyone opens a door it’s clearly a laser blast from a Stormtrooper blaster. But that’s all just auditory flavoring for this low-budget sci-fi gem. Dialog is clean and clear throughout. Creature and gore effects are appropriately squishy. And the excellent score from Thomas Chase and Steve Rucker is doing its best Jerry Goldsmith impersonation for an appropriately large-sounding moody orchestral soundtrack. 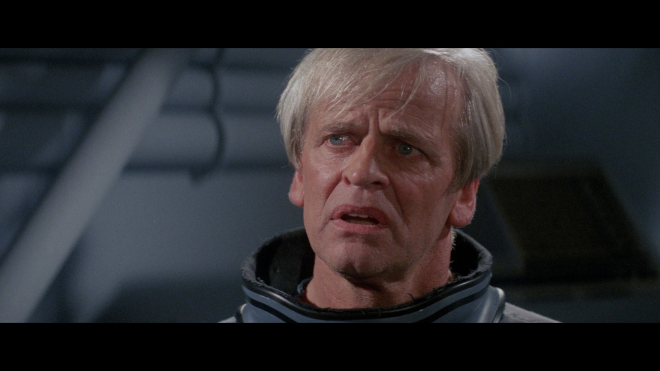 Not content with some new cast and crew interviews, Vinegar Syndrome adds in the full feature-length cut of The Titan Find. Given the condition of the surviving print, this is given its own separate presentation since seamless branching would just look obvious and out of place from one shot to the next. Even rough-looking, it’s worth watching. Since it's found in the Bonus Features menu, I'm including it in this section and rating this section accordingly. Also included with this release is a new Audio Commentary featuring the crew from The Hysteria Continues that’s a fun track to check out. For those curious about the production itself, the meatiest bits to chew on are main cast and crew interviews with the full interview from writer/director William Malone. 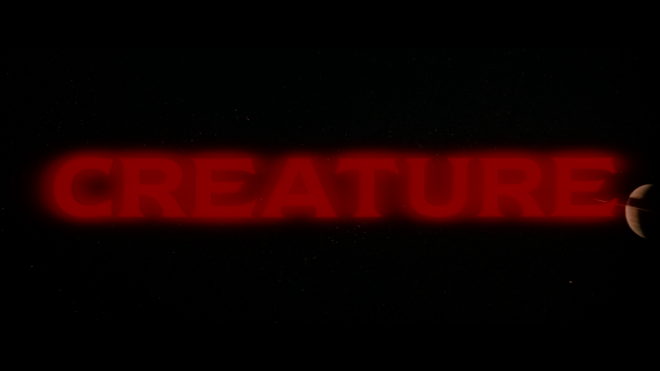 Creature may not be a genuine classic piece of science fiction filmmaking, but for a low-budget knock-off, it’s actually pretty damn good and accomplishes a lot with very little. William Malone’s smart use of set design and resources along with his solid cast, Creature turns out to be an inventive highly entertaining piece of 80s sci-fi.

After years of terrible home video releases, Creature comes home to Blu-ray thanks to Vinegar Syndrome. Armed with a fresh new restoration, the film looks and sounds better than ever complete with the original cut of the film as a bonus feature. Add in some extra cast and director interviews, you get a great set worth adding to your growing collection of schlocky science fiction. And if you really want the full Creature experience, there’s a really fun Novelization from Christian Francis that’s a pretty damn fun read.  Recommended