Yodlaf Peterson (Franco Nero of Keoma) is a suave Swedish arms dealer with a love for fast money. Vasco (Tomas Milian of Traffic) is a trigger-happy Mexican bandit with a hate for suave Swedish arms dealers. But when the two team up to kidnap a professor who holds the key to a fortune in gold, they find themselves hunted by the American army, stalked by a marijuana-crazed sadist (Academy Award winner Jack Palance) and trapped in the middle of a revolution about to explode. Can these two enemies blast their way across Mexico together without killing each other first?

Along with Enzo Barboni's 'They Call Me Trinity,' released the same year as the film currently under discussion, Sergio Corbucci's 'Compañeros' marks a turning point in Italian "Spaghetti" westerns. The international success of both features revived the subgenre to continue for a couple years longer before coming to a sad end by the mid to late seventies. What they did was bring the comedy that was for years treated with more restraint to the forefront, to be in equal measure with the action and violence displayed. However, the directors' treatment of this couldn't be more interestingly different. While Barboni turned the familiar conventions into a farce other filmmakers could easily replicate, Corbucci was more satirical and subtle in his approach. With tongue firmly pressed against cheek, the Italian-Spanish coproduction, co-written by Corbucci and four others, strictly adhered to the then-popular Zapata Western formula to the point of caricaturizing it with amusing blink-and-you'll-miss-it allusions.

In order to see these slyly clever hints in 'Compañeros,' arguably one of the better known and easily recognized features of the period aside from the more obvious titles, one must be relatively acquainted with the genre. But this doesn't take away from its overall enjoyment; audiences can still sit back and relish the gun-slinging havoc. On the surface of it, the plot, set during the Mexican Revolution, hilariously opens with shoe-shining peasant Vasco (Tomás Milián) inadvertently igniting a revolt in his village, which catches the attention of General Mongo (José Bódalo), who appoints him a high-ranking lieutenant. What makes the sequence funny is that Vasco kills an army colonel out of pride rather than political ideal, and it's clear he represents the somewhat naïve, uncultured Mexican bandit, a typical archetype of the Zapata Western. In Milián's capable hands, the character is a likeable doofus, a ridiculously lucky and overtly confident clown who inexplicable is also an excellent draw and sharp-shooter. 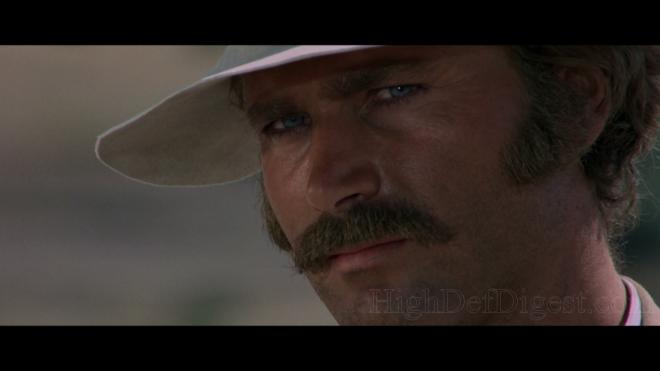 A little later, another recognizable archetype of the subgenre within the subgenre makes an appearance — the suspiciously amoral type whose motives and allegiance are questionable mostly because he's a foreigner, similar to the model established in the Leone-Eastwood "Man with No Name Trilogy". Riding into town on a train hauling a car loaded with explosives and weapons, the dapperly dressed Swede Yodlaf Peterson (an awesomely suave Franco Nero) arrives with a cool self-assurance that rubs Vasco and his new merry band of drunken bandits the wrong way. In fact, they first bump into each other in comical meet-cute fashion where Yodlaf mysteriously gives the dumbfounded Vasco a dollar coin without explanation, a running gag that has a hilarious punchline by film's end. Circumstances force the two men to travel together to the U.S. and rescue Professor Xantos (a princely Fernando Rey), but in yet another obligatory archetype, Jack Palance is the reprehensible American business tycoon determined to stop our reluctant heroes and exact vengeance on Yodlaf.

All these conventions and devices in 'Compañeros' are used to comical effect with a few bitingly embroidered scenes, never feeling as though it was meant to be taken serious, and Corbucci keeps things light and humorous. This is probably most apparent when certain moments come across as possibly intentional jabs to other films, particularly those in which Nero and Milián starred in. Oozing with an amusing 'Butch Cassidy and the Sundance Kid' vibe, the most noteworthy sequences are references to the Django mythos, made all the funnier because Nero and Milián played the character — Milián more in spirit than in name while Nero actually created the infamous personality. One awesome moment is when Milián's peasant drags a coffin behind him and the two sneak the professor in it across the border. Later, in the climactic extended shootout, Nero mows down a horde of outlaws with a machine gun, and Milián handles a machete similar to his "Cuchillo" character in Sergio Sollima's 'The Big Gundown.' Whether deliberate or not, these moments, combined with several others, make for a fun and awesome classic Italian western.

Blue Underground brings Sergio Corbucci's 'Compañeros' to Blu-ray on a Region Free, BD50 disc housed in a blue eco-vortex keepcase. Two versions of the film are offered on the same disc: the English-dubbed American cut running at 115 minutes and the original 119-minute Italian version. The difference between them are minor moments of extra dialogue. At startup, viewers are given the choice between the two before switching to the usual selection of menu options with full-motion clips and music playing in the background.

The classic Zapata western rides to Blu-ray with a strong yet a bit rough around the edges 1080p/AVC MPEG-4 encode. Admittedly, it comes with its fair share of softness and mild flatness, but considering the movie is turning 45 years old this year, the presentation overall is relatively satisfying with a few appreciable moments sprinkled throughout. The source has aged remarkably well, showing good resolution and clarity, making the use of digital enhancements all the more painful.

Details are decently defined with clean fine lines in the costumes, the surrounding foliage and various rock formations of the desert landscape, but of course, this isn't always consistent. There is clear evidence that the restoration effort included the use of digital noise reduction. Facial complexions are sometimes revealing, especially during close-ups, but the dreaded DNR makes actors often appear waxy. Originally shot on the 2-perf Techniscope negative, the presentation is sadly lacking the heavy amount of grain expected of the stock. While not particularly impressive or noteworthy, contrast is nevertheless stable with crisp, clean whites throughout. The palette could be a tad bolder, but colors are mostly cleanly rendered and satisfying. Black levels are strong and accurate, giving the 2.35:1 image a nice cinematic appeal, yet the sight of some digital scrubbing makes this high-def transfer is a mild disappointment.

The duo of rowdy, bickering bandits journey across the border with an enjoyable and gratifying DTS-HD Master Audio mono soundtrack. The only issue arguably worth noting is the continuous hissing heard from beginning to end, which is easily excused as the fault of the source and actually gives the presentation some character. Besides, after a while, it's not much of a distraction. Background activity and various atmospherics are intelligible throughout, providing the lossless mix with a welcomed sense of presence and clarity. Dialogue reproduction is outstanding and distinct while dynamic range is surprisingly extensive though gunshots tend to come off a tad too bright. There's not much bass to speak of, but it's nevertheless adequate for a movie of this caliber and vintage.

Marking a turning point in Italian "Spaghetti" westerns, Sergio Corbucci uses genre conventions and devices to comical effect in the wildly entertaining 'Compañeros,' starring Franco Nero and Tomás Milián. The Blu-ray arrives with a strong yet rather disappointing video, but the lossless audio is quite satisfying, making it the presentation's saving grace. With a very light collection of supplements, the overall package is ultimately for loyal fans, but the curious should nonetheless give it a rent.

Sale Price 29.99
Buy Now
3rd Party 22.36
In Stock.
See what people are saying about this story or others
See Comments in Forum
Previous Next
Pre-Orders
Tomorrow's latest releases