Come Drink With Me (Special Edition)

When a group of bandits kidnap the Governor’s son and hold him hostage only one woman can save him and bring the bandits to heel. Come Drink With Me is high-flying wildly entertaining Shaw Brothers martial arts mayhem at its finest. Starring Cheng Pei-pei, the film moves fast and loose with story, but its great action and colorful characters hold your attention through the exciting final battle. Arrow Video keeps kicking with their Shaw Brothers releases for another grand Blu-ray effort with a pleasing A/V presentation and a nice array of bonus features to pick through. Recommended

Jade Faced Tiger (Chan-Hung Lit) and his diabolical bandits seek the release of their comrades facing execution. To secure their friend's release, they kidnap and ransom the Governor’s son. Only the bandits weren’t counting on the Governor sending his best warrior - and daughter - Golden Swallow (Cheng Pei-pei) to negotiate the peaceful release of his son. Only things don't go peacefully. With the help of a buffoon called “Drunken Cat” (Yueh Hua) - Golden Swallow may have a chance at taking down Jade Faced Tiger and a mysterious kung fu master called Liao Kung (Yeung Chi-hing).

I’m a fan of the high-flying wuxia-styled period epic Martial Arts flick, but there are so many it's often hard to remember one film from the next. Then gems like Come Drink With Me come along and you realize why this style of martial arts action film was so damn popular for so long. The Shaw Brothers certainly fed the genre with dozens if not hundreds of films in this action sub-genre - so many it’s difficult to fully catalog their output. While I love this little section of kung fu movies, I’m meeting more people that aren’t as excited about Arrow or 88 Films' latest releases from the Shaw vault. They’re more into the Bruce Lee-infused gritty urban style of Martial Arts movies. And I get that, it’s an appealing genre to this day - especially because trying to mount a period kung fu epic is extremely costly and difficult to pull off. But I keep hoping someone new to these older period martial arts films will find them and appreciate them. 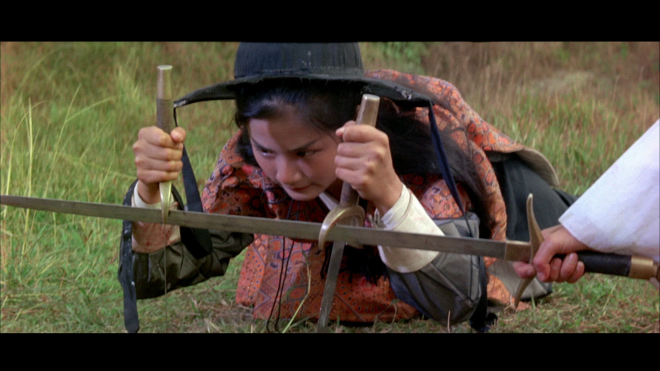 Come Drink With Me is more or less par for the course for this style film in terms of plot and storyline. There’s always a revenge angle, there’s almost always a dastardly bandit up to no good, and there’s usually some cartoonish buffoon who’s a better fighter than they’d appear to be. But the checkmark I always like for films like this is the unassuming badass that the bad guys grossly underestimate. For this outing, that character is played by the beautiful Cheng Pei-pei as Golden Swallow.

Remove the martial arts. Remove the swords and spears. Remove the time period these films are set in and the architecture for these stories is very similar to an American Western. The incorruptible U.S. Marshal deputy rides into town and takes out the villainous elements. Here, Golden Swallow is that character and instead of a six-shooter and a duster, she sports a robe and a pair of daggers. Not that she needs the blades to get the upper hand. Her introductory scene is right out of your favorite western as she casually saunters into an inn seeking information while members of the Jade Faced Tigers think they can take this lone government agent. She proves them wrong quickly.

If there’s a slight knock to Come Drink With Me it's the simple and straightforward story can be a little convoluted. About halfway through a side character with their own motivations takes centerstage. This isn’t a bad storyline to follow necessarily but it easily could have been its own movie. So for a stretch there it does feel like we’ve slipped into a different script. But thankfully it does fold back together for the big final climax with some genuine badass trampoline martial arts hijinks. 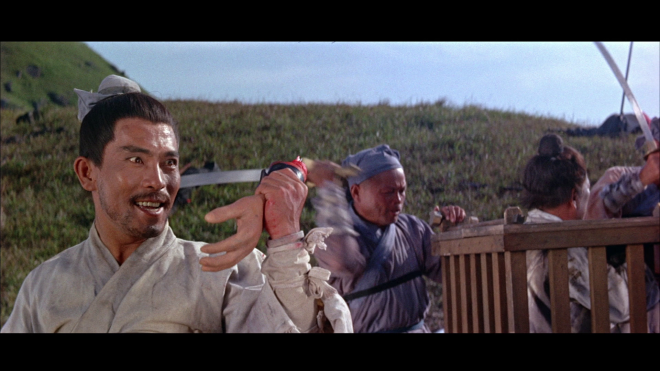 Come Drink With Me can be a pretty bloody show with torture, dismemberments, and some stabs at personal character drama. At the same time, it knows how to be fun so that it isn’t overly serious or gets too bogged down in melodrama. During the opening fight scene, you see one bandit stab a government soldier with a fountain of bright red blood splashing back at him coupled with extreme cries of pain. In the next shot, you see another bandit cut the hand off a soldier and hold up the obviously rubber-made appendage in gleeful amazement. It’s this sort of one-two punch of seriousness and playfulness that runs through the film keeping the energy high and engaging. I haven’t seen this movie in years and I’d forgotten just how much fun it was. If you’ve never seen this classic you’re in for a wild ride. If it’s been a while since you checked it out, it’s time to jump back in and revisit it.

Vital Disc Stats: The Blu-ray
Come Drink With Me comes home to Blu-ray as a Special Edition single-disc release from Arrow Video. Pressed on a BD-50 disc, the disc is housed in a standard sturdy clear case that Arrow favors for their releases with identical o-card slipcover and reversible insert art. Also included is a 42-page booklet containing images and essays about the film. The disc loads to an animated main menu with Arrow’s usual navigation system. 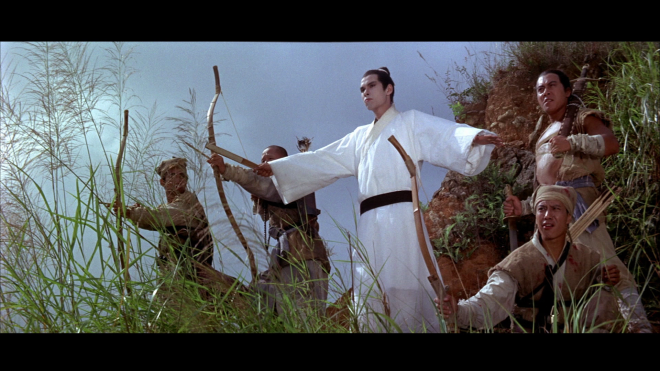 I tried to find more information about the source of the transfer for Come Drink With Me - but aside from the note in the booklet that Celestial Pictures supplied the HD master, I don’t have any info about restoration efforts or anything of that nature. Regardless, color me impressed overall. Shaw Brothers movies tend to run the gamut of quality as some were horribly mistreated in the last 50-60 years while others were put on a pedestal and well cared for. Come Drink With Me rests closer to the latter angle. There’s a terrific cinematic quality to the image with clear details and vivid colors and looks great overall. 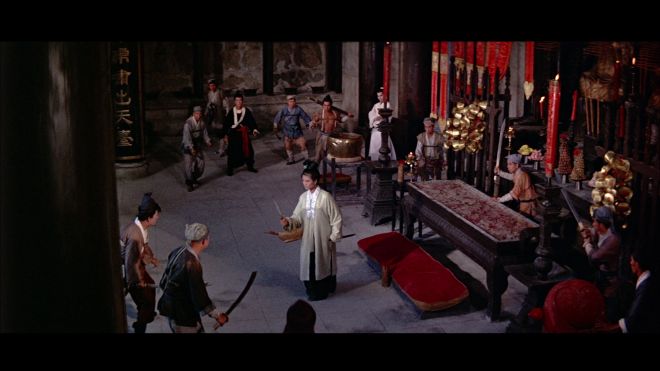 Print damage is at a minimum. However, there are what appear some insert shots from other source elements where the image is notably softer and out of focus but the next time we see that exact same angle it’s practically picture perfect again. With that, there can be some color and black level fluctuations where colors can be faded a little or some staining, and then there are a few spots of crush that come and go within a scene. I understand 88 Films released this in the UK - but I haven’t seen that disc so I don’t have a basis for comparison there. Overall this is pretty damn good, it just has cooked in issues that at this point I’m just used to seeing with 50 or 60-year-old martial arts movies. 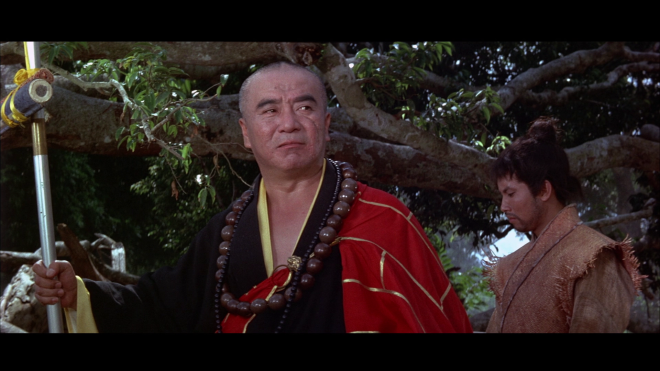 Come Drink With Me arrives with a pair of audio tracks - original Mandarin DTS-HD MA 1.0 with English subtitles or English dubbed DTS-HD MA 1.0. Both tracks work well but they’re slightly different experiences. The Mandarin sounds more authentic - the voice work is obviously more natural and less stilted and goofy sounding. But there are differences in scoring and sound effects that give each track its own edge. English dubbed versus English subs aren’t too radically different but in standard form for a movie like this, there are some segments where the dubbing doesn’t quite catch the nuance of the conversation and is a little blunt. But, I appreciate Arrow including both options for fans. 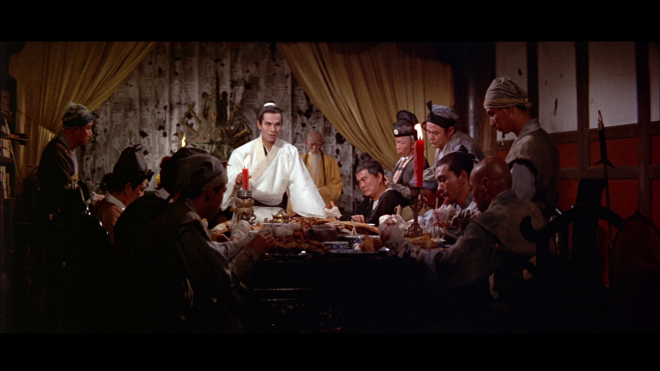 Once again Arrow doesn’t short fans of this sort of genre material in the bonus features department. They’ve assembled a pretty terrific assortment of bonus features to dig through including a Tony Rayns commentary, cast interviews, and a pretty slick documentary. 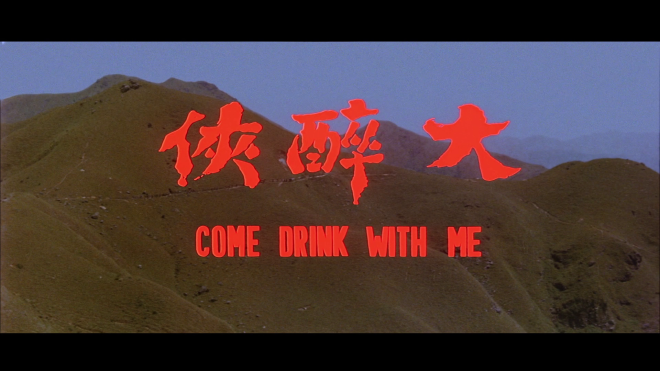 Come Drink With Me is a genuine classic in the Martial Arts genre. When you’re watching and you start to see a variety of familiar tropes and genre cliches, know those all probably started with this movie! It’d been the better side of 20 years since I saw this in school and it was a fun one to reconnect with. I’d forgotten some of the fight sequences and the big final climactic battle is a delight - but that first scene with Golden Swallow in the inn is pitch-perfect material. Arrow Video brings Come Drink With Me to Blu-ray in the U.S. for a new special edition release with a not perfect but overall pleasing A/V presentation including Mandarin and English language tracks. Top it off with some great bonus features and you’ve got a worthwhile disc in your collection. Recommended