Cybill Shepherd stars as Corinne Jeffries, a beautiful young woman whose picture-perfect marriage comes to a shattering halt when her husband Louie dies unexpectedly. Fortunately, Louie gets a second shot at life when he agrees to be "recycled" back to earth as the newborn Alex Finch (Robert Downey, Jr.) But fate crosses Alex's path twenty-three years later when he meets Corinne's daughter Miranda (Mary Stuart Masterson), and is suddenly flooded with a wealth of memories that all belong to Louie! Now, as Alex's former existence slowly comes to life, he must confront a wife who thinks he's dead, a daughter who could be his girlfriend and best friend (Ryan O'Neal) who's in love with Corinne. From Dirty Dancing director Emile Ardolino comes this heartwarming comedy that gives romance an unforgettable second chance.

Even before he was saving the world as Tony Stark and launching billion-dollar comic book movie franchises with 'Iron Man' and 'The Avengers,' Robert Downey Jr. was more than just another good looking, charismatic young actor; he was the kind of energetic, compelling presence upon which an utterly preposterous and, frankly, icky romantic comedy like 'Chances Are' could become a viable film.

The film was released in 1989, which, looking back, was clearly a heady time when vaguely supernatural body-swapping comedies were still the rage – this was just a year after both '18 Again!' and 'Vice Versa' proved audiences loved the idea of old men literally donning a newer, younger face to reclaim their lost vigor, or learn some sort of powerful life lesson. Evidently aware they were following in the imposing footsteps of Judge Reinhold, Fred Savage, George Burns, and the kid who played Ferris Bueller on the short-lived 'Ferris Bueller' TV series, writers Perry Howze and Randy Howze decided to one-up those films by making the body-swap part of a heavenly recycling program, in which the souls of the recently departed are sent back to the land of the living to inhabit a new body and do the whole "life" thing all over again.

Aside from the revelation that souls are apparently the kind of resource that has to be thrown back into circulation (is there a soul shortage those of us on Earth should be made aware of?), 'Chances Are' takes the aforementioned conceit a step further by having it orbit a love story between a dead guy and his widow that spans more than two decades and eventually involves said dead guy's best friend and daughter. In order to carry this out, the film begins with the nuptials of Louie Jeffries (Christopher McDonald) and his bride-to-be, Corinne (Cybill Shepherd), at which, Louie's best man, Philip Tran (Ryan O'Neal), confesses his undying love for Corinne. Louie, being the kind of upstanding, likeable guy that he is, brushes this off as both something he already knows and something that is inherently known by virtue of who is inspiring these feelings – that is: who in their right mind wouldn't be in love with Corinne? 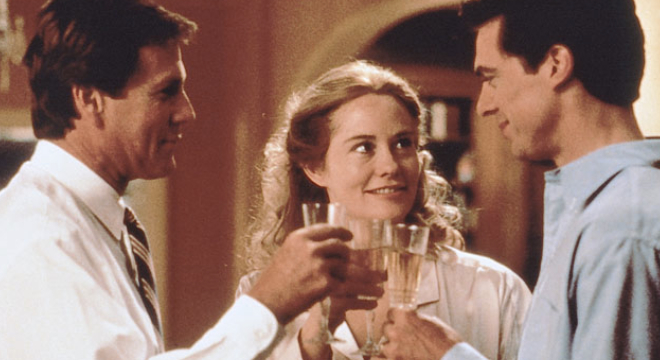 Louie and Corinne enjoy a short interval of unfettered bliss in their suburban, upper middle-class idyll before Louie is tragically struck down in the prime of his life because he can't be bothered to look both ways before crossing the street. Louie is whisked away to heaven where his impatience and desire to return to Corinne causes him to skip ahead in the reincarnation line, without being properly inoculated against remembering his past life. Jump forward twenty-three years later, where Alex Fitch (Robert Downey Jr.) is graduating college and finding himself mildly infatuated with fellow student Miranda Jeffries (Mary Stuart Masterson). As luck would have it, Alex finds himself in the company of Philip Tran, after trying unsuccessfully to get a job at the newspaper Philip works for. Alex is then invited over to Corinne and Miranda's for dinner, where Louie's memories begin to flood Alex's mind, and he has the sudden realization of whom he truly is.

That's actually a fairly cute premise for any movie about the virtue of true, undying love, as it pits the notion of a superficially May-December romance against certain societal norms, while also exploring the idea that true love does not necessarily mean one and only one love. Naturally, that has to do with Philip's unrequited love for Corinne that he's quietly harbored for more than two decades, but also, disturbingly, it has to do with the notion that Alex and Miranda are a perfect match for one another. This is the kind of precious conundrum that completely collapses under even the slightest bit of scrutiny. And it's not even the problematic father-daughter relationship that is most troublesome, but rather the mind-blowing quandary of: Who is Alex Fitch, if not Louie Jeffries?

It would be one thing if Alex had simply been granted Louie's memories as some sort of informational screw up, but the existential conundrum is that Alex is Louie. If that's true then was Alex a unique individual before recalling Louie's memories, or was he latently Louie all along? Is the implication of the film that the true essence of a person is locked away in memory, and by deleting those memories an individual ceases to exist?  And if you have seen the film and recall the denouement, then you have to wonder what the hell happens to Louie and, conversely, what happened to Alex while Louie's memories were dictating his emotions and reactions? All of this is in conjunction to the question of: How is Corinne okay with her daughter essentially shacking up with a body that was (still is?) occupied with the soul of her dead father. Sure, it's a cute movie, but damn if it isn't also an existential nightmare.

What's most remarkable, however, is that despite all the confounding questions left swirling around the story, and the fact that it leaves the narrative in a weird and, let's face it, incestuous place, is that the film comes off as a charming (but still disconcerting) love story. It's been twenty-five years since 'Chances Are' came out, and while it is worth noting as a look back at the career of a man who would become a superstar, the movie may deserve a closer look for just how many weird philosophical questions pop up that are never directly answered or really even examined in the slightest way. 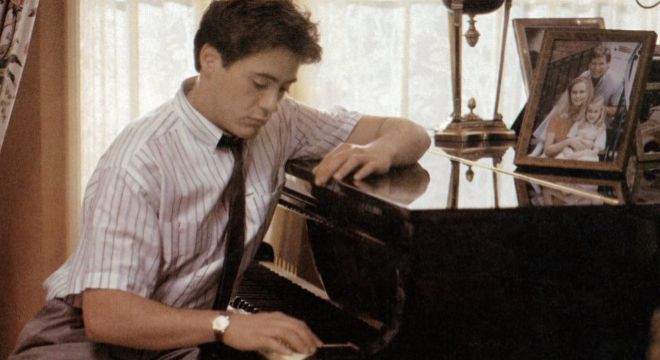 'Chances Are' comes from RLJ Entertainment as a single 25GB Blu-ray disc in the standard keepcase. The disc does not contain any previews ahead of the top menu, nor are there any special features included here.

To say that the 1080p AVC/MPEG-4 encoded transfer of 'Chances Are' is a disappointment would be putting it mildly. It's hard to say exactly where the source for the transfer came from, but whoever found it should probably have looked a little harder. The image is soft from beginning to end, featuring an image that is not only lacking in fine detail, but also contains a tremendous amount of grain and noise that honestly shouldn't be there in a film that is only twenty-five years old. Early on, the slightly hazy quality of the image seems to fit with the notion that film is taking place in the past, setting up the story of Louie and Corinne as something almost out of a dreamscape or, more likely, a memory. Sadly, when the film jumps forward to then-present day D.C. the detail does not improve at all.

Most of the film remains under noticeable haze, and while there are some instances where close-ups offer more detail, they don't offer anything close to what would be expected from a high definition upgrade to a film that certainly wasn't obscure. In that regard, along with the aforementioned lack of detail and abundance of noise, there is an occasional issue with the contrast, where white levels appear blown out at times.

Overall, this is a substandard offering for a film that is being released for its twenty-fifth anniversary.

While the image on 'Chances Are' is a resounding disappointment, the sound offers something more robust and worthwhile. The DTS-HD Master Audio 2.0 mix presents the dialogue clearly and with a consistent level of atmosphere that helps generate a more compelling sense of immersion. The mix handles larger audio elements quite well, as is demonstrated in certain scenes featuring large crowds, like the museum fundraiser and the courtroom scene near the end. These moments are balanced against the needs of the dialogue to generate a surprisingly strong listening experience that is much more dynamic than one might expect.

Moreover, the mix handles the musical elements like Peter Cetera and Cher's Academy Award-nominated song 'After All' with gusto, as well as several other offerings from pop music at the time. It's not a stupendous mix by any means, but it is an above average offering that does a far better job of moving the film into the world of HD than the image does.

'Chances Are' does not contain any special features.

This is the kind of film that is enjoyable on a first pass, but essentially crumbles under the slightest hint of scrutiny. Downey Jr. and Christopher McDonald are in top form here, though, while Cybill Shepherd does a commendable job making the problematic aspects of the story seem far less troublesome than they really are. That's a lot of heavy lifting to do for a film that shouldn't raise as many existential questions as it inadvertently does. The problem, however, is that the picture is of poor quality, and the sound, while good, isn't going to blow anyone away. This is already recommended for fans only, but if you've already got the DVD, there's not much reason to upgrade.

Sale Price 17.94
Buy Now
3rd Party 6.94
In Stock.
See what people are saying about this story or others
See Comments in Forum
Previous Next
Pre-Orders
Tomorrow's latest releases