The Whip and the Body

Marred by controversy at the time of its release, this horror fantasy from Italy's legendary horror director Mario Bava centers on the twisted desires of a nobleman's son (Christopher Lee). Lee is ostracized by his father for his dalliances with a servant girl (who later commits suicide), but is allowed to return to the fold by his brother, whose lovely wife (Dahlia Lavi) immediately becomes the object of Lee's mad lust. Lee is later found murdered, along with several other victims from the surrounding village, leading superstitious locals to believe that Lee's evil spirit has returned to destroy them; the twist ending reveals the real evil at work. Uncut, Unrated European Version!

Today, Mario Bava is mostly remembered and often regarded as a filmmaker of Italian gore and the giallo, and most audiences are only familiar with movies such as 'A Bay of Blood' and 'Black Sabbath.' While both films certainly have their merits and are rightly enjoyed by horror buffs, fans should not disregard his other, lesser-known works, particularly those fantasy sword-and-sandal epics which were popular during the early part of his career. I'm thinking here of 'The Giant of Marathon,' 'Hercules in the Haunted World' and 'Erik the Conqueror.' Even then, these films are not widely considered among his finest efforts. That honor goes to 'Black Sunday,' 'Blood & Black Lace' and to a lesser extent 'The Girl Who Knew Too Much,' a stylish thriller with elements of sexploitation.

'The Whip and the Body' is another of Bava's features often appreciated as among his finest, a snazzy brooding supernatural flick with stunningly elaborate and ornate production design by Ottavio Scotti and Riccardo Domenici. Set inside and around a darkly gloomy castle estate on the edge of a cliff overlooking the ocean, audiences are endlessly escorted throughout manor, a creepy Baroque maze of sinister-looking narrow wooded hallways, dank murky bedrooms smelling of something foul and infernal, and wide open parlors with large fireplaces as the only source of light. The quality of the work that went into creating each scene is all the more appreciated when conversations are fueled by resentment and vaguely hinting to past wrongdoings, as if at any moment someone is about jump into a murderous rage.

Added to that, the filmmakers saturate the melodrama and action with a striking arrangement of shadows and small blocks of vivid pastel hues. And this is done mostly to the faces of the cast, using mostly the fill light slightly angled from above while the key light is minimal and dim. With the backlight just at the point of being completely off, this gives every actor a sense of despair and misery, making even the female characters capable of murder. Bava, who originally started his career as a cinematographer, worked closely with camera operator Ubaldo Terzano to give the film a distinctly macabre look and feel. It's rather remarkable the consistency at which they are able to maintain this gothic appeal which is as beautiful and arresting as it is eerily ghoulish with a morbid aura writhing beneath. 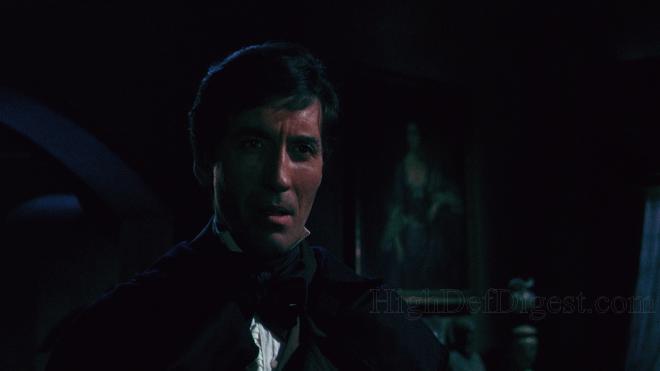 Continuing the film's uniqueness and chilling eccentricity, the script by Ernesto Gastaldi, Ugo Guerra and Luciano Martino follows an intensely grave and morose Kurt Menliff (Christopher Lee) as he returns to his family's estate after being accused of murdering his deceased wife. Played by a relatively young and somber Lee, who only a few years earlier found success with Hammer Films and a pair of Sherlock Holmes adaptations, the story is a shockingly disturbing — for 1963 audiences, that is — and bleakly sullen tale about suspicion between family members. The Count (Gustavo De Nardo) wants nothing to do with his son, Christian (Tony Kendall) doubts his brother's return is honorable, and Giorgia (Harriet Medin) has no qualms exacting vengeance upon her son.

However, the real meat and potatoes of this gothic mystery is Kurt's unsettling obsession with his sister-in-law, Nevenka, played by the beautiful Daliah Lavi, who later starred in the spy spoof 'Casino Royale (1967).' The abusive and domineering Kurt has an unpleasant sadomasochist relationship with the young woman where he repeatedly flogs her with a horsewhip, tearing the skin on her back. Adding to the shock value, 'The Whip and the Body,' aptly titled considering the subject matter, explores the bond of violence and sexuality, unabashedly sensualizing Kurt's behavior though it still maintains a nightmarish appeal. Taking into account the year in which it was released, Mario Bava's film is a rather astonishing feat, made all the more interesting by the stylishly gothic and macabre atmosphere he inundates the delightful mystery tale.

Kino Lorber brings 'The Whip and the Body' to Blu-ray as part of the distributor's "The Mario Bava Collection" line. Housed inside a regular blue keepcase, the Region A locked, BD50 disc goes straight to a static main menu with music playing in the background.

As is customary of most Kino Lorber releases, the Bava horror classic haunts Blu-ray with an "as-is" presentation that's both a welcome and a disappointment. Overall, the 1080p/AVC MPEG-4 encode is very dark and dim. Of course, the film is supposed to be gloomy and moody, but nearly every scene is engulfed in deep shadows that obscure even those details which are meant to be visible. The source also shows the mildly rusty, yellowish tint that only comes with age, along with scratches, vertical lines and a few splatters of white specks. Bathed in a thin layer of natural grain, the 1,78:1 image displays bland, below average contrast, which along with the deep blacks makes the overall color palette seem a tad faded and weak. Fine lines are decently defined, but the movie needs a full restoration.

In the audio front, Kino offers fans three listening options: Italian, English and French, all in uncompressed PCM stereo. Of the three, the Italian is definitely the strongest and preferred soundtrack, as it generates a good sense of presence and a soundstage that feels most natural and appropriate. Background activity, particularly the wind constantly blowing, is audible throughout, nicely complementing the film's atmospheric mood. Dynamic range, however, is generally flat and uniform with mild hints of distortion and noise while greatly lacking in the low-end. The other two lossless tracks seem to have been cleaned extensively, coming across flatter and duller while erasing many of the subtleties in the design, especially those moody background sounds. Nonetheless, all three deliver clean, well-prioritized vocals in the center, despite the obvious ADR work.

Despite his name being commonly associated with Italian gore and the giallo, Mario Bava really did his finest work in the early part of his career, and 'The Whip and the Body' is evidence of that. Somberly moody, eerily atmospheric and very macabre, the Italian gothic classic is beautifully made film that mesmerizes and comes with a plot that's rather shocking for the period. The Blu-ray arrives with an expected but still somewhat disappointing picture quality, but things improve slightly with three lossless audio presentations. With only one worthwhile supplement, the overall package should attractive fans of the director and Italian horror cinema.

Sale Price 17.99
List Price 24.95
Buy Now
3rd Party 17.48
In Stock.
See what people are saying about this story or others
See Comments in Forum
Previous Next
Pre-Orders
Tomorrow's latest releases