Overview - One of the first films to examine the aftermath of post- 9/11 New York City, Reign Over Me shows how much even indirect contact with those who lost loved ones in the tragedy can greatly affect. Like rings of debris spiraling out from an explosion, Charlie Fineman's (Adam Sandler) loss also devastates his in-laws, who he refuses to speak to, and ex-college roommate, Alan Johnson. Reign Over Me stars Johnson, a successful dentist with a gorgeous wife, Janeane (Jada Pinkett Smith) and two kids, who finds Charlie reverted back into a teenage wasteland, unable to face his unbearable sadness. Sandler as Charlie looks like Bob Dylan and acts like Dustin Hoffman in his great dramatic performance. Listening to The Who and The Boss through headphones, playing video games, and continually remodeling his kitchen, Fineman's escapism disturbs Johnson, who, in turn, feels squelched by his stiflingly normal lifestyle. As the two reacquaint, Johnson is the only person who can help save Fineman from self-obliteration.
OVERALL
Worth a Look

More than a half-decade since September 11, 2001, attempting to create a commercial film that deals with the events of that day remains a moral minefield. How do you depict and dissect the aftermath without exploiting or manipulating the audience's emotions? And is it even possible to sensitively tend to such a still-open wound in our collective consciousness without resorting to melodrama, mawkish sentimentality, or over-reverence?

'Reign Over Me' makes an admirable attempt to do just that. But rather than follow the tactics used before 'World Trade Center' and 'United 93,' two very fine films about 9/11 that focused almost exclusively on the events of that day, 'Reign Over Me' is rooted in the present -- long past the point where 9/11 is incomprehensible. The film then takes the played-out genre of the buddy picture and merges it with light comedic fantasy. The result is a compelling allegory that, while flawed, is heartfelt and perceptive.

Barely alluding to the World Trade Center or the victims, the script presents us with Charlie Fineman (Adam Sandler), "the man whose family was on the plane." He has purged the loss from his mind, retreating into a world of near-madness by suppressing any memory of his deceased wife and two daughters. Once a dentist, he now lives off a life insurance policy, whiling away his days searching for vintage LPs and riding around on a scooter.

Alan Johnson (Don Cheadle), his ex-roommate during dental school, runs into Charlie one day. Alan still has the life that Charlie lost: a beautiful wife (Jada Pinkett-Smith), two young sons, a thriving career, and financial stability. Although he is startled by what has become of Charlie, Alan attempts to break through his friend’s depression and violent outbursts, eventually staging a failed intervention with Charlie’s estranged family. Only after more unexpected tragedy and with the help of a considerate therapist (Liv Tyler) will Alan finally be able to push Charlie into grieving for his family.

Despite its compelling premise, not everything works in 'Reign Over Me.' Tonally, the movie can be disjointed. Writer-director Binder's surprisingly light touch in the early scenes plays almost like Frank Capra fantasy, especially in the way that the city's nightscapes are painted with light and in the film’s sublime use of music to hint at surrealism. But while this unique approach was likely designed primarily as a commercial concession to Sandler's well-known comedic persona, it also results in a sense that Binder is trying to distance us from the natural drama of the story, as if he doesn't believe the audience can handle the raw emotions that we have about 9/11.

Happily, the interaction between Cheadle and Sandler forms the heart of the film, and their performances help even out Binder's tonal shifts. Cheadle has always been an actor with great range, and he is able to make even his character's most implausible decisions ring true. Sandler actually has a more difficult job than Cheadle, however, because his goofy persona brings with it such baggage that we are already expecting him to fail in any dramatic performance he attempts. But Sandler's comedy has always been infused with a barely-contained rage (particularly in 'Punch-Drunk Love' and 'Click'), and he finds the correct balance here between pain and pathos. His Charlie is a fully-realized, nuanced creation and the actor's finest so far.

Although it is a film of small pleasures, 'Reign Over Me' ultimately emerges as a haunting evocation of one man's coming to grips with grief that tactfully acknowledges our nation's collective anguish. The film may be uneven and it certainly lacks the kind of soaring emotion that likely would have garnered it a bit more commercial success, but if you're looking for a perceptive "little" picture, 'Reign Over Me' is an experience that’s almost sure to resonate. 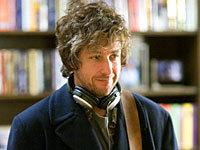 Shot entirely on PanaVision HD cameras and then transferred to 35mm film, 'Reign Over Me' is presented here in 1080p/AVC MPEG-4 video. The combination of HD origination and a 35mm source gives 'Reign Over Me' a film-like look, but also a very clear, pristine sheen that is surprisingly harmonious.

Though the source does have a faint whiff of that "shot on video" vibe (thanks to flat shadow delineation and blooming whites), generally it retains a naturalistic feel. The image is always sharp and dimensional, with rich blacks and excellent depth in nearly every shot. Colors are also striking, even if the deep hues are sometimes so intense that they teeter on the edge of over-saturation. Fleshtones can also suffer sometimes due to the heavy use of blue and green filters for the night-time scenes. As is often the case with shot-on-video material, noise can be also be a problem, especially in low-light shots, where it often obscures detail. Still, for a fairly low-budget, intimate drama shot entirely on HD, this presentation of 'Reign Over Me' is generally quite pleasing.

The intimate nature of 'Reign Over Me' benefits greatly from its restrained sound design. This uncompressed PCM 5.1 surround track is easily up to the task, nicely supporting the film without overpowering it.

Essentially a character piece, 'Reign Over Me' has no action in the traditional sense of the word. Thus, the surrounds are rarely active, if ever. There is slight ambiance to the New York exteriors and some of the club/music moments, but it's minor. The few discrete effects are keyed-down in the mix and never call attention to themselves. Instead, the dialogue and general sense of reality are what matters on this track, and both are quite effective. Don't expect any sonic fireworks from 'Reign Over Me,' but considering the nature of the material, the audio here is just right. 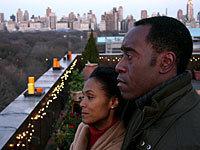 Given the muted reception that greeted 'Reign Over Me' at the box office, it's not surprising that Sony has not produced an expansive set of supplements for the film's debut on Blu-ray and DVD. You won't find an audio commentary or any deleted scenes here, but at least the three features we do get are presented in immaculate 1080p/MPEG-2 video.

Perhaps to make up for the lack of a commentary, the 16-minute featurette "Behind the Reign" is really just a one-on-one conversation with writer-director Mike Binder. It's concise and comprehensive, chronicling the germ of the idea that led to the movie (Binder was at ground zero the morning of 9/11), the key story elements, the cast, the shoot, and finally the wrap.

"Jam Session with Don Cheadle and Adam Sandler" is just that -- a 5-minute outtake featuring the two actors riffing on their guitars. Not bad, but they shouldn't give up their day jobs just yet.

Finally, "A Still Reign" is a 6-minute montage of behind-the-scenes and publicity stills from the movie (about three dozen in all). Though a bit of commentary from Binder would have been nice, this one's still well-executed and edited, complete with Pearl Jam's cover of the Who's "Love, Reign O'er Me" for underscore.

Rounding things out are a few trailers for other Sony Blu-ray titles, including 'Spider-Man 3,' 'Click,' 'Paprika' and 'Superbad.' Unfortunately, there is no trailer for 'Reign Over Me' included.

The first mainstream post-9/11 drama to deal with the tragedy's longer-term effects on its survivors, 'Reign Over Me' is not entirely successful, but it is perceptive and at times quietly moving. The film is well-represented on Blu-ray, with a very fine transfer, a suitably restrained soundtrack, and even a few worthwhile extras. Definitely worth a look.

Sale Price 8.76
Buy Now
3rd Party 1.93
In Stock.
See what people are saying about this story or others
See Comments in Forum
Previous Next
Pre-Orders
Tomorrow's latest releases