The men behind the greatest film studio of the 1980s Yoram Globus and Menahem Golan deliver the bizarre and wildly entertaining Israeli-made Spaghetti Western God’s Gun. Starring Lee Van Cleef and a horribly dubbed Jack Palance with Richard Boone and Sybil Danning, in true Golan/Globus form, the film knows the pieces of great Spaghetti Westerns but doesn’t know how to use them with this daffy plot and over-the-top performances. Kino Lorber Studio Classics unearths this film for Blu-ray with a solid video transfer and serviceable audio considering the source. Worth A Look

Father John (Lee Van Cleef) is a man of peace. But he wasn’t always. Trained at a young age to handle a gun, he gave up a life of taking souls in order to save them. When gunhand Sam Clayton (Jack Palance) rides into town after a major score with his gang and starts terrorizing the locals; peaceful Father John ends up on the wrong end of a bullet. But John has a twin brother Lewis (Lee Van Cleef), and he isn’t as peaceful as the dealy departed - and is faster with a gun than anyone.

Ever watch a movie that is desperately trying to be like another movie to the point you can visualize the filmmakers' scribblings notes in a darkened theater about what they think makes the film great? That’s God’s Gun. Before Golan and Globus turned Cannon into the churn and burn action movie machine, they tried their hands at making a wide range of films. As the era of classic Spaghetti Westerns was coming to a close, they decided to toss their hands into the ring. They got some memorable stars of the sub-genre - Lee Van Cleef and Jack Palance. They even hired director Frank Kramer a.k.a. Gianfranco Parolini of Sabata, Adios Sabata, and Return of Sabata to helm the ship. By all accounts, this movie was a mess from the first day of shooting.

Cast and crew regularly quit the film so characters that were previously established simply disappear. Depending on which version you get, either Lee Van Cleef, Jack Palance, Richard Boone, or all three of them are dubbed terribly or blather about in Italian even though everyone else is speaking English. In this particular case, it’s Jack Palance that’s very clearly dubbed over - and it’s just odd to hear someone else’s voice coming out of that face. It's extra strange since it sounds like someone doing a bad Palance impersonation. Even weirder is it sounds like there are some scenes where it is Palance's voice but then that very odd out of place dubbing comes right back. 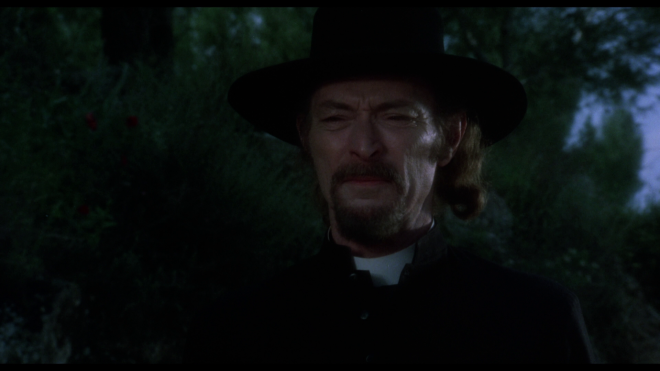 The first half of the film starts out strong enough and builds to a compelling story for revenge. Lee Van Cleef is his usual badass self. Even if it’s not his voice Jack Palance looks like he’s having a good time as the man-in-black villain. Where the film goes off the rails is when Palance’s Clayton suddenly becomes the main character. Revelations about his past, an old flame, a son he didn’t know about, and growing conflict with his gang give Palance more to do than being a simple bad guy. But then right when the film remembers it’s a revenge film and Van Cleef was the star, half of Clayton’s gang just disappears and the show goes in a pretty weird direction for its climax. Granted it's a lot of fun to watch Van Cleef do his revenge thing dolled up like his ill-fated brother, but more often than not you'll be looking at this film with a look of quizzical disbelief than astonishment at the film's plot twists and execution. 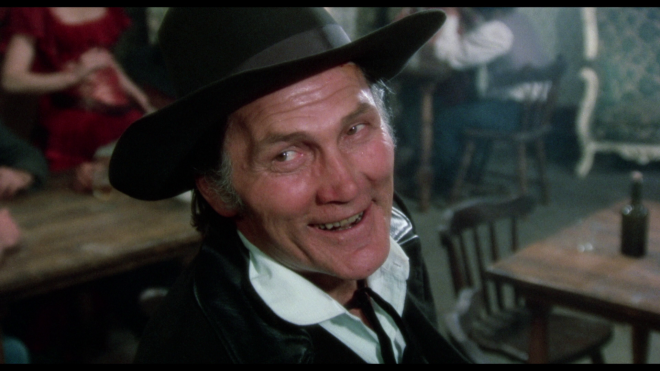 Not altogether terrible, God's Gun is just the bizarre outcome of an out-of-control production. It’s trying to do way too much for its own good and only succeeds in small areas with a few choice scenes. You can see the production struggle as characters come and go with incomplete scenes that just collapse into the next edit. Van Cleef gives enough of the steely-eyed stare to prove he’s still a badass, but even playing two characters he has long stretches with little to do. I’m always game for a Western, I love discovering new gems I never knew existed. Sometimes you get some real stinkers that don’t live up to potential. Then you get oddballs like God’s Gun that make no sense but you can’t look away. Don’t expect greatness, embrace the confusion, and enjoy the odd dubbing!

Vital Disc Stats: The Blu-ray
God’s Gun arrives on Blu-ray thanks to Kino Lorber Studio Classics. Pressed on a Region A Locked BD-50 disc. The disc is housed in a standard case with reversible insert artwork. The disc loads to a static image main menu with traditional navigation options. 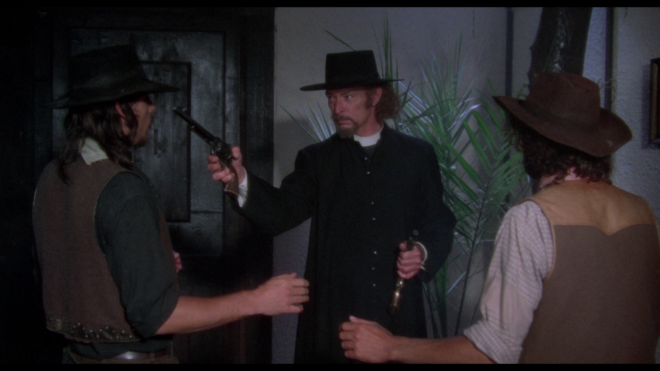 Sourced from a new 2K master, God’s Gun is actually a pretty damn good looking flick. While the production sounds like it was chaos the film itself looks impressive. Using the scenic Israeli locations, the exterior western town facade, and elaborate interiors show some real money was spent on this film. Details of the new master show fine textures, facial features, and highlight those production design efforts. Film grain is a little noisy in places, some shots more so than others, but overall it maintains an organic appearance. The main issue with this transfer is what looks like dupe film elements were used for certain shots. Some cuts are much softer with more wear and tear than adjacent shots within the same scene so quality can shift a little throughout the run. Not horribly distracting but not hard to miss either. When it looks great it looks fantastic. When it’s rough, you can feel the years working on the source elements a bit more. Colors are vivid with bright primaries and healthy skin tones. Black levels are pretty decent, some hits of crush in the day-for-night shots but nothing horrible. 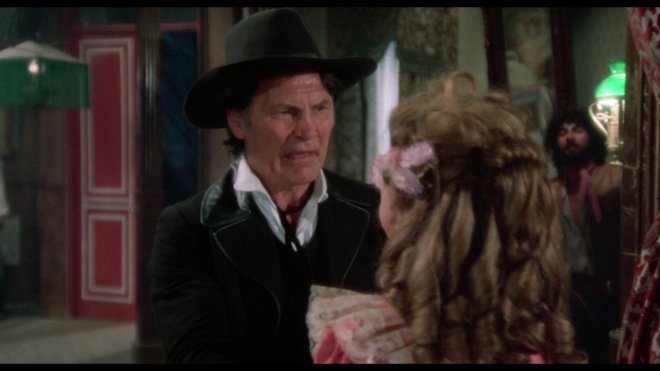 Well, it wouldn’t be a true Spaghetti Western if the audio didn’t sound a little funny and this DTS-HD MA 2.0 track is no exception. As I mentioned in my review there are several versions of this movie with different dubbing for various actors so depending on who is talking, the mix can be a bit wonky. Dialog has a stilted airless quality a lot of the time. There’s a lot of dubbing in this mix but the most obvious example is whoever dubbed the voice for Jack Palance. Action sequences in the desert are handled well and action sequences are energetic with a wide range of canned sound effects. Overall sound effects and the appropriately jangly score are effective and dialog is audible. As should be expected, more care and attention are given to gunshots. Pretty par for the course for a film like this. 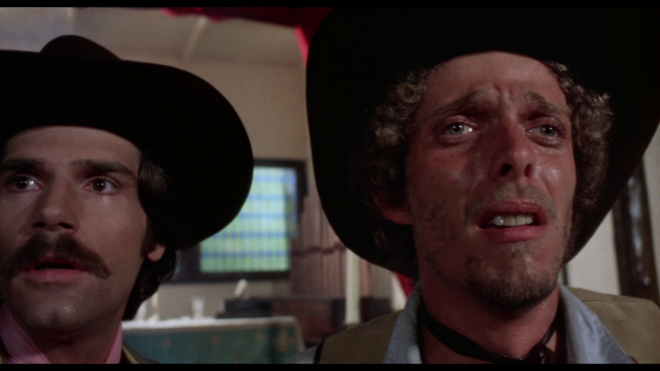 Not the biggest batch of bonus features ever assembled but filmmaker Alex Cox delivers an audio commentary about this film. After that is the standard collection of trailers. 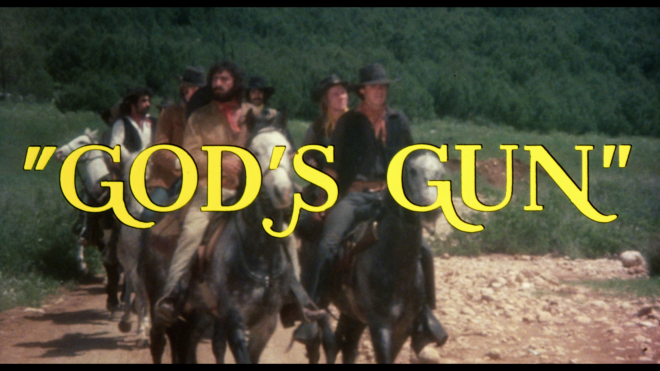 In a traditional sense, God’s Gun is not a great movie. On the lower end of the spectrum for the sub-genre, but through it all, it's still fun. Made by Israeli producers Menahem Golan and Yoram Globus with an Italian director and none of them spoke each other's language - what could go wrong? It sounds like just about everything! The basic story is there and Lee Van Cleef does his best to anchor the show, but the horribly dubbed Jack Palance oddly takes center stage as the film struggles to figure itself out. KLSC delivers a solid Blu-ray release with a strong video transfer, decent audio for all things considered, and a worthwhile commentary track to round out bonus features. Worth A Look