Dr. Henry Jekyll experiments with scientific means of revealing the hidden, dark side of man and releases a murderer from within himself.

With so much to love and admire already in John S. Robertson's 'Dr. Jekyll and Mr. Hyde,' the film is all the more revered and immortalized for the work of the astonishing John Barrymore. A few years shy of a century, his dual performance as the kindly, benevolent Dr. Jekyll and his depraved alter ego Mr. Hyde remains as captivating as ever, a paragon of the screen for future generations to continue marveling at and want to emulate. Using hardly any special effects and little makeup — this is a couple years before Lon Chaney astounded the world with his talent — the transformation scenes are a speechless wonder, as the legendary actor of the stage contorts and distorts his face into a vile, wretched man.

The success of this 1920 horror silent classic stands on the shoulders of Barrymore's performance, which continues to amaze today. Granted, there are other aspects of the production equally deserving of attention, but when all is said and done, it is Barrymore who stands apart and ultimately sells the plot. He alone convinces audiences that the charitable and progressive Jekyll who donates his free time from scientific research to provide medical attention to the underprivileged is capable of having a dark side. After explaining to friends and colleagues of a stranger having access to Jekyll's home and laboratory, the despicable Mr. Hyde who only acts on emotion and instinct — as opposed to Jekyll's more logical and reasonable side — shows up to create chaos in his life.

Loosely based on the novella by Robert Louis Stevenson, with elements borrowed from Thomas Russell Sullivan's 1887 stage adaptation, the plot weighs on the various levels of morality and our most human base instincts. A big part of my love for the film comes from the script, which Sullivan co-wrote with Clara Beranger, taking a moment to comment on this highly intriguing concept. And in fact, the filmmakers use this as the pivotal point when Barrymore's humanitarian idealist is persuaded to unlock his inner demon. Sir George Carew (Brandon Hurst), father of Jekyll's fiancée Millicent (Martha Mansfield), prods and derides his future son-in-law for his altruistic pursuits in front of Edward Enfield (Cecil Clovelly), Dr. Lanyon (Charles Lane) and Utterson (J. Malcolm Dunn). 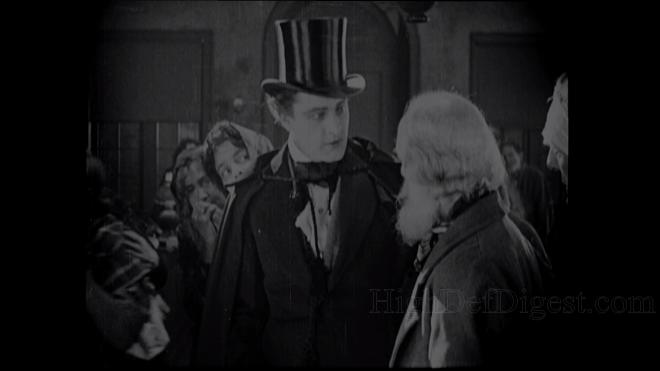 I love that the two men debate, however simplified, the philosophical question of measuring one's goodness by how much the person consciously denies his or her natural, selfish urges. Carew is of the mind that it's impossible to be wholly virtuous without at least tasting one's weaker self while Jekyll, of course, believes there's no need to indulge self-interested goals in order to follow a righteous cause. To prove his point of giving in at least a little to impulses, Carew interestingly moves his high-society dinner party to a seedy dance hall where Italian performer Gina (Nita Naldi) ignites the flames of temptation in Jekyll. After drinking his experimental potion, the young doctor becomes a womanizer, drug user and a drunk, satisfying deep hiding desires that grow into addiction.

This is probably where 'Dr. Jekyll and Mr. Hyde' is at its most intriguing and fascinating. The grotesquely impulsive and unpredictable Edward Hyde slowly takes over not because he's the dominant personality or Jekyll too weak to control him, but because as a whole, the man falls into that terrible pit of addiction. Even the most honorable of men can be ruined by a dependency to a debilitating habit. And Robertson does splendid work behind the camera, patiently exploring these themes while also allowing Barrymore to shine on screen. Particularly amusing is how the camera pushes close on Hyde's face as if thrusting the creepily horrifying and disfigured character at the viewer, making this silent film a genuine classic of the genre that still entertains nearly a century later.

Kino Classics brings 'Dr. Jekyll and Mr. Hyde' to Blu-ray on a Region Free, BD50 disc inside the standard blue keepcase. At startup, viewers are taken directly to a static main menu with music.

Although made from archival 35mm elements, the horror silent classic arrives to Blu-ray with a rather disappointing 1080p/AVC MPEG-4 encode that only serves to demonstrate how much the film is in desperate need of a full restoration. Presented in its original 1.37:1 aspect ratio, the picture is terribly soft and blurry with only a few instances of good resolution and definition. On average, contrast and brightness levels are well-balanced with deep, rich blacks that penetrate the image. Sadly, the worst parts come with overblown whites that further ruin the finer details. The rest of the high-def transfer is littered with the usual white specks, dirt and vertical scratches. The video is still watchable, but it could be much better.

Offering a much better presentation is a terrifically engaging uncompressed PCM stereo soundtrack. With a performance by the Mont Alto Motion Picture Orchestra, Rodney Sauer's score is presented with excellent depth and emotion. The soundstage delivers distinct clarity in the highs, allowing every note in the string section splendid fidelity and precision while the piano packs weight and presence in the mid-range. There are a couple instances of very mild distortion and brightness, but thankfully, it doesn't take away from the lossless mix's overall enjoyment.

With so much to admire in John S. Robertson's 'Dr. Jekyll and Mr. Hyde,' the silent horror classic is all the more revered and immortalized by the astonishing performance of John Barrymore as the titular characters. The Blu-ray from Kino Lorber arrives with good but badly aged picture quality. However, the audio presentation and supplements make the overall package worth a look for fans of the era and genre.

Sale Price 19.93
List Price 34.95
Buy Now
3rd Party 25.52
In Stock.
See what people are saying about this story or others
See Comments in Forum
Previous Next
Pre-Orders
Tomorrow's latest releases